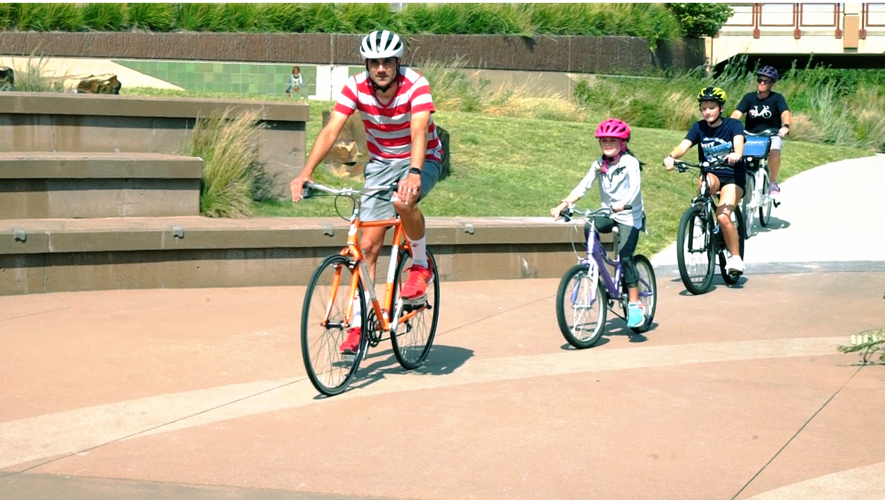 A family dons helmets for a safe bike ride through one of the many hiker/biker trails in Lincoln's city parks.

It’s almost May, and you know what that means – it’s all about bikes. And nothing is better to escape the doldrums and confinement of the pandemic than the wind in your hair (well, metaphorically anyway, since you need to wear a helmet) as you pedal down the street or a bike trail.

You don’t have to be a part of the spandex crowd to enjoy biking. It is low-impact, so it causes less injury and strain on joints than many forms of exercise.

May is National Bike month - and Lincoln is itching to continue its national dominance as a biking city. Last year, during the 2021 National Bike Challenge (May 1 through Sept. 30), Lincolnites logged 458,503 miles, giving us a top finish in the category for cities our size and third place nationwide behind Portland and Atlanta. In numerous preceding years we’ve ended up in first place, beating cities like Chicago, Atlanta, Portland and Philadelphia.

May 1 is National Ride a Bike Day - Celebrate spring and the outdoors by riding a bike at your own pace, either for fun, to run an errand or on a commute.

Every Thursday in May: Tour de Lincoln - Hosted by the Great Plains Trails Network (GPTN), this free event showcases trails in all four quadrants of Lincoln. The four separate rides begin at 6 p.m. every Thursday in May at the Jayne Snyder Trails Center, 21st and Q streets. If you’re having fun, keep up the momentum with Trail Trek, another event led by GPTN in June that features four rides ranging from 10 to 44 miles. Each participant receives a shirt, a water bottle (first 1,000 entries), on-trail water and snacks, and lunch at Speedway Village. For more information about Tour de Lincoln or Trail Trek, visit gptn.org.

May 15-22 is Bike to Work Week 2022 - Bike to Work Week will include a week’s worth of activities to support bicycling to work including safety classes, a bike tour, events and prizes. Check Lincoln.ne.gov, keywords bike events for details. Look for various discounts available from participating businesses and vendors posted on the city Bike to Work Week Event page closer to the event week.

Celebrating National Bike Month on Lincoln’s Streets and Trails - Lincoln has been working hard to make biking in the city safer and easier. As part of the Lincoln Bike Plan, which identifies an on-street bicycle network that builds on the city’s extensive trail network and provides safe and low-stress bicycle commuting and recreational opportunities, Lincoln Transportation and Utilities (LTU) opened its first “bike boulevard” in the fall of 2021. Bicycle boulevards are residential streets that provide a safe and comfortable environment for people bicycling, walking and driving. The goal is to help create and maintain quiet neighborhood streets that benefit and improve the safety of all road users and discourage speeding and cut-through traffic as well.

The new F Street bicycle boulevard stretches from Sixth Street from G to F streets, and along F Street from South Sixth to Southwest Second streets in the South Salt Creek neighborhood. This bicycle boulevard provides easy access to the Jamaica North Trail between Fourth and Calvert streets to a half mile south of Saltillo Road, the Salt Creek Levee Trail from Haymarket Park to the Jamaica North Trail near Calvert Street, and Cooper Park near Eighth and D streets. The bike boulevard joins the N Street cycle tracks in creating safer biking opportunities on Lincoln’s streets.

Happy Trails to You - Along with the N Street cycle track and the new bike boulevard, Lincoln has over 134 miles of hard surface and crushed rock trails, letting you get just about anywhere you want to go using both on- and off-street routes. There are also several miles of hiker/biker trails within Lincoln’s parks. So get that bike out of the garage, strap on your helmet and hit the road. You’ll be glad you did.

Partnership for a Healthy Lincoln (HealthyLincoln.org) and LNKTV Health (LNKTVhealth.lincoln.ne.gov) bring you Health and the City, a monthly column that examines relevant community health issues and spotlights the local organizations that impact community wellness. Direct questions or comments to jpearsonanderson@healthylincoln.org.

Most entertainers or media members adhere to a simple recipe for success. “Stay true to yourself.” And in Nebraska you might add, “show humility.”

Lincoln South Rotary Club awarded two scholarships for $1,000 each at its May 13 meeting.

When preparing to list a home for sale, I always advise my sellers to focus on the three D’s … Depersonalize, Declutter and Deep Cleaning. Usu…

Metro Gallery, 1316 N St., will celebrate its 10th anniversary in June. The featured artist is William Zuch, who does seashell art. The openin…

Just weeks prior to her 100th birthday, Ruth Swanson paused last week to count her blessings:

Woods Charitable Fund’s board of directors approved grants in its spring grant cycle totaling $324,000 to 15 tax-exempt organizations at its M…

Learn how to make metal jewelry at workshop

A family dons helmets for a safe bike ride through one of the many hiker/biker trails in Lincoln's city parks.