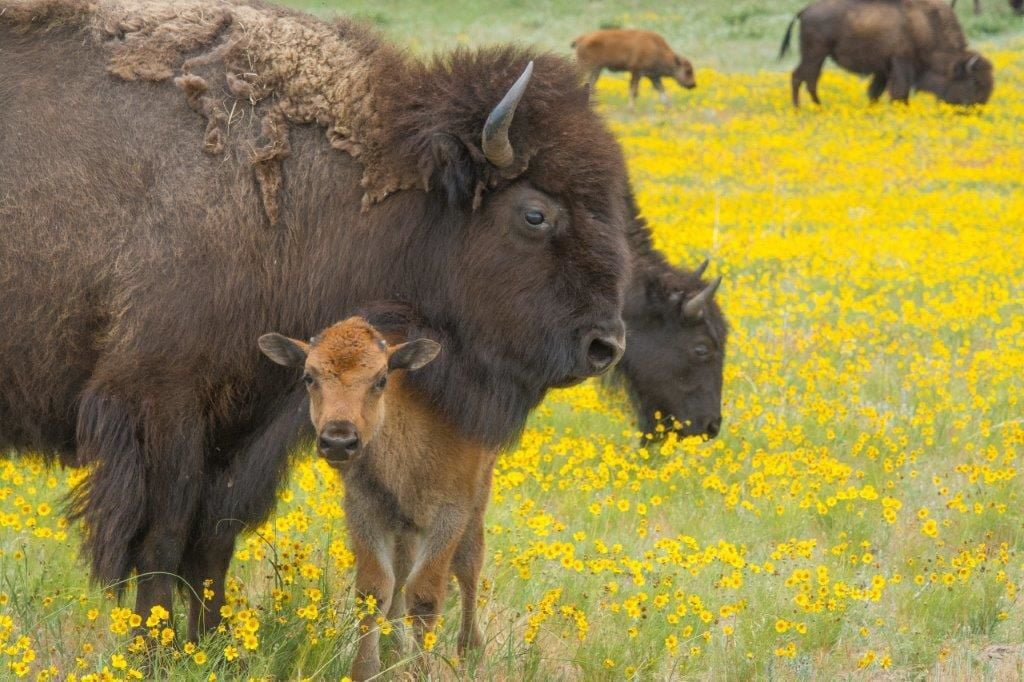 Bison calves are a light brown and stay alongside their mother for nine months. 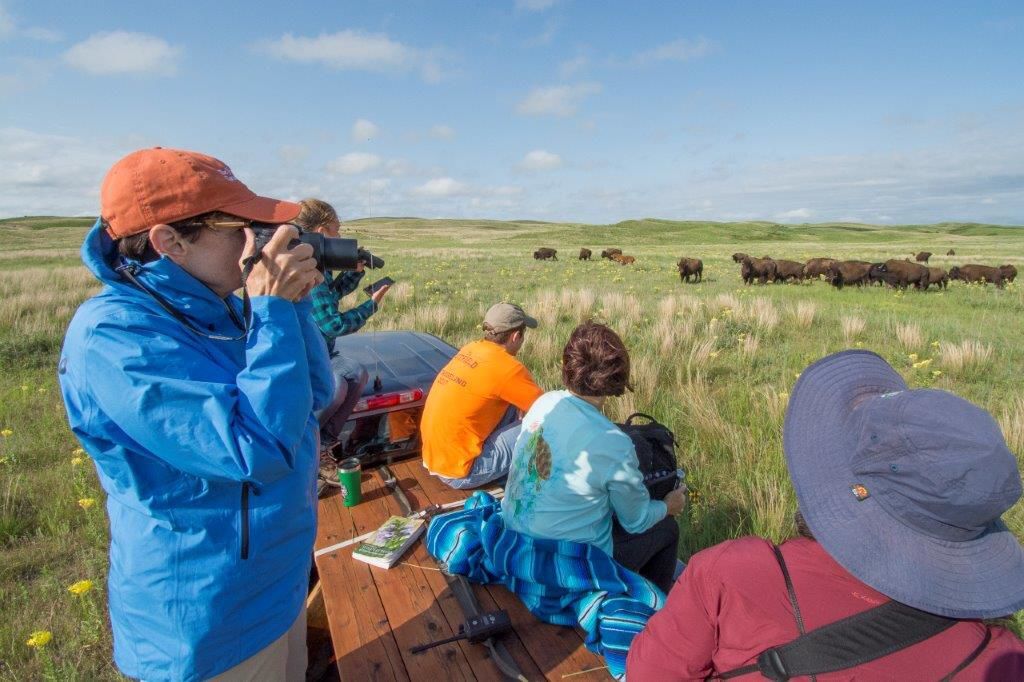 The Nature Conservancy offers tours of the bison herd at the Niobrara Valley Preserve if the tours are prearranged. 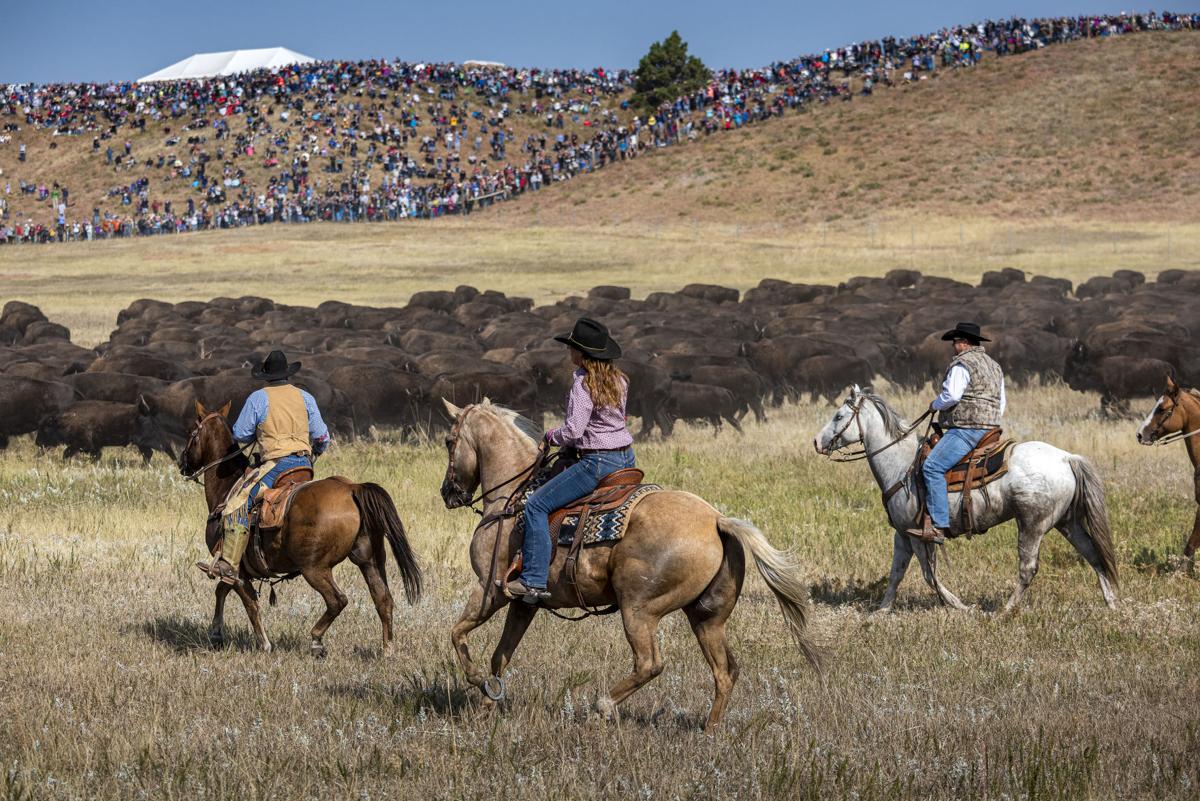 Each year at Custer State Park in South Dakota, more than 20,000 people watch the yearly roundup of bison.

BY JIM WINNERMAN FOR L MAGAZINE

Long before there were Nebraskans, bison had been the dominant species on the prairie for millions of years, according to Chuck Cooper, chief executive officer of The Crane Trust at Wood River, Nebraska.

To help in prairie restoration, bison, also incorrectly known as “buffalo,” were reintroduced on Crane Trust land in Nebraska in 2015, and the 4,500-acre preserve along the central Platte River is one of several places the majestic animal can be seen in the state. The term “buffalo” originated when early settlers thought they looked like the water buffalo and the cape buffalo indigenous to Africa and Asia.

“They are referred to as ‘eco-engineers,’” Cooper says. “They literally change the land for the better and were a missing piece of the complex puzzle that forms a prairie.”

The fact that any bison can be seen in Nebraska is one of the world’s best animal conservation successes. In 1889, just over 300 bison remained throughout North America. Yet early in the 1800s, as many as 50 million roamed the plains.

As Europeans settled the Western frontier, bison were commercially hunted for their hide, for sport, and to clear the land for domestic cattle. Bison were almost extinct before a handful of ranchers and others gathered remnants of the existing herds to save the species.

Today, they can be seen in all 50 states, and it’s estimated that as many as 500,000 bison now graze on public and private lands nationwide.

Now there is National Bison Day, celebrated the first Saturday in November, and in 2016 the bison was officially named “America’s National Mammal.”

Several popular viewing locations, but certainly not all, are previewed below. During the pandemic it is important to check with each location before visiting to learn about current viewing options.

Cooper says there are 147 bison grazing on Crane Trust property.

“There are eight near our Nature and Visitor Center just west of Grand Island,” he reports. “In warm weather, the larger herd can be seen almost daily near a small pond just south of the visitor center on Alda Highway.”

The Crane Trust bison are a genetically pure herd raised on a ranch near Crawford, Nebraska, and represent only 2% of bison in North America without cattle genes.

About 700 head of bison roam two vast open prairies totaling 22,000 acres at this 56,000-acre preserve. In 1985, the Nature Conservancy re-introduced bison to the preserve after an absence of more than 100 years.

The Niobrara Valley herd is one of the largest of several The Nature Conservancy has introduced on Conservancy land nationwide.

According to Amanda Hefner, a conservation assistant at the site, tours are offered if arranged ahead of time, and special bison programs are presented throughout the year.

Native Americans depended upon bison for their winter supply of meat. The animal was also a critical resource for tools made from horns and bones, as well as clothing and shelter made from hides. As such, the animal played an important part in the spiritual and religious life of Native Americans, and bison hunts were sacred events.

To ensure that bison continue to be part of the lives of future generations, the Ponca tribe began reintroducing bison on their Nebraska land in the 1990s.

The tribe also sponsors the Northern Ponca Buffalo/Bison Adoption Program. Donors receive a photo of their adopted bison and an adoption certificate.

OTHER AREAS TO SEE BISON IN THE UNITED STATES

Each September for the past five decades, the 1,400 bison at the 71,000-acre state park are herded five miles into corrals as 20,000 spectators watch just a few hundred feet from the spectacle. Each animal is given a medical check-up, and surplus bison that the preserve grassland cannot sustain are selected to be sold.

Throughout the year, an hour drive along Wildlife Loop Road in the park allows visitors to view the herd from the safety of their cars.

This 59,000-acre refuge is among the oldest wildlife facilities in the United States. The refuge was vital in saving the American bison from extinction in 1907, when six bison bulls and nine cows were imported to the refuge. Today, the herd numbers about 650.

This is the only remaining place in the United States where bison have lived continuously since prehistoric times. According to the National Park Service, Yellowstone is home to the largest bison population in the country grazing on public land, and numbers about 5,000.

The website features several videos of the Yellowstone heard.

Bison never swam 22 miles off the California coast to Santa Catalina Island. Yet since the early 1900s, a herd has indeed been living there.

In 1924, the Western movie “The Vanishing American” was being filmed on Santa Catalina, and one scene required bison. The film production company transported 14 from the Great Plains. Left on their own at the end of the movie, the bison stayed, ate the grass and propagated. But they never made it into the final edit of the film.

Since then, the herd has been kept down to 150 bison, and the shaggy beasts remain a popular tourist attraction.

“Return of the Bison” aired on NETNebraska in 2018. The beautifully photographed, 15-minute mini-movie can be seen at https://www.youtube.com/watch?v=Ww3cMgFr2xQ.

The morel growing season usually runs from mid-April into late May, but foragers this year might see a longer season with timely rains and adequate warmth.

Bison calves are a light brown and stay alongside their mother for nine months.

The Nature Conservancy offers tours of the bison herd at the Niobrara Valley Preserve if the tours are prearranged.

Each year at Custer State Park in South Dakota, more than 20,000 people watch the yearly roundup of bison.