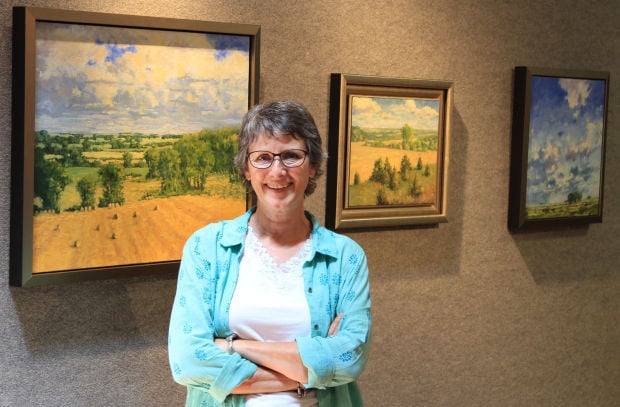 Patricia Scarborough in the gallery. 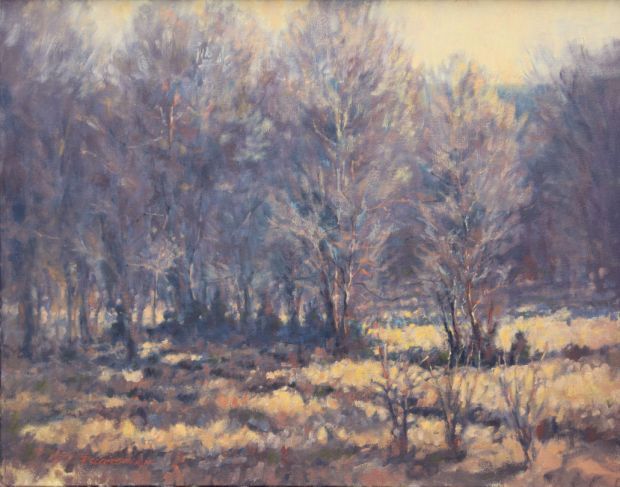 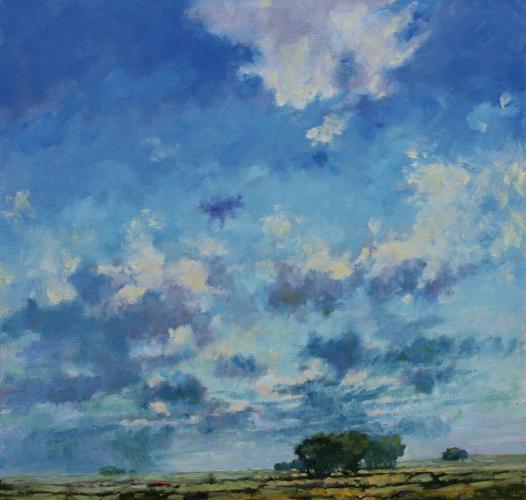 "Floating Above a Sea of Grass" oil painting by Patricia Scarborough. 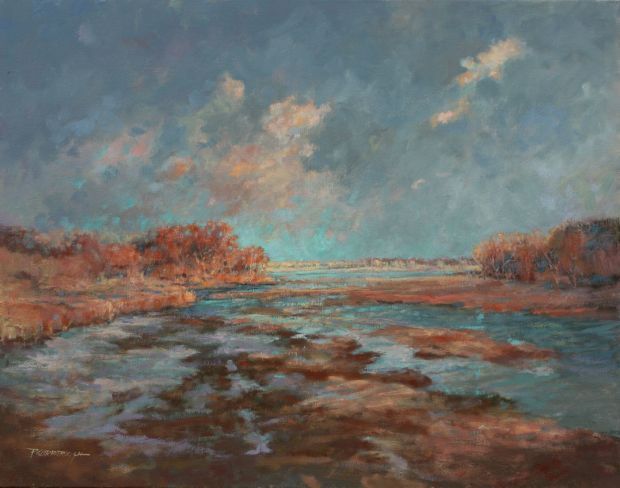 Among Patricia Scarborough's other bright paintings, it is probably easy to overlook. After all, unlike much of her recent exhibition, "Blue River Reclamation" has no flashy blues or saturated greens or popping yellows. It is a subdued landscape dominated by purples and oranges and hints of pink, but it pulls you in, slowly, as the colors appear at first unreal and impressionistic – the color reminding me of Monet's Houses of Parliament series – but then resolve into something both dreamlike and familiar.

Of the painting, Scarborough says, "I wasn’t sure if the trees were reclaiming the river or the river was reclaiming its spot. But I feel there is a change in ownership in that spot.”

Scarborough has long been painting rural landscapes ("It’s something that makes sense to me," she says) and thinks she just might be doing her best work right now. Although I've only recently become familiar with her painting, I'm not disposed to disagree. Besides being simply beautiful, her recent landscapes – on display during July at the Burkholder Project – toe an interesting line between impressionism and realism.

A current resident of Geneva, Scarborough completed formal education in art at what was then Kearney State College, after majoring in "everything but accounting." She kept taking art classes, one each semester, until she realized it was her passion. Never having been interested in painting people or things, Scarborough followed the art school adage of painting what she knew, and developed rural landscapes – and only rural landscapes. There are no seas or mountains in any Scarborough paintings.

“I have pictures of mountains," she says, "but I don’t know them.”

Her current series features the rural landscape in all its forms – on bright, sunny days, on dismal cloudy ones, from warm autumn afternoons to early spring thaws. Every piece is striking, many for their colors, but also because they idle (at least for this viewer) in a sort of limbo between reality and feeling. Besides "Blue River Reclamation," also striking are "Labor and Plenty" and the skyscape "Floating Above a Sea of Grass."

Scarborough counts among her inspirations the Spanish painter Joaquin Serolla, and it's easy to see how some of her work takes and departs from Serolla paintings. An example is Serolla’s "Outskirts of Seville," which seems to use the same color palette as Scarborough’s "Labor and Plenty." While her work appears to be tighter than the Serolla landscapes, it still most reminds me of other impressionist styles, too. (Scarborough says she wouldn't use the term "impressionist" to describe her work. Perhaps I am wont to see impressionism in her work, though, having recently seen a lovely Degas special exhibition at the National Gallery in Washington.)

Scarborough instead describes her work with a certain "freeness to the brush that is intuitive rather than real." She adds: "Truly, you know, it’s like riding down a hill on a bicycle with no brakes. Sometimes it’s awesome and sometimes it hurts so bad.”

Although Scarborough was mostly using the bicycle analogy to refer to the vagaries of the creative process, seeing these landscapes, strangely, is much like you would see them while you were riding a bike downhill: everything appears slightly blurry, hyper real, saturated, as if everything is coming too fast.

Scarborough is unassuming and unpretentious in person. She says she has grown to be more driven now by the act of painting itself, the beautiful brush stroke out of nowhere, the process of discovering an image from some unknown corner of the mind. Perhaps it is from this focus on pure method – one good brush stroke after another – that her best work flows. It's like Hemingway's method for a good story: "Write one true sentence, and then go on from there."

"I have just deepened my interest in the actual aspect of painting," Scarborough says, responding to my request to sum up how her work has changed. "I just wanted to understand better what I’m doing and why I’m doing it … I hope I’ve just gotten better at communicating those ethereal ideas of what makes up the world that we see. Because sometimes it’s sort of mysterious – you think you’re looking at something and it’s not. That’s what I’m looking at: what language to use in paint to translate that.”

Whatever the language – the idiom, the words, the syntax – it's working.

“There is that quiet space where something lovely is happening," she says. "I guess I’m trying to figure out, ‘Why there?’”

Over her 33 years as executive director, Metzger has met with thousands of women at hospitals and Voices of Hope, which provides confidential crisis intervention services.

CEO for the Nebraska Department of Health and Human Services

Patricia Scarborough in the gallery.

"Floating Above a Sea of Grass" oil painting by Patricia Scarborough.