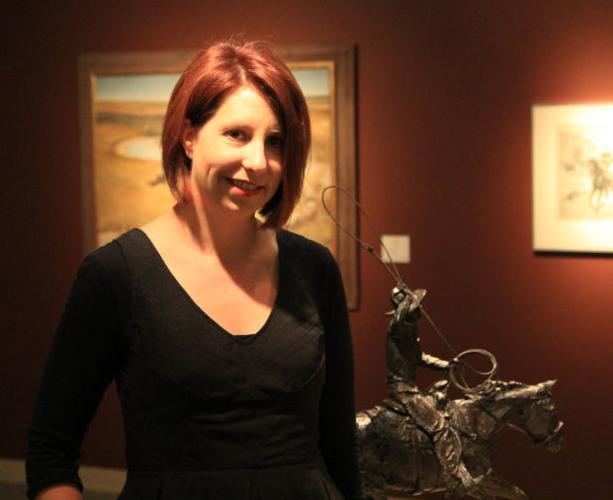 Standing in the basement gallery, Melynda Seaton has recently been hired as the new curator for the Great Plains Art Museum. 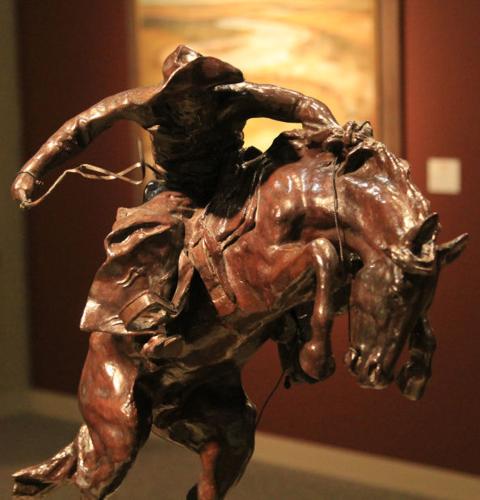 Perhaps the most iconic piece of art at the Great Plains Art Museum is Frederic Remington's “Bronco Buster” (1895), a bronze sculpture. 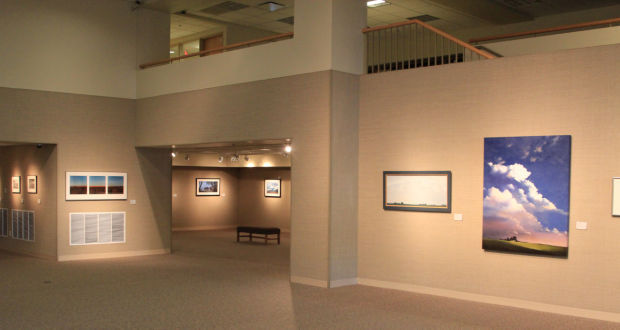 The first floor of the Great Plains Art Museum. Additional gallery space can be found in the basement.

At the corner of 12th and Q streets, it may be easy to miss. It's not far from the Sheldon Museum of Art, probably the most recognizable museum in town – along with Morrill Hall. But inside the Great Plains Art Museum, according to new curator Melynda Seaton, if you stop and check out the two floors of sculptures, photographs and paintings, you might find some reflection of life in Nebraska – even some reflection of you.

It may be in a landscape by Keith Jacobshagen – of large Midwestern skies that make you "feel at once infinitesimal and at the center of everything," as Ladette Randolph once wrote. Or in the famous "Bronco Buster" bronze by Frederic Remington, or maybe in some more political contemporary work from a Native American artist, such as Laurie Houseman-Whitehawk.

For a museum that specializes in art of a particular region, in fact, "there is a lot of variety," Seaton said.

Seaton is the brand-new curator of the Great Plains Art Museum, which is part of the Center for Great Plains Studies at the University of Nebraska-Lincoln. Having nearly completed her PhD, which focuses on the art of the American West, Seaton said the job of curator – who oversees the art collection and manages the gallery – is a great fit.

“This was a perfect opportunity," she said, "because the museum has art that is relative to my focus of study, but also part of the university system, so there are opportunities to be part of the teaching environment.”

Seaton worked in a number of galleries, including the Gerald Peters Gallery's Dallas office. She has practical experience in nearly all facets of museum work, including areas the public doesn't often think about: the logistics of exhibitions and programming, and preserving and storing artworks.

As curator at the Great Plains Art Museum, Seaton plans to emphasize programming – catching individuals who might just pass by 12th and Q. She said her goal is to have “more than the stuffy art museum where you just come and look at the art – very formal – to where there is more dialogue and interaction between the public and the art.”

While walking through the museum, the bronze "Bronco Buster" statue by Remington is instantly recognizable – it's an indelible image you have probably seen recreated, or at least modeled, many times in cowboy country. The museum also has quite a collection of photography, as well, including (currently) some stirring sky shots by Jan Christensen. The downstairs gallery, Seaton said, will soon be modernized in presentation. Also coming soon is an exhibition of photographs by Fred E. Miller, who documented how the Crow lived in the early 20th century.

No matter what type of work it is, however, Seaton emphasized that the depictions show interesting interpretations of our world to those of us who grew up in Lincoln or on the Great Plains.

"Since there is a focus on the Great Plains," she said, "we can see there are a lot of ways in which different artists interpret their experience with the Great Plains." Seaton highlighted the drastically different interpretations and reworkings of cowboys (the topic of her dissertation), and other recurrent images or figures, like the buffalo.

Professor Richard Edwards, director of the Center for Great Plains Studies, expressed confidence in the new curator, and said the museum had its own niche and role to play.

"We are a small, important player on the Lincoln regional arts scene," he said. "We are not nearly as big as the Sheldon or the Joslyn. We’re a small operation compared to those. But we think we can have high impact if we focus our efforts and make sure we understand what it is that we can do that adds value to the arts scene … and I think that’s what Melynda is going to be working on.”

From hearing her talk about art, whether it's the subject of her thesis or the works in the museum's collection, Seaton has a strong grasp of the important role of the museum in Lincoln's culture.

“Art is a really important tool that we can use to learn about culture and understand people’s feelings," she said, adding: "If you think about all of the really important cultures, like the Greeks, what we remember about them the most is the art that was left behind."

Director of Marketing at Hausmann Construction

Standing in the basement gallery, Melynda Seaton has recently been hired as the new curator for the Great Plains Art Museum.

Perhaps the most iconic piece of art at the Great Plains Art Museum is Frederic Remington's “Bronco Buster” (1895), a bronze sculpture.

The first floor of the Great Plains Art Museum. Additional gallery space can be found in the basement.