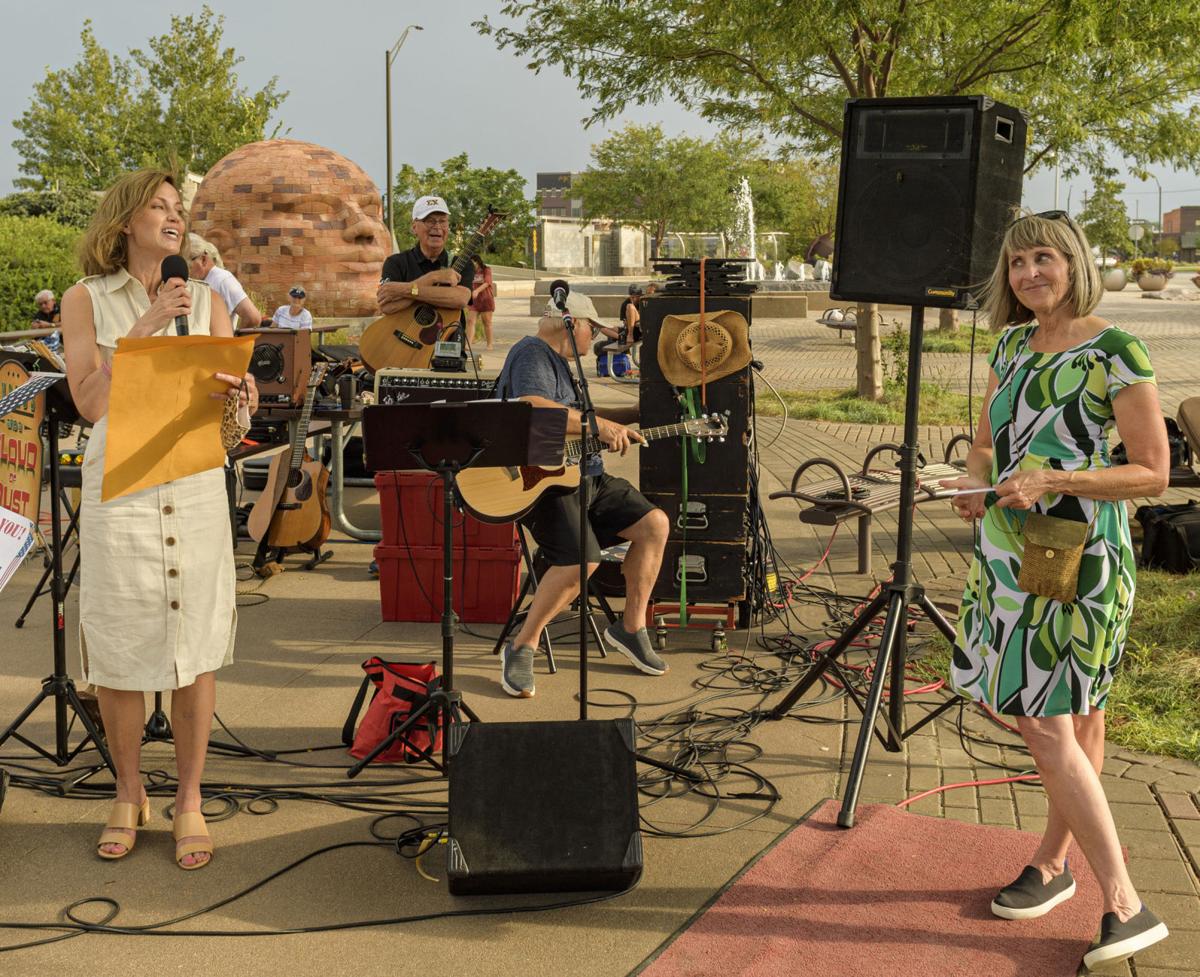 Lincoln Mayor Leirion Gaylor Baird reads a proclamation making Aug. 27, 2021 Cindy Lange-Kubick Day. Members of the band 3 Chords and a Cloud of Dust, which performed at the retirement party, are behind them. 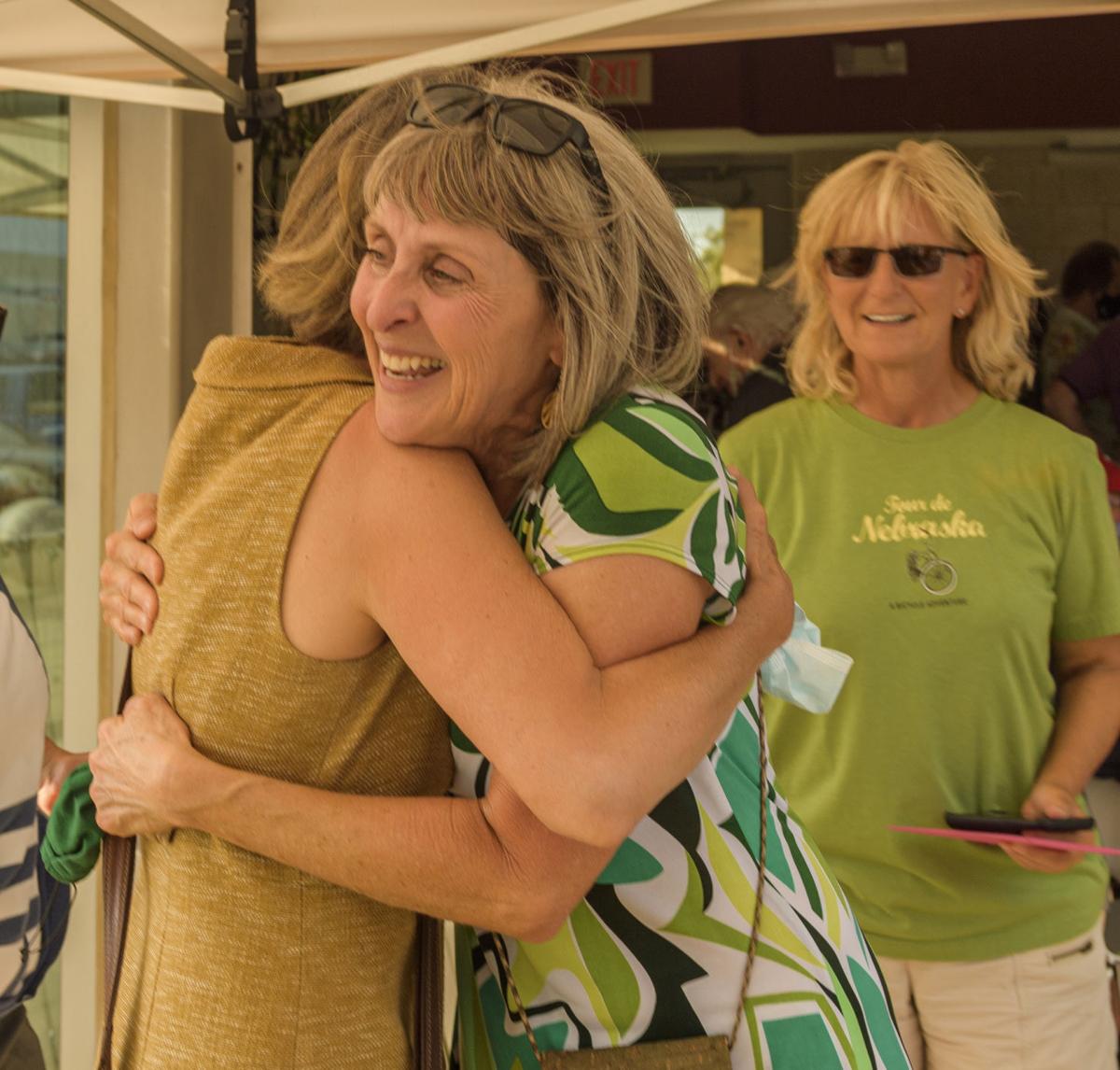 Cindy Lange-Kubick gets a hug from Stephanie Stacy as Rhonda Revelle, Husker softball coach, looks on. 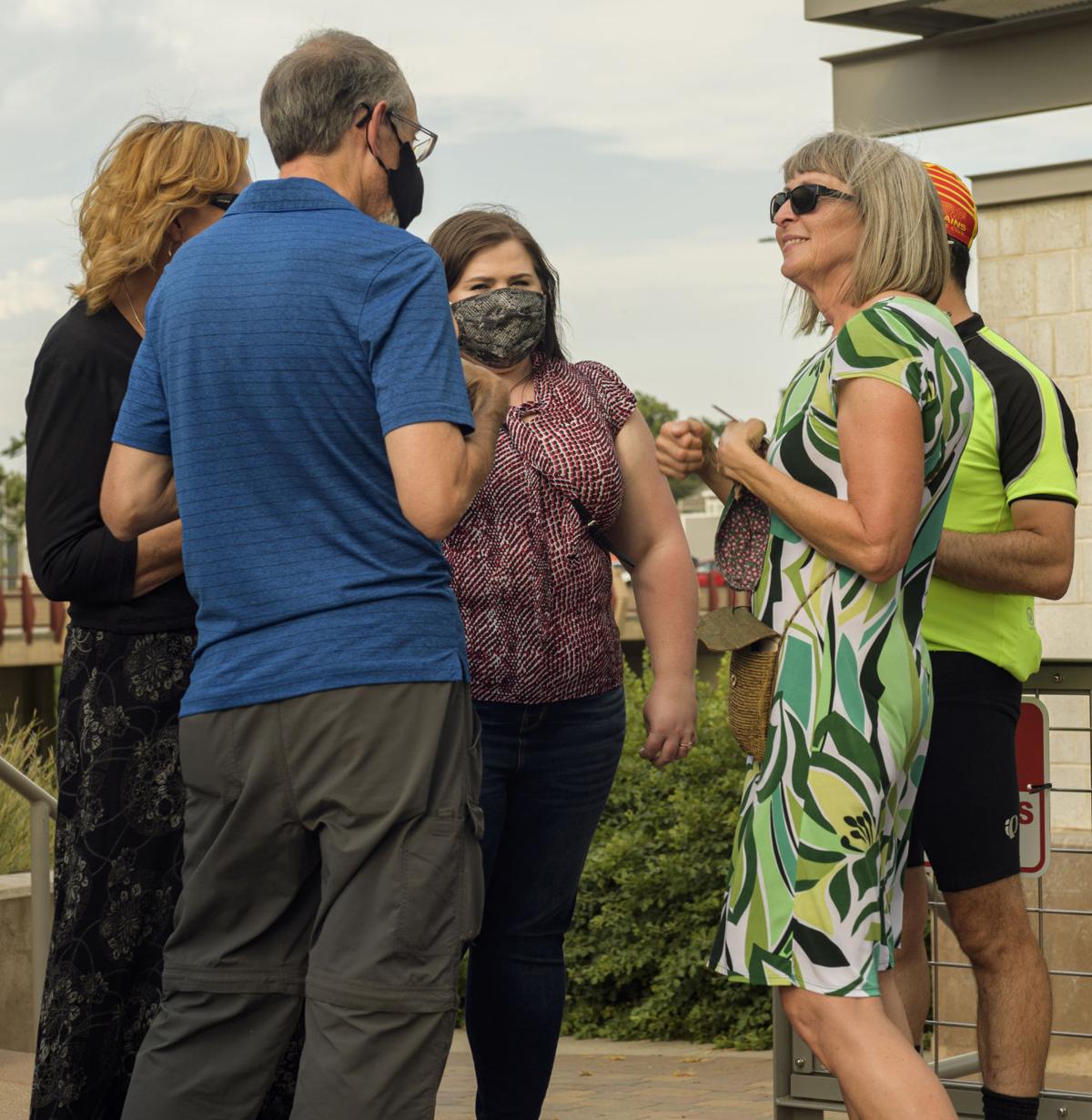 When you think about it, there are many ways to describe a city. It can be convenient, beautiful, bustling, touristy, picturesque. Likewise, there are multiple ways to describe the people in a city including elected officials, business leaders, movers and shakers, as well as the rich and famous.

When you put the people and the city together, descriptions might include “hopeful,” as Dorothy Parker describes New York, or a “jewel of jewels,” as Virginia Woolf describes London. Now, if I were to ask Cindy Lange-Kubick to describe Lincoln and its people, I rather imagine she’d conjure up the term “stew.”

Just imagine her standing at the stove, sticking her spoon into the stew and touching it to her lips … and you get a story about Millie Kreuzberg, a column that Cindy wrote back in 2007 telling the story of Millie, who was 80 at the time, taking second place in an adult spelling bee.

A little later, Cindy stirs the stew as it cooks on the stove, takes another taste, and out comes a story about Chuck E. Cheese and how she’ll miss the gaudy entertainment, and hoping that jumping for joy in a germ-infested arcade parlor would result in memories of visits with grandma.

Once again, dipping her finger into the stew of Lincoln, she touches on the death of Robyn Wilbur, the mother of a fellow reporter at the Journal Star.

The evening of Aug. 27, the seasoning and spice of Lincoln gathered at the Jayne Snyder Trails Center to wish Cindy farewell. There was Scott Young, retired executive director of Lincoln’s Food Bank. He definitely seasoned Lincoln and did it well. And Susan Larson Rodenburg, an advocate for Lincoln’s parks and so much more. Alice Dittman, retired grand lady of Cornhusker Bank, definitely added a savory spice. Ron Hull, himself a stew maker on the grand scheme of public broadcasting, was there as well.

Oh, and Mayor Leirion Gaylor Baird, a major ingredient in our stew we call Lincoln, issued an official proclamation celebrating Cindy’s unabashedly picky eating, noting that during darker times Cindy’s columns helped promote healing through her thoughtful reflections, and that the editors of the Lincoln Journal Star might buy her a box of commas to help pull together some of Cindy’s dangling phrases and short sentences.

Over the years, we found Cindy touching the spoon to her lips, and she declared Deb’s Produce under a tent at 48th and Highway 2 a great place to grab some corn, a melon and some tomatoes. There’s the spice you can detect in our stew when you read about Corinne Weber and her story of fighting cancer, and the legacy she left through her children and husband.

And, yes, if you’ve been around Lincoln for any length of time, you can definitely detect the spicy flavor of Cindy herself, and how nervous she was addressing the Downtown Rotary Club back in 1998.

Our stew is far from done, and as it simmers on the stove, it just keeps expanding. At least that’s what the latest census tells us. The big question on my mind right now, though, is who will be the person who touches the spoon to her lips and shares a story about this spice or that dab of seasoning? Or, when we’re all worked up about our pothole-filled streets or cracked sidewalks, who will remind us of the savory character who lives just down that street?

And, who … pray tell … will be the person to tell us of the fascinating character who makes our community just a tad more wonderful when the end of the world seems imminent as the Huskers lose a game?

Cindy, oh Cindy. Cindy don’t let me down. Write me a column soon, and I’ll be homeward bound. While we’ll miss your dabbling in our stew to tell us what’s in it, we’re certain that it’ll have a distinct flavor of Cindy Lange-Kubick for years to come.

Lincoln Mayor Leirion Gaylor Baird reads a proclamation making Aug. 27, 2021 Cindy Lange-Kubick Day. Members of the band 3 Chords and a Cloud of Dust, which performed at the retirement party, are behind them.

Cindy Lange-Kubick gets a hug from Stephanie Stacy as Rhonda Revelle, Husker softball coach, looks on.