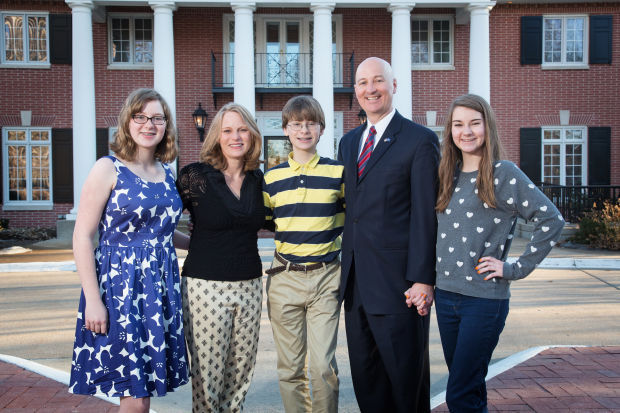 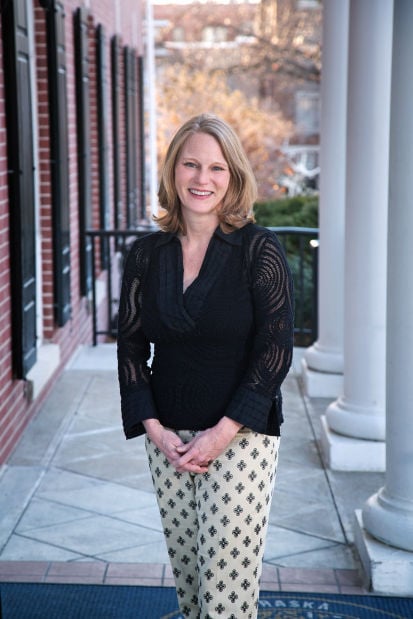 Throughout her life, Susanne Shore has held many titles. Daughter. Sister. English major. MBA. Nurse. Volunteer. Her role as wife of Pete Ricketts recently led to the newest title, first lady of Nebraska.

Yet with Pete, she started another role that she cherishes even more – mom. With Roscoe and Margo just turning 16 and Eleanor following closely behind at 14, the Ricketts kids are in the midst of their teenage years. Not wanting the kids to have to switch schools mid-year, Shore continues living with them in Omaha, while the governor spends most of his nights in Lincoln at the Governor's Residence.

Learning to live apart some of the time has been a challenge for all of them. For one thing, Shore simply enjoys being around her husband. Not having him around to help out with certain parts of parenting can also be difficult. She readily admits that “The hardest transition for me has been when Pete is around, and he can't just jump in the car to go get somebody or go take them somewhere because he has to be driven by a trooper. But that's the position we have chosen, and that is okay.”

Shore does feel like the teens are at the perfect age for all of this transition. “This is a good time. The kids are very independent.”

When Ricketts first campaigned for a government position in 2006, their situation was vastly different. With the kids being so young, Shore recalls that era as a bit “like herding cats sometimes.” After Ricketts was not elected, her disappointment was tinged with relief as she thought that was the end of their public service path.

“We've worked to make the world a better place. Let's see what we can do from here now,” she had thought at the time. Despite the fact that various government positions opened up, Shore never even considered that her husband would want to campaign for any of them. But that changed when Governor Heineman was about to be term limited.

Shore remembers that “When the governor position opened up, the path kind of laid itself out. I personally wanted a governor that I felt was capable and one that I trusted, and I just felt like Pete was that guy. I think his skill set is so much better suited to being a governor. Having run a company, he has seen how an organization can be put together. It was a no-brainer for me to say to Pete, 'Maybe this is what you're supposed to be doing.' In the Senate, you are one of 100, all equal and all trying to move a huge boat in one direction. As governor, you can take some of those skills and run an organization. It is more like being a CEO. He knows how to do that – to get the right people in, to set benchmarks and expectations, then let good people do good works and hold them accountable.”

While Ricketts' responsibilities as the top Nebraska public leader are set, his wife's role is not. Becoming Nebraska's first Lady did not involve any clear-cut parameters. Already Shore has taken three of the previous first ladies out to lunch to provide input into her role. She notes that “nobody hands you a job description or a manual. To have them be willing to give me some thoughts and advice meant so much. They shared little bits of truth and insight to help me do some determining before such things were defined for me.”

Currently, Shore commutes to Lincoln just twice a week and keeps her first lady office hours at the governor’s residence from 10 a.m. to 2 p.m. She is fully aware that the teens need to come first, because her time with them at home still is short. Although she can easily make other arrangements, she still prefers to pick up each of her children from school.

“I try to make it a priority, because I have got to tell you, the time in the car with each kid is important. Ten minutes of quiet time. You can actually gently ask them ‘How was your day?’”

Becoming first lady has caused Shore to be more purposeful with her time with the kids. As far as her aspirations for her time as Nebraska's first lady, Shore feels like that is still in process.

“I am a very ‘go with the flow’ kind of gal,” she says. “I'm just sort of gradually walking down the road and seeing which paths are there and which ones I want to take. Everything I am looking at, I am also gauging, 'How appropriate is it? Can I do that?' I don't know what my role is going to be, although I do see some possibilities slowly coming around. There are already a lot of people trying to make positive differences in our state. I don't want to reinvent the wheel. If I can help other people to be successful, then that may end up being my best path.“

This model of being supportive is one that she has seen in her own extended family. Shore is thankful for all of the extra time those family members have spent together lately.

“This year has been extraordinary, because we have gotten to see a lot of both his family and my family,” she says. “They came in for the election and the inauguration. I do have the sweetest mother in the world. She is just this kind, loving woman. What I have learned from her is patience and perspective as a mother – her loving compassion in accepting you where you are. I also have the best mother-in-law in the world who is also such a loving woman. I really lucked out. Forget just getting to marry a great guy – I got a great family in addition.”

Carving out time for her own immediate family is also a necessity for Shore. On Sundays, when her husband is back in Omaha, they have a family day and try to keep the interruptions to a minimum. On Wednesday nights, whenever possible, Shore and the kids make the trek to the Governor's Residence to enjoy dinner with Dad. Getting to enjoy the delicious efforts of the resident chef is a definite perk for Shore. At their Omaha home, Shore is still the one running the household.

“I am the cook, the chef, the laundress. I'm everything at that house. Nothing has changed there,” she says. Although she does have some occasional housecleaning help, for the most part Shore relies on the teens to contribute their part.

As a mom, Shore feels that raising the kids to not feel entitled is a critical lesson.

“Part of it for me growing up with Depression-era parents is that you know that things can change at any time,” she says. “Yeah, you might have some dollars now, but you never know what is going to happen in a couple of years. You need to be an independent, strong person who has good skills. I do not ever want them to define themselves as being “Pete's kids” or as having a certain amount of money. I want them to define themselves as being smart, nice people who are trying to make a difference in the world. Having expectations of them makes them be better people.”

Those “making a positive impact” goals are ones that Shore intends to live out in her roles as first lady and as first mom.

Arbor Day Foundation CEO will step down in January

Getting all of us in Lincoln to recycle nearly 20,000 tons of cardboard each year means that the very expensive process of establishing a new landfill will be delayed for several years, and all of that cardboard has been recycled.

Perseverance enabled Joy Citta to become a Lincoln Police sergeant, lieutenant and captain. Retired from Lincoln Police, she is now an adjunct professor in the Criminal Justice Department at the University of Nebraska-Lincoln.