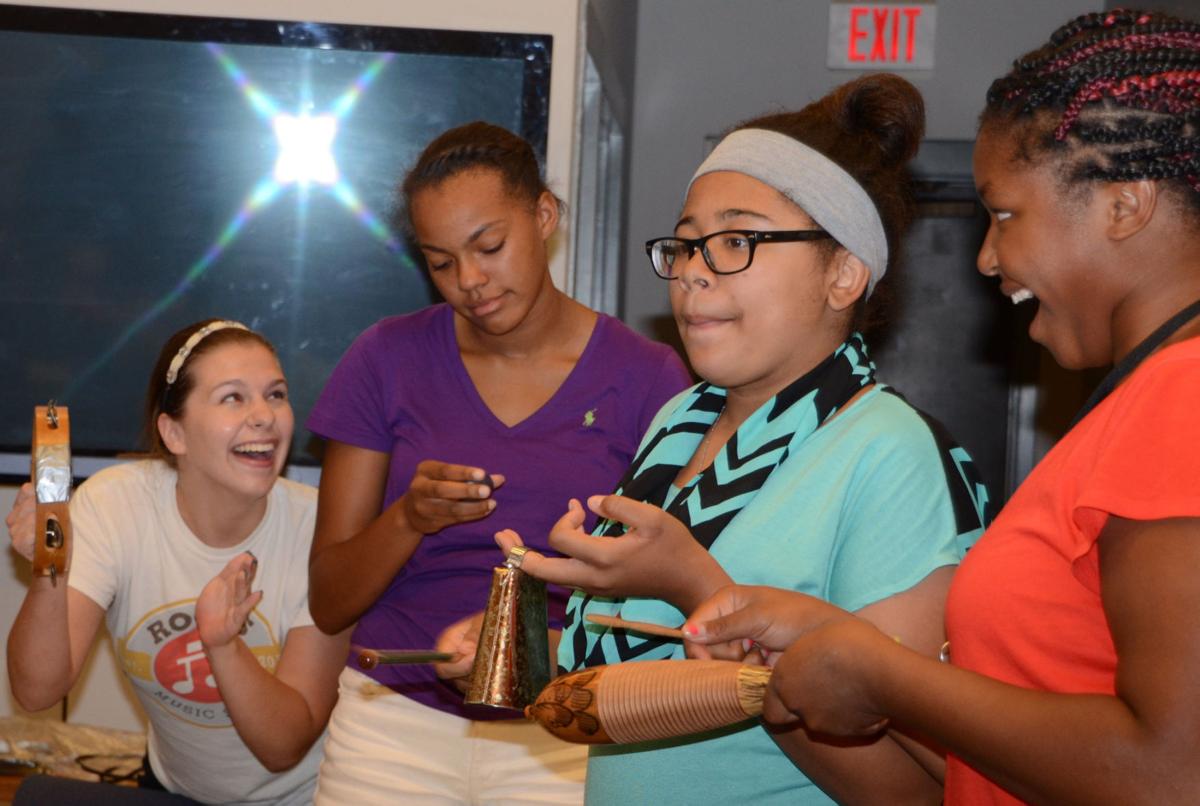 Emily Schlitz (vocals and percussion) plays along during the girls’ session of Roots Music Education at the Malone Center. 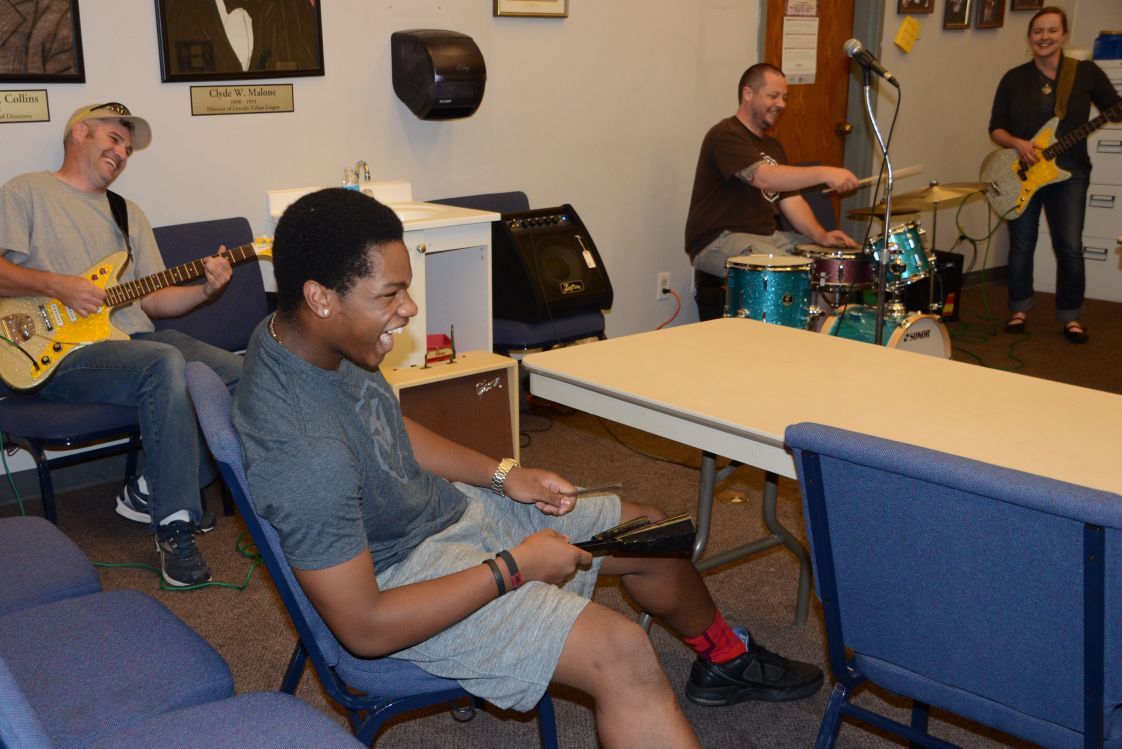 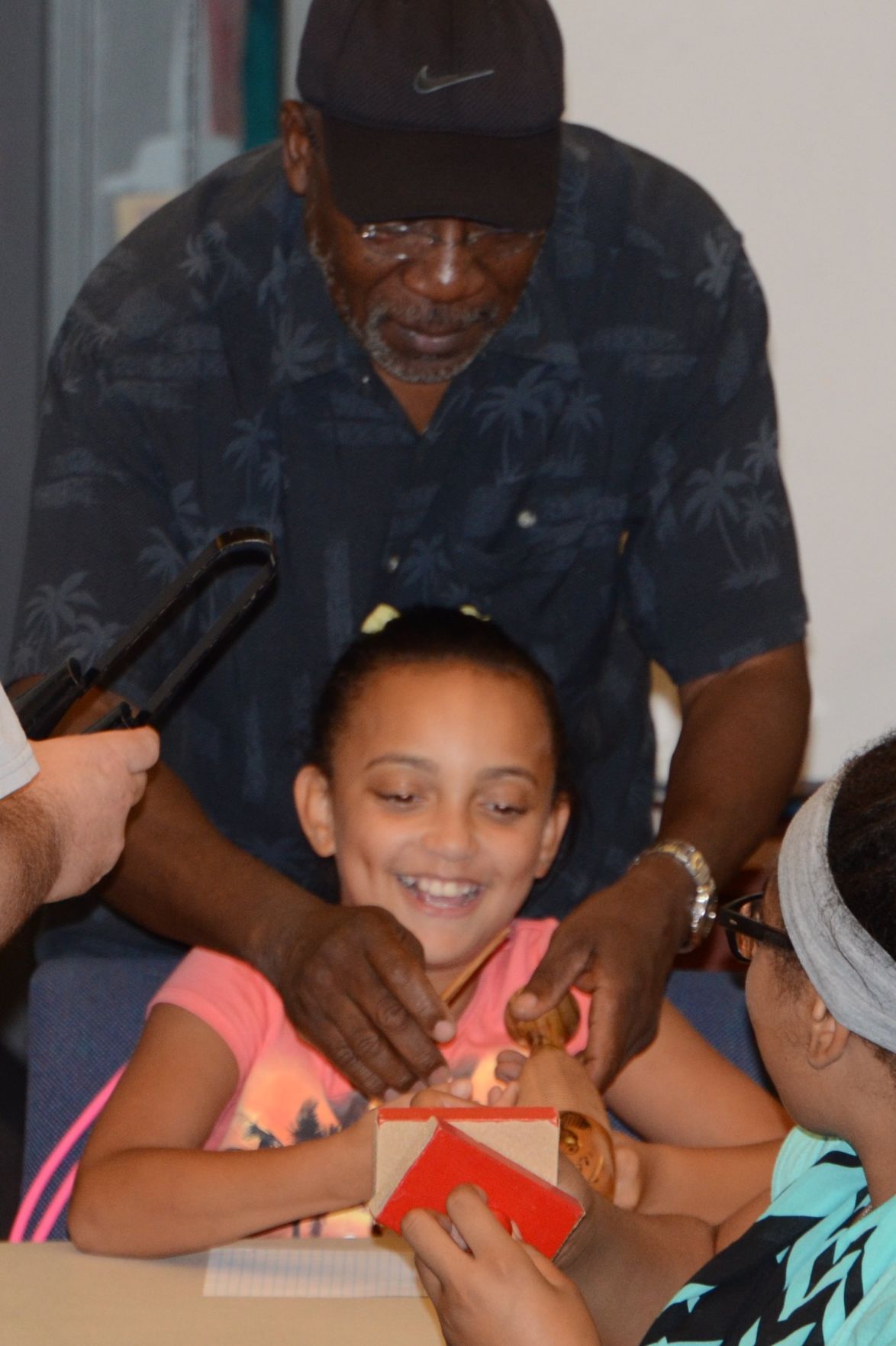 Sax and flute player Dell Smith demonstrates a rhythm instrument during the girls’ session of Roots Music Education at the Malone Center.

What do you do when music has changed your life?

You follow where it leads. You look for ways to offer this transformative power to others.

So it is with Ryan Larsen, drummer and band leader for the Blues Messengers and owner of Roots Music Shop at 19th and Q streets. For a number of years, Larsen and his bandmates have helped young people develop musically and gain performance sensibility through what could be described as a “band apprenticeship.” In 2015, Larsen took the next step by partnering with the Lincoln Arts Council and Malone Community Center to offer Roots Music Education as a summer program for about 25 middle and high school students.

Larsen defines “roots music” as that which expresses the human condition; homegrown, often identifiably regional and universally relatable. As a young person adrift, he found his identity, community and mentorship among local players. He found the stories in the songs very powerful and developed a tremendous respect for those who weathered hard times with dignity.

To ground the students in the history of roots music, Larsen utilized segments of a PBS American Roots Music documentary as a springboard for discussion. Following the pioneers in a variety of musical movements brought the students to modern music. Participants were each asked to bring in their favorite song and apply their knowledge to identify musical influences and talk about the appeal of the music, instrumentation and/or lyrics. Students were encouraged to journal in response to questions like: What is one of the most difficult aspects of being a young person in today’s society? How do artists/musicians express themselves? How do artists/musicians expressing themselves change culture?

The opportunity to meet and play with seasoned professionals was a high point of the series. Each week, a different musician would spend a few minutes telling students about their journey in music, information about the instrument(s) they play and demonstrate playing. The sessions were very interactive with students trying their hand at a variety of string, brass, percussion instruments and vocal styles.

Larsen describes it this way: “Everyone was engaged, and it felt like friendly competition to see who could play a particular percussion part correctly. Playing with a live band was far more effective than working with recorded music. Students could experience the give-and-take collaboration among the musicians; learning when to be supportive and when it’s an individual’s time to shine.”

Roots Music Shop is located near the Malone Center, and Larsen offered rehearsal space or just a safe place to hang out. He encouraged students to talk with him if they needed an instrument or had an instrument in need of repair. Teaching and enabling young people who wish to pursue music or vocal instruction is part of Larsen’s business plan. Consequently, one of the young girls from the program is now taking private music lessons.

Thanks to support from the Pearle Francis Finigan Foundation, the Lincoln Arts Council, Roots Music Shop and the Malone Center, Larsen will be bringing Roots Music Education to the Malone Center students again in 2016. These experiences and relationships that extend well beyond the classroom deliver profound and life-changing experiences for all involved. Making music together makes a difference.

For more information about “Art Makes Me SmART” programming from the Lincoln Arts Council, contact Lori McAlister at 402-434-2787 or lori@artscene.org.

Meagan Liesveld: Answering the call to leadership in Lincoln

Meagan Liesveld has coached her daughter’s volleyball team, sits on the Lincoln Community Learning Centers Board, serves on a number of other committees and is a new member of Rotary 14.

The building that now serves as the Deer Springs Winery tasting room is actually the refurbished and enlarged family home that was built on the land after it was homesteaded.

Emily Schlitz (vocals and percussion) plays along during the girls’ session of Roots Music Education at the Malone Center.

Sax and flute player Dell Smith demonstrates a rhythm instrument during the girls’ session of Roots Music Education at the Malone Center.