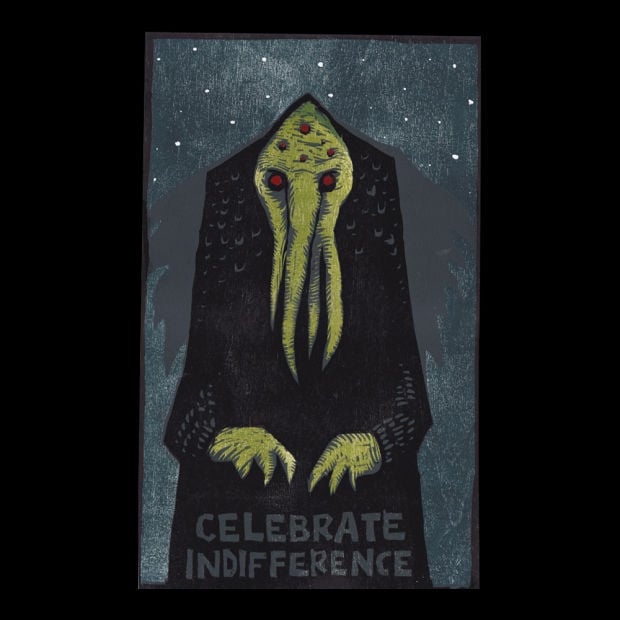 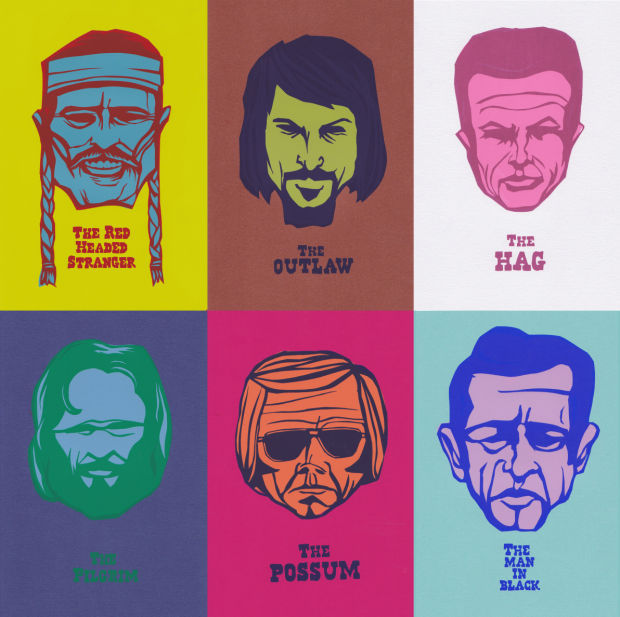 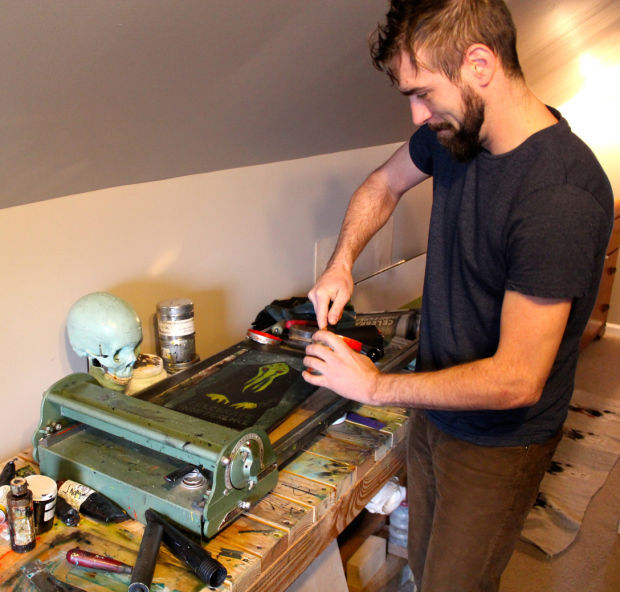 Joshua Norton primarily works in woodcuts. The image is sketched and then carved into a wood block, which is used, layer-by-layer and color-by-color, to make a print.

With fierce red eyes, Cthulhu stares back at me. His lime-green face – complete with tentacles – is menacing. His body is black and scaly, and he has rudimentary wings. He's scary.

But thankfully the Cthulhu I'm looking at is merely a print, the woodcut creation of artist Joshua Norton, and not H.P. Lovecraft's famous hibernating monster, who first appeared in a 1928 short story and who has now had something of a rebirth in Internet culture. Norton will be showing off his work (including woodcuts, like Cthulhu) at the Tugboat Gallery, 116 N. 14th St, in January. With his sharp lines and flat colors, his work recalls comic books, album covers, graphic design, bits of Warhol and pop art, and even – with woodcuts such as "Green Wave," which depicts a green moon in a swirling sky – Van Gogh, at least if "Starry Night" had been a still in a graphic novel.

Cthulhu is just one of many monsters that Norton finds fascinating: his work features squids, bloody-jawed wolves, the Yeti and vampires, among others – among his self-described "silly obsessions." His most popular has been a series of depictions of the mythical Sasquatch (a.k.a. Bigfoot), including a woodcut of the shadowy man-beast poised before the state of Minnesota outline.

Norton is, in fact, from the “land of 10,000 lakes,” but his formative art years were in Lincoln, where he obtained a Master of Fine Arts degree from the University of Nebraska, studying with noted printmaker and woodcut expert Karen Kunc. During his time on campus, Norton spent many hours, he said, in Morrill Hall, where – thanks to his grad student credentials – he was able to see the museum's backroom inventory of mastodon skulls.

"I loved Morrill Hall and going in to Morrill Hall, and using that as a launching pad for some of my iconography," Norton said.

From Morrill Hall grew "Insolvent," a red-orange woodcut that seems, strangely, alive; and "The Memory of Bones," perhaps Norton's most striking work (and my personal favorite), a linoleum print of a mastodon skull with a psychedelic rainbow of – what I guess to be – time pouring outward between its tusks.

Norton primarily works in woodcuts. It's a painstaking process: the image is sketched and then carved into a block of wood, which is used, layer-by-layer and color-by-color, to make a print. Many of Norton's woodcuts require many different colors, and therefore many different layers, often 20 or more.

"Printmaking is all about layering," Norton said. "I'm never quite sure about the final product until the last layer is done." He also has to cross his fingers: "You also have to have faith in the process to know this will work out in a beneficial way," he added.

What also drew me to Norton's work was his use of color. It's often flat, bright and saturated, and as it dominates much of his images, it would be hard to underestimate how important the right color seems to his prints and woodcuts. (Or for any work of art, perhaps: "Color," Monet once said, "is my day-long obsession, joy and torment.")

In the "age of appropriation," as the current artistic zeitgeist has sometimes been termed (and as Norton calls it himself), where ideas and images and motifs are remixed and repurposed at will, Norton's work stands out as finding an original path through familiar territory. While he works with wonted icons and characters – the B-Movie monsters, or his "Outlaw Country" series of portraits of old-time country singers, like Kris Kristofferson or Johnny Cash – he develops all his artwork from original drawings.

"I try to reach outside of that and bring something a little bit more unrecognizable to it," he said. They look at once completely familiar and completely fresh.

Of his other works, I found particularly striking a woodcut portrait of the deceased writer Christopher Hitchens. Though the portrait was completed before Hitchens was diagnosed with cancer, it's eerie and sepulchral, and conveys the gravity the writer – often aphoristic and humorous – carried with him. (How funny and witty we often remember Hitchens being, but how often we forget what serious stuff he was talking about.) By the same token, Norton's screen print of Julia Child captures her playful, unpatronizing smile. You can almost hear her distinctive, charming voice.

Years ago, Norton started making posters for bands – which he still does – but it has rapidly spread from there. It will be exciting to see what comes next.

If you see it, you remember it.

The guy has made Lincoln his home three times, and finally, the third time was a charm. He’s settled in.

Joshua Norton primarily works in woodcuts. The image is sketched and then carved into a wood block, which is used, layer-by-layer and color-by-color, to make a print.