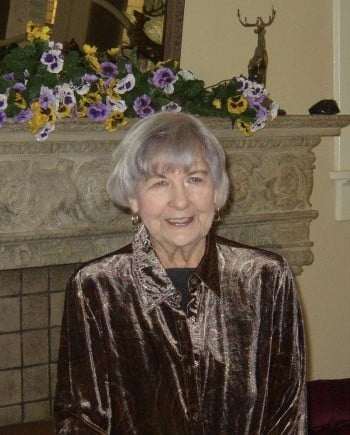 Barbara Fox in 2009 by the fireplace at the Antlers Center. COURTESY PHOTO 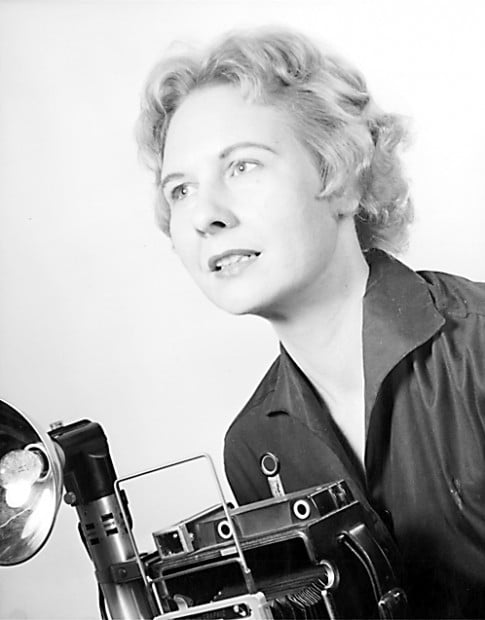 A young Barbara Fox as a photojournalist with her speed graphic camera. COURTESY PHOTO 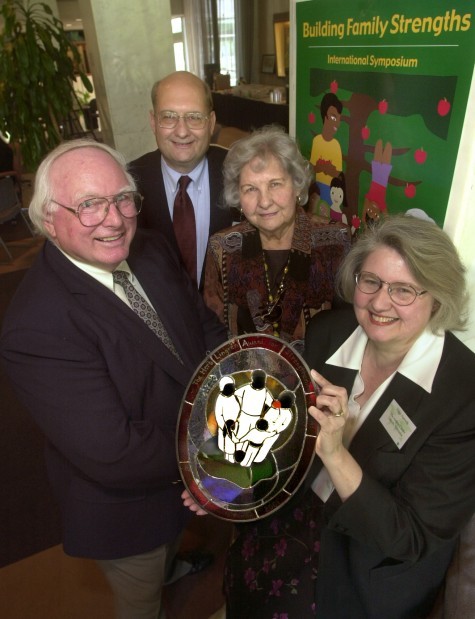 Winners of the Herb Lingren Strengthening Families Lincoln Award in 2001 – In front are Ron and Paige Namuth, with Kevin and Barbara Fox at center. BY ROBERT BECKER/Lincoln Journal Star

Barbara Fox is best known as the founder of Houses of Hope alcohol and drug rehab centers. But her influence goes far beyond that.

She helped start numerous self-help groups, which served as models for groups all over the country and even into Canada. Fox, who passed away in 2009, also ran behind-the-scenes campaigns for causes she was passionate about, like outlawing corporal punishment in schools and even eliminating MSG from food.

Also, Barbara and Ralph worked as photojournalists, often covering disturbing events. When Charles Starkweather and Caril Ann Fugate were arrested for murders in the Lincoln area, Ralph and Barbara shot photos of the crime scenes and even Caril Ann's bed in the house where she lived in extreme poverty. Barbara felt that these crimes could have been prevented if the young people had been given help and support for their problems.

"Journalists are usually detached," Namuth said. "They want to get the story and get out. My parents did that for many years, until all of a sudden I think the story just got them."

The Foxes started Houses of Hope, residential treatment centers for homeless alcoholic men, in 1962. Shortly after that, Barbara saw the need for women's treatment, so she helped found St. Monica's Home.

Barbara took the initiative to reach out to people who needed help, Namuth said. Once she read a newspaper account about a Lincoln woman who accidentally crashed her car into a building. She bought a book on recovery after car accidents, contacted the woman, and helped her start a support group. She also helped start groups for gamblers, overeaters, narcotics addicts, sex addicts, partners of sex addicts, families of suicide victims and many others.

"People loved her," Namuth said. "She would say, ‘I have some materials for you. I'll put them in the e-mail. You're not the only person this has happened to. You can call me anytime, and you can talk to me as long as you want.'"

The assurance that a person is not alone is key, Namuth said. Barbara is quoted in the Self-Help Sourcebook, by Edward Madera, describing self-help in this way: "You may have lost your dearest treasure - a child, your mate, health, position, reputation; but in return you may have been given a priceless gift. That gift is the ability to put your arms around another and say, ‘I know how you feel. Take my hand . . . Walk with me . . . I'll show you the way.'"

Fox wasn't afraid to speak out about issues she cared about. While working to get corporal punishment outlawed in Nebraska, she corresponded with a woman in California also working toward the same goal. The two encouraged each other and shared information.

She started a one-woman organization called "Must Go" to help get MSG removed from foods because it gave her a headache, and she figured it probably gave other people headaches, too. She made special "Must Go" stationery to increase her credibility, Namuth said.

"The power of what one person can do to change things is amazing," Namuth said.

Fox served as an example for her children, Paige Namuth and Kevin Fox, who also are active in helping others. Paige and her husband, Ron, operate Antlers Center, a residential treatment center in Lincoln. Kevin Fox works as an alcoholism and drug counselor and drives a school bus for special needs kids. But it wasn't always that way.

"We were normal kids. We weren't saints or anything," Namuth recalled. Once, when Paige was about 14 and Kevin was about 9, they wrote a letter to advice columnist Ann Landers, complaining about their parents' work. "Our parents have opened a mission in the middle of the city and they're taking in homeless alcoholic people. What should we do?" they asked.

Landers responded with a personal letter, which said "Your parents are doing a good thing, and you should try to help them." Young Paige and Kevin took her advice to heart and changed their attitudes.

"Mother led the way to making it a way of life," Namuth said. "That's what you do is you help people who are suffering."

Fox's legacy lives on in the groups she started and the influence she had on many individuals. She never wanted to be famous, Namuth said. She just wanted to help people.

"She wanted society not to marginalize people," Namuth said. "She always reached out to include people that would be left out, even if they were bad. She would walk through a room and find out everything about a person. No matter how insignificant that person seemed, they were never insignificant to her."

Georgia Stewart, who worked with Barbara and Ralph Fox for several years and volunteers with Self-Help Nebraska, said she was most impressed with Fox's commitment to helping people know that they were not alone. She was available 24 hours a day to answer the Self-Help Nebraska line, Stewart said.

"She listened, she showed great compassion and heart and understanding for people who were going through a lot of pain, and she encouraged them to do the one thing that they feared the most - which was to take the risk and go to a meeting and talk about a problem or an issue or a trauma. She always said that if you take action, then you're taking responsibility and you're also learning how to change and relying on the support of self-help groups."

The building that now serves as the Deer Springs Winery tasting room is actually the refurbished and enlarged family home that was built on the land after it was homesteaded.

Barbara Fox in 2009 by the fireplace at the Antlers Center. COURTESY PHOTO

A young Barbara Fox as a photojournalist with her speed graphic camera. COURTESY PHOTO

Winners of the Herb Lingren Strengthening Families Lincoln Award in 2001 – In front are Ron and Paige Namuth, with Kevin and Barbara Fox at center. BY ROBERT BECKER/Lincoln Journal Star