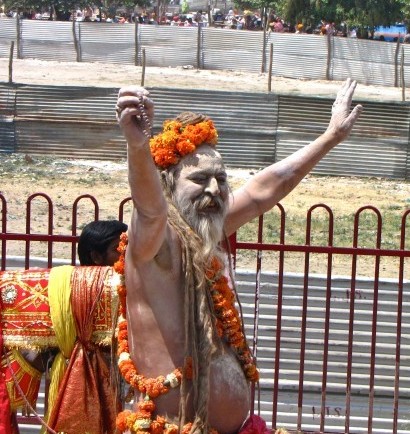 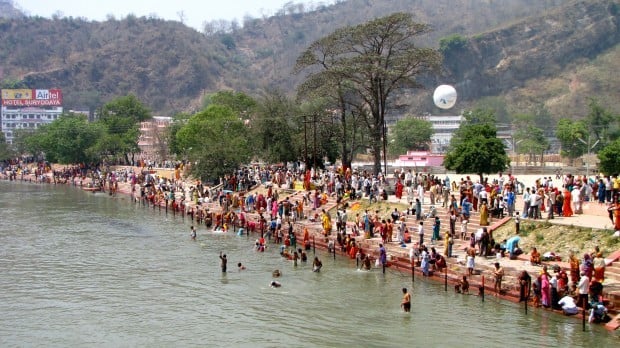 Hundreds of people bathe in the holy waters on the banks of the Ganges River at the city of Haridwar. 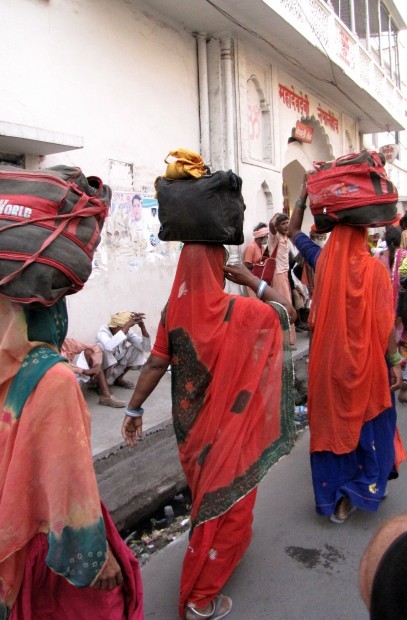 Indian women carry luggage on their heads during the pilgrimage. 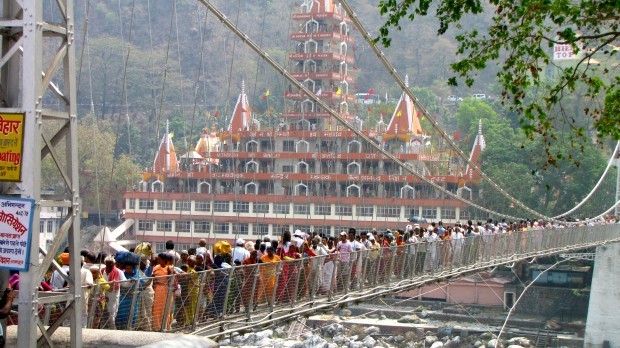 Pilgrims swarm over the Indian city of Haridwar, here crossing a bridge.

STORY AND PHOTOS BY REGINA BUSSE

My most recent travel articles in L Magazine have covered festivals ranging from the largest food fight on the planet to the largest beer drinking festival. This month, I want to introduce you to the largest celebration of faith - India's, "Kumbh Mela." This ancient Hindu celebration dates back to 10,000 B.C., drawing millions of devout followers on a countrywide pilgrimage for the opportunity to bathe for salvation!

As legend has it, the gods and demons of a time long ago found a jar of "amrita," the nectar of immortality, and for 12 days and 12 nights waged a war for its possession. During the celestial battle, four drops of the precious nectar fell to earth at four different river convergences in what are now present-day Indian cities.

Also according to the legend, only during the same astrological periods when the nectar struck the earth will the waters transform into portals of immortality, offering "amrita" to only the purest and most pious of Hindu bathers. Although no verifiable accounts of these heavenly transfigurations exist, just bathing in these divine locations on these most auspicious dates is said to cleanse both body and spirit of evil. It's an achievement of incomprehensible importance for all Hindus.

The four river convergences are located in the Indian cities of Prayag (Allahabad), Haridwar, Ujjain and Nasik. Cycling between the four cities every three years, the exact Kumbh Mela location is determined by the sun, moon and Jupiter's astrological positions. Spanning two to three months, pilgrims can bathe every day in the cleansing waters, but only a handful are deemed the most holy and auspicious.

I celebrated on such a date - April 14, 2010, when over 6 million people bathed on the banks of the Ganges River in Northern India's holy city of Haridwar.

Like a cloud of locusts descending on a vulnerable patch of green, pilgrims swarmed over the city of Haridwar. Each city block housed tens of thousands of pilgrims as makeshift, roadside camps became "home."

The sheer number of people converging on such a small area was incredible, but it was how pilgrims traveled to the festival and sustained themselves while there that proved mind-boggling. Taking days, weeks, even months of train travel, bus rides and, more often than not, walking, these pilgrimages are not for the faint of heart. Carrying only the bare essentials, one single bag was enough to hold an entire family's necessities for weeks. Its contents were usually nothing more than a few tin cups, a single canister of dried lentils and rice, a small cast iron hot plate and a blanket or two, all balanced atop the heads of wives, mothers and teenage girls.

Young or old, rich or poor, lay person or guru - this stream of humanity comprised all walks of life, from the suit-and-tie businessmen of New Delhi to the poor farmers of India's interior. And, of course, there were the endless bands of female pilgrims, wearing their best and brightest sarees. Layered in glittery bangles, flashy anklets and ornate gold nose rings, even after days of less-than-comfortable travel the women always tried to look their best.

All equal during Kumbh Mela, the only pilgrims deemed higher than the rest were India's "sadhus," or holy men. An integral part of the Kumbh Mela festivities, sadhus provide encouragement and spiritual enlightenment for the weary pilgrims. Offering their lives to the devotion of a chosen Hindu deity, sadhus rely solely on the kindness of others. Recognized by their long, unkept hair, beaded necklaces and bright orange cotton threads, most sadhus own nothing more than the clothes on their back, a small tin pale for food offerings and a walking stick.

Some sadhus fade into the shadows of humanity, focused in deep meditation and non-public devotion of their chosen deity, while others enter into more publicly acclaimed communities. They attract large followings of believers, launching them into what I like to call "Superstar Sadhu Status" (S.S.S.). Hoisted up on parade-style floats, adorned in flowers, and prayed to by millions of believers, the Superstar Sadhus are carried to the water's edge for their publicly anticipated Kumbh Mela baths.

Other sadhu sects, like the Standing and Silent Babas, also join the religious procession. But the undisputed crowd favorites are the Naga Babas, the naked holy men. Living in remote caves and focusing their days in deep meditation and hash-assisted "spiritual enlightenment," these holy men only appear in public during the Kumbh Mela. Slathered in ash and buried under layers of matted dreadlocks, Naga Babas strut their stuff (all their stuff), singing and dancing all the way to the bathing ghats.

Once at the riverbank, bathing rituals vary dramatically. Some pilgrims choose to fully submerge themselves in the cleansing waters, while others wade only to their knees, splashing faces and limbs. Many sing and chant wildly for their sins to be absolved, while others remain silent and steadfast with hands pressed together in prayer for their chance to enter nirvana.

Some 60 million pilgrims were reported to bathe in the Ganges River during the 2010 Kumbh Mela, and now I know why: faith - albeit a faith deeply rooted in superstition and karma. A faith that transcends time and spits in the face of modern-day change. A faith strong enough to replenish not only the strength of Hindu believers, but also that of outsiders. Tourists like myself, who left the festival feeling awakened and renewed!

Hundreds of people bathe in the holy waters on the banks of the Ganges River at the city of Haridwar.

Indian women carry luggage on their heads during the pilgrimage.

Pilgrims swarm over the Indian city of Haridwar, here crossing a bridge.