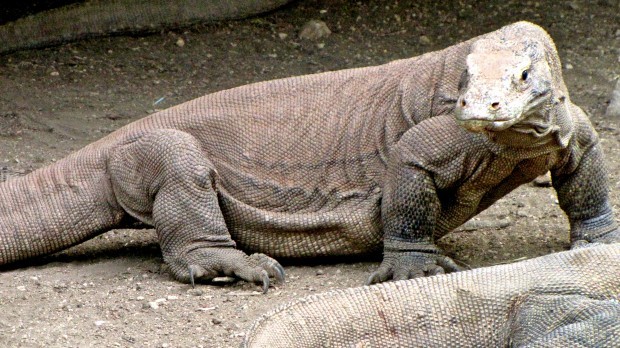 Up close and personal with a Komodo dragon. 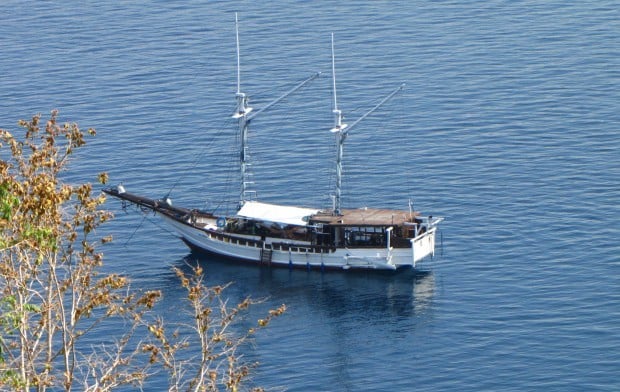 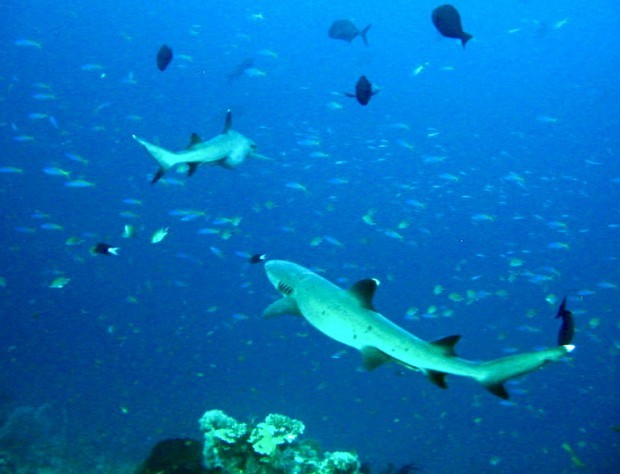 The dragons of the deep. 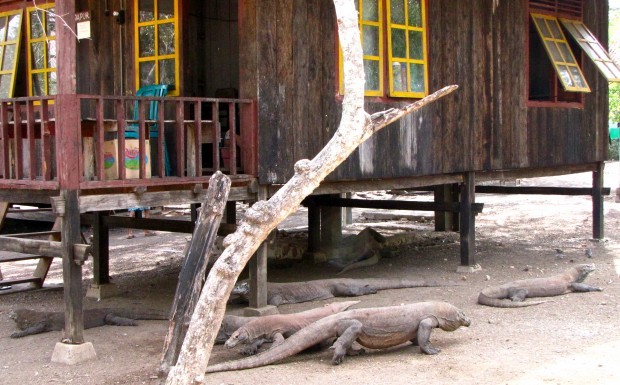 Welcomed to Rinca Island by a Komodo Dragon "reception area."

STORY AND PHOTOS BY REGINA BUSSE

By land, Komodo National Park is an island archipelago painted by arid, savannah-like terrains and a proud home to the largest lizard on the planet - the legendary Komodo dragon. By sea, the national park forms the apex of the world's marine biodiversity, yielding more species of coral and fish than anywhere else in the world. Combine the two into one amphibious safari, and you have an adventure enthusiasts dream about! The only problem is getting there.

All aboard! A revamped, live-aboard pirate ship provided the mode while seven eager wayfarers, two dive masters, three captains and one chef provided the means. Luxuries included an "open-air" bathroom, large wooden sundeck, bunk-style sleeping quarters and, of course, FOOD - exotic fruits, freshly caught seafood and fragrant Indonesian staples cooked up by the best chef these seas have ever known.

Sailing east from the Gili Islands, along the northern shores of Lombok and Sumbawa Islands, our first three days at sea saw nothing but smooth sailing and remarkable scuba diving. Less technical in nature, but unparalleled in beauty, each dive provided the opportunity to hone skills in preparation for what was to come.

A receptacle for confused currents, the waters of Komodo National Park are ravaged by whirlpools and fast-moving tides. A navigator's nightmare and a diver's ultimate challenge, the moment we breached the park threshold there was no going back!

Our dive master's main disclaimer was simple: "When we hit the water, you're on your own." Basically, if the currents swept you from a dive site, or a downward current pulled you further into the deep, the dive masters were not pursuing. Reassuring, huh?

Castle Rock, a coral-laden pinnacle resting some 80 feet below the surface, was my favorite of the dive series. Performing what's called a negative entry, the moment we broke the aquatic plane, a vigorous downward swim was required. Fierce currents and poor visibility did their best to confuse my descent, but after a few minutes of spirited swimming and rushed equalization, I saw the site!

Jackpot! Uh, more like sharkpot. As I sorted out my buoyancy, three white tip reef sharks sorted me out. Sleeping right below my fins, I thanked my lucky stars for good buoyancy - otherwise I would have landed smack dab in the middle of their bedroom. Carefully steering out of shark alley, the show continued as dozens of white and black tip reef sharks revealed themselves from behind the sea's thick blue curtain. These are recognized first by their brilliant white "smiles" and next by their prominent dorsal fins following close behind. Mesmerized by the dizzying rows of teeth and death-cold stares, I perched precariously frozen to the ledge for the most exhilarating dive of my life.

After surviving Komodo's dragons of the deep, it was time to challenge their relative above. Measuring around 8-feet long, weighing over 200 pounds and sporting some 60 teeth, the Komodo dragons represent thousands of years of carnivorous adaptation. Similar to sharks, their teeth are serrated and replace themselves regularly to assure ample flesh-tearing capabilities.

Like snakes, Komodo dragons have reticulating jaws, allowing for consumption of large prey. And akin to alligators, dragons can take down prey 10 times their size. This is due to a characteristic distinctly Komodo - a virulent, deadly bacteria injected with just one bite. As the poison moves through the bloodstream, prey become weak and eventually retreat to the nearest watering hole for recovery. The dragons know, however, there will be no recovery. Positioning themselves around the watering hole, dragons wait patiently until the animal is a breath away from death before finishing the deed, eating everything except the occasional skull or antlers.

Knowing very little about these creatures before the trip, I set foot on Rinca Island with a gleeful, landlubbing pep in my step. Practically skipping down the dusty path to the park reserve building, I was shocked to find the reception committee comprised numerous dragons. Hanging out under the shade of a few raised shacks, the dragons watched our every move. Covered in rough scales with a distinctly Jurassic build, it occurred to me that we were looking at a piece of the past - the oldest living descendent of the dinosaurs. Silent, stoic and stationary, they could have been painted into the scorched landscape if not for their one repetitive vital sign - a long, snake-like tongue, flicking about, licking its chops in preparation for its next inevitable meal.

Linking up with a local guide for an island tour, our only form of protection came in his 5-foot-nothing, buck-ten soaking wet frame and long, wish-boned stick. He assured us of safety, but when we uncovered the first water buffalo skull, my heart sank. The reality of what we were doing washed over. The dragons may appear slow with a laborious, four-legged strut, but their lightning-fast reflexes and toxic bite were not to be underestimated. Some sprawled across rocks soaking in the sun, while others patiently waited in the dry bush. But every dragon spotted had one thing in common - they never took their eyes off us!

After eight days of sailing, a dozen world-class scuba dives and a trip to see the infamous dragons, we dropped anchor back in the Gili Islands $1,000 poorer. But we felt a million times richer, having experienced all the wonders of Komodo National Park in the most spectacular of ways!

New to the game? Take a lesson

If you are just taking up the game of golf, here's a quick tip from someone who could use another lesson soon.

Up close and personal with a Komodo dragon.

The dragons of the deep.

Welcomed to Rinca Island by a Komodo Dragon "reception area."