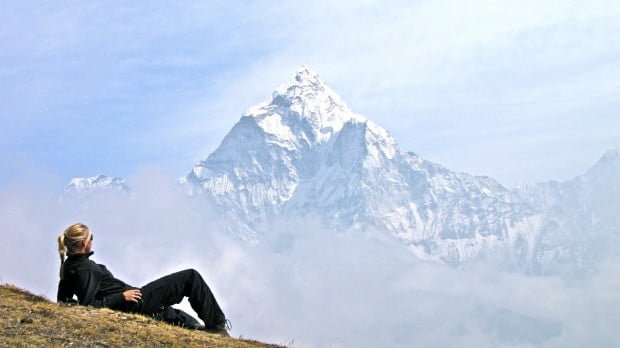 Dreaming big: L Magazine travel writer Regina Busse, shown here at the breathtaking Nepal Vantage Point during one of her many worldwide adventures, is a finalist to become the Mutual of Omaha Wild Kingdom TV series' next Wild Guide Host. But she needs your vote now through May 23rd! See below to learn how. COURTESY PHOTO 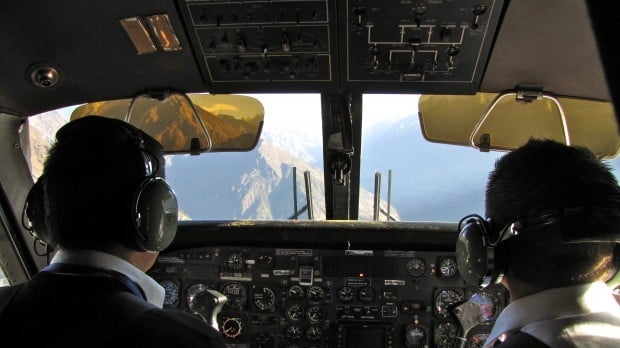 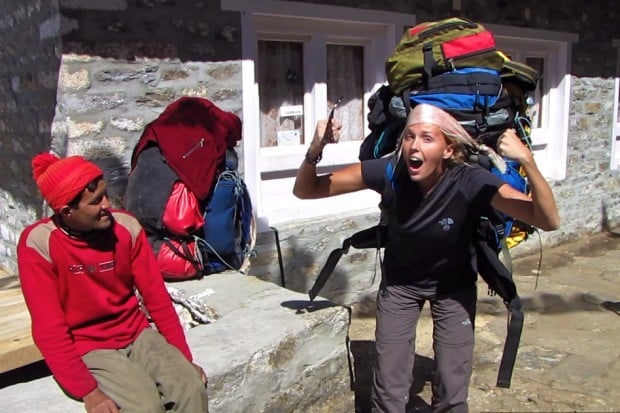 “Sherpa Reg” says her back still hurts from this experience! COURTESY PHOTO 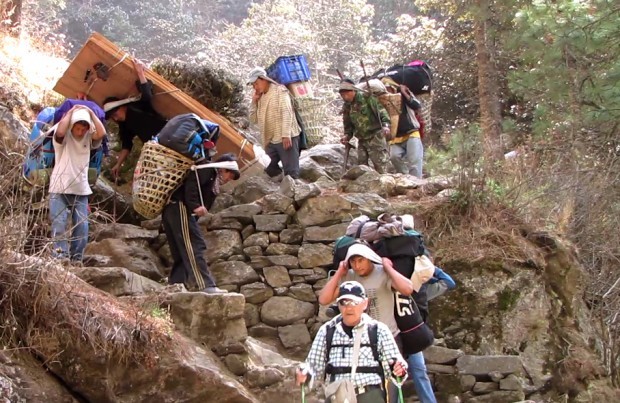 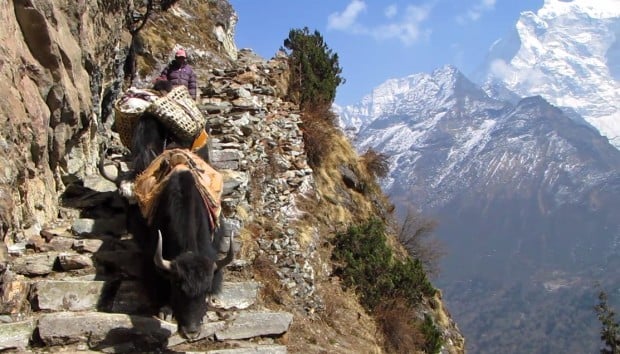 What is it about Everest that draws people to her cold embrace? Is it the fame produced by summiting? The respect generated by attempting? Or to simply check it off one’s personal bucket list?

Known to the local Sherpa people as Sagarmatha, or Goddess of the Sky, Everest was never meant to be summited. It was a place of the gods – a place no man should go. But thanks to Sir Edmund Hillary’s famous 1953 ascent, Everest’s cloudy curtain was thrown back and her glory revealed to thrill seekers everywhere!

Full-fledged summit attempts are the most well-known expeditions, but for those lacking high-altitude climbing experience, not to mention a spare $50,000, Everest Base Camp (EBC) is a fantastic runner-up! Resting at an impressive 17,600 feet above sea level, EBC signals the last checkpoint non-skilled climbers can tag before turning back.

Your journey to Everest can begin one of two ways. One if by land …two if by…air? The first route requires a long, winding bus ride from Kathmandu to the remote village of Jiri. From here, two weeks of intense up and down trekking lead to the town of Lukla, the starting point of the Everest Trail. If you’re short on time, however, daily flights from Kathmandu to Lukla can be arranged for about $200. Flying into one of the highest and most dangerous airports in the world, I promise it will be the most exhilarating 30 minutes of your life!

A quick taxi onto the battered runway, followed by the deafening groan of our 14-seater otter plane, and we were off! The bustling streets of Kathmandu were soon replaced by rows of vibrant rice paddies and a dramatic Himalayan backdrop. Flying what felt like inches from the endless array of snowy peaks, I was lost in a blissful reverie until suddenly the captain crackled onto the P.A., “Prepare for landing.”

Completing two wide downward spirals, I caught my first glimpse of Lukla’s meager airstrip – an abbreviated line of tarmac, scarcely longer then a football field, originating at the edge of a 9,000-foot sheer cliff face and terminating at the base of a giant mountain.

Picking up speed on the approach, my eyes remained uncomfortably glued to the front windscreen and the enormous mountain face now filling it. “THUD...ERRRRRR!!” Practically thrown from my seat on impact, our breakneck speed was instantaneously reduced to a crawl. Phew, we had survived – I mean arrived – at Tenzing-Hillary Airport, named in honor of the first two men to summit Everest, Sir Edmund Hillary and Tenzing Norgay.

Stepping into the brisk Himalayan air, I was surprised to discover just how cold it was at 9,000 feet. Attuned to the sweltering heat of Kathmandu, the icy air swept over me like a popsicle in a deep freeze. Layering up and slurping our first of many cups of tea, the national park registry was now all that stood between us and Everest … and about seven days of climbing!

Spending our first night in the Monjo village, we began day two with an intense uphill assault to Namchee Bazaar. Only 2,000 feet higher then where we stood, the distance was relatively small but the unexpected roadblocks were not. Yaks! Slowly plodding around the narrow switchbacks, dozens of stinky, sluggish yaks created a virtually impassable barrier of backsides. Strapped with crude, wooden-framed saddles and overloaded with provisions, about the only thing the yaks weren’t carrying was regard for trekkers. One overzealous step by hikers could result in a painful kick to the shin; or worse, a yak bump down the steep embankment. Dawdling tour groups also added to the long line of congestion, snapping photos of nearly every trekking nuance, at a pace passable by even the ponderous yaks.

Namchee is what many trekkers consider their last chance for civilization. A charming Sherpa village, it buzzes with porters, trek leaders and hopeful expedition participants. Not to mention overpriced internet cafes, bakeries, and pizzerias. Not exactly what I expected on the road to the top of the world.

Commercialization aside, Namchee maintains one of the most immaculate cityscapes in the Everest region. Facing a semi-circle of snow-covered peaks, the township sprawls over the adjacent hillside. Columns of steep, weathered stone steps pulse travelers to and from the Everest Trail while shimmering prayer wheels, attractive teahouses and lively shop advertisements welcome weary travelers.

Choosing the cheapest teahouse possible, we settled in for the evening. Little did we know our humble teahouse owner would be serving more then just Dal Bhat (rice and lentils) that night. A retired mountain guide himself, he served us a plan! A plan to get off what we termed the “Everest Superhighway” and onto the road less traveled! Unfolding a crisp new map, his eyes glinted to life, and as if out of a movie he proclaimed, “The most incredible route will also be the most difficult – are you ready?” Confident albeit naïvely, we exclaimed, “YES!”

Check out the exciting conclusion in next month’s edition, “Goddess of the Sky - Part II.”

Dreaming big: L Magazine travel writer Regina Busse, shown here at the breathtaking Nepal Vantage Point during one of her many worldwide adventures, is a finalist to become the Mutual of Omaha Wild Kingdom TV series' next Wild Guide Host. But she needs your vote now through May 23rd! See below to learn how. COURTESY PHOTO

“Sherpa Reg” says her back still hurts from this experience! COURTESY PHOTO