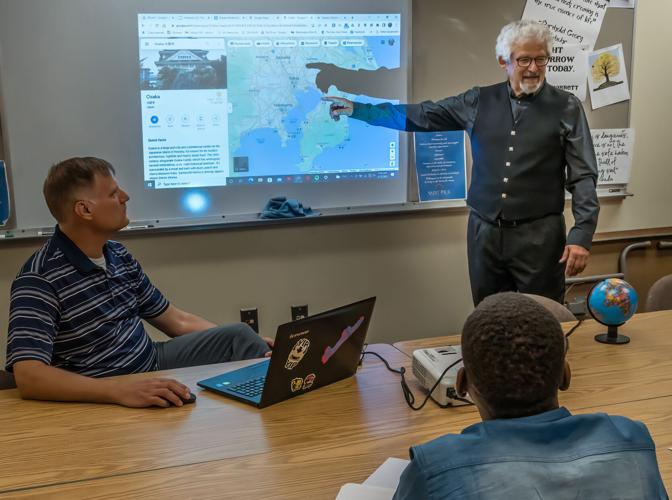 Clay Naff guest-teaches a class at Lincoln Literacy. At left is longtime tutor Dan Holmberg, who is the regular, long-serving tutor in the citizenship class. 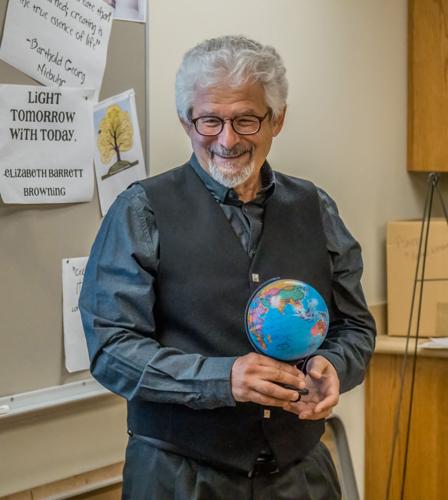 In 16 years as executive director, Clay Naff has dramatically expanded the reach of Lincoln Literacy's programs.

Clay Naff loves telling stories about the people who have been sustained and strengthened by Lincoln Literacy. In fact, he can’t help himself.

The widow from Afghanistan who arrived with six children and little else, came to Lincoln Literacy for support and now runs a food truck with her sons. The orphaned teenager from Guatemala who spoke no English, had no money, rocketed through language classes and is now a certified nursing assistant. The refugee who works at Kawasaki.

“I am proud of what we’ve done at Lincoln Literacy. I care so much about the mission and the people we serve,” Naff says. “Lincoln Literacy is a community of caring, learning and kindness – connected across all cultures and languages – and I hope those values will endure.”

Warm, gracious and wise, Naff is a man who truly loves his work – perhaps a bit wistful about retiring after 16 years serving as executive director of Lincoln Literacy. After all, this is a man who has dramatically expanded the reach of the agency, broadened support and innovated services to help refugees and immigrants find a better life in Lincoln. This is a man whose colleagues say is passionate and strong, capable and strategic – a man with a good-natured sense of humor – a man who is known for stepping in when a class’s child care provider doesn’t show up.

“Clay has worked tirelessly to help make Lincoln a place where immigrants and refugees feel welcomed,” says Janet Eskridge, president of the Lincoln Literacy Board of Directors. “During his tenure, Lincoln Literacy has grown tremendously. English language classes are taught in a variety of settings … We offer classes to help people obtain job skills. We provide child care. Transportation is offered. Clay has done everything he can to remove barriers and challenges for the immigrant and refugee community. His leadership has been a gift to the organization and to the city of Lincoln.”

Lived in three countries before he was 10

Believe it or not, Naff says with a smile, once upon a time he wanted to be an astronaut. But his early years pointed him down a different path. Born in California with parents who attended Berkeley, he lived in three different countries before he was 10 as his father pursued graduate work in England, Turkey and Egypt. When the family finally landed in Philadelphia, Naff tutored a lad from Bangladesh who lived next door. And days after Martin Luther King Jr. was assassinated, Naff canceled a boyhood birthday party and asked kids to donate for social justice.

“I think my parents gave me the broadest possible exposure to people in the world – encouraged friendships across races – told me to live a meaningful life that was helpful to others.”

In some ways, Naff says thoughtfully, “it feels like everything came together at Lincoln Literacy … that the skills from a tumultuous childhood worked well for me. The majority of people we serve have been dislocated, prompted to leave their homes often due to terrible conditions … Certainly I have not struggled like them, but I lived through some of the same things they have, learning a different language, confused by street signs and menus, grocery shopping when I didn’t know the language.”

Naff graduated from the University of Pennsylvania with a major in English – “and I was doomed to become a journalist,” he says. Over the following years he worked a crazy quilt of jobs as a reporter, university news editor, science writer, foreign correspondent in Japan. Somewhere along the way, he served as an advocate for science education, worked as news director at KZUM, wrote a book about social change in Japan – and eventually dipped his toe into nonprofits at Community Action Partnership of Lincoln.

“And yet for all that, nothing compares with the immensely gratifying experience I’ve had leading this wonderful organization for the past 16 years,” he says. “Lincoln Literacy has not only been the best professional experience of my life, it has given me daily engagement with some of the most wonderful, admirable people I've ever known: our staff, our students, our volunteers and our board. It’s truly been a privilege.”

When Naff arrived at Lincoln Literacy in 2006, he found a solid foundation to build upon, but imagined a bigger vision: “I like to picture pulling together threads that other people have been weaving into a pattern, but seeing the wider tapestry of services … Early on, we wrote a proposal for an English Language and Learning Academy through partnerships with various community organizations … and Tom Woods was the first funder to entrust us.”

Woods, president of the Woods Charitable Fund, remembers it well:

“Clay's talent and experience … his commitment and passion for the agency's mission – and his care for the people it served – were clear in everything he wrote and shared. Under his leadership, Lincoln Literacy has grown in its scope and ability to serve a wide range of people, to learn and master English but also gain needed job skills to build better lives for themselves and their families. Lincoln Literacy plays a key role in what makes Lincoln a truly welcoming city.”

Naff claims the secret to the agency’s success is quite simple: his staff.

“My goal has always been to create a nurturing, uplifting work culture. I am not the king of Lincoln Literacy; I am the person who supports the people who make it happen. This is truly heartwarming work, and it is easy to be motivated.”

Naff is a great example of what it means to empower others and cultivate a strong community – according to Sanela Ganic, a former refugee who now teaches business classes at Southeast Community College.

“My family and I came to America as refugees, and we would not be where we are now if we did not have support from people like Clay who believed in us,” she says. “He created a vision for Lincoln Literacy that is built on a deep sense of caring for one another, valuing each employee’s strengths and a genuine desire to help others make Lincoln home … He shows compassion and consideration for everyone working at Lincoln Literacy. Those of us who got the privilege of working alongside Clay know that this was not just a job to him – it was Clay’s passion.”

Naff says that passion comes from the people he serves. “It is impossible not to be inspired by people who come to us every day, people who were often forced to leave their homes, who work hard to put food on the table – and yet manage to come to us and learn how to speak English … I am proud of how we have grown, diversified. We are helping so many immigrants and refugees fulfill their potential, gain the skills necessary to not only live but thrive here in Lincoln.”

He sees the role of Lincoln Literacy as “filling in potholes on the bridge to a better life” – and it has indeed smoothed the road.

• In 2006, the agency launched the English Language and Literacy Academy (ELLA), growing into a citywide network of learning centers, primarily for adult English language learners.

• In 2020, the CNA program expanded to become Bridgeway to a Better Life, selected as the Woods Charitable Fund Breakthrough Initiative of the year – a groundbreaking program to help adult learners gain English language literacy, guide them through occupational and life skills training, then connect them with higher education and employment.

“Lincoln Literacy today is vastly different from the organization Clay took over 15 years ago,” says Tasha Everman, assistant dean of the University of Nebraska-Lincoln Law College and one of the board leaders who hired Naff.

“Although the core mission remains the same … we now serve more members of the community than ever before and in so many ways … we’ve expanded to include prep programs for nursing assistants and paraeducators, jobs skills classes, financial and computer literacy programs. The Bridgeway to a Better Life Initiative and ongoing support of national foundations can all be attributed to Clay’s leadership, grant-writing skills and passion for the work.”

Naff leaves Lincoln Literacy later this year, deeply grateful for a caring community – “a welcoming, open-hearted resettlement community” – as well as the honor of doing work he valued.

“I am ready to pass the torch … I am looking forward to downshifting, simplifying my life a bit.”

He wants to improve his tennis game. Travel. Get back to writing. Enjoy his family, his wife Tari and his beloved daughters. Perhaps – after a new director is named and has time to begin the job – Naff will even volunteer at Lincoln Literacy.

“Yes, it’s easy to get frustrated with the world right now,” he says. “But you know, good things surprise us at least as often as bad things … I see plenty of hope out there, so much hope.”

A bit of history

Lincoln Literacy started in 1972 as a small civic group with a handful of volunteers, increased its range of services in the early 1990s with a major wave of immigration, and truly ramped up after a 2005 Woods Charitable Fund grant. The award-winning agency works to strengthen the community by teaching English and literacy skills to immigrants, refugees and homegrown Americans – with support from nearly 250 trained volunteers. The community-based nonprofit also helps businesses find, train and retain skilled and literate workers, and boosts children’s ability to succeed in school and adults’ ability to thrive on the job.

The guys in red blazers have a colorful history

Clay Naff guest-teaches a class at Lincoln Literacy. At left is longtime tutor Dan Holmberg, who is the regular, long-serving tutor in the citizenship class.

In 16 years as executive director, Clay Naff has dramatically expanded the reach of Lincoln Literacy's programs.