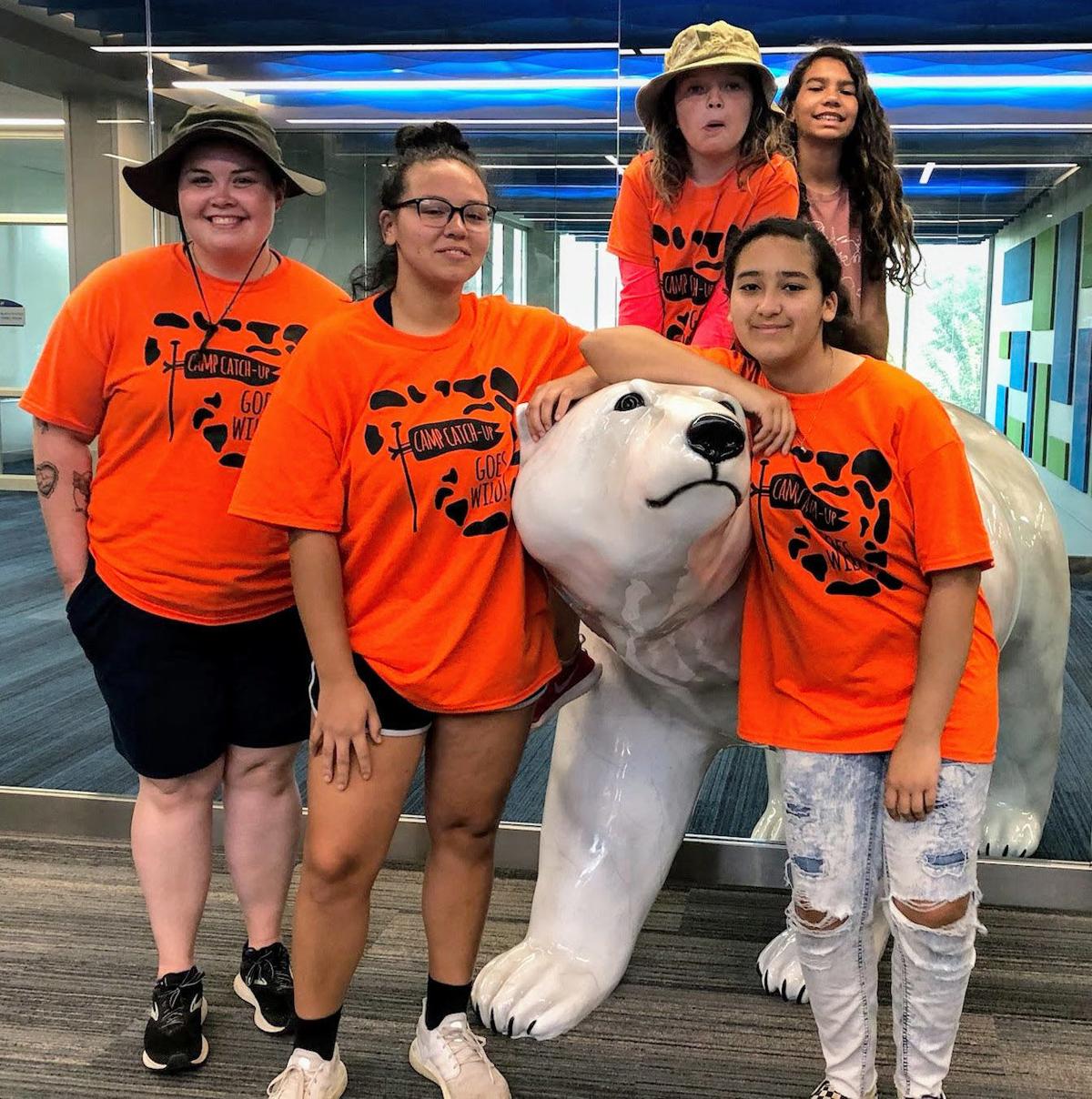 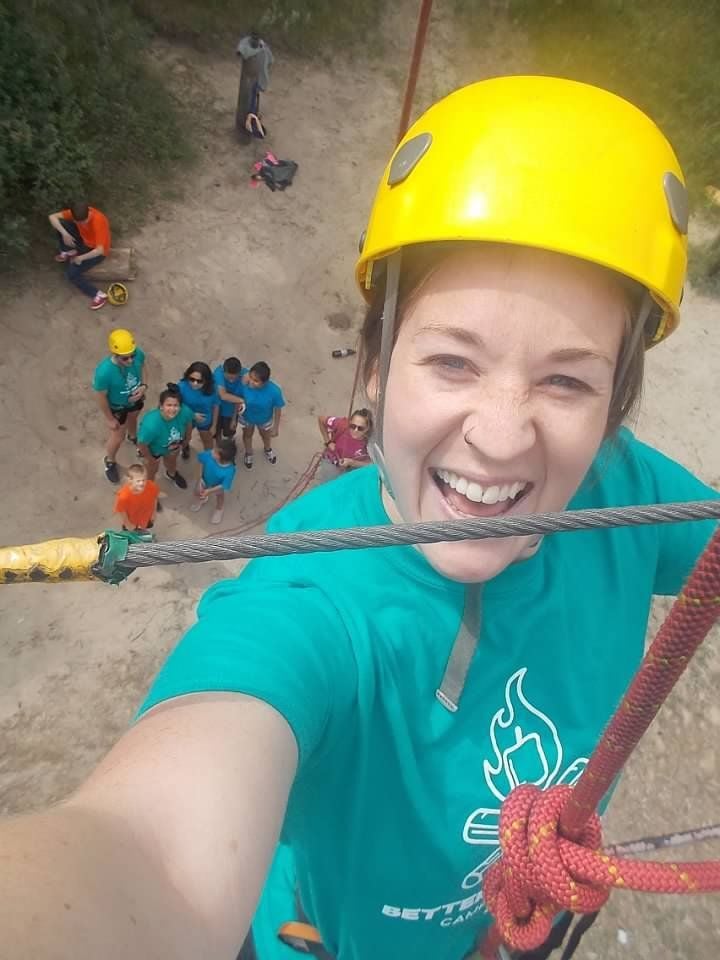 Getting ready to zipline at Camp Catch-Up. 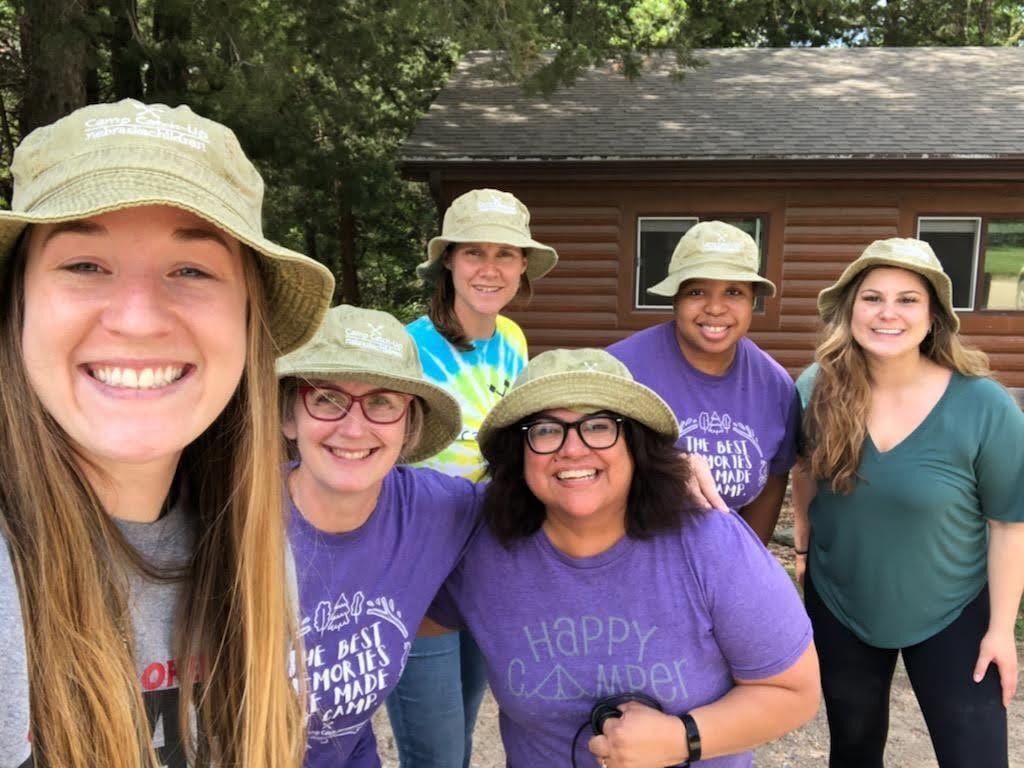 For the second year, Nebraska Children and Families Foundation received a grant awarded by the Viking Foundation for Camp Catch-Up. Since 2003, this special Thursday through Sunday camping experience brings together siblings, ages 8 to 19, who are legally separated through foster care, adoption or out of home placement. It’s a chance for siblings to reconnect and make memories with each other.

The foundation was started in 1997 as Nebraska’s solution for strengthening families so children can reach their full potential in life. Nebraska Children leverages funds from both public and private sectors and pools talent from the state toward the goal of a good life for all of Nebraska’s kids.

This year’s camps have added poignancy because the pandemic response prevented some siblings from seeing each other for almost two years.

“The only requirement we have is the kids have to live separately – unfortunately – from one another,” said Mona Tarin, full-time camp director.

Camp is a joyful situation that can also bring along some emotional baggage. The Viking Foundation of Lincoln appreciated the value and impact of Camp Catch-Up, said board member Roseann Christensen.

”Our board members were aware of the immense difficulties foster children face due to separation from their families,” she said. “To that end, we believed that funding activities to periodically reunite separated siblings would be an excellent way to provide a means for them to see and continue to support one another.”

The main goal of Camp Catch-Up is summer fun, adventure and making great memories. Several multi-day camps take place each year, divided between western and eastern Nebraska, plus some sleepover camps or single-day gatherings at other times during the year.

Because of the pandemic, the number of families at each camp and number of camps was reduced for 2021. In early July, campers from 12 families gathered at the state 4-H campground in Halsey. Most recently, there was an overnight camp at Henry Doorly Zoo in Omaha. Up next, Sept. 24-26, is another full camping experience at Camp Solaris in Firth, plus smaller events like pizza parties, bowling or pumpkin carving.

Camper-in-chief Tarin does it all, including contract negotiations with the sites and coordinating free transportation for the campers.

“I have an awesome staff that supports me during the year, plus we have a lot of staff that come join us from other professional jobs, and former campers who want to give back to anyone that wants to help,” Tarin said. “At the end of a camp, we pack everything away until the next time – some of it is stored at my house.”

Tarin has a bachelor’s degree in social work and worked in foster care in Scottsbluff and North Platte before moving east to Lincoln.

First-time campers each receive a good quality sleeping bag, pillow and rucksack. The siblings are presented with colored T-shirts to wear – each family has their own color. While the grant from Viking Foundation primarily goes toward operating expenses, Tarin was able to get especially good, personalized water bottles and bucket hats for each camper to take home this year, plus more art supplies. The kids love art projects and campfires – lots of campfires, she said.

Each camp costs about $11,000, but that doesn’t include funds for extras, s’mores, prizes, transportation, staff training – including excellent trauma training – and stipends. “It’s expensive, but so worth it!” said Tarin.

There’s always the requisite last-night camp talent show, but the camp’s location and amenities dictate some of the activities the siblings do together like swimming, rock climbing, tubing or ziplining. Tie-dying almost anything is always popular.

Campers also each paint a picture frame when they first arrive, and when they leave it’s filled with a picture of the siblings at camp. This year, there were scrapbooks to take home, too, filled with photos taken by the campers and the official camp photographer.

Gaga Ball, described as a kinder gentler version of dodge ball, has become a popular activity. It’s a fast-paced, high-energy game, played in a low pit with a foam ball that’s aimed at players’ feet. It’s easy for kids of all ages and skill/coordination levels to figure out. Last kid in the pit wins.

Depending on the circumstances and family dynamics, some siblings may only see one another at camp, while others see each other more frequently, Tarin related.

“One little guy stood up the last day at camp and said, ‘I just want to thank you for this camp, because my mom doesn’t follow through on her business and I never get to see my sisters.’ I was just like, OMG! That’s why we do this!”

See https://campcatchup.org for more information or to register a sibling, or contact Mona Tarin at 402-613-6357. Information about Nebraska Children and Families Foundation can be found at https://www.nebraskachildren.org.

The Viking Foundation of Lincoln was created in 2012 to help improve and enrich the lives of individuals, especially children, who are less fo…

Getting ready to zipline at Camp Catch-Up.