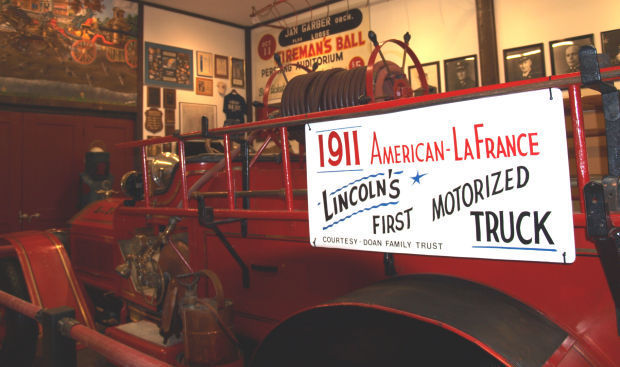 The museum features the only 1911 American-La France motorized engine in working condition in the United States. 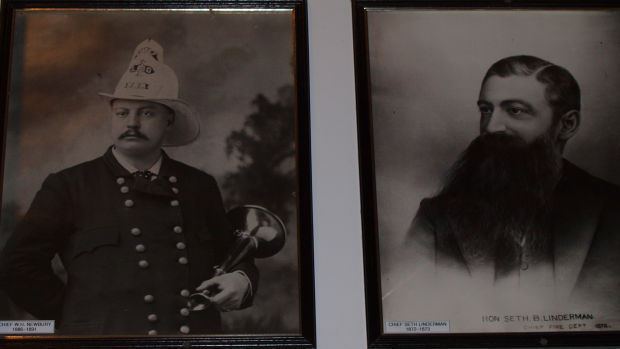 Two of Lincoln’s earliest fire chiefs, W.H. Newbury (left) and Seth B. Linderman, are pictured at the museum. Newbury is shown with a speaking trumpet, and Newbury happens to have a long beard – a common characteristic for earlier firefighters. Before going to fight a fire, they would douse their beards in water and use their facial hair as a kind of respirator. 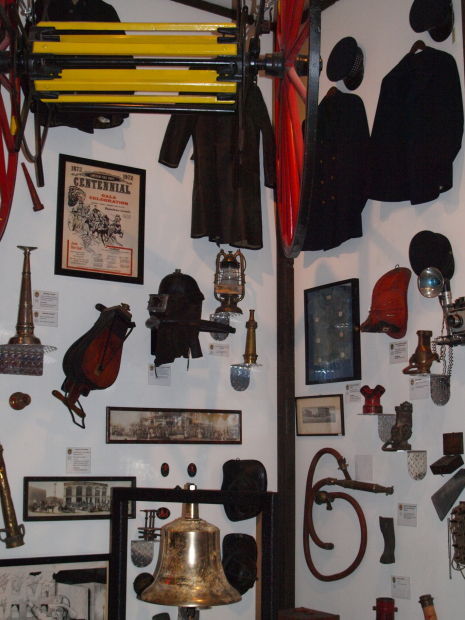 Some of the early firefighting equipment including a breathing apparatus that features bellows.

STORY AND PHOTOS BY GRETCHEN GARRISON

If your attic held a century of items, a garage sale would probably be in order. After 100 years of serving our community, the Lincoln Fire and Rescue Department decided to create a museum with its collection of memorabilia.

In 1982, Fire Station One set up a room full of former firefighting equipment and covered the walls with pictures donated by the Lincoln Journal Star. All of the materials were donated by local businesses, including the former Miller & Paine department store, which donated display cases.

Over two decades later, though the museum seemed to become a catch-all for items that no one knew quite what to do with, Lincoln Fire and Rescue Chief John Huff decided that a facelift needed to happen. “This became a community effort similar to the original project,” he says.

With help from some interns, firefighters, two of Huff’s former classmates and other volunteers, the room was completely emptied. First, they painted the walls. Just like all remodeling projects, that led to a painted ceiling, updated flooring and a new set of bay doors.

Because the black-and-white pictures were starting to curl and crumple, they were digitized and can be seen on the room’s small television. Someday, LFR hopes to showcase the photos online, but that will be a big volunteer project as well.

“This allows others to see Lincoln firefighting from its inception to where we are today,” Ripley says. “By starting over, we were able to pick items that have sentimental value to not just the firefighters but to the citizens of Lincoln.”

The museum’s centerpiece display is a 1911 pumper truck. Donated by local businessman Ron Doane, he keeps this item of historic significance on permanent display with one stipulation: Once a year, he gets to ride around in the truck. While Chief Huff thinks this is a fun tradition, he notes that it could be problematic in the future because “only one firefighter actually knows how to start this antique truck.” The large truck is both Chief Huff’s and Captain Ripley’s favorite item, but they appreciate other items as well.

For his part, Huff is glad for the speaking trumpet that is on display. While the trumpet has been replaced by more effective communicative tools, back then the instrument gave fire chiefs a voice to talk to their firefighters.

“Even today, that trumpet is a symbol of authority,” Huff says. “The number of horn symbols that firefighters wear signifies their rank. As a fire chief, I have five.”

As for Ripley, he appreciates the old firefighting gear.

“My grandpa was a volunteer firefighter in a small town,” he says. “Seeing the old equipment reminds me of him and brings back fond memories. I remember why I originally wanted to be a firefighter.”

Other items you won’t want to miss in the museum? According to Huff, the old breathing apparatus consisting of wooden bellows and a leather mask along with glass pieces is rather unique. If you also look closely on the upper ledge, you can see the first portable radio the firefighters used to lug around. At three feet long and one foot tall, the word “portable” might be a bit of a stretch.

One of the department’s early phone systems is also on display. With over 100 buttons, one has to wonder how the firefighters kept all of the lines straight.

When we toured the fire station museum, we had two different firefighter tour guides. Both were called out. Rather than being frustrating, this added significance to our visit.

Ripley notes that having a call speaker in the museum allows visitors “to see the past and hear the present.” By having this museum actually in a fire station, you can visibly understand the significant difference that LFR is still making in Lincoln today.

Continuing to update the displays will be a priority. Already the 9-11 flag picture is mounted to honor the sacrifice of New York City’s fire department. With a museum of this type, Ripley notes that “not all are positive memories. The essence of our job can involve tragic events that we deal with as a firefighting family.” Besides recalling history, this firefighting museum celebrates that camaraderie that can be found among the men and women who bravely serve.

To tour the museum, stop by 1801 Q St. between 9 a.m. and 8 p.m. daily. If you call ahead to 402-441-8360, you can make sure firefighters are not out training or on a large call. Getting to interact with the firefighters added so much more meaning to our experience. But you do need to know that they may not get to stay and chat for long if a call comes. They have a community to serve.

The museum features the only 1911 American-La France motorized engine in working condition in the United States.

Two of Lincoln’s earliest fire chiefs, W.H. Newbury (left) and Seth B. Linderman, are pictured at the museum. Newbury is shown with a speaking trumpet, and Newbury happens to have a long beard – a common characteristic for earlier firefighters. Before going to fight a fire, they would douse their beards in water and use their facial hair as a kind of respirator.

Some of the early firefighting equipment including a breathing apparatus that features bellows.