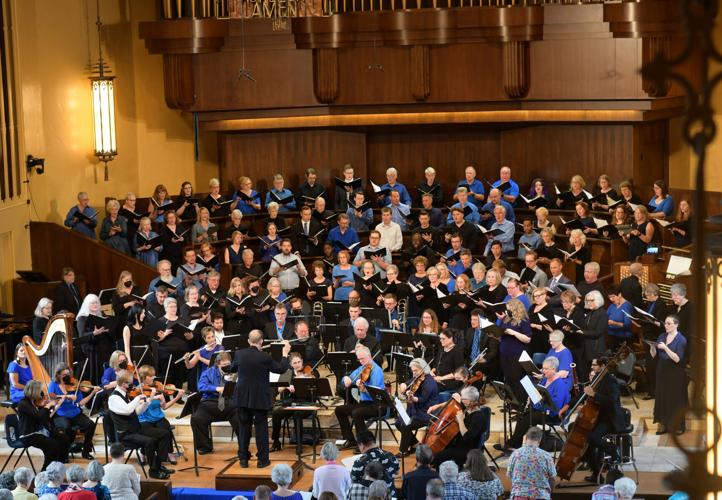 Abendmusik Founder Jack Levick conducts the Abendmusik Chorus, alumni and Chamber Orchestra during a concert celebrating the 50th anniversary of Abendmusik May 29 at First-Plymouth Church. 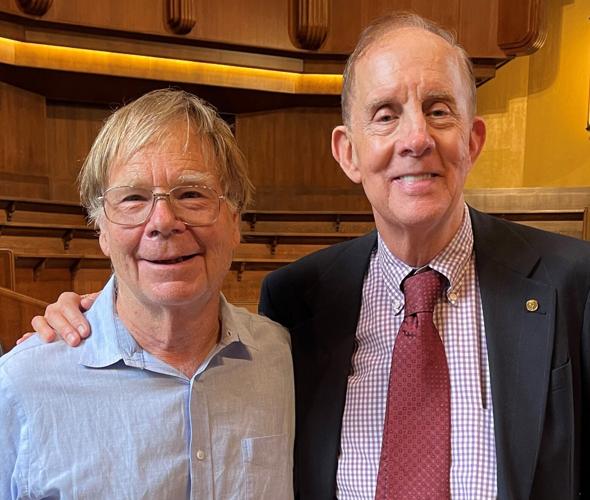 Dr. Frank Thompson (left), who sang in the first Abendmusik concert in 1972, joined the alumni reunion chorus and Abendmusik founding conductor Jack Levick (at right) for the 50th anniversary concert. 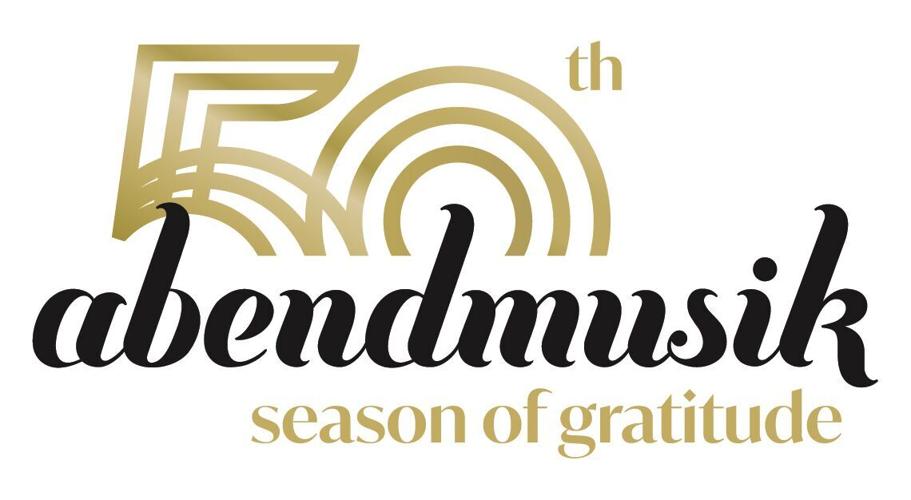 BY JULIA DOERR FOR L MAGAZINE

Abendmusik at First-Plymouth Church celebrated its 50th year of providing inspiring concert experiences for Lincoln audiences and musicians, culminating over the Memorial Day weekend with a three-day reunion and concert performance by the Abendmusik Chorus.

Jack Levick, founding conductor and former First-Plymouth minister of music, returned from his current home in Virginia for the festivities and was honored for his vision and hard work in birthing Abendmusik in 1972 and shepherding the program through its first 32 years. Levick spoke to the group about how he could never have expected that Abendmusik would become so well established and successful that it would be celebrating five decades of service to the community in 2022.

Also returning was former conductor Jeremy Bankson, who composed a new hymn arrangement for the occasion. Bankson traveled from Ohio to share in conducting duties for reunion rehearsals and performances.

Notably, two reunion participants were among those who sang in the very first Abendmusik concert 50 years ago. Lorrie Beadell Love was the soprano soloist in that first performance of Vivaldi’s “Gloria.” She later joined the choir and has sung with Abendmusik for more than 30 years.

Dr. Frank Thompson sang in the tenor section in that first concert and for several years as a graduate student at the University of Nebraska-Lincoln. He returned from North Carolina for the reunion weekend, and he and his wife Beth were concert sponsors along with the estate of longtime chorus member Laurel Ann Berg Muff.

In addition to rehearsals and the concert, two emotional highlights of the reunion weekend were a short memorial service on Saturday morning, which honored choir members known to have died during the past 50 years, and a Saturday evening banquet at the Cornhusker Marriott. A nostalgic slide show, plus the humor and memories of the two emcees and the conductors, made the program especially meaningful for attendees.

On Sunday afternoon, First-Plymouth carillonneur Kathie Johnson performed a pre-concert recital on the newly refurbished First-Plymouth carillon before the 50th anniversary gala concert at 4 p.m. Repertoire for the Abendmusik Chorus, alumni and the Abendmusik Chamber Orchestra featured several pieces of historical significance to Abendmusik, including one movement from the original performance of Vivaldi’s “Gloria.” Composer Robert Beadell’s 1994 arrangement of “Amazing Grace,” performed on the choir’s trip to England that year, featured soloist Ariel Merivil, First-Plymouth’s current associate minister of music. Ralph Vaughan Williams’ lush “Serenade to Music,” new to the choir this year, provided a showcase for several soloists – both current choir members and recent alumni.

And one of the choir’s longtime standards, Parry’s “I Was Glad,” provided a stirring finale to this celebration of 50 years of music that inspires.

Like Watson, many of today’s tour stars are easy to root for

In May and June, I was fortunate enough to see some of the game’s biggest stars in person -- first at the PGA Championship in Tulsa, Oklahoma,…

Orphan Grain Train provides food, supplies and clothing for those in need

Orphan Grain Train (OGT) is a volunteer network that ships donated food, clothing, medical supplies and other needed items to people in 69 cou…

Executive Vice President and Provost Emerita, University of Nebraska, and winner of the 2021 Excellence in Education Inspire Award

Cooks Café has survived and grown for 35 years

Through changes in locales and facing the COVID-19 pandemic, Cooks carries on.

The Lied Center for Performing Arts has announced that its 2022-2023 season will feature more than 30 events, including top artists and ensemb…

Soiree thanks Friends of Opera members for their support

Friends of Opera members and their guests were treated to a May 21 soiree at the home of Joan Hruza, 2501 Sheridan Blvd., featuring eight perf…

Annual Around the World gala raises $13K for GIRLPowR

Abendmusik Founder Jack Levick conducts the Abendmusik Chorus, alumni and Chamber Orchestra during a concert celebrating the 50th anniversary of Abendmusik May 29 at First-Plymouth Church.

Dr. Frank Thompson (left), who sang in the first Abendmusik concert in 1972, joined the alumni reunion chorus and Abendmusik founding conductor Jack Levick (at right) for the 50th anniversary concert.