MOSCOW (AP) — Kazakhstan is experiencing the worst street protests the country has seen since gaining independence three decades ago.

The outburst of instability is causing significant concern in Kazakhstan's two powerful neighbors: Russia and China. The country sells most of its oil exports to China and is a key strategic ally of Moscow.

A sudden spike in the price of car fuel at the start of the year triggered the first protests in a remote oil town in the west. But the tens of thousands who have since surged onto the streets across more than a dozen cities and towns now have the entire authoritarian government in their sights.

President Kassym-Jomart Tokayev has cut an increasingly desperate figure. He first sought to mollify the crowds by dismissing the entire government early Wednesday. But by the end of the day he had changed tack. First, he described demonstrators as terrorists. Then he appealed to a Russian-led military alliance, the Collective Security Treaty Organization, for help in crushing the uprising and the CSTO agreed to send an unspecified number of peacekeepers.

Why are people angry?

Of the five Central Asian republics that gained independence following the dissolution of the Soviet Union, Kazakhstan is by far the largest and the wealthiest. It spans a territory the size of Western Europe and sits atop colossal reserves of oil, natural gas, uranium and precious metals.

But while Kazakhstan's natural riches have helped it cultivate a solid middle class, as well as a substantial cohort of ultrarich tycoons, financial hardship is widespread. The average national monthly salary is just under $600. The banking system has fallen prey to deep crises precipitated by non-performing loans. As in much of the rest of the region, petty corruption is rampant.

The rally that set off the latest crisis took place in the dusty western oil town of Zhanaozen. Resentments have long festered in the area over a sense that the region's energy riches haven't been fairly spread among the local population. In 2011, police shot dead at least 15 people in the city who were protesting in support of oil workers dismissed after a strike.

When prices for the liquified petroleum gas most people in the area use to power their cars doubled overnight Saturday, patience snapped. Residents in nearby cities quickly joined in and within days large protests had spread to the rest of the country.

Who is leading the protests?

The suppression of critical voices in Kazakhstan has long been the norm. Any figures aspiring to oppose the government have either been repressed, sidelined, or co-opted. So although these demonstrations have been unusually large — some drawing more than 10,000 people, a large number for Kazakhstan — no protest movement leaders have emerged.

For most of Kazakhstan's recent history power was held in the hands of former President Nursultan Nazarbayev. That changed in 2019 when Nazarbayev, now 81, stepped aside and anointed his long-time ally Tokayev as his successor. In his capacity as head of the security council that oversees the military and security services, Nazarbayev continued to retain considerable sway over the country. Tokayev announced Wednesday that he was taking over from Nazarbayev as security council head.

Much of the anger displayed on the streets in recent days was directed not at Tokayev, but at Nazarbayev, who is still widely deemed the country's ultimate ruler. The slogan "Shal ket!" ("Old man go") has become a main slogan.

How are the authorities responding?

A police official in Almaty said Thursday that dozens of protesters were killed in attacks on government buildings. At least a dozen police officers were also killed, including one who got beheaded.

There were attempts to storm buildings in Almaty during the night and "dozens of attackers were liquidated," police spokeswoman Saltanat Azirbek said. She spoke on state news channel Khabar-24. The reported attempts to storm the buildings came after widespread unrest in the city on Wednesday, including seizure of the mayor's building, which was set on fire.

The initial reaction was in keeping with usual policy in the face of public discontent. Police and the National Guard were deployed in large numbers. The crowd that made its way to City Hall in the commercial capital, Almaty, early Wednesday was met by large phalanxes of riot police and armored personnel carriers. While gatherings are normally dispersed with ease, the number of people on the street this time was too large.

With government buildings coming under assault in several large cities, Tokayev appealed for help from the Collective Security Treaty Organization, a Moscow-led military alliance. He justified the appeal for external intervention by claiming the protesters were operating at the behest of international terrorist groups. He offered no details on what he meant by that.

Is the government likely to be toppled?

This is uncharted territory for Kazakhstan. The country has seen major demonstrations before: In 2016, after the passage of a contentious land law. And again in 2019, after the contentious election that secured Tokayev's hold on power. But never anything on this scale.

In one of his appeals to the public Wednesday, Tokayev pledged to pursue reforms and hinted that political liberalization might be possible. His darker remarks toward the end of the day, however, suggested he would instead go down a more repressive road.

Still, because the street protests are so lacking in focus, at least for now, it's difficult to see how they might end. But even if they fail to topple the government, it looks possible they might lead to deep transformation. What is not clear is what that might mean.

Hong Kong to kill 2,000 animals after hamsters get COVID-19

A team led by a retired FBI agent believes it has unraveled one of World War II's enduring mysteries -- how the Nazis found Frank's hiding place in August 1944 and sent her to die in a concentration camp.

Watch Now: Superyacht squeezes under bridge with less than 5 inches of clearance

See how the 262-foot MY Galactica yacht was transported from its shed in Oss, Netherlands, to the North Sea in this nail-biter of a video.

This is the pulse-pounding moment a young giraffe chased a vehicle full of safari enthusiasts in a nature reserve in South Africa.

When the snow begins to fall on Jabal al-Lawx (Almond Mountain) in Tabuk, Saudi Arabia, people set up tents and picnics to experience the cold weather.

'A cockroach moving in my head': Insect removed from man's ear after 3 days

The man had taken a dip at his local pool in New Zealand when, unbeknownst to him, the creature had crept inside his ear.

Royals on the witness stand

Prince Andrew's involvement with Jeffrey Epstein has been a cause of great controversy and scandal for the royal family. If the case between the prince and Virginia Giuffre goes to court, it certainly won't be the first time a royal has been called to testify. Richard Fitzwilliams, a royal commentator, talks about the current state of the royal family, while historian, Catharine Arnold, shares the scandalous story of Prince Andrew's great, great grandfather Edward VII (Bertie) and his tribulations in court. Can we take lessons for today from this historical royal scandal?

Pope Francis: Opting for pets over children is selfish

Pope Francis criticized couples who choose to have pets instead of children, arguing their decision to forgo parenthood leads to a loss of "humanity." 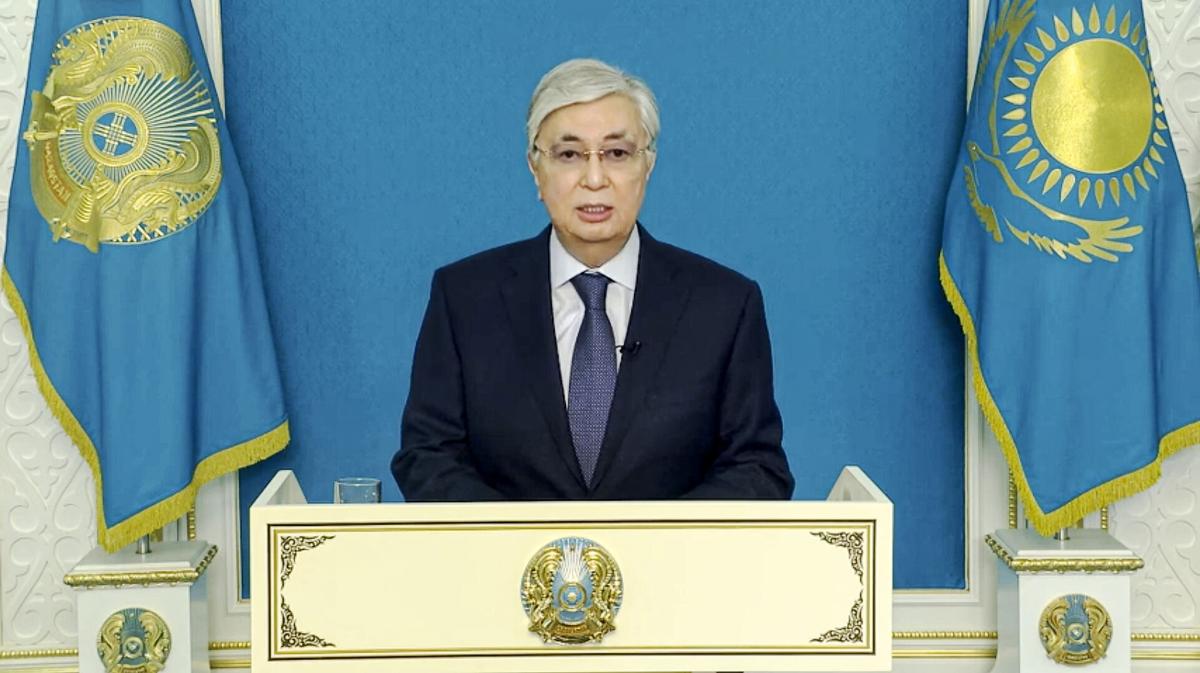 In this handout photo taken from video released by Kazakhstan's Presidential Press Service, Kazakhstan's President Kassym-Jomart Tokayev speaks during his televised statement to the nation in Nur-Sultan, Kazakhstan, Wednesday, Jan. 5, 2022. Tokayev said that "we intend to act with maximum severity regarding law-breakers." In the statement, he also promised to make political reforms and announced that he was assuming the leadership of the national security council. The latter is potentially significant because the council had been headed by Nursultan Nazarbayev, who was president from 1991 until he resigned in 2019. (Kazakhstan's Presidential Press Service via AP)

Smoke rises from the city hall building during a protest in Almaty, Kazakhstan, Wednesday, Jan. 5, 2022. News outlets in Kazakhstan are reporting that demonstrators protesting rising fuel prices broke into the mayor's office in the country's largest city and flames were seen coming from inside. Kazakh news site Zakon said many of the demonstrators who converged on the building in Almaty on Wednesday carried clubs and shields.

A demonstrator carries a police shield in front of police line during a protest in Almaty, Kazakhstan, Wednesday, Jan. 5, 2022. Demonstrators protesting rising fuel prices broke into the mayor's office in Kazakhstan's largest city Wednesday and flames were seen coming from inside, according to local news reports. Many of the demonstrators who converged on the building in Almaty carried clubs and shields, the Kazakh news site Zakon said.