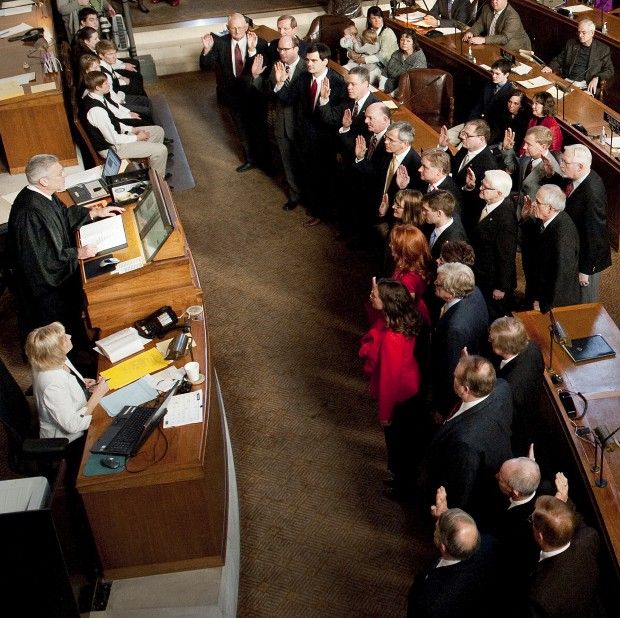 Nebraska Supreme Court Justice Michael G. Heavican administers the oath of office to the 24 newly elected to a first term or re-elected to a second term members of the Nebraska state legislature on Wednesday, January 5, 2011. (FRANCIS GARDLER / Lincoln Journal Star) 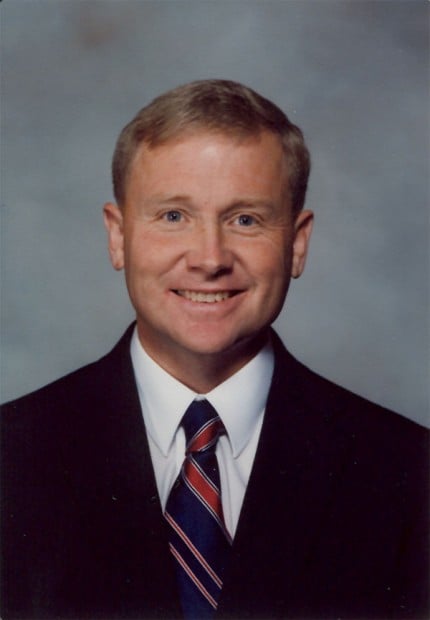 On the heels of the fatal shooting of an Omaha-area school administrator by a despondent student, Sen. Mark Christensen of Imperial introduced a bill Tuesday to allow teachers, administrators and school security guards to carry concealed guns.

The bill (LB516) would allow local school boards to choose by a two-thirds vote whether to allow such weapons on their property. The bill also applies to colleges and universities.

Christensen said he introduced his bill in response to the Jan. 5 shooting at Millard South High School, where 17-year-old student Robert Butler Jr. shot Assistant Principal Vicki Kaspar and then shot Principal Curtis Case. Kaspar had suspended Butler from the school earlier that morning. She died of her injury; Curtis has been released from the hospital.

Police found Butler about 45 minutes after the shooting in a parking lot about a mile from the school, dead from a self-inflicted gunshot.

"Do we want a situation where somebody can just walk in and start shooting teachers and all kinds of kids?" Christensen asked.

His measure, had it been on the books, might have allowed someone to stop Butler, he said.

"We might have been better off,'' Christensen said. "To me, it's much better to be able to deal with the situation quickly. We can stop additional lives from being taken."

Nebraska now allows people who are licensed to do so to carry concealed weapons, but the weapons are restricted in many places, including schools. Christensen said he wants local schools to be able to change that.

"Criminals do not follow the rules," he said. "It's not the gun that kills anybody. You can leave a loaded gun cocked on a table all day and it's not going to fire. It takes a human."

Brian Hale, director of communications for the Nebraska Association of School Boards, said there is talk nationwide about implementing tighter security at school board meetings after a recent shooting at a meeting in Florida.

In that case, 56-year-old Clay Duke, apparently angered that his wife had lost her teaching job, began firing a handgun at Bay City Schools Superintendent Bill Husfelt at a school board meeting. Nobody was hit before Duke, after exchanging shots with a security guard, fatally shot himself.

"The security of our school buildings ... will continue to be a priority for school officials, but we hope those security concerns can be addressed through strategies other than those proposed in LB516,'' he said.

Melissa Lee, communications manager for the University of Nebraska, said NU officials had not yet reviewed the bill.

"However, in the past, we have supported legislation to restrict guns and other weapons on our campuses," she said.

Arizona lawmakers are considering legislation that would allow college faculty members to carry concealed weapons on campus. Another measure would prevent schools from stopping a person with a permit from carrying a weapon.

One of the most horrific school shootings in U.S. history came in 1999, when two students, Eric Harris and Dylan Klebold, killed 12 classmates and a teacher at Columbine High School in Colorado before killing themselves.

Another came in 2007, when Virginia Tech student Cho Seung-Hui went on a rampage on campus that left 33 people dead, including Cho, who killed himself.

Olympians past & present reflect on Tokyo 2021

The Session: A Legislature blog

A Millard South High School senior's decision to shoot two administrators at his school Wednesday, killing one of them, before killing himself…

Police: Millard gunman was handed suspension on day of shooting

In a 40-minute window Wednesday morning, Robert Butler Jr. gained access to a handgun that is believed to be his father's service weapon, broke into a locked garage and drove to Millard South High School in the red Honda Accord that got him suspended earlier that day.

Nebraska Supreme Court Justice Michael G. Heavican administers the oath of office to the 24 newly elected to a first term or re-elected to a second term members of the Nebraska state legislature on Wednesday, January 5, 2011. (FRANCIS GARDLER / Lincoln Journal Star)