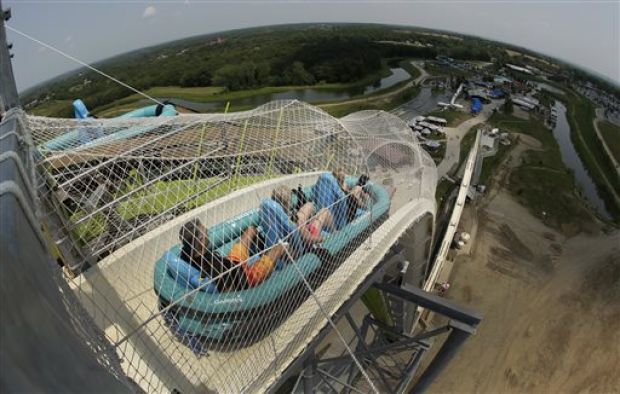 In this photo taken with the fisheye lens, riders go down the world's tallest water slide called "Verruckt" at Schlitterbahn Waterpark, Wednesday, July 9, 2014, in Kansas City, Kan. The 168-foot-tall waterslide is scheduled to open to the public Thursday, after initially being slated to open May 23. 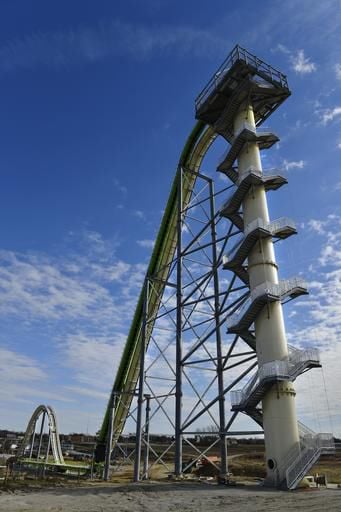 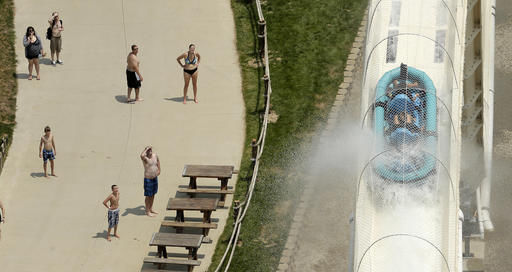 Riders are propelled by jets of water as they go over a hump while riding a water slide called "Verruckt" at Schlitterbahn Waterpark in Kansas City, Kan.

KANSAS CITY, Kan. — Two Kansas water park workers were acquitted Thursday of impeding an investigation into the death of a 10-year-old boy who was decapitated while riding what was billed as the world's tallest waterslide in 2016.

David Hughes and John Zalsman were found not guilty of obstruction of justice in connection to the death of Caleb Schwab, the son of a Kansas legislator. The boy was killed while riding the 17-story Verruckt waterslide at the Schlitterbahn water park in Kansas City.

Hughes and Zalsman, both maintenance workers, were the first employees to stand trial in the case. Others have also been charged, including one of Schlitterbahn's owners and the designer of the slide, who have both pleaded not guilty to second-degree murder.

The since-closed ride used rafts that made the 17-story drop at speeds of up to 70 mph, followed by a surge over the hump and a 50-foot descent to a finishing pool. Caleb was in a raft that went airborne and slammed him into a metal pole that supported a net meant to keep riders from flying off the slide. Two women on the raft also were injured.

Prosecutors alleged that Hughes and Zalsman failed to replace a brake mat that fell off the slide two weeks earlier but told investigators that the mat had only been on the slide during testing phases. Video evidence showed that the mat was used after the ride opened to customers in 2014, prosecutors said.

"This was not a mistake, this was intentional calculated conduct," said Adam Zentner, assistant Kansas Attorney General.

The defense said prosecutors didn't understand how the slide functioned and questioned the testimony of Jason Diaz, the Kansas Bureau of Investigation agent who interviewed the defendants. The defense also noted that another Schlitterbahn employee who made false statements to investigators wasn't charged.

"These are just two good old boys, they're hard-working guys and because they're the only two adults in the room they get singled out and have to get charged ," said Scott Toth, defense attorney for Hughes, as he addressed jurors.

Diaz said he didn't believe the other employee had intentionally misled him. Schlitterbahn has said officials had no reason to believe any employee obstructed justice.

"We have maintained our belief in the integrity of our staff and respect the process and decision by the jury," Schlitterbahn spokeswoman Winter Prosapio said in an email after the verdict.

The most serious charges in Caleb's death have been filed against one of Schlitterbahn's owners, Jeff Henry, Verruckt designer John Schooley and general contractor Henry & Sons Constructions. Each is charged with second-degree murder, which carries up to 41 years in prison; aggravated battery; and aggravated endangerment of a child. Another employee is charged with involuntary manslaughter.

They have all pleaded not guilty. Their trials have not yet been scheduled.

The slide was shut down after Caleb was killed.

The boy's father, state Rep. Scott Schwab, a Republican from the Kansas City suburb of Olathe, had no immediate comment after being informed of the verdict Thursday.

His son's death prompted Kansas legislators to strengthen the state's relatively lax oversight of amusement park rides. Their 2017 law required amusement park rides to be inspected every year by qualified inspector after previously allowing the parks to do their own. The law also mandated that parks report injuries to the state.

But lawmakers quickly delayed criminal penalties for violations and then this year loosened rules further for county fairs and other short-term, one-location events run by nonprofit groups. They also exempted attractions such as hay-rack rides.

The Schwab family will receive nearly $20 million in payments from legal settlements from companies associated with Schlitterbahn, the general contractor, the raft manufacturer and a company that consulted on the waterslide.

The elder Schwab is the Republican nominee for Kansas secretary of state.

KANSAS CITY, Kan. — A Kansas judge says crews can begin tearing down a 17-story waterslide on which a 10-year-old boy was decapitated when his…

TOPEKA, Kan. — The operator of a Kansas water park where a boy was killed on a giant water slide in 2016 says the park won't open for the seas…

TOPEKA, Kan. — A water park company co-owner accused of rushing the world's tallest waterslide into service and a designer accused of shoddy p…

KANSAS CITY, Mo. — The family of the 10-year-old Kansas boy killed last summer at Schlitterbahn water park has reached a civil settlement with…

World's tallest waterslide in K.C. to be demolished after boy died

KANSAS CITY, Mo. — A 168-foot-tall Kansas waterslide on which a state lawmaker's 10-year-old son was killed last summer will be demolished onc…

POTTER — The cook who mixed kangaroo meat into the chili he made for students at a Nebraska school has lost his job.

Demolition begins of Kansas waterslide on which boy died

KANSAS CITY, Kan. — Crews are tearing down a giant waterslide that a 10-year-old Kansas boy was riding when he was decapitated two years ago.

AUSTIN, Texas — A Texas-based water park company has sold two of its attractions and given the buyer the right to acquire its Kansas site wher…

Oceans of Fun in Kansas City, Missouri, plans to build Riptide Raceway, the longest mat racing slide in the Midwest. It will debut next summer.

In this photo taken with the fisheye lens, riders go down the world's tallest water slide called "Verruckt" at Schlitterbahn Waterpark, Wednesday, July 9, 2014, in Kansas City, Kan. The 168-foot-tall waterslide is scheduled to open to the public Thursday, after initially being slated to open May 23.

Riders are propelled by jets of water as they go over a hump while riding a water slide called "Verruckt" at Schlitterbahn Waterpark in Kansas City, Kan. 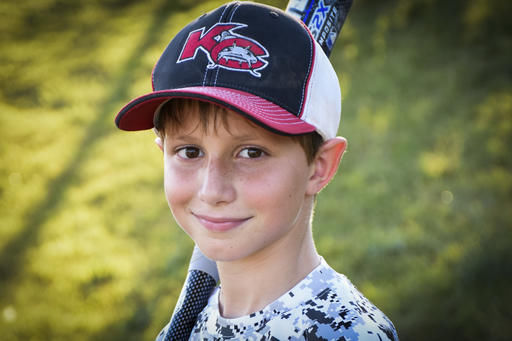