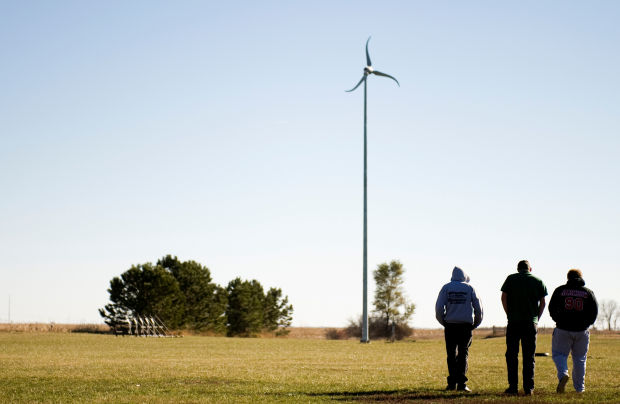 Meridian Public School students Liam Noel (from left), Brandon Owndholn and Caleb Jarchow walk toward their wind turbine during Basic Electronics class as part of the Winds for Schools Program on Nov. 12, 2013. 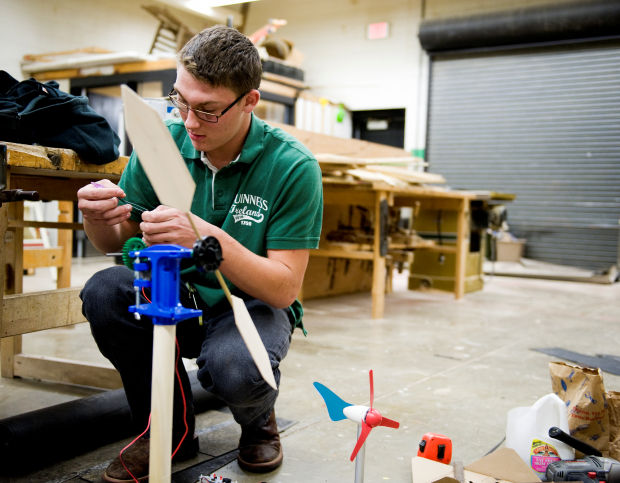 Brandon Owndholn puts together a wind turbine during Basic Electronics class as part of the Winds For Schools Program on Nov. 12, 2013, at Meridian Public School.

Six years ago, a person could count the number of wind turbines and wind farms in Nebraska on one hand.

While Nebraska struggled to catch up, the U.S. Department of Energy launched its Wind for Schools program with the idea of helping states develop a skilled workforce for the nascent wind industry.

"The DOE wanted to be sure there would be engineers and other technical expertise to grow the industry," said Dan McGuire, who runs the project in Nebraska.

The idea was simple: Help schools across the country, especially in rural areas, put up small wind turbines to give students and teachers hands-on experience with the technology.

The DOE stopped funding the Wind for Schools program Oct. 1, and operation and maintenance of the more than 135 wind turbines that have been installed in 11 states will fall to schools, which plan to use the turbines as part of their curricula.

"These states had a lot of wind energy potential but not enough was developed," McGuire said.

In Nebraska, schools had to contribute $1,500 to help pay for their Skystream 3.7 turbines.

"It was never intended to be a major electricity source for schools," McGuire said. "Larger machines would have been too expensive. These needed to be affordable for rural schools."

The program called for school boards or individuals to champion individual projects, and grants were available from the U.S. Department of Agriculture and Nebraska Public Power District. Local contractors and companies sometimes provided services at reduced rates.

In Nebraska, wind turbines have been installed at 25 K-12 schools, four community colleges and the Wind Applications Center at the University of Nebraska-Lincoln.

"Nebraska still leads the country with the largest number of K-12 partner schools," McGuire said. "Kansas and Colorado are close, with around 20 each."

The Wind Applications Center, which was created at the same time Wind for Schools was launched in Nebraska, has been critical to the success of the program, McGuire said, providing resources and personnel to help schools install their turbines.

Under the direction of University of Nebraska-Lincoln Professor Jerry Hudgins, the center provided undergraduate and graduate students to help schools with permits, foundation issues and working with utilities on electrical connections.

The center also developed a free curriculum for schools to use and taught wind energy courses through the University of Nebraska-Lincoln's Electrical Engineering Department.

"We impacted a lot of folks across the state," Hudgins said.

More than 200 university students took wind energy courses at UNL, and many of them went on to successful careers, he said.

Hundreds of high school students also were exposed to wind energy topics in class and in a summer program run by UNL, McGuire said.

Even though funding has ended, Terry Smith, an industrial technology teacher at Meridian Public Schools near Daykin in Jefferson County, is excited about the Wind for Schools program and its potential. The school district installed its wind turbine last year.

In August, Smith attended a KidWind Project workshop in Portland, Ore., which trains teachers how to teach their students about wind energy. Since the installation, high school students have been experimenting with blade and tower sizes and exploring the potential for using wind energy.

"We do a lot of hands-on stuff — a lot of problem solving," Smith said. "The kids love to see how fast the blades can go."

Smith also talks to students about potential careers and the environmental effects of wind farms on birds, bats and other wildlife. He said the KidWind Project has been a great resource, providing $2,000 worth of classroom materials.

Plans in Nebraska include expanding the curriculum to elementary school students next spring and hosting workshops for adults and other area schools.

Meridian Public School students Liam Noel (from left), Brandon Owndholn and Caleb Jarchow walk toward their wind turbine during Basic Electronics class as part of the Winds for Schools Program on Nov. 12, 2013.

Brandon Owndholn puts together a wind turbine during Basic Electronics class as part of the Winds For Schools Program on Nov. 12, 2013, at Meridian Public School.