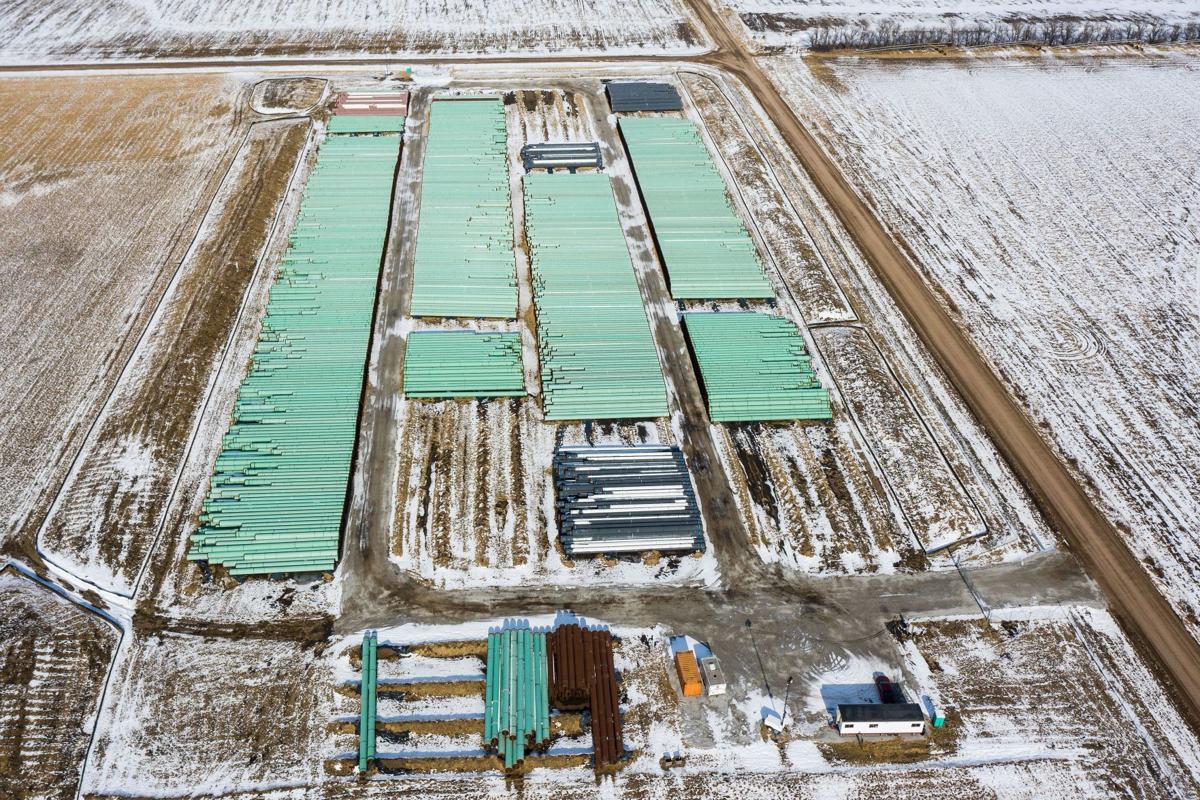 Pipes to be used for the Keystone XL pipeline are stored in a field near Dorchester. 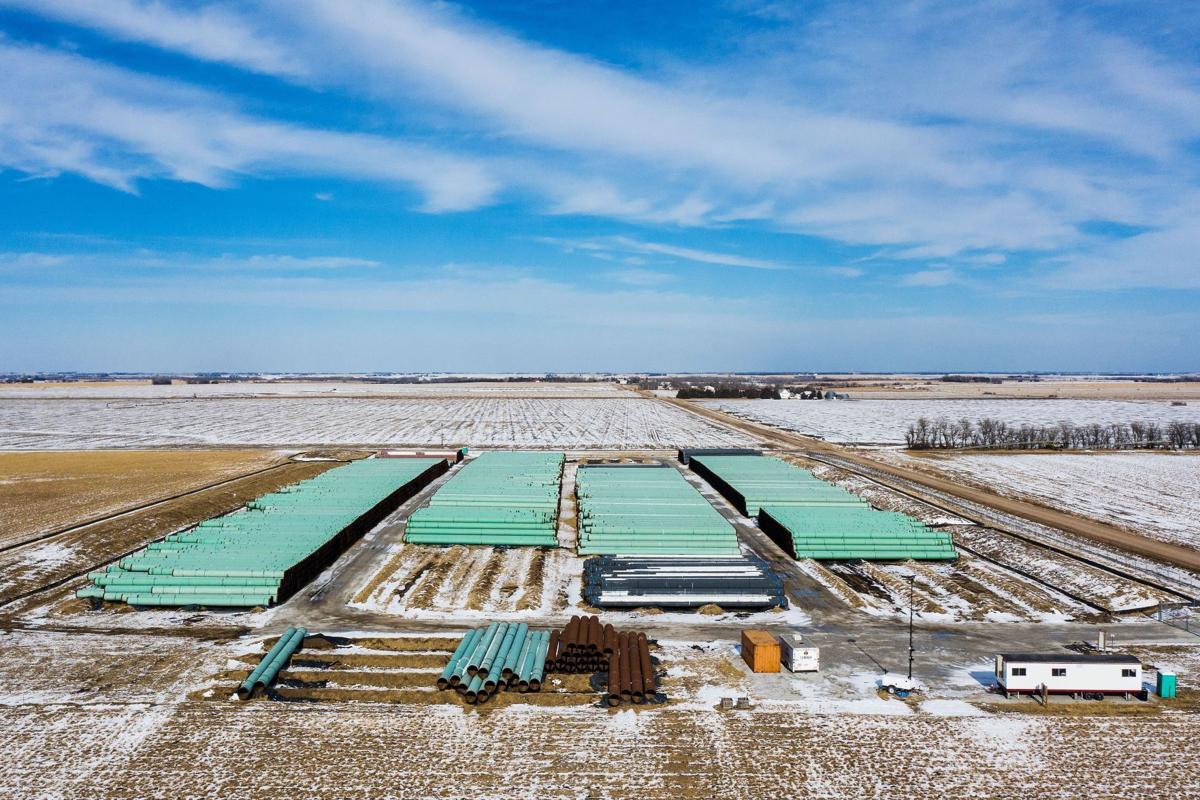 Pipes meant for the Keystone XL pipeline are stored in a field near Dorchester. President Joe Biden on Wednesday nixed the controversial project.

Pipes to be used for the Keystone XL pipeline are stored at a field near Dorchester. Wednesday, President Biden nixed the controversial project that was first proposed in 2008.

Opponents of the Keystone XL pipeline expressed joy over the action by President Joe Biden on Wednesday to revoke approval of the controversial oil pipeline set to flow through Nebraska.

Even though it took 10 years with “lots of tears and setbacks,” she acknowledged.

Kleeb, the Hastings activist who led the way and now is the state's Democratic chairwoman, said victory was finally achieved over the opposition of “the Republican Party, Big Oil and half the Democratic Party.”

There are “lots of lessons” from that, she said, not only about perseverance, but also the strength of “friendships and unlikely relations,” combined with “tears and setbacks” along the way.

“Thank you President Biden and all the thousands of voices who have stood strong these many years,” said Jeanne Crumly, an O’Neill-area rancher whose land was in the path of the pipeline.

But another leading opponent expressed worries that the project, which had been blocked by President Barack Obama then resurrected by President Donald Trump, wasn’t killed forever.

“We have been down this road once before only to have our hopes and expectations crushed with the election of a Republican president,” said Randy Thompson, who became the visible face of the opposition. “As long as this project remains a political football, I will never feel secure in our victory.”

“Failure to construct the pipeline would mean more dependence on overseas energy sources as well as fewer jobs and less property tax relief for Nebraskans," he said in a statement Wednesday evening. "This is a project that would greatly benefit not just Nebraska but also our whole country, and it is our hope that TC Energy presses forward.”

The presidential permit for the pipeline, proposed more than a decade ago, had allowed the pipeline to cross into the United States.

TC Energy had announced a suspension of work on the project earlier Wednesday, even before Biden had, as expected, taken action.

The energy company said it will review the decision, assess its implications and consider its options. "However, as a result of the expected revocation of the presidential permit, advancement of the project will be suspended."

Canceling the permit was among Biden's first executive actions in office.

After earlier reports surfaced that it would be canceled, TC Energy announced late Sunday it would spend $1.7 billion on a solar, wind and battery-powered operating system for the pipeline to ensure it is zero-emission by 2030, and to rely exclusively on union labor.

The pipeline would carry roughly 800,000 barrels of oil a day from Alberta to the Texas Gulf Coast, passing through Montana, South Dakota and Nebraska.

First proposed in 2008, the pipeline has become emblematic of the tensions between economic development and curbing the fossil fuel emissions that are causing climate change. The Obama administration rejected it, but President Trump revived it and has been a strong supporter. Construction has already started.

For a decade, legal and legislative issues have held up the pipeline in Nebraska, although the state's Supreme Court ruled last year in favor of the route through the state that the Public Service Commission approved.

Kirsten Hillman, Canada’s ambassador to the United States, said Canada needs to move on now that Biden has made a decision.

“Of course we’re disappointed. We worked hard over the past number of months trying to make the case for Keystone XL," Hillman told the Canadian Broadcasting Corp.

“He (Biden) had made a commitment during his campaign and he lived up to that commitment. I think we have to accept that and move forward.”

Sheriff 'confident America will rise above all the difficulties'

Lancaster County Sheriff Terry Wagner, a Republican who has served in his elected office for 25 years, said: "Well, I mean, it is what it is. He (President Joe Biden) wasn't my preferred candidate."

The overall index of the Rural Mainstreet Survey improved to 52 in January from December’s 51.6 — the highest reading since before the onset last year of the coronavirus pandemic.

How long will the honeymoon last?

Ruling says lawsuit against MUD in Omaha fire can continue

The lawsuit stemmed from an explosion and fire sparked Jan. 9, 2016, when construction workers struck a natural gas line in front M’s Pub restaurant in the Old Market.

A climate-focused working group has keyed in on a series of achievable, practical and meaningful early goals to propel Lincoln's overall effort to slow climate change and prepare for its effects, mayoral adviser Miki Esposito said.

From COVID to immigration to climate change, Biden could affect Nebraska in many ways

As President Biden starts work on the nation's many challenges, his aggressive agenda has the potential to reshape life in Nebraska and across America.

The Public Service Commission and Black Hills agreed on a rate increase that's $6.6 million less than what was originally proposed.

Nebraska was ground zero for the battle against the Keystone Pipeline, and Jane Kleeb led the way over a 10-year span.

Nebraska Gov. Pete Ricketts, a pipeline supporter, cheered the lawsuit in a post Thursday on Twitter: "We want these great jobs and the property tax revenue the project would bring to our rural communities!"

Though the pipeline was to run through three states, it was environmentalists in Nebraska who were often leading the challenge.

TC Energy announced its Keystone XL pipeline is no more, but opponents say the war will continue on at least three battlefields: the Nebraska Public Service Commission, courts and state Legislature.

Pipes to be used for the Keystone XL pipeline are stored in a field near Dorchester.

Pipes meant for the Keystone XL pipeline are stored in a field near Dorchester. President Joe Biden on Wednesday nixed the controversial project.

Pipes to be used for the Keystone XL pipeline are stored at a field near Dorchester. Wednesday, President Biden nixed the controversial project that was first proposed in 2008.