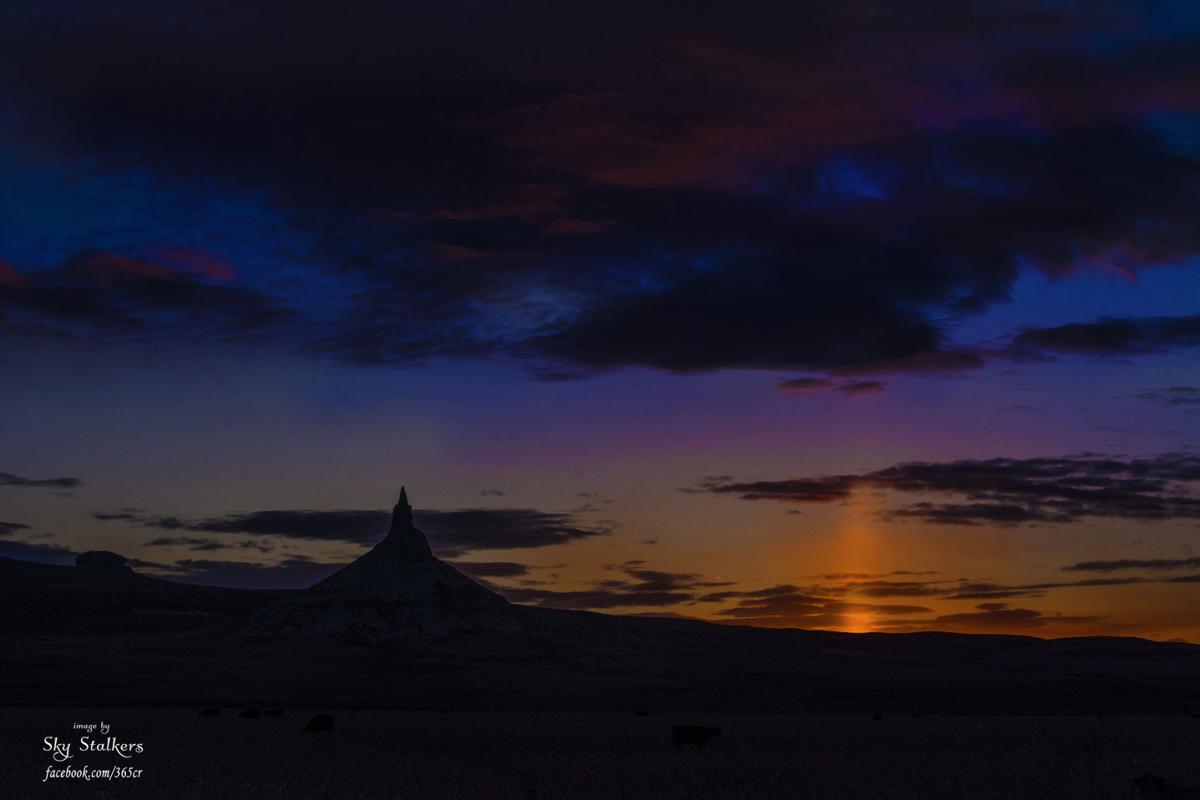 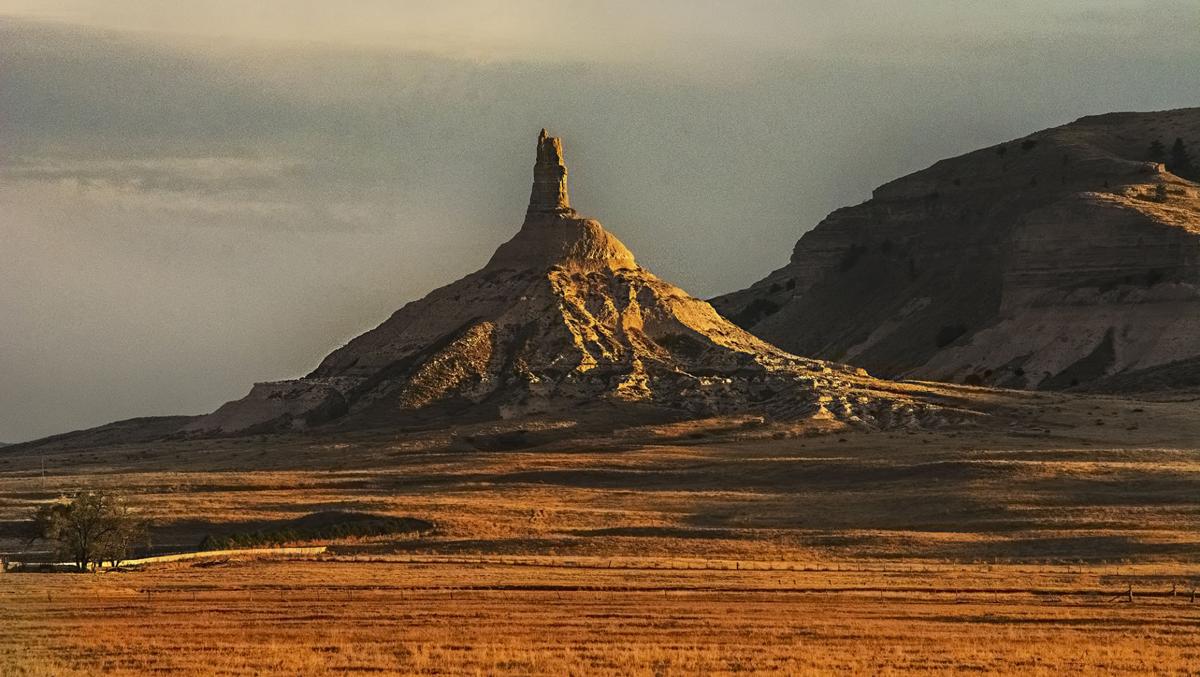 Photographer Sharon Henderson said she's become attached to Chimney Rock, where she has captured a year's worth of sunsets. 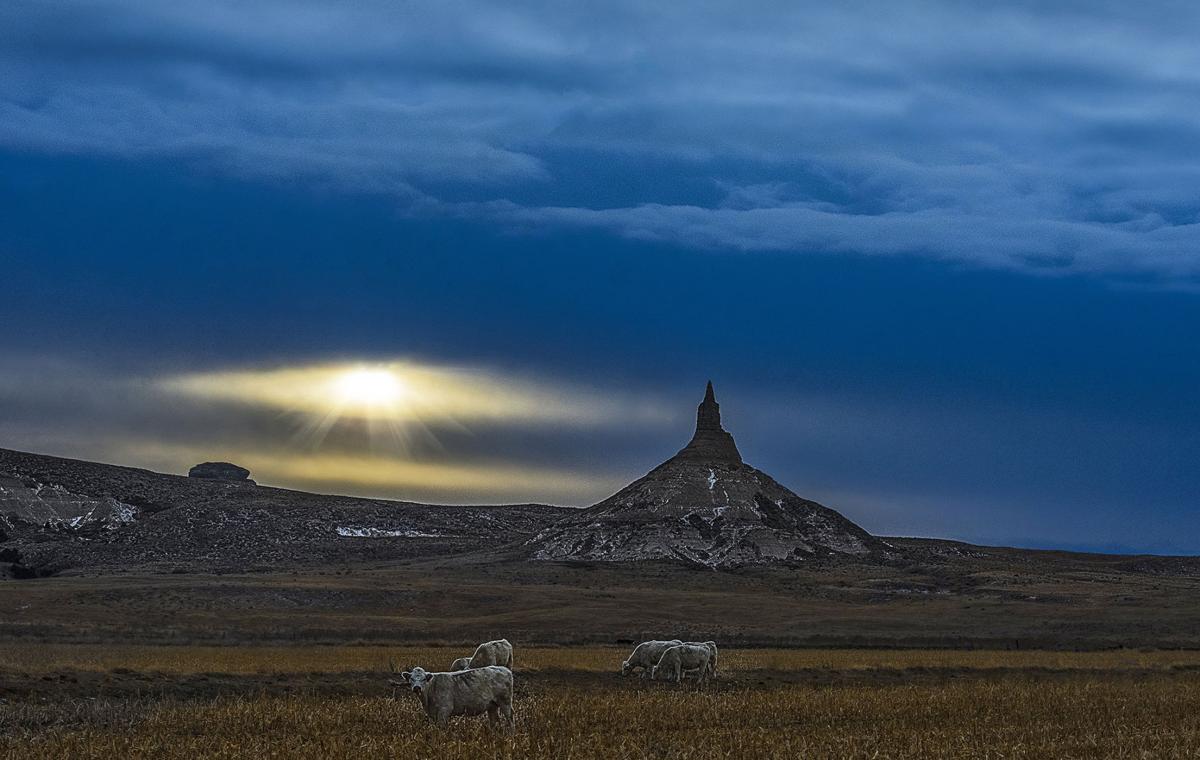 Sharon Henderson of Sagebrush Junction Photography and a friend committed to photographing Chimney Rock every day during 2016. 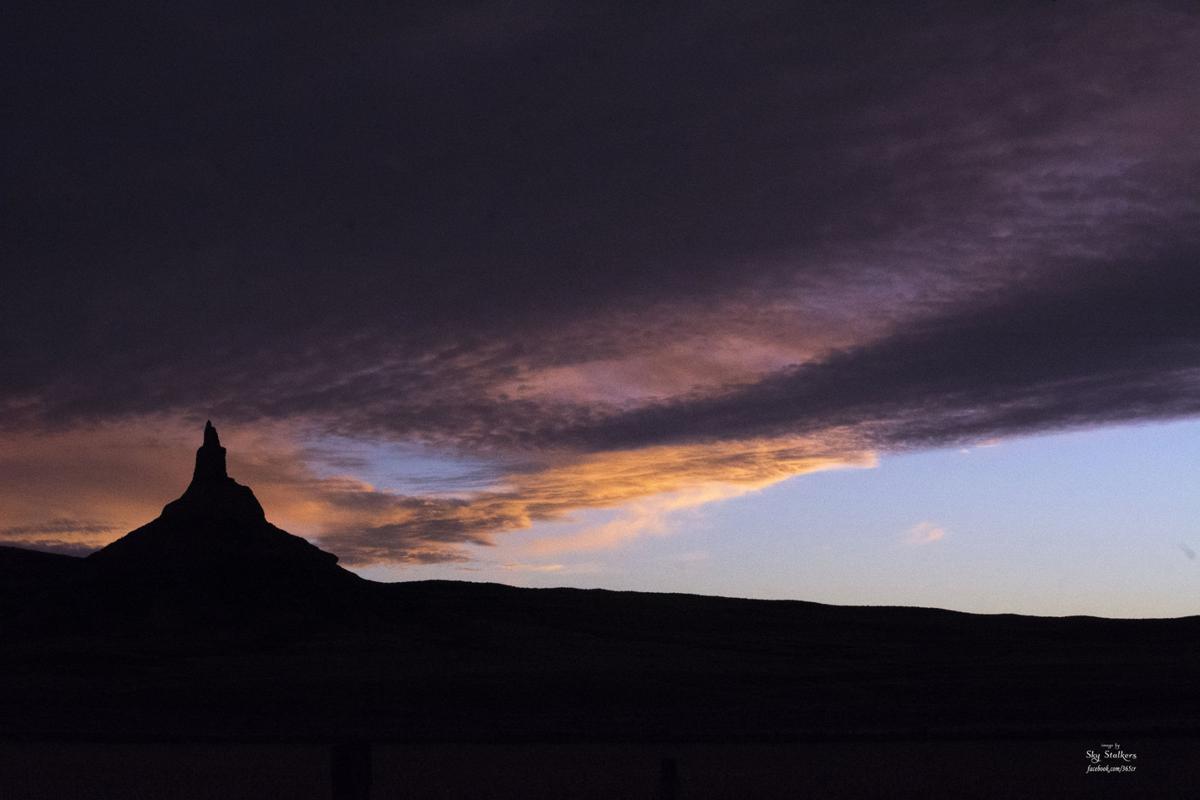 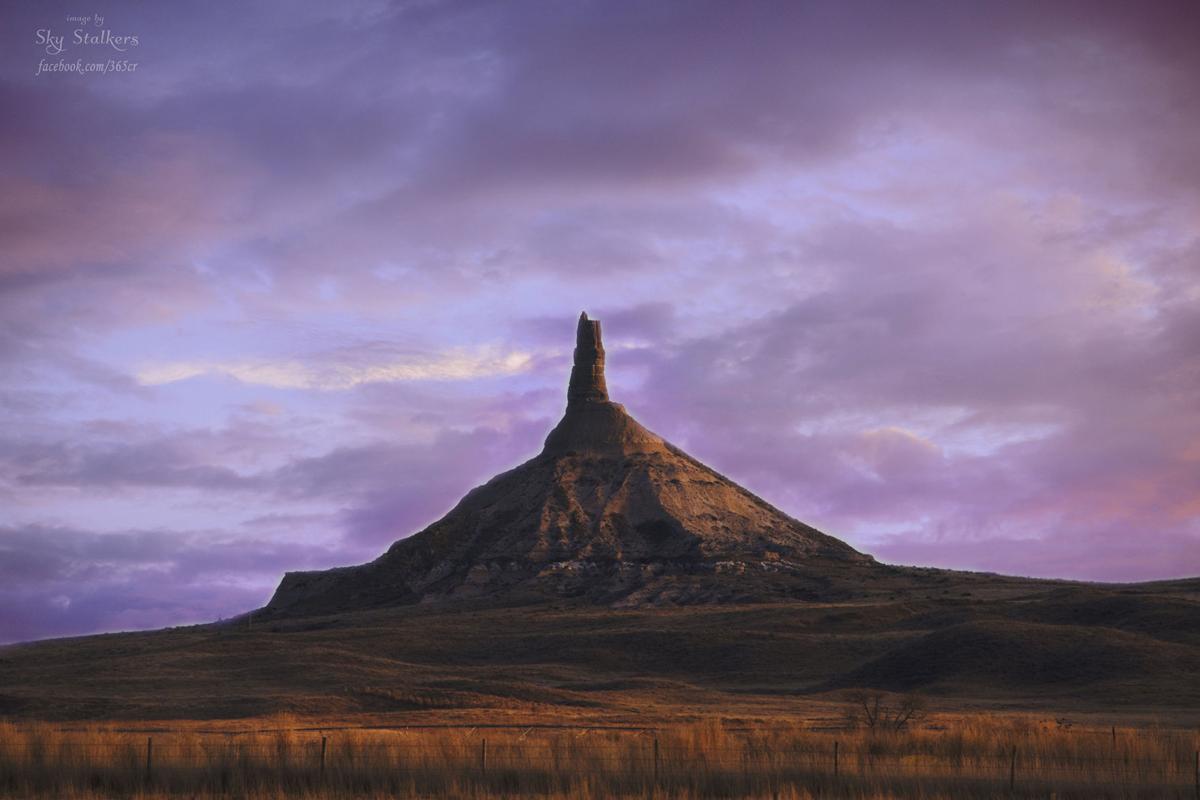 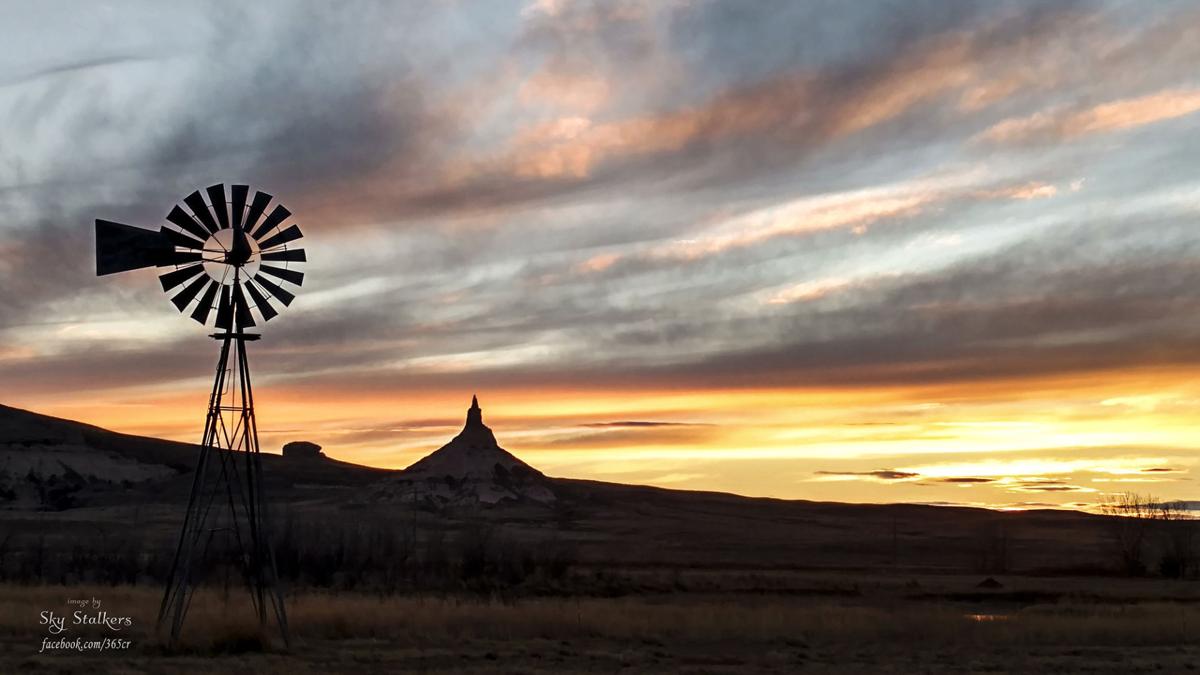 She didn’t expect Chimney Rock to teach her so much.

She didn’t expect to become so connected to the 325-foot landmark, almost possessive of it, that she’d bristle slightly when she saw others taking its photo, too.

Or that she’d be this sad that the project to photograph the monument every day during 2016 is over in a few days.

The Panhandle photographer and a friend, Rod Russell, really didn't know what to expect when they decided to capture a year's worth of sunsets at Chimney Rock, a milepost for pioneers who had traveled the Oregon, Mormon and California trails.

They planned to take turns traveling to the tower, and to post new photos on a Facebook page and, when the year was over, publish a book.

Not all of their plans held up. Though it was a 40-mile round trip for each of them, they often double-teamed the sunset, staking out the spire from different directions. They had to suspend the book idea when it became clear it would be too costly. So they’re selling calendars instead, each month a different picture of Chimney Rock.

But their Facebook page, CR365, became a popular place. Nearly 4,000 people follow it, and some shots of the rock get hundreds of likes. “There are a lot of people that love Chimney Rock,” she said. “I think it reminds so many people of home, if they don’t live here anymore.”

On good nights, when the clouds danced with the light, they would take up to 400 photos. Even on stagnant nights, they would still shoot dozens. Then they would edit them down and post the best six or so.

“It taught me a lot about a lot of things,” Henderson said. “It taught me about seeing a very long project through from beginning to end, it taught me that it’s not always an easy thing to do but it can be done.”

It taught her the light surrounding Chimney Rock is never the same, the color combinations changing from moment to moment. Even though they took thousands of photos -- her cameras took a beating in the last year, she said -- they never took the same picture twice.

And that taught them both to be better photographers, she said.

They watched the land around the monument change, too. They started in winter and will end in winter, but in the months in between, the land was plowed, planted and harvested. Wheat and corn and sunflowers and hay.

“We let the different seasons play with the way we framed the photos,” Henderson said.

And the commitment they made taught her something about time. About how fast it can fly. She was surprised to realize they were 100 days in, then 200, then 300.

“I don’t think it made time go faster, but it made me aware of how fast it goes. If I had hated the project, it probably would have dragged out.”

There were only a couple of nights in the past 12 months when she felt she was weighing her options: Take a trip out of town, for instance, or go shoot Chimney Rock.

The photographer's not sure what she’ll do Jan. 1. She might make the 21-mile drive to Chimney Rock out of habit. But she's also planning a new project for 2017 -- photographing a year’s worth of sunsets at Scotts Bluff National Monument.

A year's worth of sunsets

* To see photos from the past year, visit the project's Facebook page: CR365.

* To order a calendar, visit: gallery.sagebrushjunctionphoto.com/chimneyrockcalendar.

Chimney Rock hasn't changed in six months, but so much else has.

The pair of Panhandle photographers have staked out Chimney Rock every evening so far this year, ready for the sun to start setting on the nat…

A Christmas Eve fire has destroyed an auto shop in Howells.

For his latest retirement, the 30-year-old planned 413 walks in the park.

GENEVA -- He had the car of his dreams, a $500 Jeep that had been rotting and rusting in a Hamilton County weed patch for so long he could sav…

The name of Sunday's gathering -- Writers Resist -- only sounds negative.

Dozen nominees have shot at Nebraska Hall of Fame

A skywriter, a chemist and a conductor of the Underground Railroad walk into a meeting.

It took months to negotiate, but the Nebraska State Historical Society Foundation has sewn up a deal to buy 360 acres of former pioneer stompi…

Sharon Henderson has been taking photos of Chimney Rock for a long time. In 2016, she and another area photographer set out to take pictures o…

Another year, another 365 photos of Chimney Rock

Sharon Henderson spent a full year in the orbit of Chimney Rock, circling its base, reading the Panhandle sky, searching for the right moment …

For the price of a southeast Lincoln home, you can own a golf course — with view of Chimney Rock

The city of Bayard is selling its nine-hole golf course, with a view of Chimney Rock, for $400,000.

Photographer Sharon Henderson said she's become attached to Chimney Rock, where she has captured a year's worth of sunsets.

Sharon Henderson of Sagebrush Junction Photography and a friend committed to photographing Chimney Rock every day during 2016.