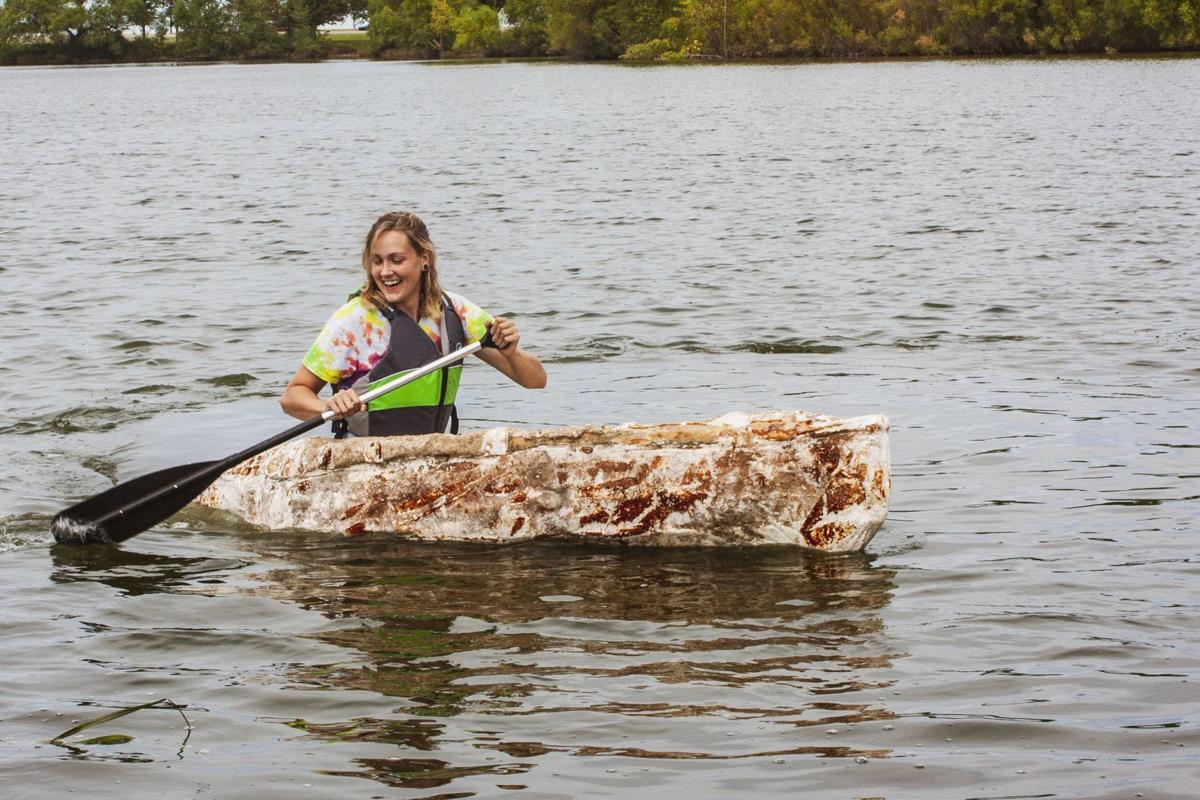 Katie Ayers, a Central Community College-Columbus student, paddles in the canoe she made using fungi. 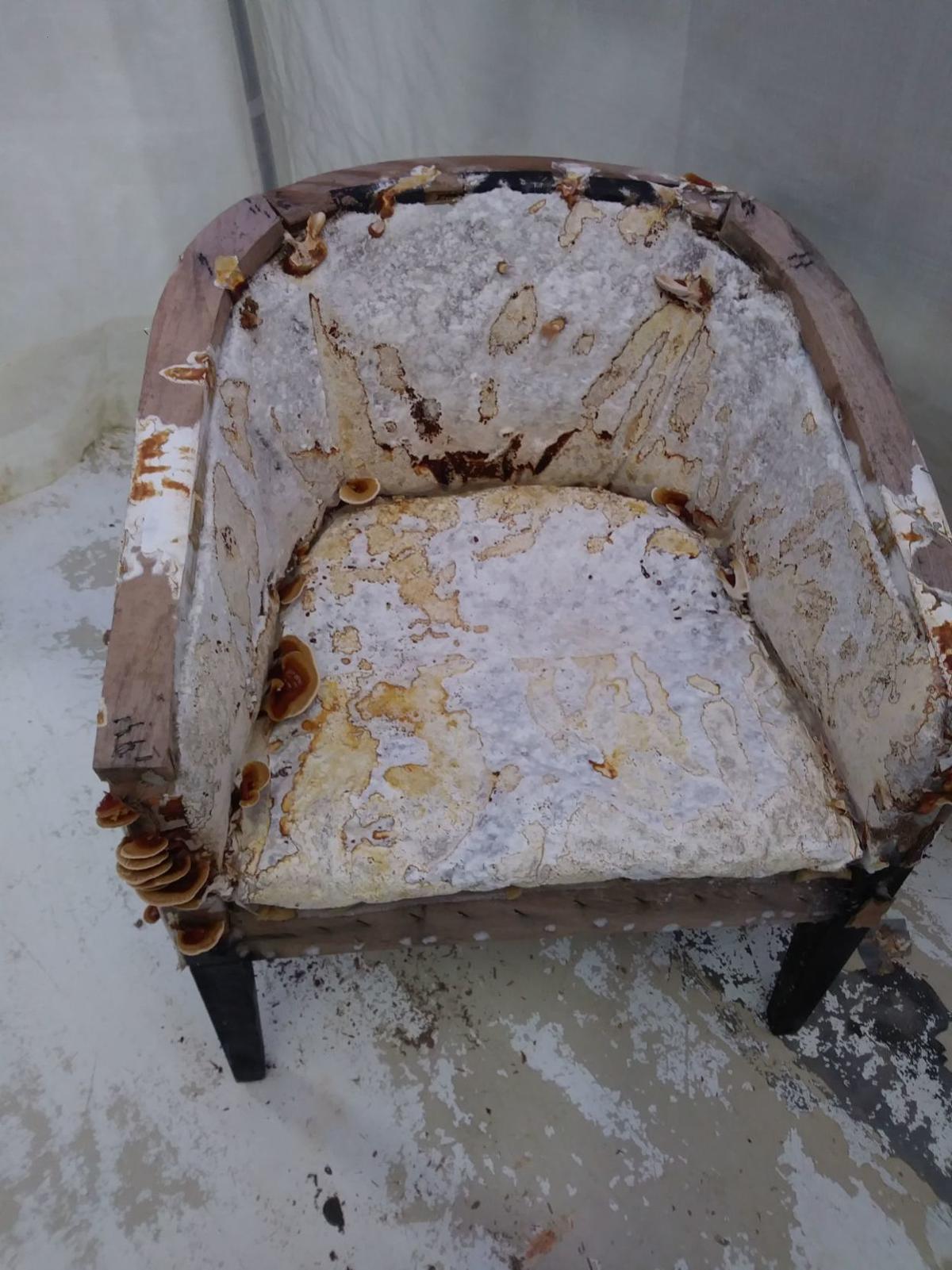 Pictured is a chair made out of fungi material by Central Community College-Columbus student and Columbus resident Katie Ayers. 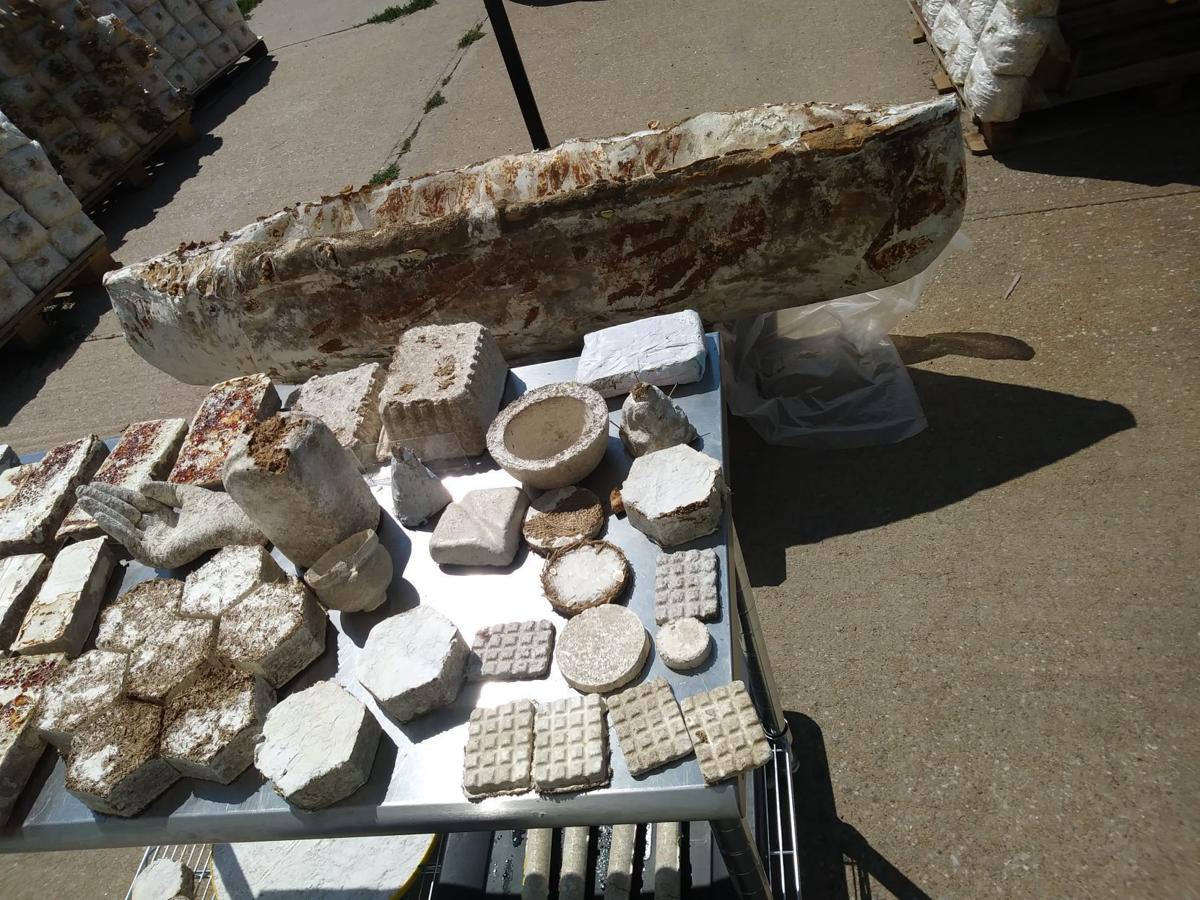 Katie Ayers, Columbus resident and Central Community College-Columbus student, has a passion for fungi. Pictured are the many items she created using fungi as building material.

COLUMBUS — Katie Ayers has a thing for fungus. Where some find it to be cringeworthy — think of a block of cheese left in the fridge for a year — she sees potential.

Through her passion for science, the Columbus resident and Central Community College-Columbus sophomore is using fungus to better the planet.

She's been using fungi as a building material. She’s constructed a chair, bowls, plates, a canoe and even a hand.

“It all started with a documentary and it never stopped,” Ayers said, noting that her fascination with the organism began about 2 years ago.

Ayers said fungus is an important partner in fostering agricultural growth because fungi take in the carbon that plants produce during photosynthesis and release nutrients back to the plant.

“Fungi are responsible for our fertile soil in Nebraska,” she said.

Ayers is probably most recognized for building a functioning canoe out of fungi. NBC News recently spotlighted that project on a national broadcast.

She spent three months drawing up blueprints for the canoe, which she calls myconoe — myc is derived from the Greek word mykes, which means fungus.

Ayers built it by constructing a wooden skeleton, then inserting mycelium, the main part of a fungus, along with a food source.

“Once we got it all in there, it only took one week to grow,” Ayers said.

She's used the vessel three times and plans to utilize it more often as the weather warms up.

As a student in Project GPS (Growing Pathways to STEM), Ayers is working on crafting a bee hotel out of fungi. Project GPS is a scholarship-awarding program sponsored by the National Science Foundation that targets high-achieving students with financial need and who represent underserved populations in the STEM fields.

Construction projects at NU moving ahead amid economic slowdown

Bees are responsible for pollinating up to 80% of flowering plants, and their future is bleak, Ayers said. But research indicates that fungi may help reduce the risk of viruses in bees. Therefore, a bee hotel made of fungi material may be beneficial, she explained.

The shell of the bee hotel has been created; the next step will be placing the nesting material.

She recently received a $3,000 Public Information and Education grant from the Nebraska Academy of Sciences. It is funded through the Nebraska Environmental Trust.

“The bee hotel project will be funded by that grant,” Ayers said.

“Katy is tenacious,” said Lauren Gillespie, a biology professor at CCC-Columbus who has worked closely with Ayers in Project GPS. “She has a thirst for knowledge that is a dream to have in a student.”

Ayers also has several mini-projects in the works, such as attempting to grow morel mushrooms. Currently, they cannot be grown commercially, so Ayers has been experimenting by adding hydrogen peroxide to the fungi to see if the fruiting body — which is involved with reproduction — will grow.

The Kearney native is a non-traditional student. She took an eight-year break between high school and college when her father became ill. He eventually died and Ayers decided to continue pursuing a career in science.

She initially wanted to be a nuclear engineer, then considered bio-engineering before discovering her passion in mycology, the study of fungi.

Gillespie said that Ayers can share scientific ideas in a way that can be easily understood and reach those who may not be knowledgeable in that field of study.

“She has that charisma and passion that can just draw you into it,” Gillespie said.

Ayers will graduate from CCC in spring 2021 with an associate’s degree. She wants to obtain a bachelor’s degree in mycology and eventually get a doctorate. Ayers will stay on at CCC an additional year to take more classes that will be transferable before choosing a four-year university.

In 10 years, Ayers said she hopes to be making a difference in the world by helping keep the environment clean. She noted one study in which researchers gauged how fungi could clean up a diesel oil spill. Oyster mushrooms were placed on the area; soon, plants were growing where the oil had been.

“I hope I am making products to reduce the amount of Styrofoam and plastics in the world,” she said.

Additionally, Ayers dreams of obtaining a superfund site and utilizing fungi to clean it.

She is an environmental sustainability intern at the CCC Columbus campus; recently, she’s been organizing presentations about how students can help the environment.

“This has been one of the weirdest journeys I’ve been on,” Ayers said. “Following some of my biggest dreams can actually pay off.

“It’s all about creativity and curiosity,” Ayers said. “If you can stay curious and stay creative, you can do anything.”

Into the unknown: Talking about social distancing to a toddler

Young kids may not be able to digest the ins and outs of flattening the curve or realize the severe blow the pandemic has dealt to the economy but they do know something has changed.

UNL administrator competes on 'The Price Is Right'

UNL vice chancellor of diversity and inclusion, Marco Barker, was recently a contestant on "The Price Is Right." The show will air on Tuesday.

Katie Ayers, a Central Community College-Columbus student, paddles in the canoe she made using fungi.

Pictured is a chair made out of fungi material by Central Community College-Columbus student and Columbus resident Katie Ayers.

Katie Ayers, Columbus resident and Central Community College-Columbus student, has a passion for fungi. Pictured are the many items she created using fungi as building material.