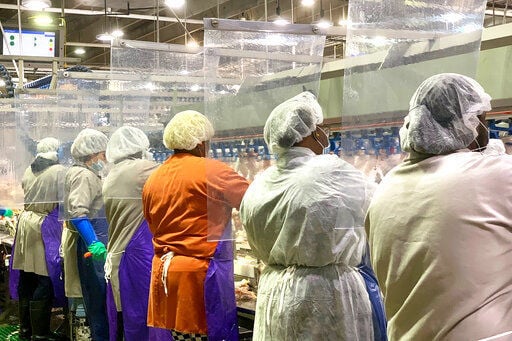 In this photo provided by Tyson Foods, workers wear protective masks and stand between plastic dividers at the company's Camilla, Ga., poultry-processing plant. Tyson has added the plastic dividers to create separation between workers because of the coronavirus outbreak. 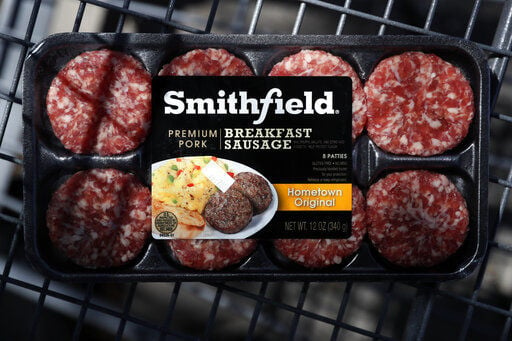 In this April 14 photo, a package of Smithfield Foods breakfast sausage sits in a shopping cart outside of a grocery store in Des Moines, Iowa.

OMAHA — Daily reports of giant meat-processing plants closing because workers tested positive for the coronavirus have called into question whether slaughterhouses can remain virus-free.

According to experts, the answer may be no.

Given that the plants employ thousands of people who often work side-by-side carving meat, social distancing is all but impossible. Because of that, the risk of catching the virus will likely remain even as companies take numerous steps to increase protections for workers.

“It’s not that people aren’t trying. It’s just that it is very difficult to control this illness,” said Dennis Burson, an animal science professor at the University of Nebraska-Lincoln.

The list of companies dealing with infected workers has been growing every day at plants across the country. Among the latest was the closure Wednesday of Tyson Foods' huge pork-processing plant in Waterloo, Iowa, after numerous workers tested positive. That follows closures of a Smithfield Foods pork plant in Sioux Falls, South Dakota; a JBS beef plant in Greeley, Colorado; and many others. Some, including the Tyson pork plant in Perry, Iowa, have reopened after deep cleanings.

The closures shouldn't cause any immediate meat shortages or big price jumps at supermarkets, but as Purdue University economist Jason Lusk noted, “It’s a very fluid and volatile situation to keep an eye out for in the days to come."

Iowa Gov. Kim Reynolds, whose state leads the nation in pork production, acknowledged the likelihood of “clusters of positive cases" at meat-processing plants but said the operations must remain open.

“Without them, people’s lives and our food supply will be impacted," Reynolds said.

Nebraska Gov. Pete Ricketts has echoed those comments amid outbreaks in several counties with packing plants.

In an attempt to protect workers, companies have started checking employee temperatures before they start their shifts, staggering breaks and altering start times. Owners said they have also done more to clean plants, added space for workers to spread out on breaks, slowed production lines so workers can spread out and added plastic shields between work stations.

“We are looking for countless ways of ensuring we have good, healthy social distancing in our plants. It’s not impossible despite the number of people in our plants," said Hector Gonzalez, Tyson's senior vice president of human resources.

Major meat companies, including Smithfield, Tyson, Cargill and JBS, said they also relaxed their attendance and sick leave policies to encourage sick workers to stay home and allow them to be paid. The North American Meat Institute trade group says companies are sharing information about their safety practices to help the industry respond to the outbreak.

Still, workplace safety expert Celeste Monforton said some companies are doing more than others, and it's difficult to ensure people working so closely together won't spread the virus.

“The scary thing is you know if it could happen in one plant, the potential is there for a lot of other plants,” said Monforton, a lecturer in public health at Texas State University. “Unless you’re super vigilant, this is a recipe for disaster.”

Even companies with the best intention may have trouble given that plant layouts make 6-foot distancing difficult, said Jim Roth, director of the Center for Food Security and Public Health at Iowa State University. Precautions such as face masks and plastic shields can help but likely won't stop the risk, he said. In some cases, plants may be able to spread workers out by slowing down operations, but the feasibility of the change depends on the layout of each plant and would reduce a plant's capacity.

“They were constructed to have people stand next to each other and work, and that’s very difficult to change,” he said.

Edgar Fields, president of the Southeast Council of the Retail, Wholesale and Department Store Union, which represents thousands of poultry workers, said it’s hard to know if the precautions at plants will protect workers.

“We say 6 feet … but what is enough?" Fields asked. “What else is it that we can ask them to do to try to protect their employees when they walk in the door and when they walk out. I don’t know. All of this is new.”

Alejandra Wehunt, 22, of Gainesville, Georgia, said she stopped going to work at a poultry-processing plant as soon as she found out a male worker she knew had tested positive for COVID-19.

“I have a young daughter. I live with my grandmother. I have seizures and heart problems. I can’t catch anything,” said Wehunt, a single mother who trims and marinates the chicken with seasoning at the plant. “If one person got it, probably many others have it too. He was around other people.”

Wehunt said the plant manager at the Gold Creek Foods plant had told workers that, despite the pandemic, they had to show up to work or they could risk losing their jobs.

“Why are we losing our jobs because we don’t want to put our health in jeopardy?” she said.

A Gold Creek Foods spokesman did not respond to phone calls seeking comment.

Joshua Specht, a University of Notre Dame history professor who has studied the meat industry, said it relies on workers at the margins of society — including recent immigrants — who don't have a safety net and therefore feel pressure to continue working even if they are ill.

“With workers in close proximity, working long hours, and feeling pressure to continue even when sick, the meat industry is at particular risk for pandemic-related disruptions,” Specht said.

Copyright 2020 The Associated Press. All rights reserved. This material may not be published, broadcast, rewritten or redistributed without permission.

Ethanol producer ADM said Thursday it is idling production at its corn ethanol plants in Cedar Rapids, Iowa, and Columbus, furloughing 90 employees in each facility for at least four months.

In this photo provided by Tyson Foods, workers wear protective masks and stand between plastic dividers at the company's Camilla, Ga., poultry-processing plant. Tyson has added the plastic dividers to create separation between workers because of the coronavirus outbreak.

In this April 14 photo, a package of Smithfield Foods breakfast sausage sits in a shopping cart outside of a grocery store in Des Moines, Iowa.