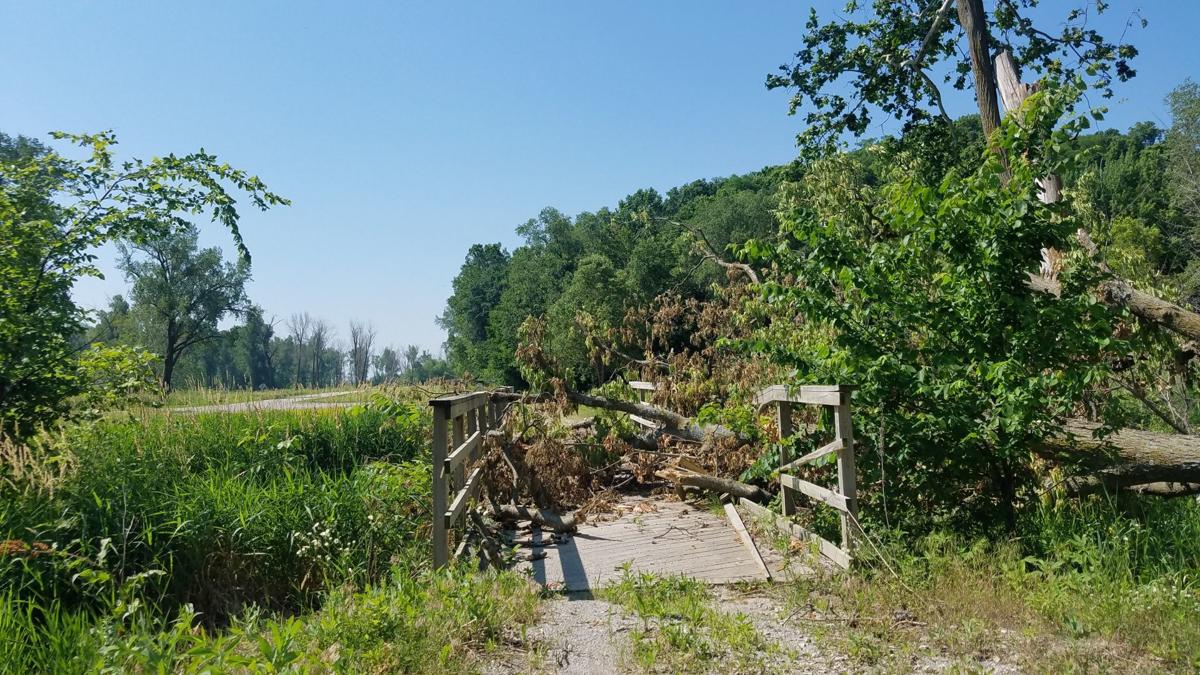 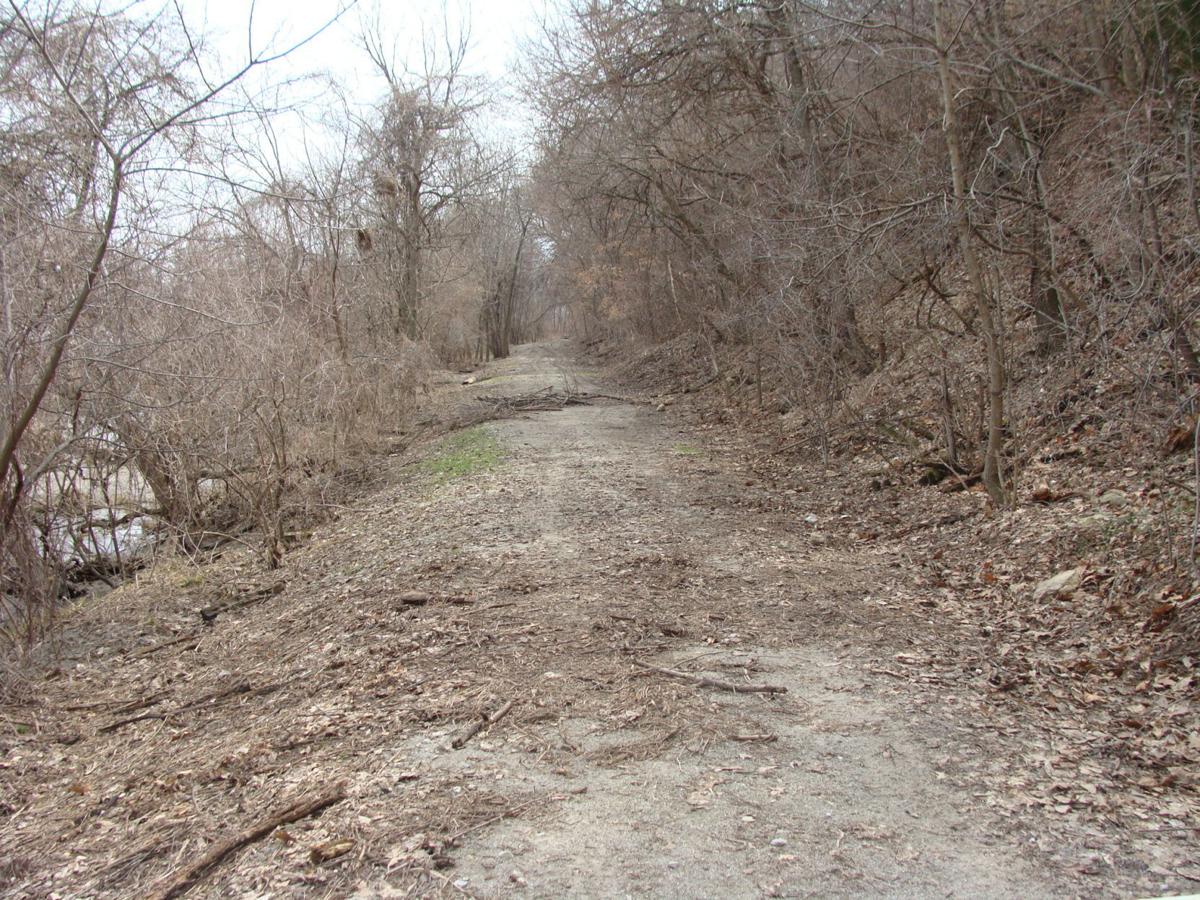 The Missouri River flood of 2019 left trees and debris scattered on the Steamboat Trace Trail. 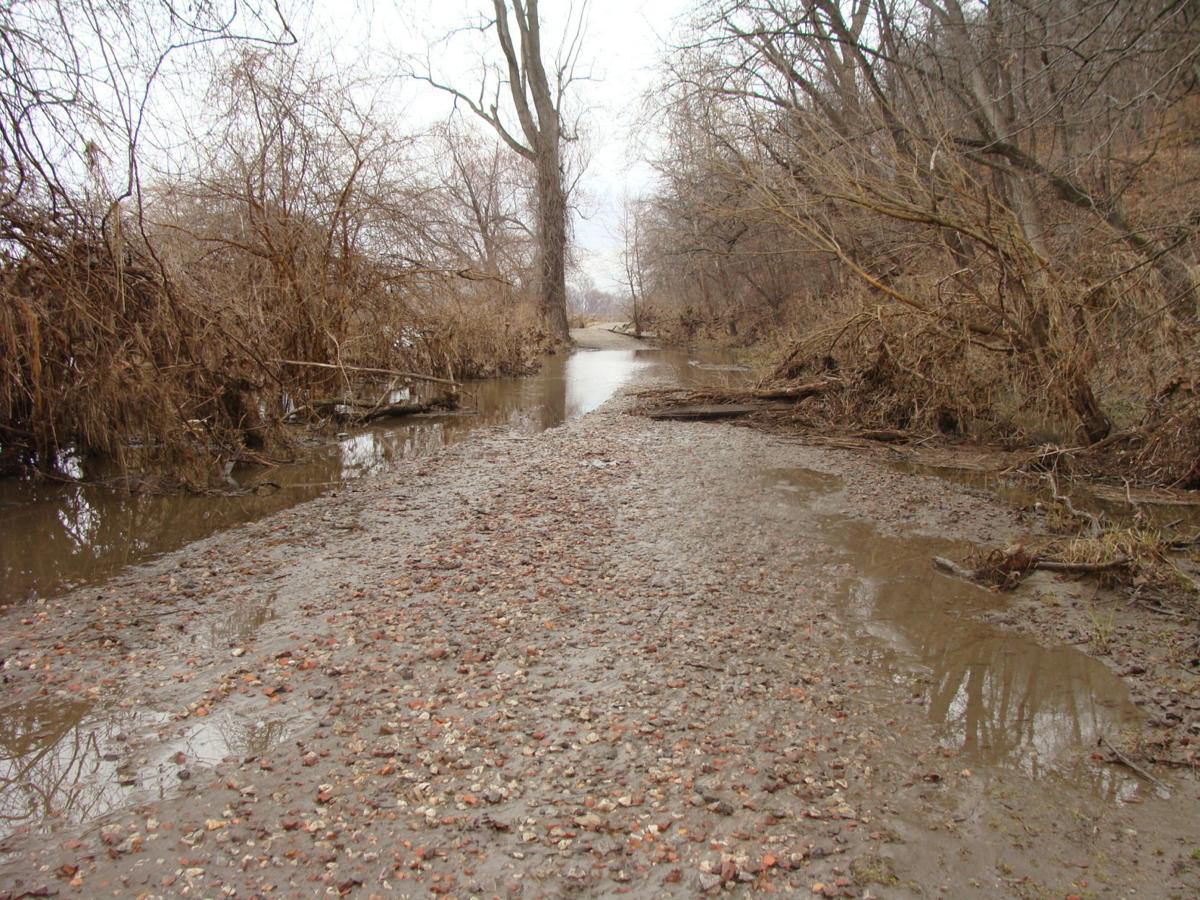 The Nemaha Natural Resources District found water covering the trail last spring, more than a month after the heavy flooding.

BROWNVILLE — The Steamboat Trace Trail owes its scenery and splendor to the nearby Missouri River, which it hugs for nearly two dozen miles between Nebraska City and Nemaha in the state’s southeast corner.

It’s a peaceful, rural ribbon cutting through the bottomland trees, past natural springs and beneath sandstone bluffs.

But the river has also been ruthless to the trail.

Construction crews found themselves mired in mud and sinking behind schedule when they spent two years turning the former Burlington Northern rail route into the 22-mile recreational trail in the late 1990s.

After the trail opened, floods tore it apart in 2007 and 2011, sweeping away stretches of its surface and replacing them with downed trees and debris.

But none of that compared to what the Missouri threw at it in early 2019. It covered some segments with sediment. It toppled trees. It scraped away the limestone surface and, in some areas, the railroad ballast beneath it. A few areas even caved into the current.

“We’re talking about historic levels of flooding,” Hilske said. “Parts of the trail that got flooded this time were never flooded in the past. This is a lot worse than we’ve had.”

And for the second summer in a row, the entire stretch of the trail remains officially closed, with no immediate plans to reopen.

Contractors and NRD crews have been busy clearing the trail of debris, but that’s just the first step in the Steamboat Trace’s revival, Hilske said.

The pace and schedule of the remaining repair work depend on FEMA funding, related work by the U.S. Army Corps of Engineers and a soul-searching question by the Nemaha NRD board: How much longer can it continue to fund its flood-prone trail?

And two of those three issues remain wildcards.

The good news: The district was already approved for about $240,000 in FEMA funds, or 75% of the damage estimate, Hilske said.

But decisions by the Corps and the board will determine the future of the trail.

Stretches of the Steamboat Trace near its midpoint at Peru — considered the most scenic segment — are still flooding because of a broken levee, Hilske said.

So each rise of the Missouri, either from heavy rains or upstream releases, can blanket the Steamboat corridor with fresh floodwater.

“If the river gets up to bankfull, it will start flooding the bottoms,” he said. “And the bottom is so flat it will cover the trail.”

The Nemaha district can’t make repairs there until the levee is fixed, and it’s unclear when, or if, it will be restored. The Corps has placed the levee on its inactive list —meaning it’s not obligated to repair it — though State Sen. Julie Slama and others are working with state and congressional officials to convince the Corps to get it fixed.

But the threat of repeated damage could make the NRD board reluctant to commit its own repair money.

“I’ll be honest, the cost to the NRD and the repeated flooding is making some board members question our commitment,” said Chairman Bill Niedfeldt. “I’m not saying we’re not going to keep it open, but it’s probably a discussion we’re going to have in the next six months.”

Recreation is part of the district’s mission, he said, but it gets more return on its investment from its lakes — Iron Horse Trail Lake near DuBois, Kirkman’s Cove near Humboldt and Duck Creek near Auburn.

“Compared to the use by the public, the bike trail is minimal compared to the three lakes. But it’s still important. We don’t have many trails in this part of the state.”

The district doesn’t keep concrete numbers, but Hilske guessed between 4,000 and 5,000 hikers and bikers use the Steamboat Trace annually.

Niedfeldt would like to see the trail reopen and stay open, he said, but he’s only one of the 21 directors who control the budget, and he didn’t have a clear view of how his colleagues felt.

Hilske understands, he said. “Anytime you get multiple events like we had over the past 10 years, they’re going to start questioning the validity of trying to repair the trail.”

In good years, the district already spends about $30,000, plus staff time, on maintenance, he said. And it’s been forced to spend more during bad years.

If the levee is repaired, and the district approves the trail work, district crews and contractors could begin repairing the Steamboat Trace next year, and possibly reopen part of it before 2022.

“Once we get rolling, we could knock out repairs fairly quickly,” Hilske said.

Which would be welcome news to Dan Hanson. The president of Peru State College and his wife, Elaine, moved to Southeast Nebraska in the summer of 2009, and fell in love with the trail — particularly the stretch south of Peru.

When it was open, they rode several nights a week, and sometimes several times during weekends.

“It’s beautiful, in terms of foliage and trees,” he said. “Beautiful bluffs, sandstone cliffs and it comes right up along the river.”

But it’s also important to the community. Hanson is on the city’s long-term economic recovery team, trying to help the area rebound from last year’s flooding, and they worked with the state Department of Economic Development to gauge the flood’s toll on the region.

They estimated the loss of tourist attractions — including the trail — had kept more than 1,500 out-of-state visitors away.

There are also intangible losses. When they were on their bikes, Hanson and his wife would often see students, and parents of students, and the cross country team spending time on the Steamboat Trace.

Western Nebraska woman was dedicated to goal of veterans memorial

Hazel Kleich, who died in 2017, was the driving force behind the just-finished memorial that is made up of stones engraved with the names of veterans buried in the cemetery.

Even amid the pandemic, campgrounds at state parks and recreation areas have remained popular this summer, according to Nebraska Game and Parks Commission officials. It's especially true this Fourth of July weekend.

Wagon Train Lake has been deemed safe again after a health alert was issued last month due to high levels of harmful algal blooms in the water.

Bike Walk Nebraska organized the Safe Cycling classes after seeing a spike in the number of riders on the road.

Cowboy Trail users are one small step closer to being able to ride 321 miles across Nebraska.

Ben Fitzwater built his boat with what he had around the house, including a riding lawnmower and a beer keg.

Lincoln's newest mountain bike loop could be ready to ride by the end of the weekend.

Cyclists have mapped their own route for years, but the new project formalizes the link between trailheads in Wabash and South Bend, and opens up a 225-mile trail system.

The trail will reopen Nov. 23.

Landowners should be paid for flood damage along Missouri River, judge rules

Beyond a potential price tag of hundreds of millions, an NU College of Law associate professor said, the case could have effects ranging from higher costs to protect endangered species to more expensive infrastructure projects along the Missouri.

In mid-December, a federal judge said any other landowners had until Dec. 31 to lodge a claim. In the roughly two weeks since then, attorneys signed up more than 60 property owners. 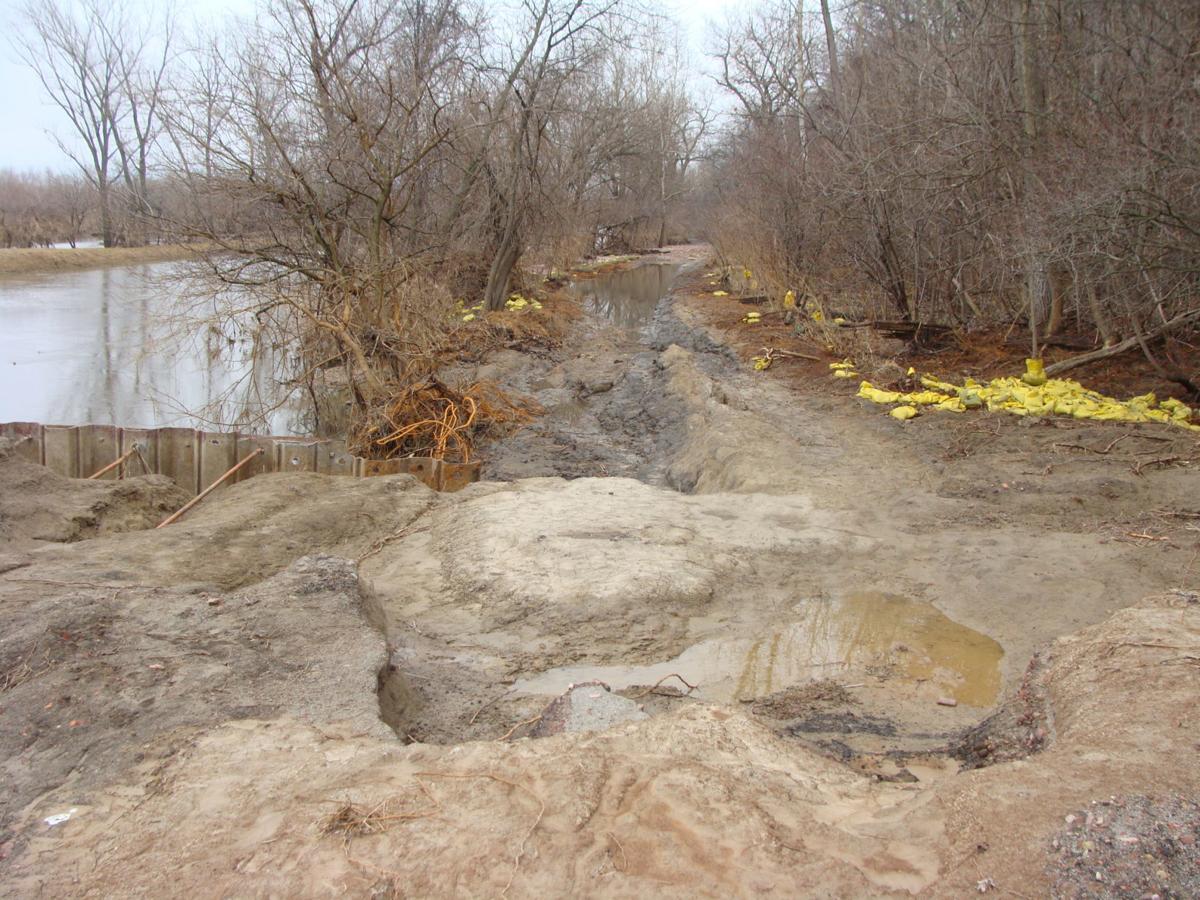 The Missouri River flood of 2019 left trees and debris scattered on the Steamboat Trace Trail.

The Nemaha Natural Resources District found water covering the trail last spring, more than a month after the heavy flooding. 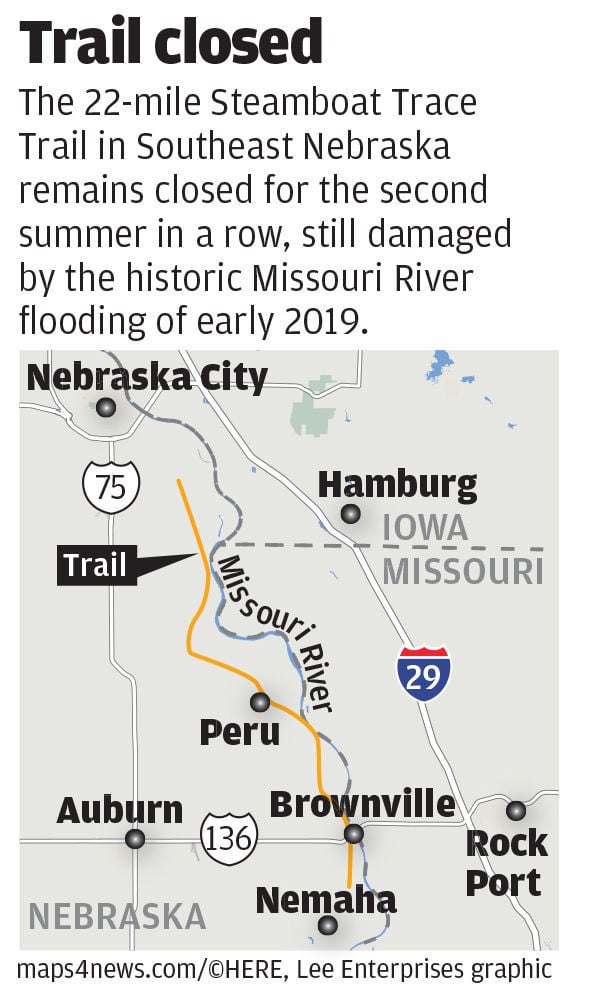