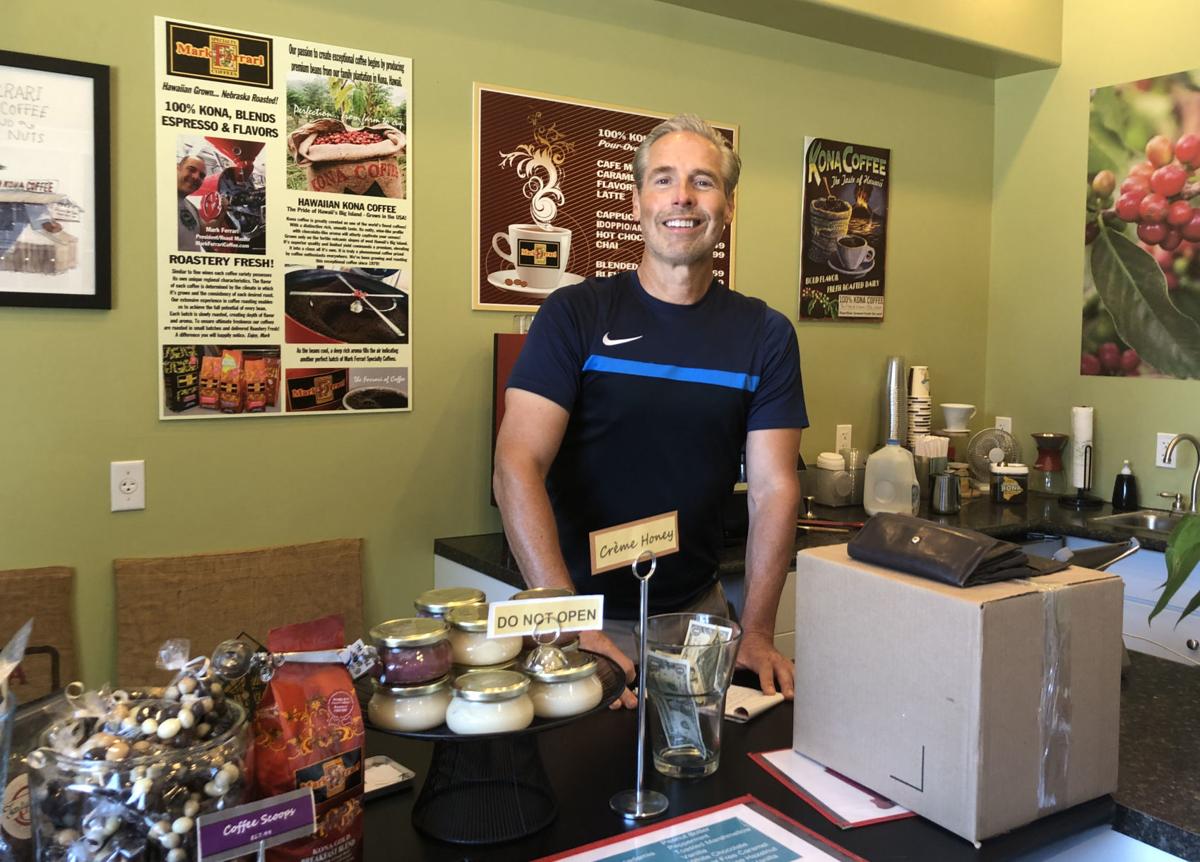 Mike Piva, co-owner of Mark Ferrari Specialty Coffees in Oshkosh, returned to his hometown and opened a coffee business that sources its coffee from Hawaii. 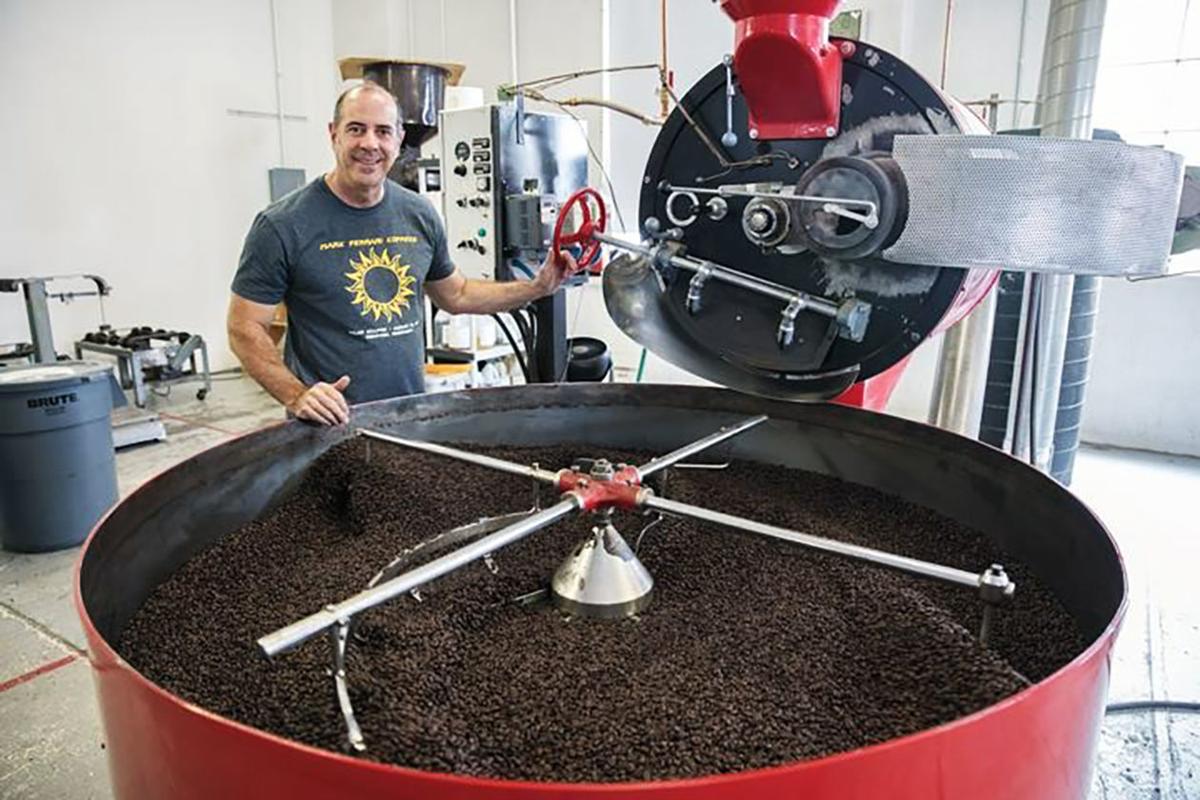 Mark Ferrari stands with the coffee roaster at Mark Ferrari Specialty Coffees in Oshkosh. Much of the coffee comes from his family's plantation in Hawaii and the business's slogan is “Hawaiian Grown, Nebraska Roasted.” 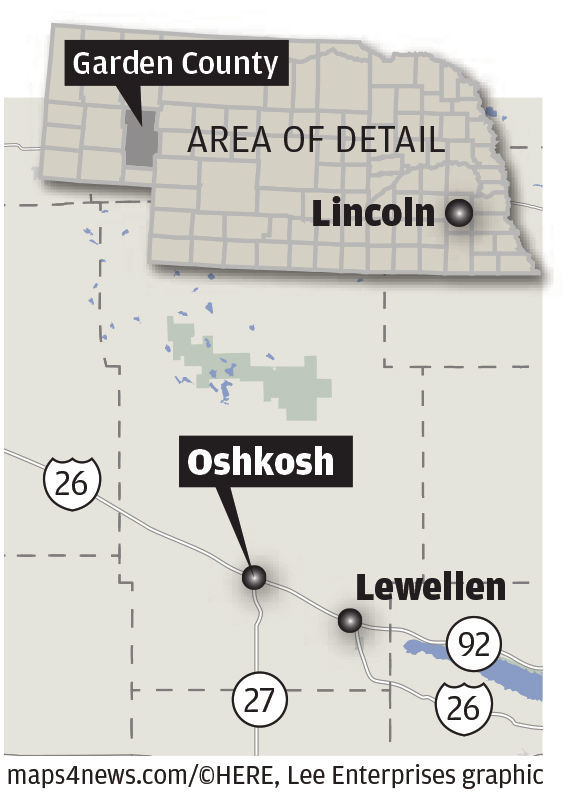 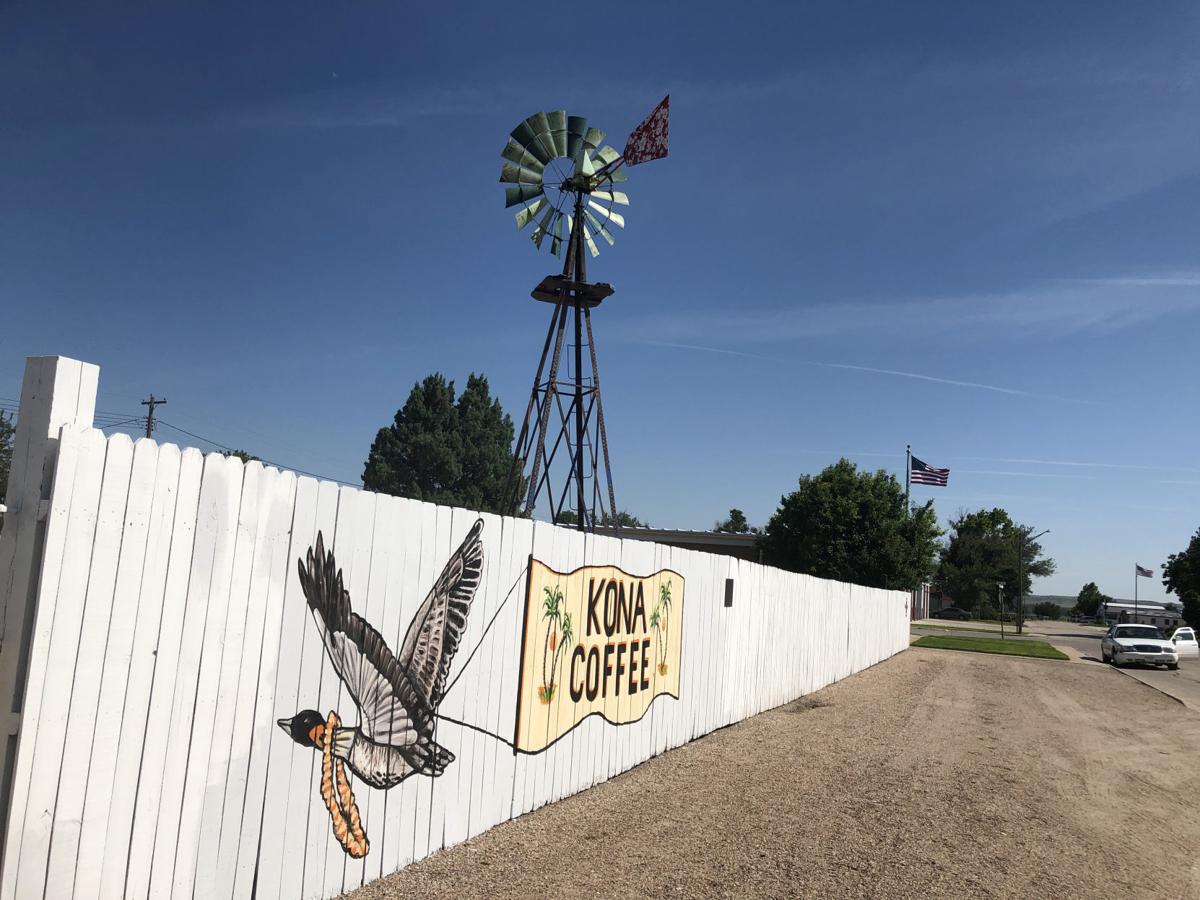 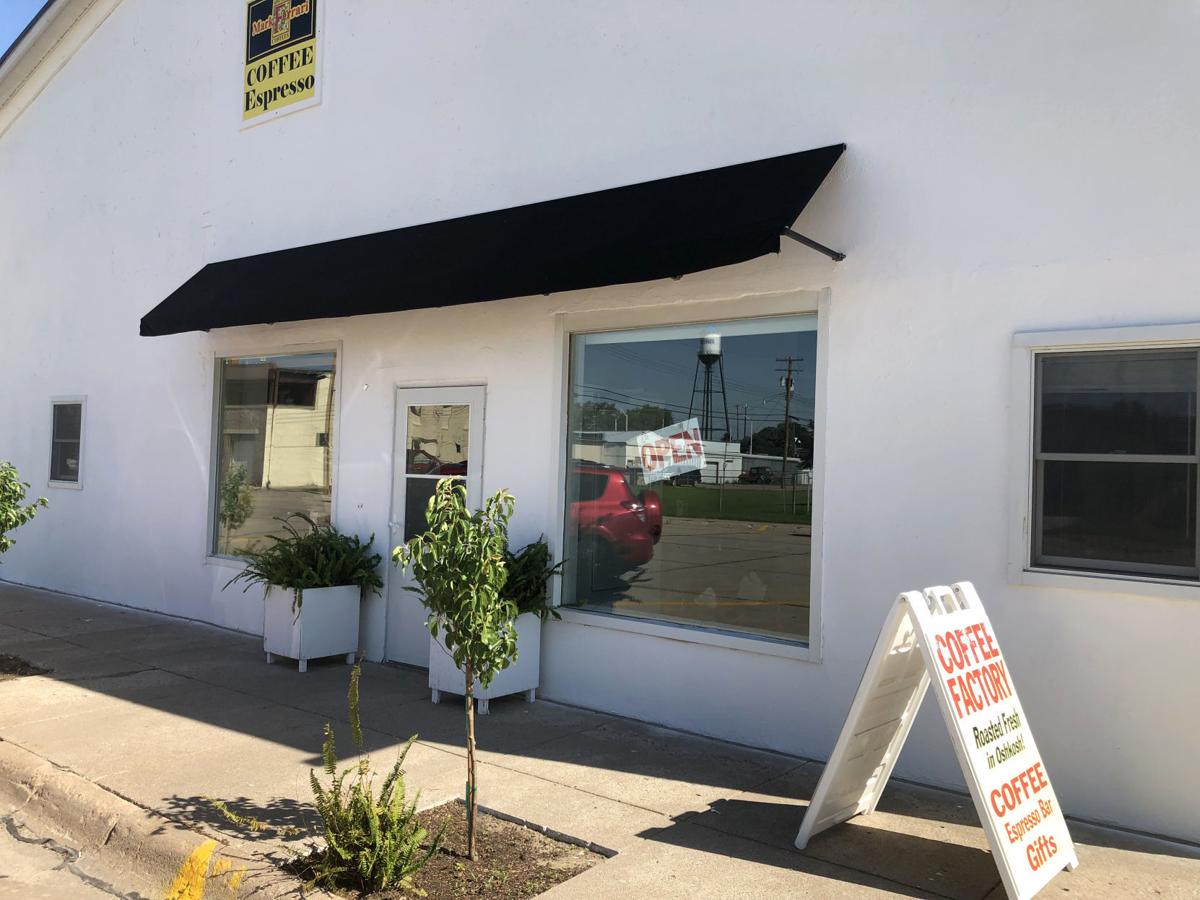 The front of Mark Ferrari Specialty Coffees in Oshkosh. 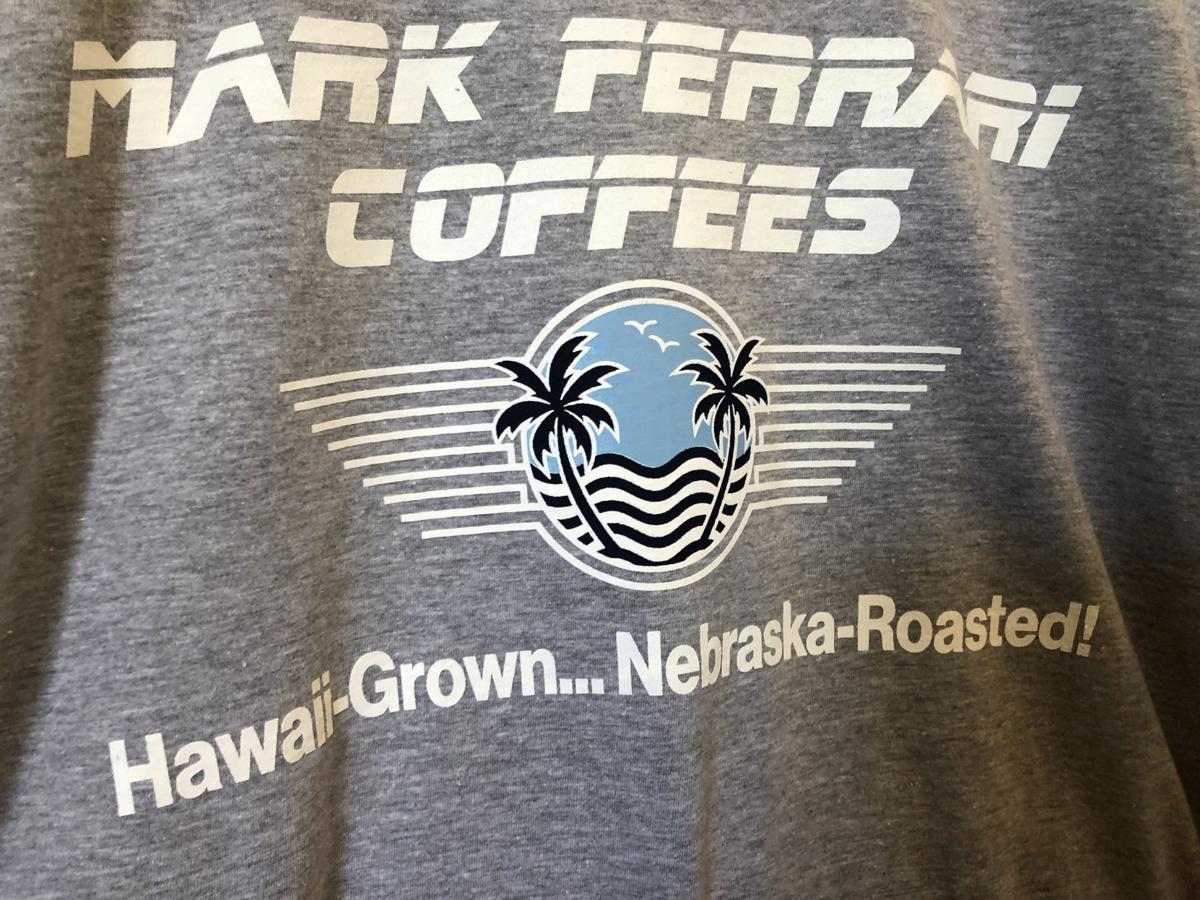 A T-shirt with the Mark Ferrari Specialty Coffees slogan in Oshkosh. 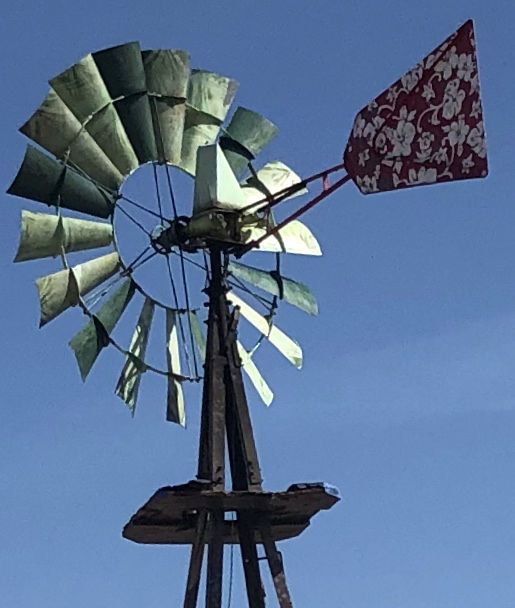 A windmill at Mark Ferrari Specialty Coffees in Oshkosh sports a Hawaiian tail. 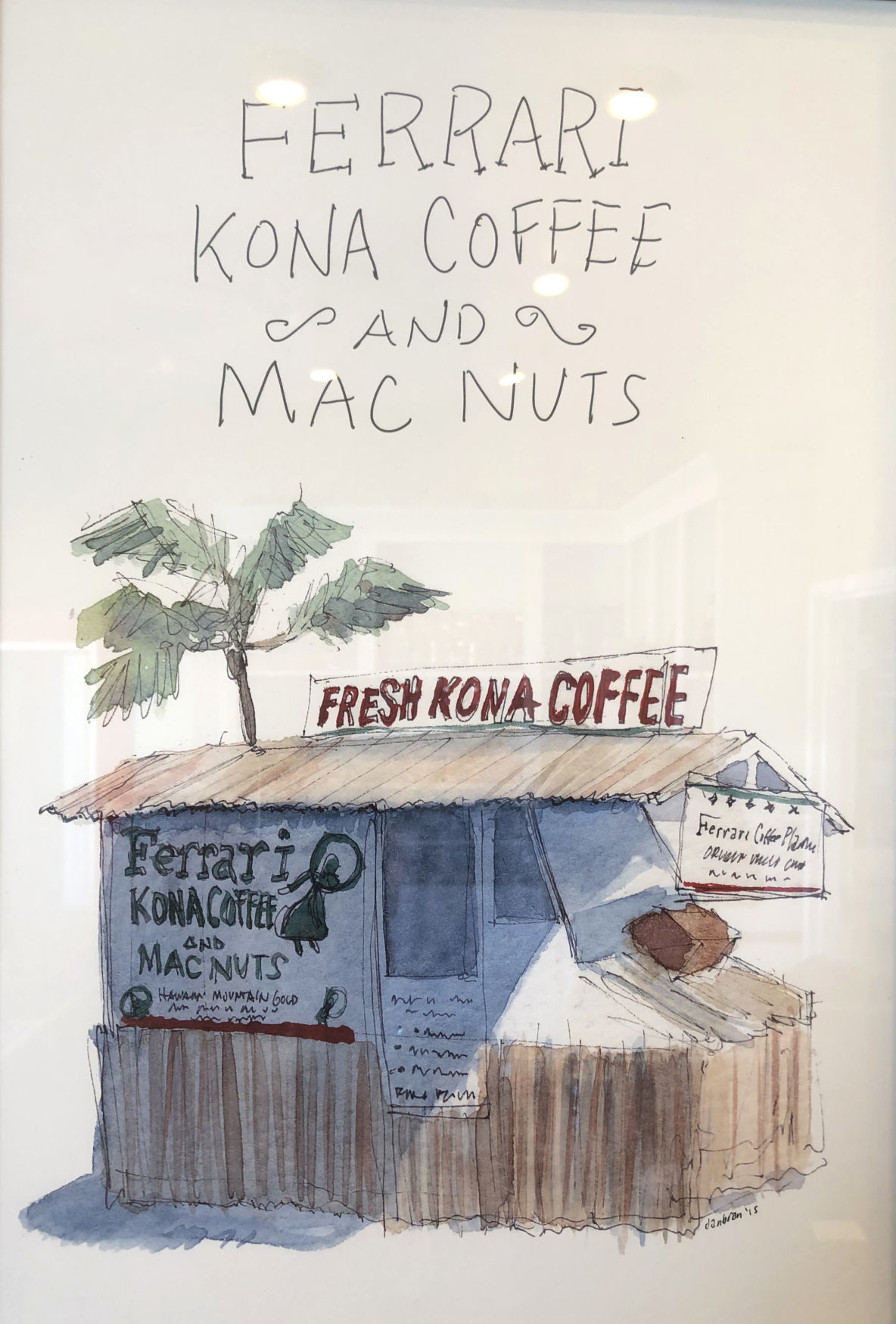 A drawing of the original coffee shop in Hawaii displayed at Mark Ferrari Specialty Coffees in Oshkosh. 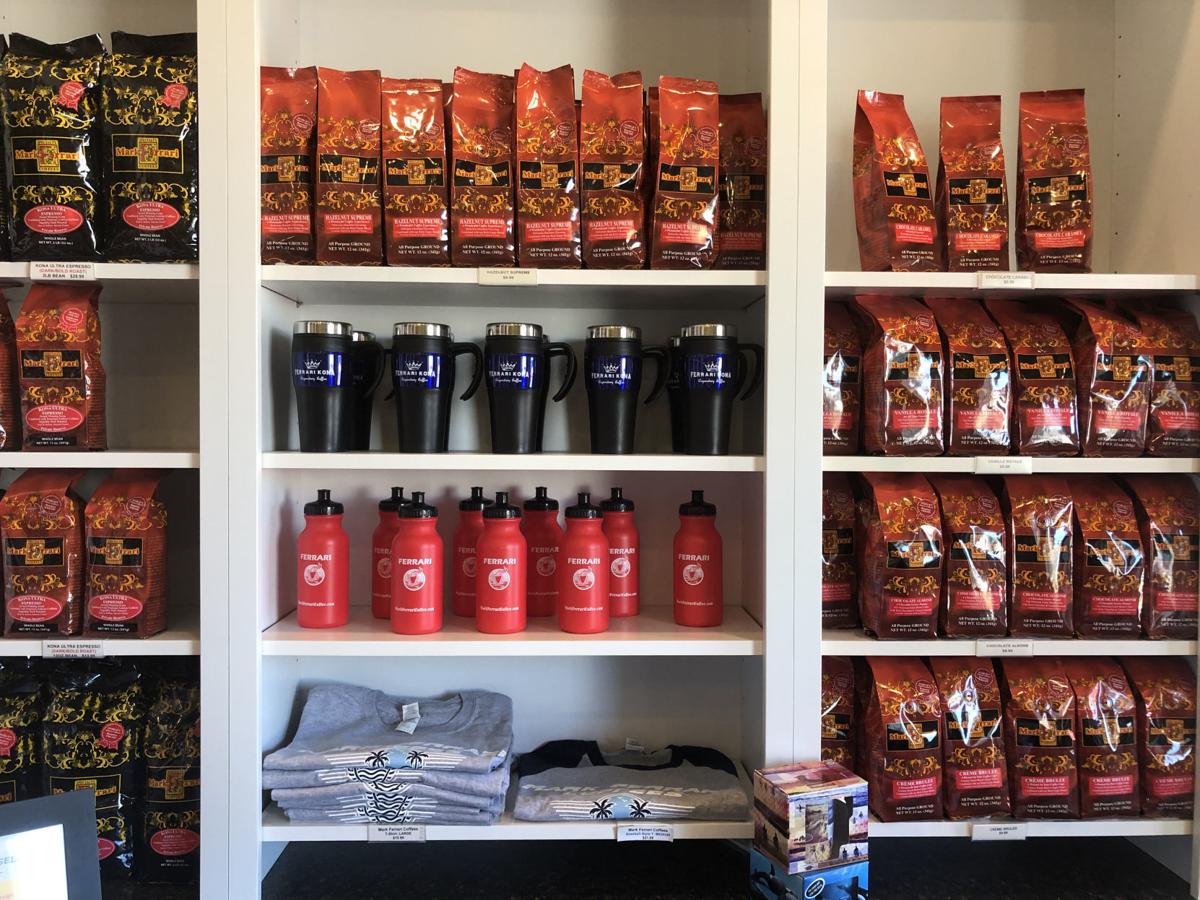 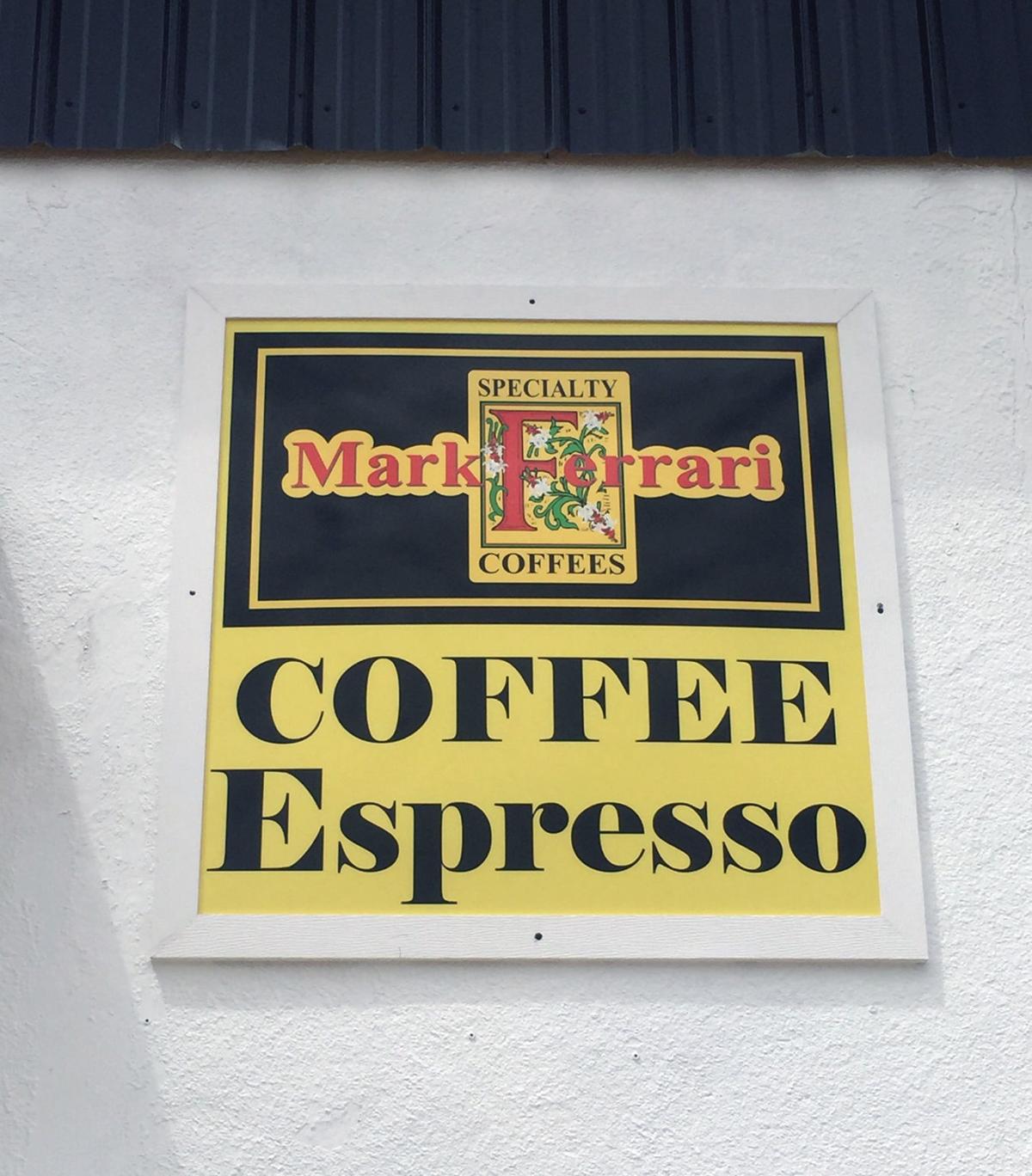 A sign outside of Mark Ferrari Specialty Coffees in Oshkosh.

OSHKOSH — Mike Piva grew up on a farm outside Oshkosh, a small town about 45 miles northwest of I-80 on the southern edge of the Sandhills.

After he graduated from high school, he did what lots of small-town Nebraskans do (much to the dismay of said small towns): left for college, then kept going.

He landed in Phoenix, got a job and started a career.

But then, some years later, he came back, bringing a caffeine-fueled shot of economic development with him.

I discovered this one spring morning when my husband and I — with a Japanese exchange student in tow — set out on U.S. 26 to see the sites in western Nebraska, traversing a part of the state where finding a good cup of coffee is about as likely as finding a gas station.

Before long, though, colorful “Mark Ferrari Specialty Coffees” signs began to appear on the horizon, like a mirage in a desert traveled by coffee-starved motorists.

As it turns out, the coffee was real and it was in Oshkosh and the slogan of the shop that appeared on the horizon was “Hawaiian Grown, Nebraska Roasted.”

My family, in a nutshell.

My husband’s parents grew up in Hawaii, where much of his extended family still lives, and over the past three decades a little of the Hawaiian culture has seeped into our family and my Nebraska-bred self.

I met Piva a year later, when I called the store to see if I could get some “Hawaiian Grown, Nebraska Roasted” coffee to share with my husband’s family at an upcoming reunion in Colorado.

Piva made sure I got the coffee I needed and — when my mom and I stopped to pick it up on our way to Colorado in July — shared the story of how coffee from a family plantation on Hawaii’s Big Island ended up in a roaster a block off Oshkosh’s main street.

The pull of rural America runs through his story, and how its grown-up children want to help keep their hometowns alive.

Piva was the youngest of three children who grew up on the farm his parents had inherited from his grandparents about a quarter-mile east of Oshkosh.

He liked being in his hometown — his parents joked they didn’t think they could get him off the porch to go to college — but he did, and in 1986, after four years at what was then Kearney State College, he left for Phoenix in search of ... something.

“I wanted to do more stuff,” he said. “I didn’t know what that stuff was, so I kind of closed my eyes and went.”

He landed a job in a corporation, a world of tuxedo-wearing social engagements and fundraisers that ultimately led to a career in information technology.

At those fundraisers he kept running into a guy named Mark Ferrari and his sister Nikki, who were in the coffee business.

They became friends, though they'd grown up very differently.

The Ferraris grew up on both coasts, and Mark Ferrari attended a preparatory boarding school. After college, he moved to Hawaii, where his parents now lived and owned a coffee plantation.

Mark Ferrari became close friends with the owners of a neighboring coffee farm who'd delved much deeper into the coffee business than his parents, Piva said.

They were master coffee growers, and taught Mark Ferrari the business, and to respect the work it took to produce a bean that can make an exceptional cup of coffee.

“That’s when his passion really started to develop,” Piva said.

Ferrari's sister also moved to Hawaii, and by the time Piva met them they’d created their own coffee business, which had grown from a roadside stand to shops in resort towns and then to Phoenix, where Ferrari hoped to expand the business’s presence on the mainland.

When Mark Ferrari decided to start another company in Phoenix separate from the one run by his sister, he asked Piva to be a silent partner.

His sister continued to run Ferrari Coffee Co. in Hawaii, and Mark Ferrari Specialty Coffees grew on the mainland, where it sold to large retailers. The business has evolved to primarily online sales, with Amazon as one of its biggest customers.

By the mid-2000s, Mark Ferrari and Piva wanted their own production facility, where they could roast their own beans and have more control over the product, Piva said.

The Nebraska native thought of Oshkosh.

“I always wanted to come back home,” he said. “But I didn’t know what it would look like.”

Working out of Oshkosh had distinct advantages: a central location for shipping purposes located less than three hours from the Denver airport, and significantly lower overhead costs.

They bought a mechanic shop with graffiti on the walls — a John Deere dealership when Piva was a kid — and renovated it.

Piva had always dreamed of having a business on main street.

Since then, the coffee business has operated from the building with a white-stucco storefront. The production facility is in back, a small coffee shop in front.

A local artist — an art teacher named Lauren Olson — painted the native Hawaiian Nene bird on a white picket fence behind the building and a Hawaiian motif on a windmill on the property.

Mark Ferrari and Piva take turns traveling back and forth between Phoenix and Oshkosh, but Piva has spent much of the last 18 months in Oshkosh to be near his dad, who recently died.

Over the last year, he's slowly moved onto the family farm and turned the farm fields into natural grasslands.

He remembers the city’s leaders from his youth, nice people, engaged in their community.

“That was a big part of my coming home,” he said. "I wanted to be fun and enjoy life like they did.”

And so he’s dug in. Piva was appointed to the City Council in February.

He and Ferrari bought another building along the highway on the east entrance to town that was going to be torn down, fixed it up and sold coffee, wine and beer there for a while. They sold that building and it now it houses insurance offices.

His latest project: Saving the town’s 100-year-old water tower with his sister and her friend — neither of whom live in Oshkosh.

They sold memorial bricks to residents and Garden County High School alums living across the country. They're building a plaza around the water tower to hold events and plan to light it up with school colors for the first football game.

“The point is we need to honor our past and the history of our town,” Piva said. “That’s what makes it special.”

He thinks one of the coffee business’s biggest benefits to Oshkosh — the largest town in sparsely populated Garden County — is helping improve its curb appeal.

“I think that’s what’s kind of missing in small communities,” he said. “It’s curb appeal that gives us that advantage and attracts others to the community.”

Oshkosh has changed, Piva said. It’s a different Main Street today, and the population in the area is more mobile. But other grown-up kids have returned — the children of the grocery and hardware store owners who have taken over the businesses from their parents.

Piva's not sure he'll settle there full-time, but he'll be a part of his hometown. Because he believes in the potential.

Places for great food in Nebraska

It is not a fork and steak knife type of place.

Nitro Burger steps off the streets and into a restaurant

Teriyaki Madness has closed its doors.

While most Nebraskans (the football-loving ones, anyway) are watching the season debut of Scott Frost and his Huskers on Saturday, a group of …

The local home market did something over the summer it's never done before.

Mike Piva, co-owner of Mark Ferrari Specialty Coffees in Oshkosh, returned to his hometown and opened a coffee business that sources its coffee from Hawaii.

Mark Ferrari stands with the coffee roaster at Mark Ferrari Specialty Coffees in Oshkosh. Much of the coffee comes from his family's plantation in Hawaii and the business's slogan is “Hawaiian Grown, Nebraska Roasted.”

The front of Mark Ferrari Specialty Coffees in Oshkosh.

A T-shirt with the Mark Ferrari Specialty Coffees slogan in Oshkosh.

A windmill at Mark Ferrari Specialty Coffees in Oshkosh sports a Hawaiian tail.

A drawing of the original coffee shop in Hawaii displayed at Mark Ferrari Specialty Coffees in Oshkosh.

A sign outside of Mark Ferrari Specialty Coffees in Oshkosh.