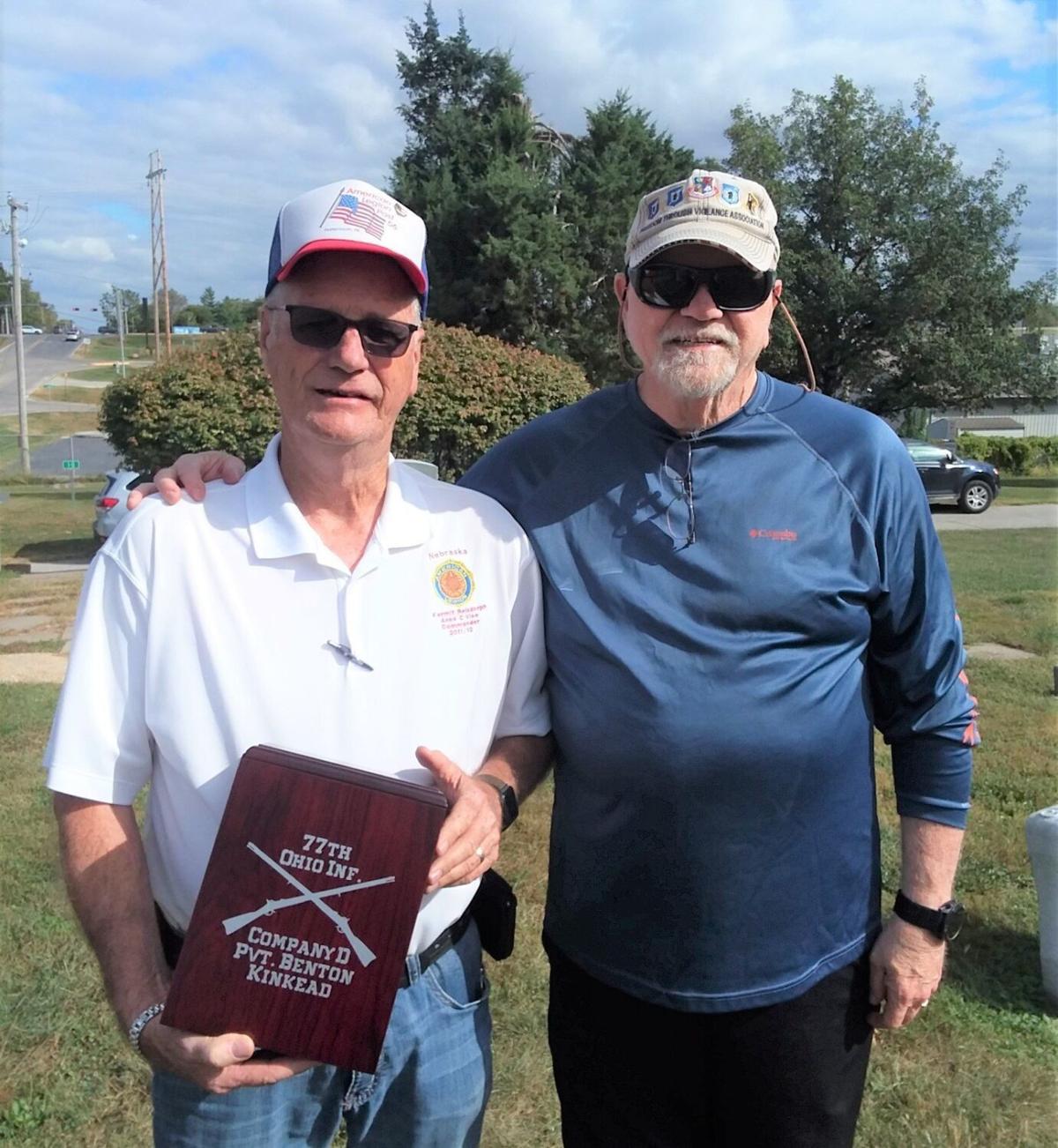 Plattsmouth veterans Kermit Reisdorph and Mike Pauly with the cremated remains of Benton Kinkead, a Civil War veteran who lived in Plattsmouth from 1876 until the 1910s. Kinkead’s ashes were discovered at a Seattle funeral home, where they had apparently been stored since his death in 1916. 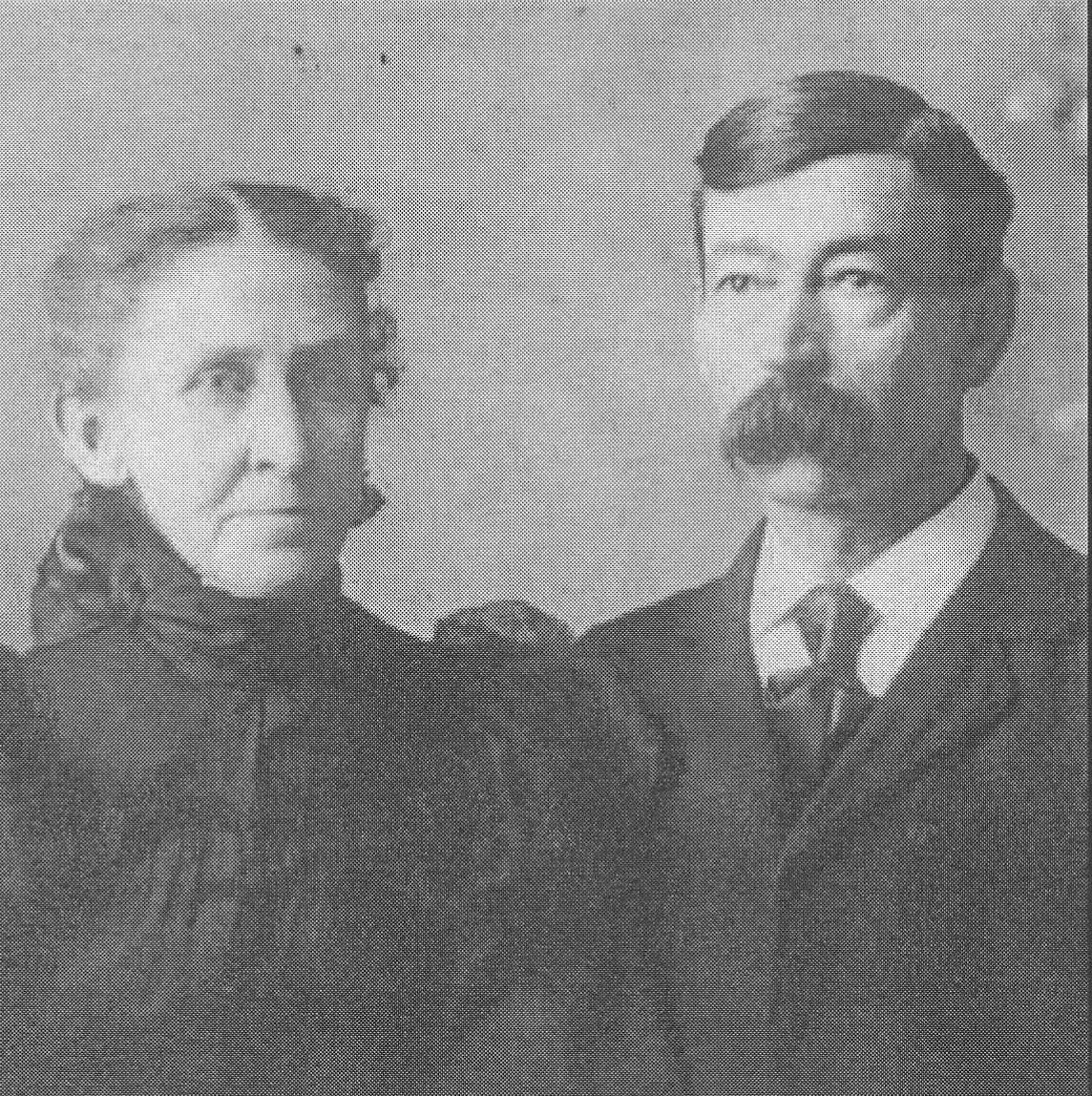 A portrait of Cynthia and Benton Kinkead. Benton will be buried with full military honors next to his wife at Plattsmouth’s Oak Hill Cemetery on Oct. 30. 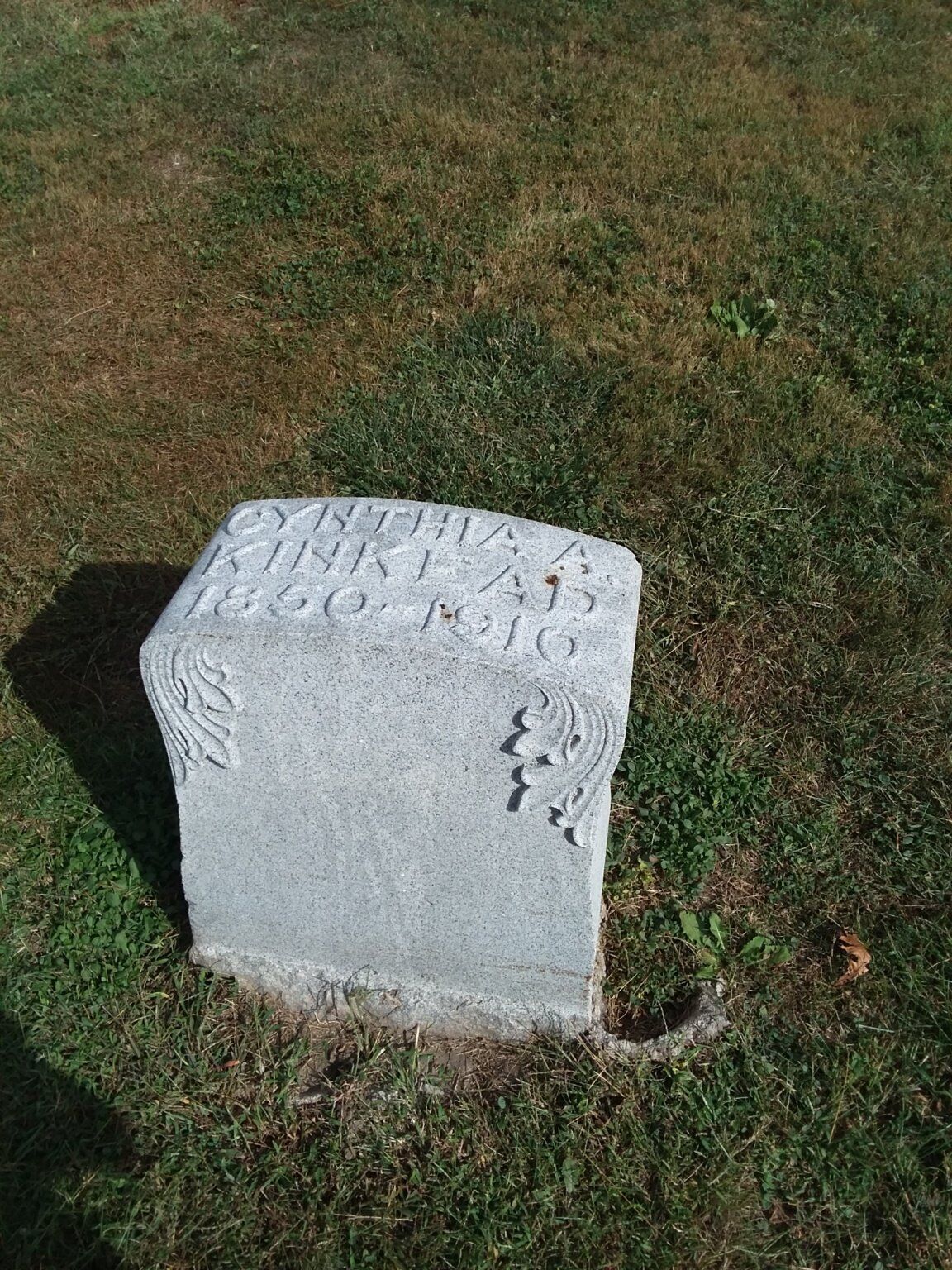 Cynthia Kinkead died of an apparent heart attack in 1910. Her husband Benton, a Civil War veteran, moved in with his daughter in Seattle soon after, and he died there Nov. 8, 1916. 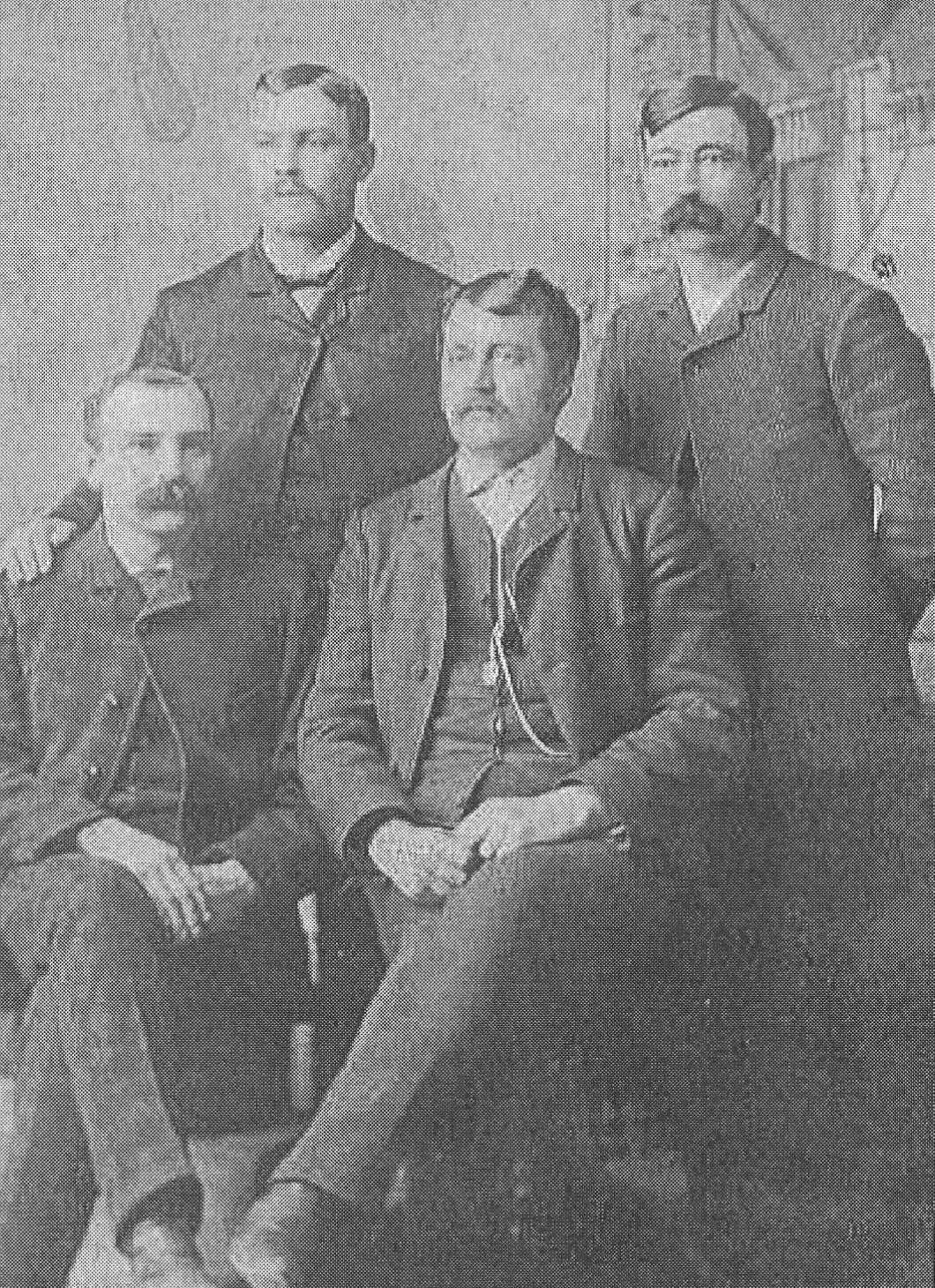 Benton Kinkead (right) with his brother, Selwin (left), and their brothers-in-law, Doug Shinn (upper left) and Jake Honnold (lower right). Selwin was Benton’s partner in a house-painting business in Plattsmouth for several years. 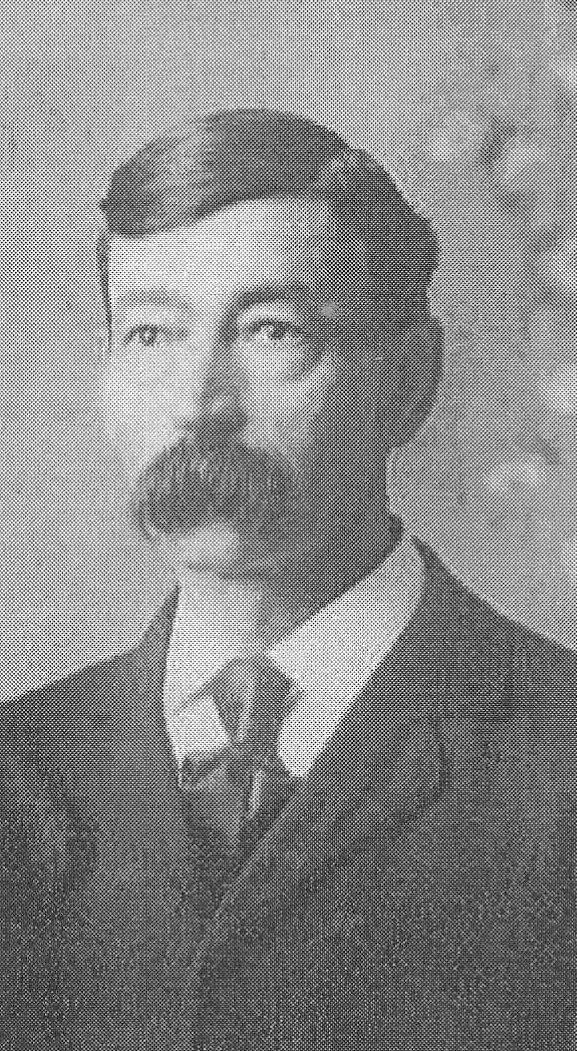 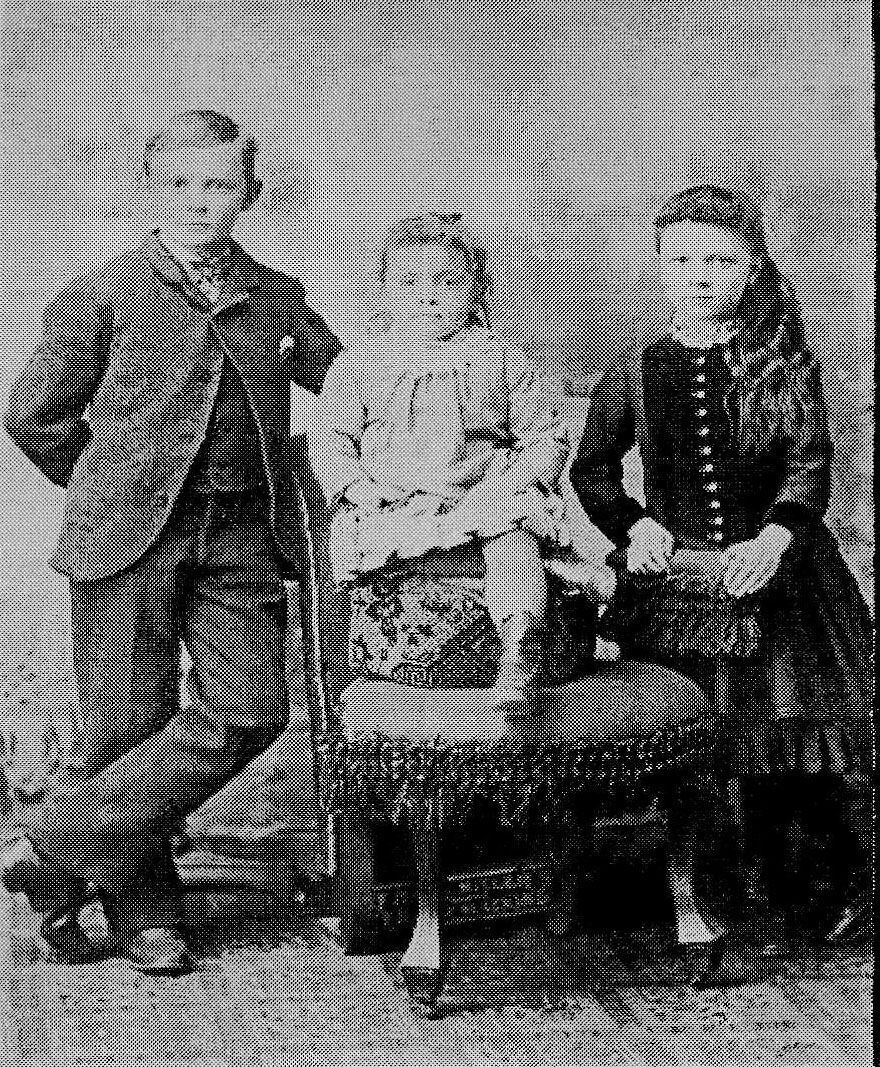 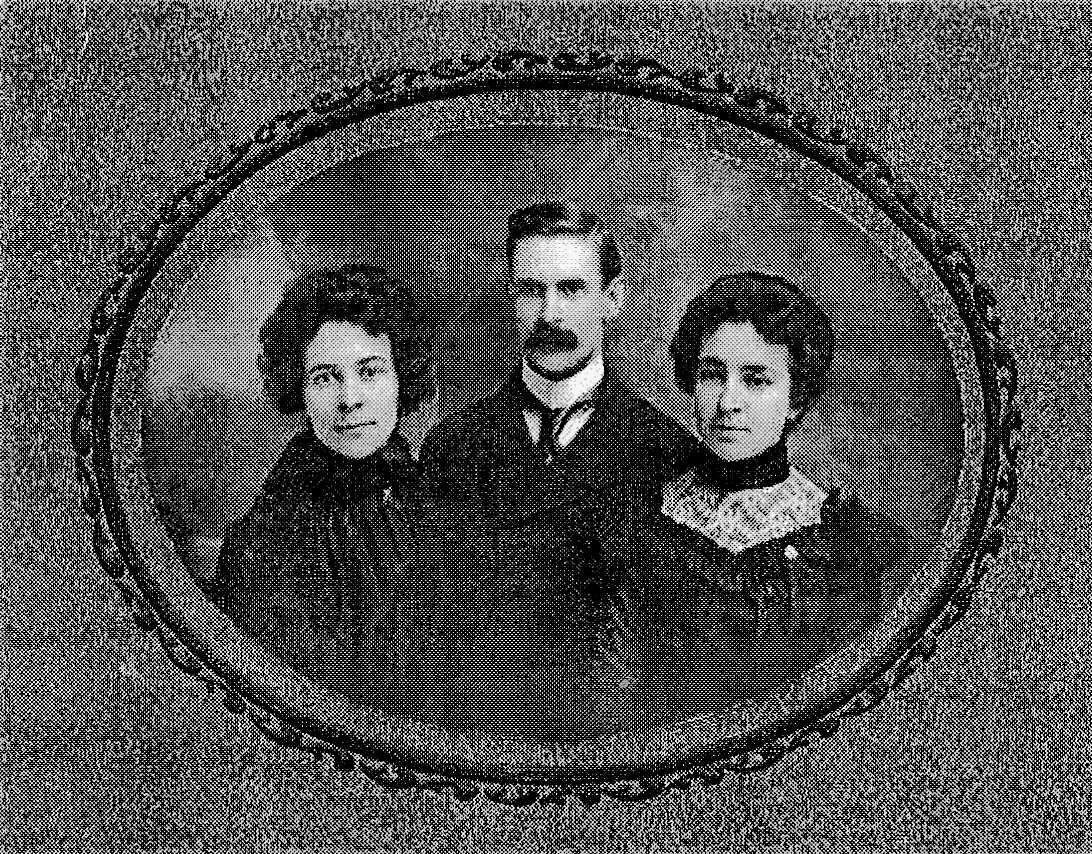 PLATTSMOUTH — Cynthia Vest Kinkead has rested alone beneath a white headstone in her family’s large burial plot near the east entrance to Plattsmouth’s Oak Hill Cemetery ever since her death, in 1910.

She’s about to get some company in that lonely patch of grass.

Later this month, her husband, Civil War veteran Benton Kinkead, will be laid to rest beside her — just a few weeks after the unlikely discovery of his cremated remains in a Seattle funeral home 105 years after his death.

It’s believed he will be the first Civil War soldier buried in Nebraska in almost 75 years.

Kinkead, an Army private, fought for the Union forces to save the divided country more than 150 years ago, and was wounded in battle. On Oct. 30, he’ll finally be buried with full military honors — the folded flag, the bugled taps, the rifle salute — honored by veterans whose grandparents weren’t yet born when he performed his patriotic duty.

“He’s a veteran. He’s going to get a proper burial,” said Kermit Reisdorph, an Air Force veteran and former Plattsmouth American Legion commander, who is helping plan the event.

Bill Kinkead, 65, of Duvall, Washington, was stunned to get a call from Nebraska earlier this month about the discovery of the remains of a great-grandfather he barely knew existed. He is probably Benton Kinkead’s closest living relative.

“Well, that’s interesting!” Bill Kinkead said of the discovery. “I think he deserves to be put to rest. It’s kind of interesting that he hadn’t been.”

Nebraska was still a territory when rebels fired on Fort Sumter, South Carolina, to kick off the war in April 1861. More than 3,500 of its inhabitants served in the Union Army, and 239 of them died.

At least 100,000 veterans settled in Nebraska after the war, lured by the prospect of “free” land in the Midwest thanks to the Homestead Act. An estimated 20,000 of them are buried here.

“Ashes from the Civil War, bones brought back from Vietnam — they all deserve it,” said John Surman, department commander for the Sons of Union Veterans of the Civil War in Nebraska and the Dakotas. “It is their blood that guaranteed the freedoms we have.”

Plattsmouth historian Harlan Salyer has pieced together the journey that brought Benton Kinkead from his native Ohio to Nebraska, and back again more than a century after his death.

Kinkead was born Feb. 1, 1845, and grew up on his parents’ farm in rural southeast Ohio. He enlisted in Company D of the 77th Ohio Infantry Regiment in October 1861, along with his brother, Julius.

Benton almost certainly lied about his age, since he was only 16.

No details of their individual service have survived. But Kinkead’s unit took part in the battle of Shiloh, in Tennessee, April 6-7, 1862. It was the bloodiest battle in American history at that point.

The 77th Ohio spent a year guarding military prisoners in Illinois, then returned to action in late 1863 and early 1864. The regiment was nearly obliterated in the battles of Marks’ Mills and Jenkins’ Ferry, Arkansas, in late April 1864, when most of its soldiers were killed, wounded or captured. It saw no further combat during the war.

According to a family history, Kinkead was taken prisoner at Marks’ Mills and released two months later. A Confederate bullet shattered his left ankle, a wound that would trouble him for years. He and Julius left the Army in December 1864 when their enlistments expired.

After the war, Kinkead became a house painter in McArthur, Ohio, not far from his parents’ farm. He married Cynthia there in November 1871.

Five years later, the Kinkeads moved to Plattsmouth with their two children, Ralph and Laura Belle. (A third, daughter Etta, was born in 1880.) As in Ohio, he worked as a house painter — for a time in partnership with his younger brother, Selwin. Cynthia was a member of the First Christian Church, and Benton joined the local Grand Army of the Republic post — the post-Civil War forerunner to today’s American Legion and VFW.

At some point, Kinkead’s mother, Sarah, also moved to Plattsmouth. She died in 1901 of severe burns after her dress accidentally caught fire.

In the early 1900s, Ralph, a tailor, moved to Seattle, while Laura Belle worked as a schoolteacher in Lincoln and Etta was studying art in Chicago. The family got together at Christmas 1909 and decided it would all follow Ralph in moving to Washington state.

But Cynthia Kinkead didn’t make it. On a cold Thursday morning in February 1910, Benton overslept. When he got up, he found Cynthia dead, apparently from a heart attack. She was 60.

By 1913, Benton was living at Etta’s home in Seattle’s Wallingford district. Ralph and his wife, Lillian, lived nearby. So did Laura Belle, who taught at a school in the neighborhood.

Three years later, Benton Kinkead fell ill with pneumonia and died on Nov. 8, 1916, at age 71. He was cremated — a practice far less common at that time than it is today.

But for reasons that are lost to history, his ashes were never claimed by his three children or another relative.

“We don’t know,” said Mike Pauly, an Air Force veteran from Plattsmouth who is working with Reisdorph on Kinkead’s funeral tribute. “That’s where everything kind of drifts into the clouds.”

Bill Kinkead is as baffled as the Plattsmouth veterans. Ralph (who was his grandfather), Laura and Etta all died before he was born, so he never heard many stories of his family history. Donald Kinkead, Bill’s father, died in 2009 at age 89 without revealing many family secrets.

“His father was not someone who would talk about this,” said Trudy Kinkead, Bill’s wife of 35 years. “All the other ancestors died young.”

The mystery would almost certainly have remained buried had a Washington volunteer with the Missing in America Project not discovered Kinkead’s cremated remains this summer at the Butterworth Funeral Home in Seattle.

Across the country, Missing in America Project volunteers visit funeral homes in search of the unclaimed remains of military veterans. Then they arrange for burials, with proper military honors.

The volunteer discovered that Kinkead’s wife and brother were both buried in Plattsmouth. He worked with the funeral home and arranged the shipment to Jesse Clark, the maintenance supervisor at Oak Hill Cemetery.

“Jesse Clark says, ‘Look, you’re not going to believe this, but we’ve got the ashes of a Union veteran,’” Pauly recalled.

Officials at Butterworth would not answer questions about the discovery, but it is plausible Kinkead’s remains have been there ever since his death. The funeral home is within a mile of his last residence, and it has operated on the site since 1905, according to the funeral home’s website.

Pauly and Reisdorph got to work planning a full-scale military service for noon Oct. 30. Surman said it will be authentic, following a template used for the burial of Union veterans more than 100 years ago.

Besides the folded flag and rifle salute, the 1st Nebraska Volunteer Brass Band will play period music on period instruments, while dressed in Civil War-era uniforms. Members of the Plattsmouth High School choir will sing “The Battle Hymn of the Republic.”

Members of the public will be invited to attend.

The ceremony will wrap up with the commander intoning a traditional closing for the burial of Union soldiers, one not heard in Nebraska for decades.

“Taps have sounded. Lights are out. The soldier sleeps. The Camp is dismissed.”

And Benton and Cynthia Kinkead will rest in peace, together.

Students can join the prep program as freshmen and complete the program throughout the course of their four years at UNL or join with just two semesters left.

Nebraska woman with cancer reconnects with pen pal from Wisconsin

Dorothy Reicks of Pierce and Joanne Thome of Wisconsin became pen pals about 73 years ago. Reicks, who has ovarian cancer, was surprised with a visit from Thome on last week in Grand Island.

'Remember where you are from': Deploying Nebraska soldiers offered words of support during sendoff

“I’m not really nervous, more excited,” Capt. Jared Baker of Lincoln said. “We have a good group of soldiers, with good support staff and leadership around us. With that, and the motivation of the soldiers, it makes leading this company very easy.”

Plattsmouth veterans Kermit Reisdorph and Mike Pauly with the cremated remains of Benton Kinkead, a Civil War veteran who lived in Plattsmouth from 1876 until the 1910s. Kinkead’s ashes were discovered at a Seattle funeral home, where they had apparently been stored since his death in 1916.

A portrait of Cynthia and Benton Kinkead. Benton will be buried with full military honors next to his wife at Plattsmouth’s Oak Hill Cemetery on Oct. 30.

Cynthia Kinkead died of an apparent heart attack in 1910. Her husband Benton, a Civil War veteran, moved in with his daughter in Seattle soon after, and he died there Nov. 8, 1916.

Benton Kinkead (right) with his brother, Selwin (left), and their brothers-in-law, Doug Shinn (upper left) and Jake Honnold (lower right). Selwin was Benton’s partner in a house-painting business in Plattsmouth for several years.