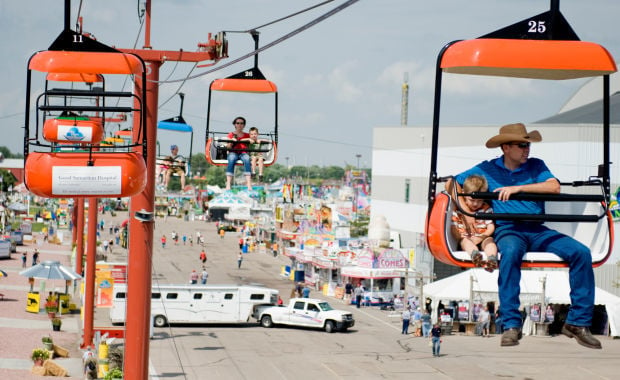 Fairgoers enjoy the view from the Sky Tram at the 2013 Nebraska State Fair in Grand Island, which drew 335,000 visitors. 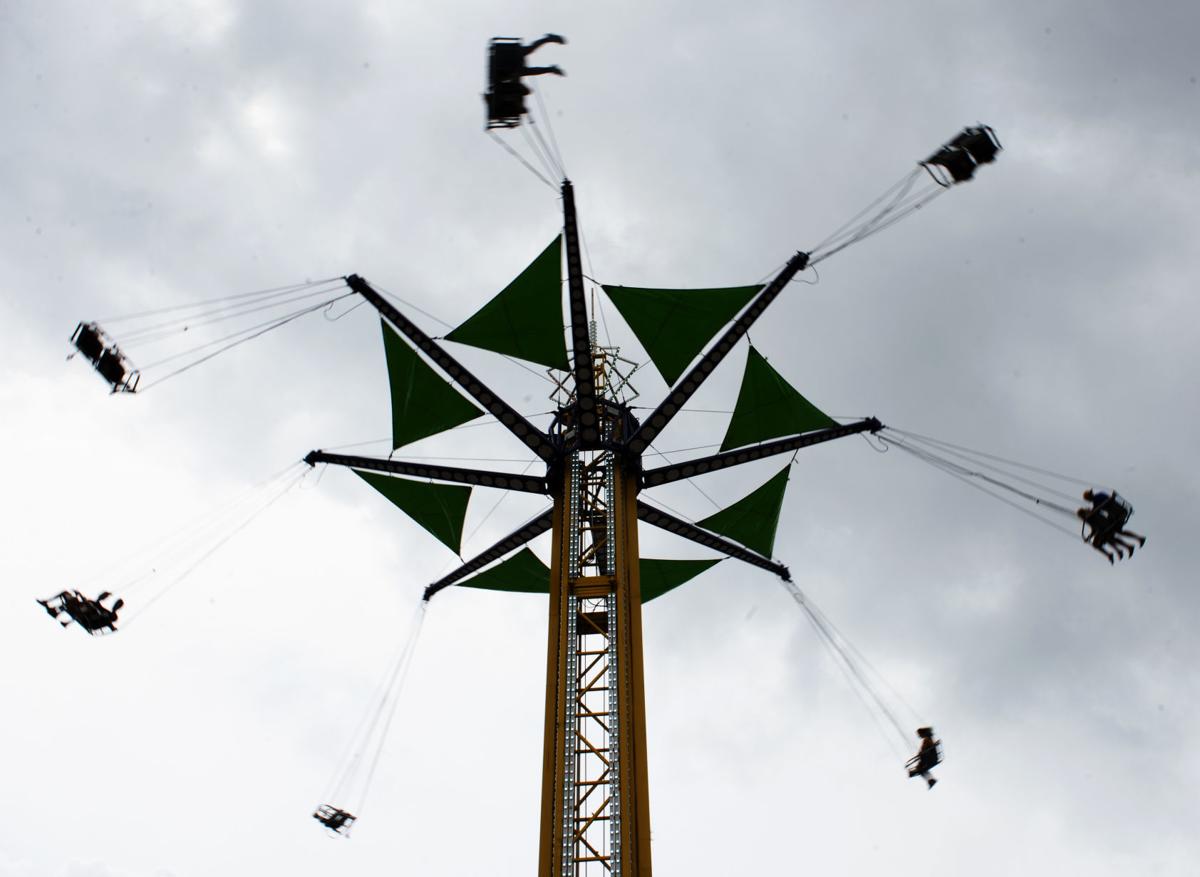 KEARNEY — Things were going to be different this time.

With $42 million in new, shiny facilities that someone else owned and a dependable revenue source in proceeds from the state lottery, the Nebraska State Fair was supposed to be on firm financial footing.

And for several years, that was true.

For each of the first eight years the fair was held at Fonner Park, it reported a six-figure profit.

But longtime employee Joe McDermott stepped aside as director at the end of 2017 and the fair hired Lori Cox as its new executive director. With the change came a flip in the fair's fortunes.

Cox blamed weather for the drop in attendance and pointed to positives that included a 16% increase in sponsorship revenue and more 4-H and FFA livestock entries.

Anticipation was high for the 2019 fair, which would be the organization's 150th.

Expecting high interest and large crowds, the fair signed 12 concert acts, up from seven in 2018. It also bundled several of those acts into "genre" ticket packages, hoping discounted prices would entice people to buy in advance and show up at the fair on multiple days.

But those plans were swamped, as heavy rains soaked the fairgrounds and left parking lots under water.

Not only did Mother Nature put a damper on attendance, she also forced the fair to spend $180,000 for shuttles to get people to and from the fairgrounds.

Attendance dropped 10%, gate revenue tumbled 12% and, combined with the huge increase in expenses, it made for a financial crisis.

The money issue came to a head in November, when then-Chief Financial Officer Patrick Kopke told the board that manages the fair that it had lost nearly $1.7 million and was on the brink of bankruptcy before shockingly submitting his resignation.

Cox and State Fair Board members insisted Kopke had exaggerated the financial problems and the fair would not go bankrupt. But it did have to make some serious cuts.

Last month, the fair laid off eight of its 17 full-time staff members, and took out a $1.1 million line of credit to help shore up its balance sheet.

As bad as those moves looked at the time, it appears they have put the fair back on solid footing.

At Friday's monthly board meeting, Cox laid out financial results from 2019.

However, Cox and her staff had planned for more revenue, so they spent a lot more money.

So how did the fair go from turning six-figure profits to a seven-figure loss in the span of two years?

For example, the fair spent $2.4 million on "professional services" last year, a category Cox said includes things such as security and ambulance services. That was a $1.1 million increase over 2018, and neither Cox nor anyone else can explain why.

Board members also realized the staff had grown too large. Board member Jeremy Jensen said after last month's meeting that the fair had been spending about $130,000 monthly on payroll, which was about twice the level of fairs of similar size.

Cox also said in an email earlier this month to fair superintendents that a new accounting service the fair hired "found much waste in every department," although she did not offer specifics.

"I take full responsibility that I did not force this issue with those I work with and for, and you have my word that it is now being corrected," she said in the email.

Cox said that concerts are a "financial burden that most fairs find tough to balance," but noted they generate "buzz" among fair patrons and the media.

State Fair presenting 12 concerts — the most in years

Cox said Friday that the entertainment budget, including concerts and other fair entertainment, has been slashed by $1.3 million for this year.

While the fair is tightening the reins on money it controls, it also is facing declining lottery proceeds.

It was suggested at Friday's meeting that fewer large Powerball and Mega Millions jackpots have likely slowed ticket sales. According to records, sales of tickets for Nebraska-specific lottery games, including Pick 5 and scratch tickets, grew from $173.8 million in 2017 to $192.2 million last year.

The fair board has officially stood by Cox, and her contract was renewed for another year. The contract does not require the board to publicly vote on renewal, but it does require 90 days' notice if Cox is to be terminated.

Sources told the Journal Star that several board members expressed a desire to let Cox go, but they didn't have enough votes.

Jensen declined to confirm whether any board members sought to have the deal terminated.

Former fair board members say they are appalled at what's happened over the past two years and say the buck stops with the executive director.

"It just amazes me what happened," said Jerry Fitzgerald of Gering, a former State Fair Board president.

Fitzgerald said a decline of 50,000 people attending the fair could cause a fairly significant loss, maybe a few hundred thousand dollars.

Tam Allan, who served on the board from 2004-2013, said the dramatic increase in fair expenses has coincided with Cox's tenure.

Allan knows that, because he filed a public-records request to get a look at the fair's budget.

"It was just really disappointing to see the levels of expenditures, especially the dramatic increase in personnel," said Allan, a Lincoln-based real estate developer.

When plans were formulated in the late 2000s to move the fair from Lincoln, it was Allan who was tasked with leading the effort, and he said the model the state came up with was one that limited expenses.

Rather than owning the buildings, the fair pays a nominal annual rent to Fonner Park to use them for two months each year.

As devised, the plan would allow the fair to employ fewer people. In addition to McDermott, the fair had a full-time staff of eight when it moved to Grand Island.

While there was some increase in the number of employees under McDermott, Allan said it's exploded under Cox, who added about a half-dozen employees.

Despite the criticism, officials are backing Cox's plans to help turn the fair around.

State Sen. Steve Halloran of Hastings, chairman of the Legislature's Agriculture Committee, was concerned enough after hearing media reports about the fair's problems that he asked for a meeting with fair board chairman Chris Kircher of Omaha.

Halloran and Kircher met for several hours Dec. 27, and though the senator declined an interview request, he did send an editorial to the Journal Star and other media outlets in which he said he was, "very confident in the financial stability of the fair and direction the board is taking the fair for the future."

He lauded what he called an "an extremely conservative budget that factors in the prospect of five days of loss due to weather and other adverse factors, but also provides the funding necessary to deliver the type of high-caliber event that Nebraskans have come to expect."

Kircher and Cox are scheduled to brief the Agriculture Committee in Lincoln on Feb. 18.

"I am confident that the board will demonstrate the leadership needed to keep the fair healthy and growing,” he said in an emailed statement.

Perhaps even more important is that the banks lending money to the fair have confidence in Cox and the board.

Kircher said the fair board met with about a half-dozen bankers Thursday in Grand Island and were able to allay any fears they had.

Jensen said he believes Cox has been unfairly criticized, and many of the problems have been beyond her control.

Jensen, a Grand Island native and the city's former mayor, said there is no chance that the fair is going to shut down.

"This thing is now pointed back in the right direction," he said.

Midway on the last day

At the fun house

Waiting for a shirt

One of the wettest months on record in Grand Island left the Nebraska State Fair underwater — literally — for part of its 2019 run.

As more rain drenched fairgoers Saturday, the Nebraska State Fair's executive director said shuttles may be the only way in to check out vendo…

Avoca, in Cass County, holds the popular 'Quack-Off' every year.

DENVER — Growing up in a small rural community on Colorado's plains, Ian McBeth went to work as a ranch hand in neighboring Nebraska at 14 and…

Sunday's warm weather will be a distant memory by the time most people step outside Monday morning.

Tekamah institution riding off into the sunset

After 52 years of fitting locals, rock stars and rodeo queens in their boots and cowboy duds, the owners of Dick’s Western Store in downtown Tekamah have decided to retire and close the business.

Consumer confidence surged higher in Nebraska during January, according to the latest monthly survey from the Bureau of Business Research at t…

A board member says "There are vendors that have looked at the Nebraska State Fair as a 'golden goose,' and it's going to stop."

Beth Smith of Lincoln, who was elected chairwoman at last month's meeting, said in an email that the board has alerted "all appropriate state agencies," and they are coordinating any further investigation.

Board member Jeremy Jensen said he was aware of two attempts over the past week to get fair director Lori Cox to resign.

The Nebraska State Fair on Wednesday announced that the daughter of Executive Director Lori Cox was killed in a car crash in Montana early Wednesday.

Fairgoers enjoy the view from the Sky Tram at the 2013 Nebraska State Fair in Grand Island, which drew 335,000 visitors. 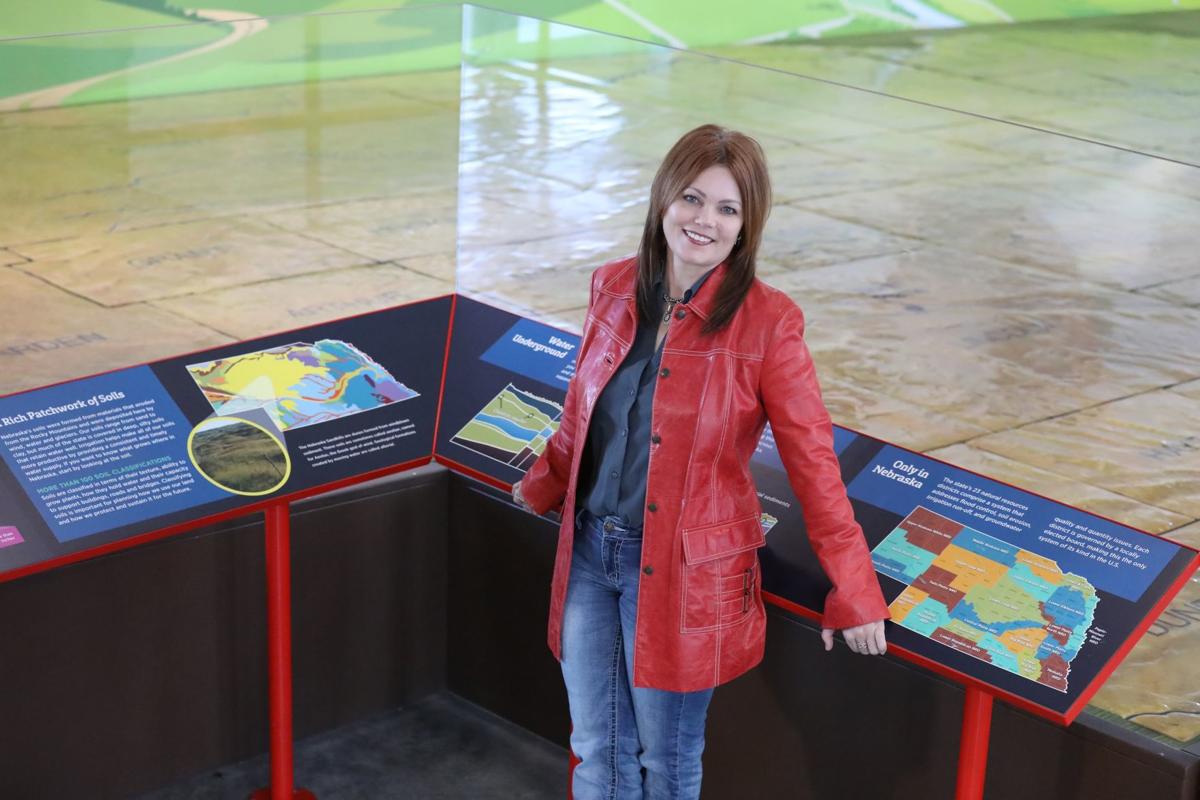 Lori Cox is the executive director of Nebraska State Fair.