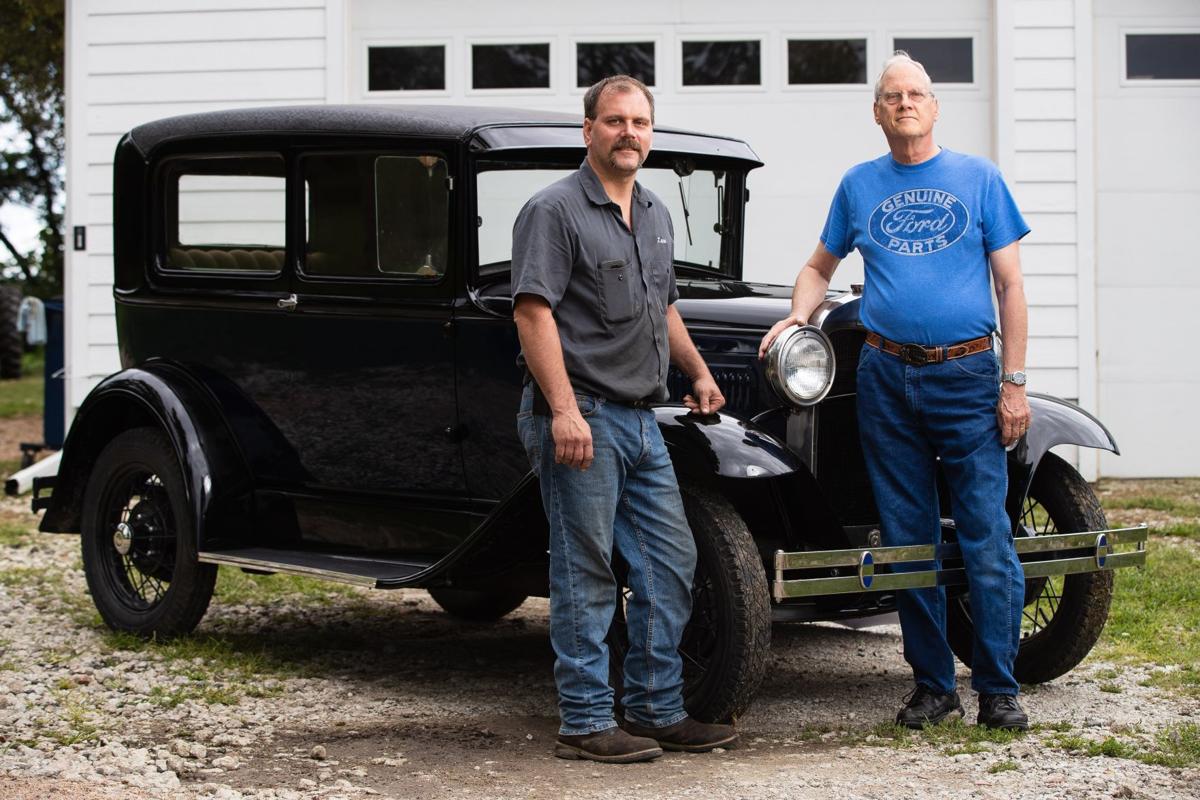 Lane Nelson (left) and his dad, Ron Nelson, pose with a refurbished Model A car in Wahoo. They are trying to get the state to allow them to license it so it can be driven on roads, but have run into a legal snag. 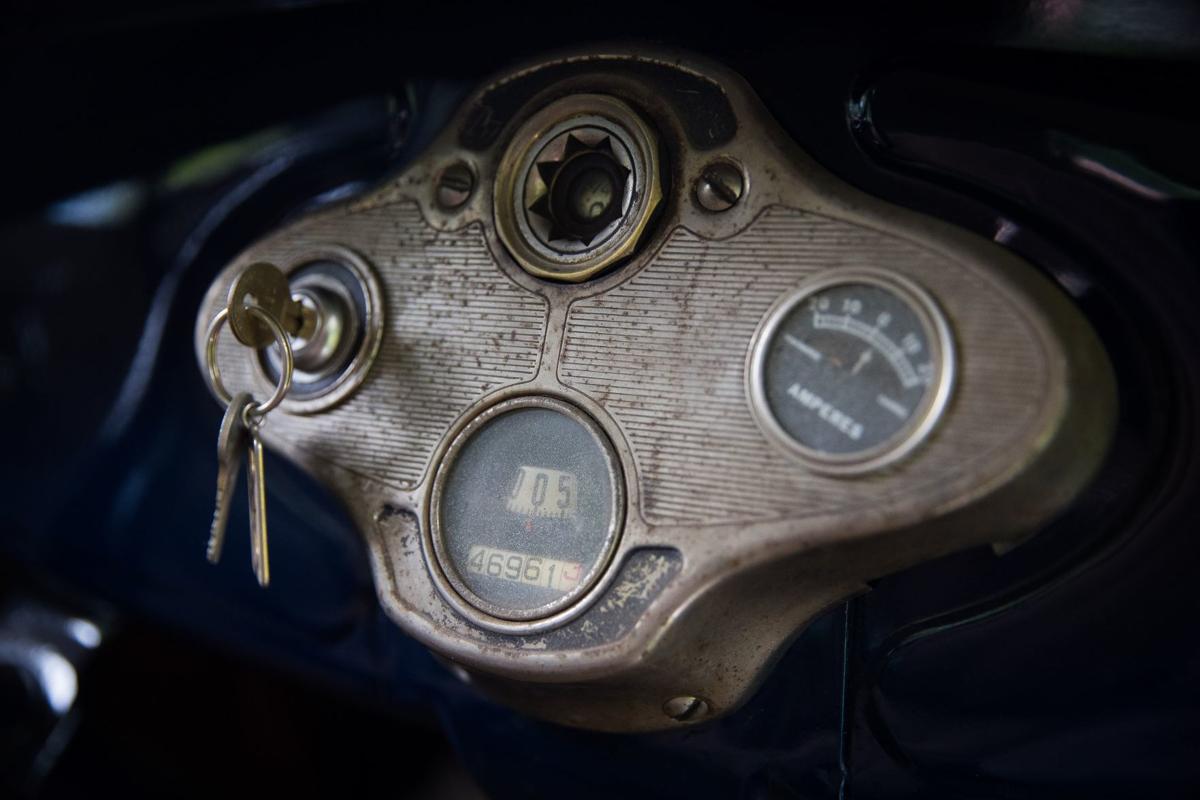 The dash of Ron Nelson's Model A car in Wahoo.

But instead, he's gotten an unsuccessful trip through state bureaucracy, even after taking his case to the state's top official, Gov. Pete Ricketts.

Nelson hasn't yet given up, and is now looking at getting state laws changed so that rebuilt cars can be legally driven.

But his months of work have turned up zippo so far.

"I'm not trying to run down anybody who's trying to help me, but this is completely ridiculous," Nelson said. "There's a disconnect somewhere."

You have to get under the hood of this old jalopy to understand why he can't license it.

State officials have told him that they'd be happy to provide a title if he'd just dismantle his car and combine it with parts of another Ford. That way he could get a title for a reassembled vehicle.

That is out of the question, said Nelson, who runs an auto repair shop outside of Wahoo, after investing hours of work and $1,500 to restore what is a family heirloom.

"I'm not destroying what was put together again so nicely," he said.

The car was purchased by Nelson's great-grandfather, Peter, in 1930 from Swanson's Ford in Ceresco.

After Peter Nelson died, the car sat idle for several years on the family farm. Eventually, Lane Nelson's father, Ron, turned 16, and he was offered a chance to put the car back on the road in 1963.

But because the car had not been licensed for years, a snag developed. Lane Nelson said that to get around it and avoid "a lot of paperwork," a state licensing clerk who knew the family suggested they obtain a "junk" title for the car. That, Nelson said, allowed his dad to obtain a license to drive it on the roads and highways.

But only a year later, his dad got in a fender bender, and the Model A was sidelined again. Then, a couple of years ago, Lane Nelson and his father started to restore the old Model A, mostly so his 72-year-old dad could take trips down memory lane with the grandkids and at parades.

After a lot of pounding, greasing and sweat, the old car was ready for the road again. But not for a license.

Lane Nelson said his father was told that because it had a "junk" title, it could not be licensed, it could only be dismantled and used for parts.

That's when Lane took over the chase for a good title. And he took it directly to Ricketts, who was in Wahoo in February for a town hall meeting.

Nelson hauled the old Model A to town on a trailer and parked it outside the event. "Governor Please Grant This Car Clemency" read the big sign Nelson affixed to the back of the car.

Ricketts, at the town hall meeting, didn't have an immediate answer for Nelson's "clemency" request, but referred him to a staff member, who contacted the State Department of Motor Vehicles. A DMV official called Nelson.

They didn't have good news. Once a vehicle has a "junk" title, that's all it can be used for, and it cannot be licensed and driven on public roads.

There's a safety and consumer protection purpose for such state laws. If a car gets so mangled that it cannot be safely repaired and driven, it shouldn't get a license, or be sold to someone else as a working vehicle.

But what about a car that's been repaired by people with some expertise, such as Nelson, who maintains that the car got a "junk" designation by mistake back in the '60s?

Sorry, said Ken Lackey, an attorney with the Nebraska Department of Motor Vehicles, state law is very specific — if a vehicle has "junk" status, it cannot be put back on the road.

Nelson said he also contacted the Nebraska Attorney General's Office and got the same answers.

So now he's reached out to two state senators in hopes of getting a state law amended so that rebuilt cars can be taken off the junk list.

Meanwhile, the old Ford is sitting again in a garage, gathering dust and waiting for clemency.

"I'm just one dummy in Saunders County. I don't know if they care very much about me," Nelson said. "I would hope that something could be done."

COLUMBUS — A flag belonging to VFW Post 3704 is believed to have been taken late Monday from an area near the bell tower at Pawnee Park.

COLUMBUS — Columbus residents are being urged to use filtered or bottled water if they provide infants with baby formula, given the excessive …

After years of matchmaking and a 16-month pregnancy, an Indian rhinoceros gave birth last week at the Henry Doorly Zoo and Aquarium in Omaha, …

History Nebraska posted this blog, relevant as the 100-year anniversary comes of this blight on Nebraska history:

Byron Burnham has a chance at a "lifetime dream" to have his 1975 Chevy Vega immortalized as a Hot Wheels Die-Cast car.

Lane Nelson (left) and his dad, Ron Nelson, pose with a refurbished Model A car in Wahoo. They are trying to get the state to allow them to license it so it can be driven on roads, but have run into a legal snag.

The dash of Ron Nelson's Model A car in Wahoo.