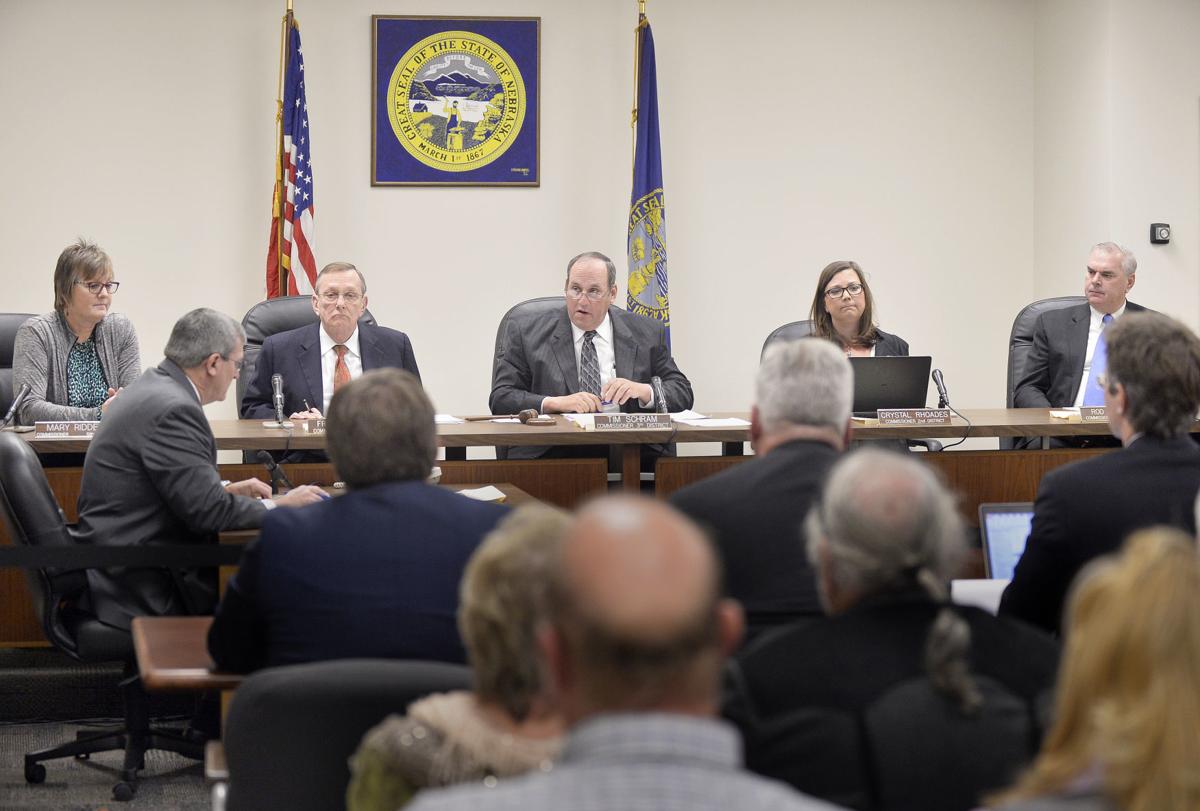 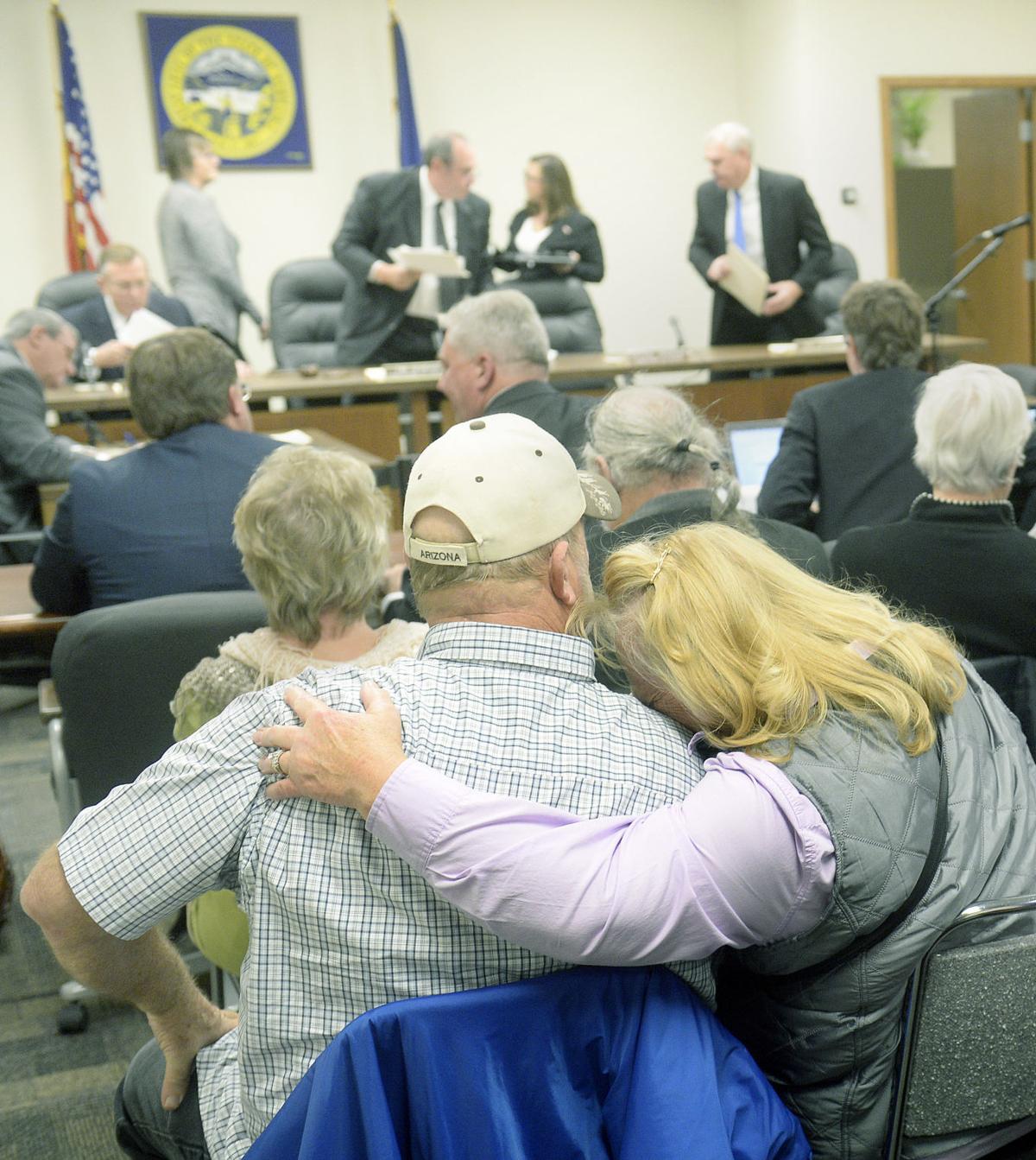 Diana Steskal rests her head on her husband Byron's shoulder after members of Nebraska's Public Service Commission voted to approve TransCanada's Keystone XL pipeline "mainline alternative" route through the state on Monday. The couple are landowners on the pipeline route near Atkinson. 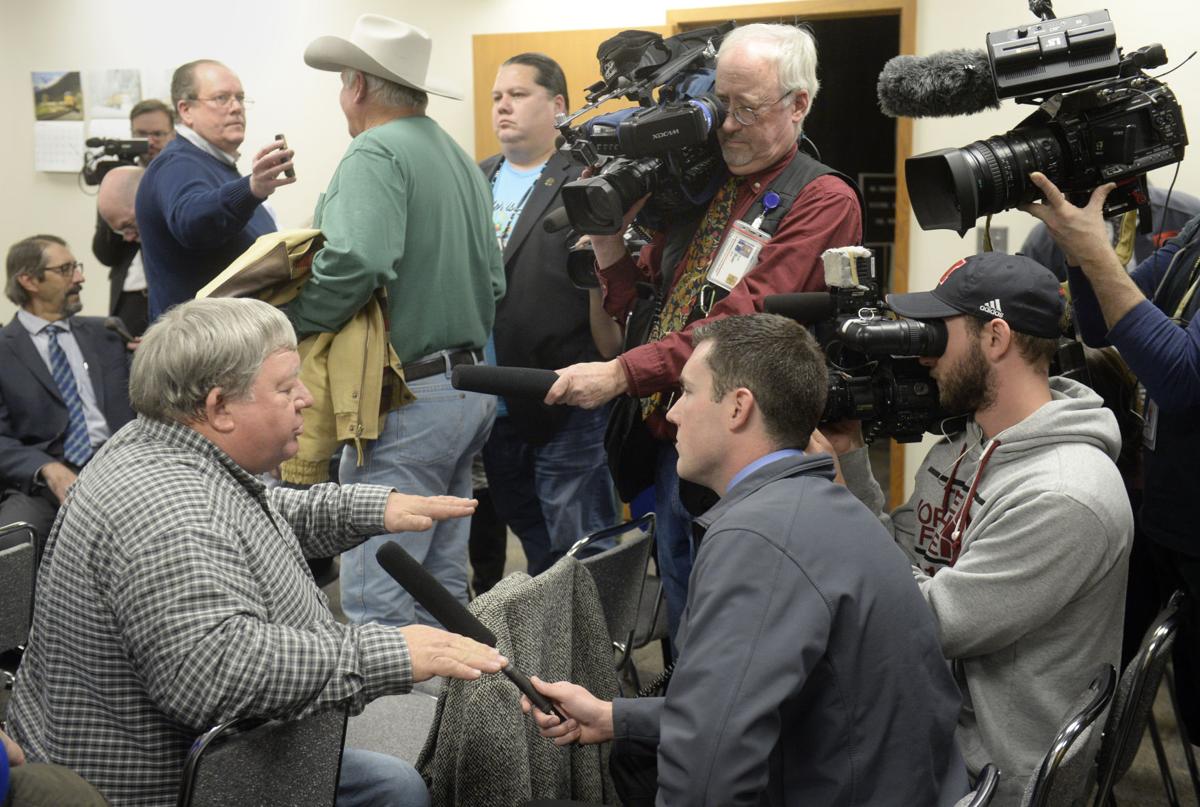 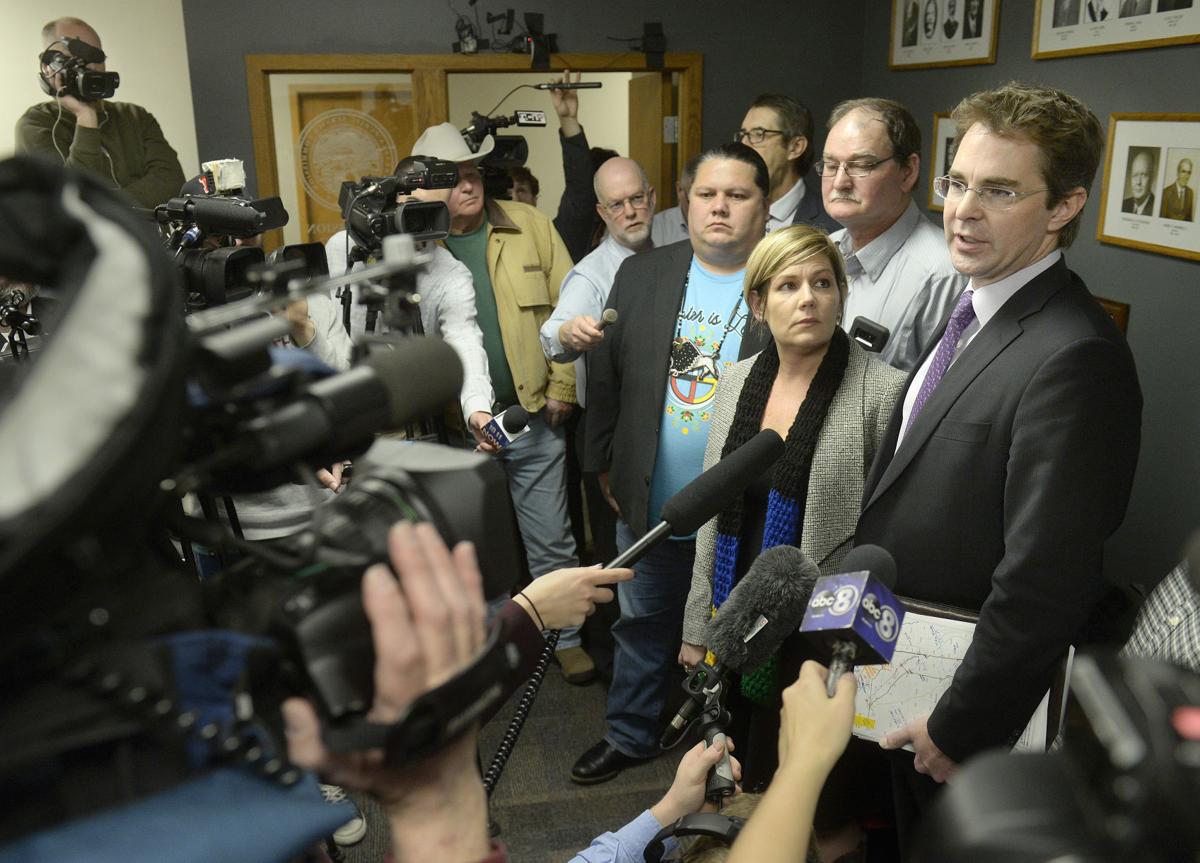 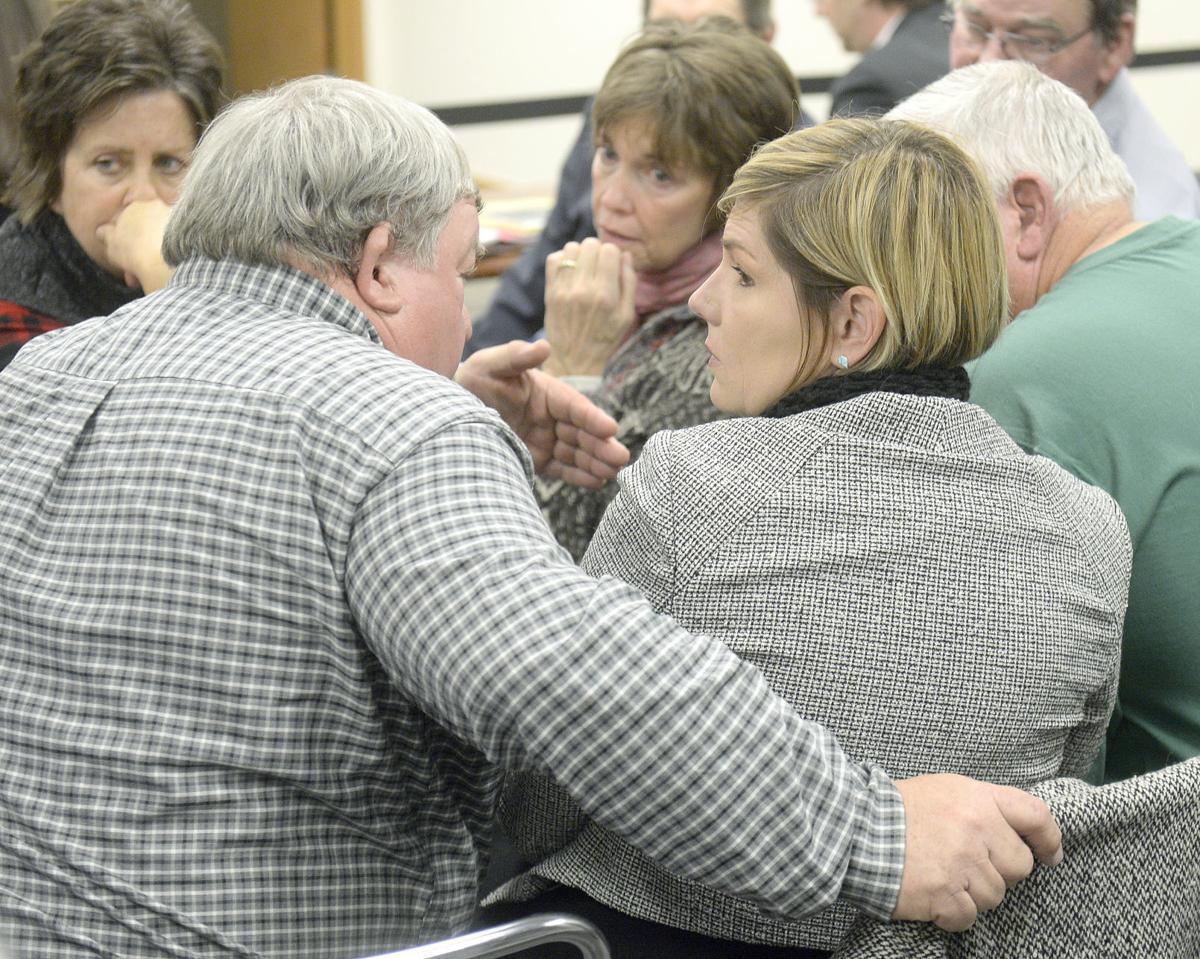 Nebraska regulators have approved TransCanada’s controversial Keystone XL pipeline, but not its preferred route through this state — raising questions about whether the company will continue to pursue the project.

Monday's decision by the Nebraska Public Service Commission, which came on a 3-2 vote, adds another twist to a debate that has made headlines for nearly a decade.

The commission — instead of signing off on TransCanada's 275-mile preferred route, which was the main focus of a court-style hearing in August — opted for a second, slightly longer route known as the "mainline alternative."

That route cuts further east then runs parallel with the existing Keystone pipeline for about 95 miles, with a 30-mile detour in Seward County.

It would impact about 40 new landowners, many of them in Madison and Seward counties, who aren't along the preferred route and don't have the original Keystone pipe cutting through their land already.

TransCanada didn't immediately say whether it will pursue Keystone XL construction along the alternate route. The commission's decision was met with stunned silence on the part of opponents and apparent confusion by TransCanada representatives.

"As a result of today's decision, we will conduct a careful review of the Public Service Commission's ruling while assessing how the decision would impact the cost and schedule of the project," said Russ Girling, the company's president and CEO, in a statement.

Attorney Brian Jorde of Omaha, who represents landowners who oppose the pipeline, compared the commission's move with a "choose your own adventure" book.

State Sen. Jim Smith of Papillion, who backs the pipeline and helped outline the process followed by the Public Service Commission, tweeted that Monday's decision "creates unnecessary uncertainty, too bad."

In dismissing TransCanada's preferred route, the commission majority said that option "fails to take advantage of any opportunity to co-locate" with the existing pipeline, "and therefore we are unable to conclude that the Preferred Route is in the public interest."

However, the mainline alternative route maximizes co-location with the original Keystone pipeline and is in the public interest, the commission wrote.

The alternative route diverts from the preferred route in Antelope County, then cuts through Madison County on its way into Stanton County. From there, it runs mostly parallel with the original Keystone pipeline — with a 30-mile detour around a wellhead protection area in Seward County — on its way to a pumping station in Steele City, along the Kansas state line.

It wasn't immediately clear if TransCanada has notified the 40 landowners who might now have a pipeline developer interested in their land.

Mike Flood, former speaker of the Legislature and a TransCanada backer, lives in Madison County and said he hopes the pipeline still gets built, citing its potential to contribute property tax revenue to counties along the route.

"I support the pipeline," Flood said.

Attorneys for pipeline opponents cautiously celebrated the rejection of the preferred route, promising to continue their fight but not revealing plans for their next step should TransCanada still desire to build.

Ken Winston of Lincoln, attorney for the Sierra Club, said the commission's move "opens up a whole new bag of issues."

Commissioner Crystal Rhoades of Omaha, who voted against the pipeline, said approving the mainline alternative instead of merely weighing in on TransCanada's preferred route raises due process questions, because many landowners along the alternate route weren't included in the commission proceedings.

Neligh-area farmer Art Tanderup's land would be impacted by either route. He said the mainline alternative still crosses fragile soils and the Ogallala Aquifer.

"What just happened is not protecting that resource," Tanderup told reporters after the decision.

Jane Kleeb, founder of the anti-pipeline group Bold Nebraska and chairwoman of the Nebraska Democratic Party, said the fight will go on: "We are resolute in stopping this pipeline."

Nebraska's approval was one of the final necessary steps before TransCanada could begin turning dirt on the 1,179-mile project, which would move Canadian oil sands from Hardisty, Alberta, to the U.S. Gulf Coast.

The Keystone XL appeared dead after former President Barack Obama stopped it in 2015, but the project received a jump start from President Donald Trump earlier this year.

Why approve the pipeline?

The commission majority summarized its reasons for approving the pipeline in its order:

"The Commission is very cognizant of the fact that opening a trench that entirely bisects the State of Nebraska from North to South to insert a 36-inch pipe will have impacts to the natural resources of the state, including soil, water, and wildlife," the majority wrote. "It is impossible to complete such a project without impacts.

"There is no utopian option where we reap the benefits of an infrastructure project without some effects. We are tasked with weighing those impacts against the potential benefits.

"We do not take lightly the concerns of the landowners, other Nebraskans, and our fellow Commissioners. We share many of the concerns expressed regarding the soils in Keya Paha, Holt, Boyd, and Antelope Counties.

"However, we also are very cognizant of the benefits to Nebraska, especially to the counties along the route. With economic concerns abounding, tax revenues from a project such as this can help ease burdened landowners, counties, school districts, and subdivisions by raising the potential of future property tax relief via expansion of the local tax base."

Commissioners also outlined why pipeline leaks — including last week's 210,000-gallon spill from a section of the original Keystone pipeline in South Dakota — could not be considered in their decision.

The Major Oil Pipeline Siting Act, adopted by the Nebraska Legislature in 2011, specifically prohibits the commission from considering pipeline safety, spills or leaks.

Opponents have argued that the Keystone XL should at least run adjacent to the original Keystone pipeline through Nebraska. That route cuts through Cedar, Wayne, Stanton, Platte, Colfax, Butler, Seward, Saline and Jefferson counties.

But TransCanada didn't include that option — also known as the "I-90" route — in its application. The company argues that Keya Paha County is the "fixed" entry point in northern Nebraska for the Keystone XL, because of a construction permit issued by South Dakota in 2010.

Commissioners dismissed the I-90 route for two reasons: deference to South Dakota's decision and because it wasn't part of TransCanada's application and therefore outside the commission's authority.

"While we understand that our primary focus is clearly the interests of Nebraska, we do not believe it to be in Nebraska's best interest to demand an approach that would result in direct conflict with our northern neighbor," the commission majority wrote.

Further, "The idea of the I-90 Route may sound good in theory, but we do not have the authority to approve it."

Chairman Tim Schram of Gretna said members of the Nebraska Public Service Commission won't immediately comment on their decision because of possible appeals. However, three commissioners issued separate written opinions: Rod Johnson, who concurred with the majority decision, and Mary Ridder and Crystal Rhoades, who dissented.

Over 100 protesters gathered Sunday afternoon to rally against the Keystone XL pipeline's proposed in-state route, ahead of a Monday announcem…

Discovery of a 210,000-gallon oil leak from the Keystone pipeline would seem to be poor timing four days before regulators in Nebraska decide …

If TransCanada still wants to build the Keystone XL pipeline on its newly approved route through Nebraska, the company might have to go throug…

Diana Steskal rests her head on her husband Byron's shoulder after members of Nebraska's Public Service Commission voted to approve TransCanada's Keystone XL pipeline "mainline alternative" route through the state on Monday. The couple are landowners on the pipeline route near Atkinson. 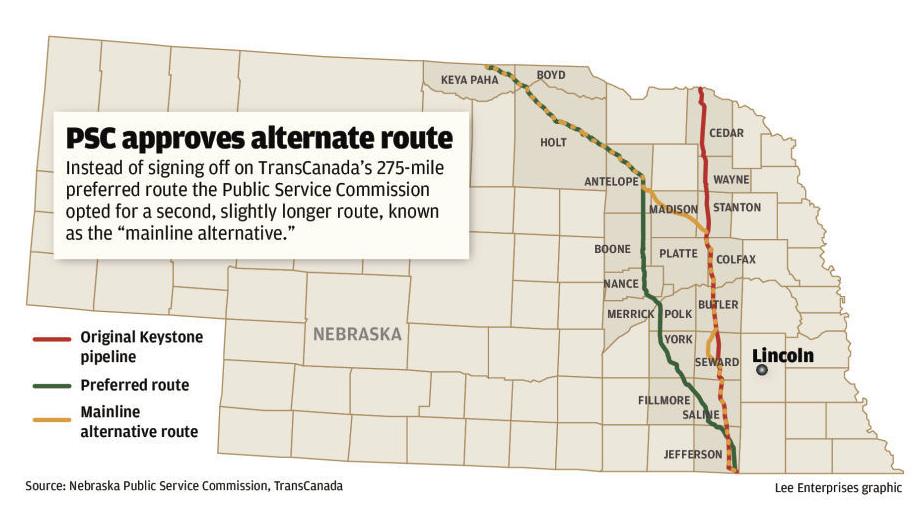 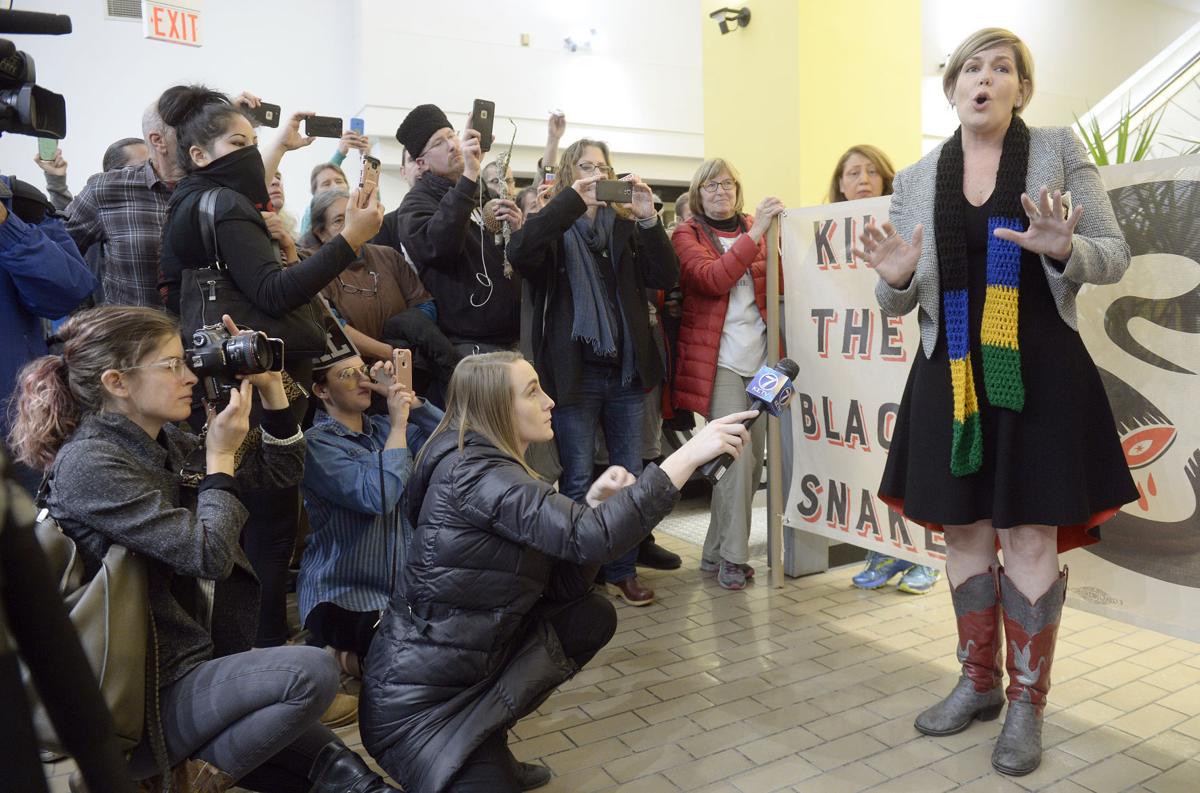