ALVO — Mead isn’t the only small town being imperiled environmentally by a noncompliant company in Nebraska.

Alvo, a tiny Cass County village with a cluster of homes and an abandoned main street, sits next to a mountain of scrap tires — 20 to 30 feet high and spanning an area larger than a football field.

The mound of rubber is much larger than what’s permitted by state environmental and fire regulations. That has spurred concerns that the highly flammable tires could, if they caught fire, result in an inextinguishable, toxic blaze that would force the evacuation of the village.

Some Alvo residents worry that the Nebraska Department of Environment and Energy has moved too slowly to make B-Rose Tire Recycling — whose owners cite mechanical problems as the reason for the build-up — clean up the site. Similar complaints have been made in Mead, where the now-shuttered AltEn ethanol plant improperly piled up contaminated waste seed despite multiple warnings from state regulators.

“I’ve been fighting this mess for several years,” said Dennis Tempelmeyer, a retiree who lives a couple of blocks from the sea of tires. “They’re going way too slow.”

Last month, after a yearlong series of warnings, the Department of Environment and Energy signed a consent order with the operators of the tire recycling business requiring that the site be brought into compliance with state regulations.

Carla Felix, a representative of the department, said that before the agency takes such an enforcement step, it must make “every effort” to obtain voluntary compliance. That meant first sending a warning letter a year ago to Beth Ann Rose, who operates B-Rose with her partner, Larry Langer, followed by notices of noncompliance in November and March.

Langer said the tire pile got out of control because of breakdowns in the facility’s tire shredder, which turns scrap tires picked up from service stations and repair shops into smaller pieces. He and Rose also claim that they’ve been targeted for complaints and harassment as part of a long-running feud over control of the village’s now-disbanded volunteer rescue squad.

“We’re just getting our feet underneath us,” Langer said Wednesday. “We’ll be in compliance with the state in a week or two weeks.”

The actions come as Nebraska lawmakers are scrutinizing whether state laws need to be changed to allow a faster response to environmental emergencies, such as the Mead ethanol plant and Alvo tire pile.

Felix said that in the past three months, B-Rose and Langer’s company, LAL Enterprises, have reduced the tire pile by about 32,500 “passenger tire equivalents” (PTE), which is how the agency measures the mix of auto, truck and tractor tires in the mounds of rubber.

That is an about-face for the tire recyclers, who failed to comply with past state requests to voluntarily reduce the pile. Last summer, it was more than twice as large, 323,228 PTE, as the 160,000 PTE permitted by the state.

Last month, the state environmental agency drew a legal line in the sand, reaching a consent order with Rose and Langer to reduce the tire pile from a recently estimated 306,000 PTE to 240,000 PTE by July 1 and 160,000 PTE by Sept. 1. Such an order, if not followed, typically leads to legal action.

The Nebraska State Fire Marshal Agency also struck an agreement with the tire recyclers. By the end of June, the site should comply with state fire regulations that restrict old tire piles to 20 feet high and 50-feet-by-250 feet, with lanes between the piles and at the yard’s boundaries for firetrucks.

Scrap tires, according to Regina Shields, legal counsel for the Fire Marshal Agency, are especially problematic. If they catch fire, such fires spread quickly, are hard to extinguish and cast a toxic cloud of smoke, she said. Residents of Alvo have expressed concern that they would be forced to evacuate if the pile started to burn.

Amid all this, Rose and Langer’s state permits to pick up scrap tires from repair shops and service stations were renewed in March, despite their past noncompliance.

Felix, the Department of Environment and Energy spokeswoman, said rescinding the permits would have left the recyclers unable to haul away the scrap tires, leaving the state to clean up the mess. She said renewal of their permits in 2022 will include a prerequisite — that their excess tires are gone by Sept. 1.

Langer said Wednesday that the business is now hauling away 7,000 PTEs a day. That would be a five-fold increase from last month, when the recyclers reported hauling about 1,400 PTEs a day.

But one Alvo resident, who lives a block from the muddy scrap yard, isn’t confident that the mountain of tires will continue shrinking given the business’ lack of response to past complaints.

“My main thing is, why does he think he’s above the law?” asked Brandon Badberg.

The tire turmoil is the latest controversy to hit Alvo, a village of 130 people with a mix of gravel and blacktop streets that sits about 15 miles east of Lincoln, just south of the Greenwood interchange on Interstate 80.

The community, surrounded by farm fields, has no volunteer rescue squad and relies on responders from Eagle, about 7 miles away. The Alvo Village Board voted in 2019 to fire four members of the squad, which sparked a lawsuit by those rescue squad members claiming that the village had no jurisdiction over the rescue unit. A trial is set for this fall.

Langer, who was elected to the Village Board last fall, is part of the faction that supports the rescue personnel. He claims that’s why the recycling business has been the subject of complaints.

But an inspection by the Cass County Sheriff’s Office confirmed that there was an apartment at the scrap yard, County Election Commissioner Linn Moore said, adding that any dispute about zoning must be pursued by the village.

But that became more difficult after the recent firing of the village attorney, who enforces local ordinances, by the Village Board. Langer was among those who supported the firing.

Even before all this, Alvo made the news in 2018, when then-Village Clerk Ginger Neuhart pleaded guilty to embezzling $105,000 from the village. Then, a year ago, a state audit prompted criminal charges against the fire chief, accusing him of using $18,000 in Fire Department funds for his mortgage and other personal expenses.

Village Board Chairwoman Robin LaPage declined to comment about the recent scrap tire controversy, but she was among the board members who voted to fire the rescue squad members.

Tire recycling is a highly regulated activity because of the potential for toxic fires and because tires can provide a breeding ground for mosquitoes. Only two outlets in the state, landfills in Butler and Dakota counties, will take chopped-up tires.

Haulers of recycled tires must obtain a state permit, and recycling facilities must carry “financial assurance” equal to $1.25 per passenger tire equivalent to pay for the cleanup if a business fails.

Rose and Langer initially got in trouble with state regulators in May 2020, when the Department of Environment and Energy sent a “warning letter” saying they had financial assurance for 96,000 PTEs, but were storing more than twice that number, 239,000 PTEs, at the end of 2019. They blamed “mechanical issues” with their shredder for the excess.

“This is an attempt to obtain compliance voluntarily,” the warning letter said.

What followed was a yearlong exchange of messages, according to state records, to get the yard into compliance. In between, Rose and Langer increased their financial assurance to a combined $200,000, which allowed them to hold up to 160,000 PTE.

That was despite an assurance from B-Rose to state regulators in January that the tires would be “gone ASAP.”

On Monday, piles of tires stretched as far as the eye could see in the muddy B-Rose Recycling yard. A lone crane operator loaded tires into a shredding machine.

When the local state senator, Robert Clements of Elmwood, was asked about the situation, he said the deadlines set to clean up the yard were “reasonable,” though he wished that the tire pile would be brought in compliance much sooner.

Tempelmeyer, one of the Alvo residents who has complained about the mountainous tire pile, said he’s noticed extra shredding activity at the recycling yard recently but questions whether that will actually reduce the pile if the business keeps hauling in more tires.

He said Langer’s complaints that he’s a victim of a town feud over the defunct rescue squad are just a smokescreen.

“It’s like the ‘Wizard of Oz,’” Tempelmeyer said. “Pay no attention to the man behind the curtain.”

Mead's Board of Trustees stripped AltEn of its permit to manufacture ethanol, but will allow the company to continue working with seed company giants Bayer, Corteva and Syngenta to cleanup pesticide contamination at the site.

Since Legislative Bill 650 was passed last month, multiple companies have announced plans to contract with Nebraska ethanol producers to capture their carbon dioxide before it enters the atmosphere.

Lincoln saves about $2M on recycling

A few years ago, the city decided to buy one size bin, reduce the number of sites and install surveillance to reduce illegal dumping, she said.

Nebraska senator makes another run at answers on AltEn

Sen. Carol Blood asked about the cleanup process, liability issues, history of the site, and seeks reassurances that information about AltEn will be made public.

Once clear and teeming with life, the pond is now murky and stained by chemicals — a victim of what happened at the far end of its 6,000-acre watershed.

Alvo scrap yard shrinks mountain of tires, but still not in compliance

The business has yet to comply with an agreement to provide fire lanes between tire piles and exterior fences.

An inspection report concluded that B-Rose Tire Recycling of Alvo had made "obvious visual progress" and had come into compliance with a Sept. 1 deadline to reduce its scrap tire inventory. 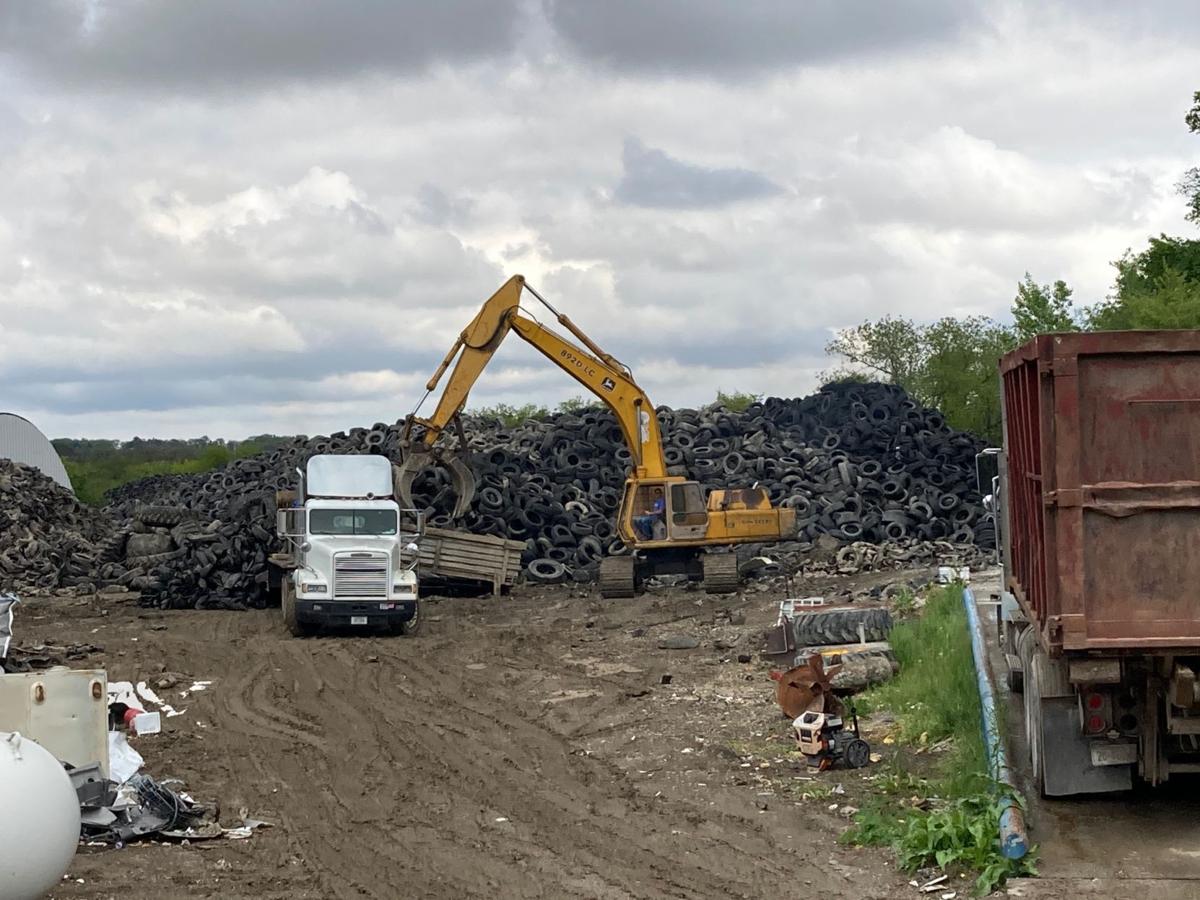 The mountain of tires at B-Rose Tire Recycling in Alvo is 20 to 30 feet high and takes up an area larger than a football field. It’s much larger than what’s allowed by state environmental and fire regulations. 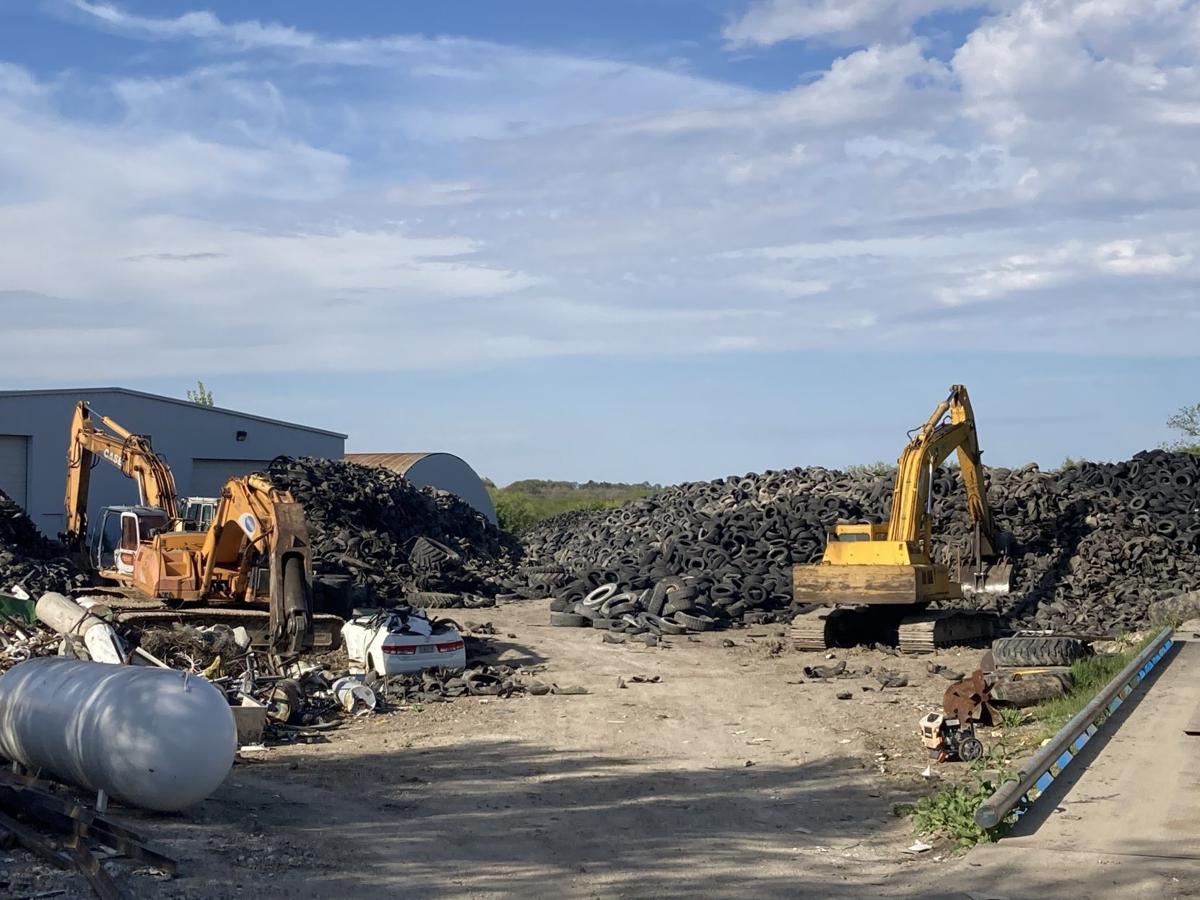 A state inspection in February found that the massive tire pile in Alvo held the equivalent of about 306,000 passenger tires.