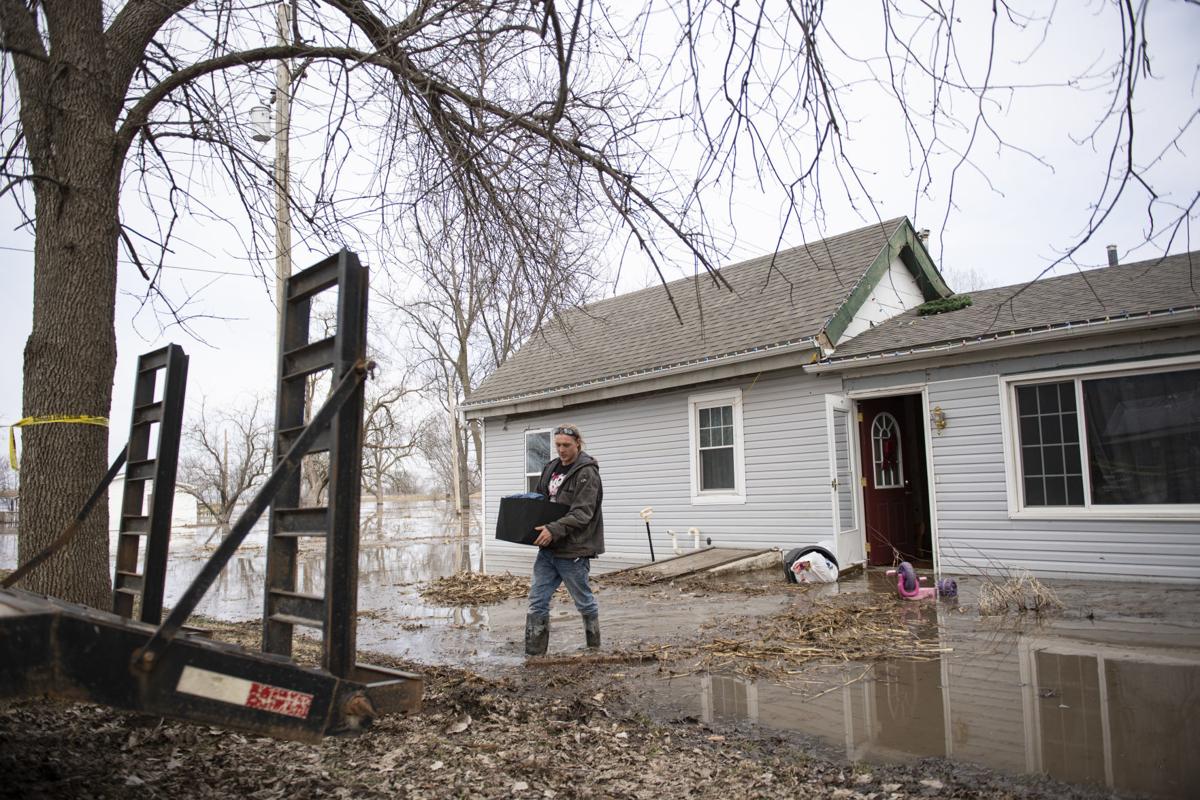 Kody Smith helps moves clothes out of a flooded home Sunday in Peru. 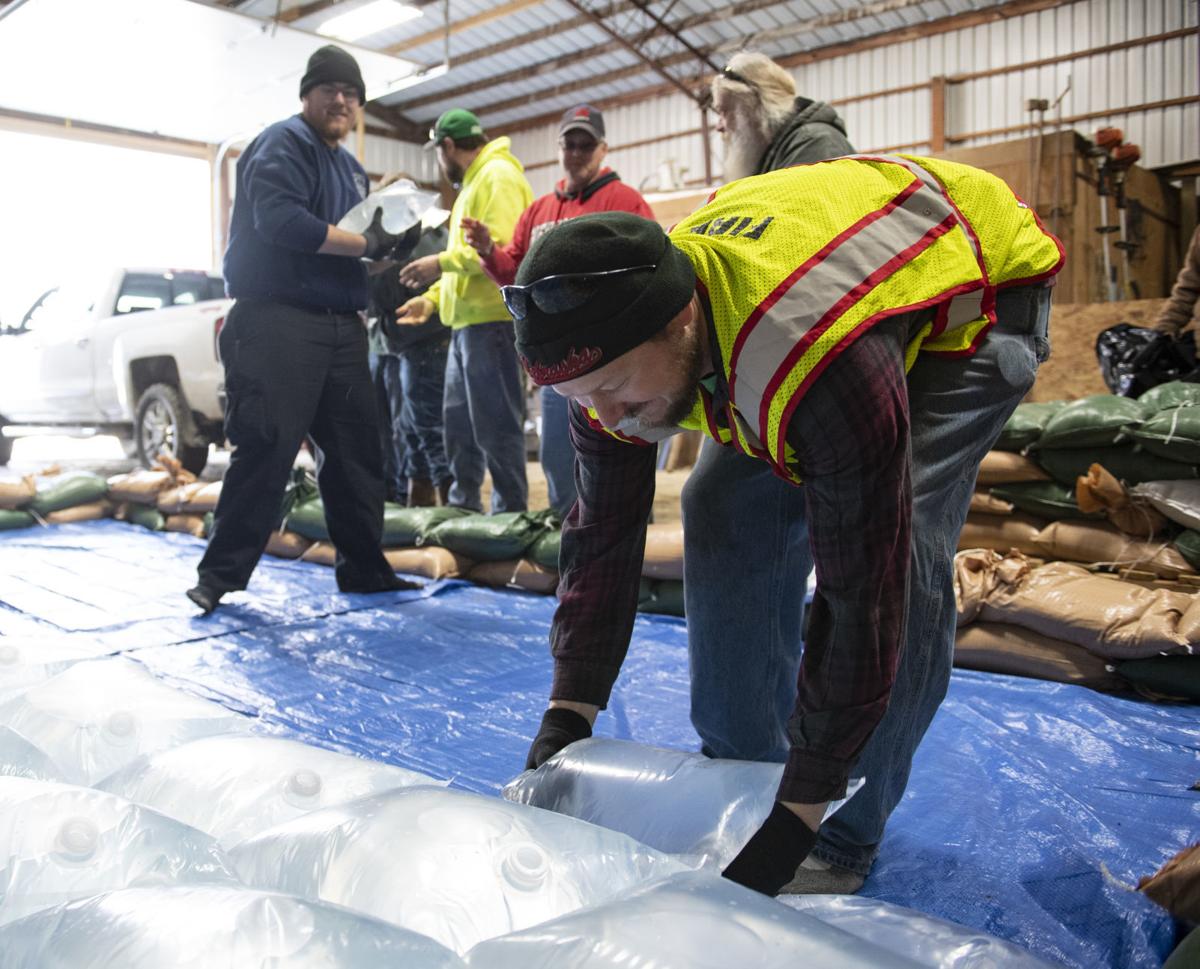 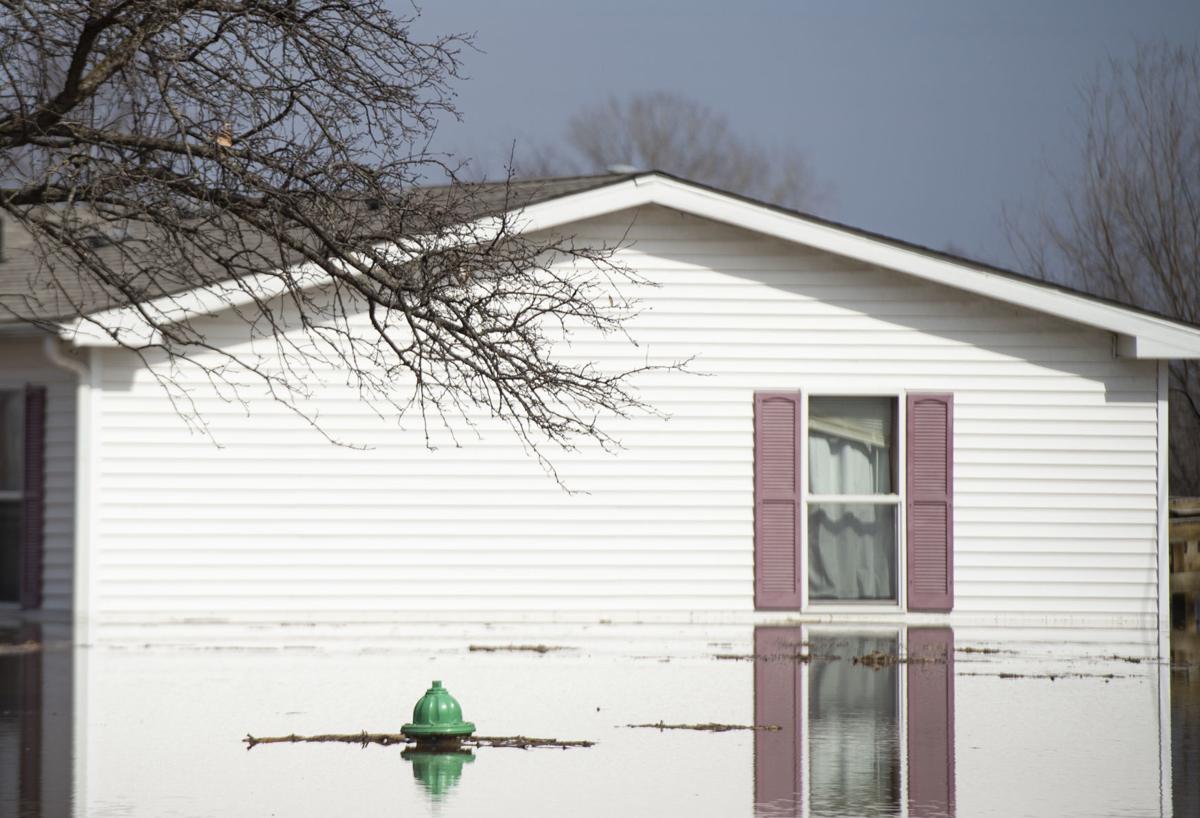 The top of a fire hydrant peeks out of the water Sunday, March 17, in Peru.

PERU — More than 100 residents packed into the Peru City Hall building on Fifth Street on Sunday afternoon, just about all of them asking local officials the same question: How, and when, are we going to get clean water?

The small town of just under 1,000 was one of dozens in the region scrambling to find a clean and reliable source of water on Sunday as major flooding moved further into Southeast Nebraska.

The city's water supply had remained safe until Saturday afternoon, when the levee that separates the town from the Missouri River was breached. Two hours later, floodwaters began to overtake low-lying areas and by Sunday afternoon several homes were inundated with several feet of water.

And even though some parts of town remain untouched by the floodwaters, its water system has been compromised.

"We have the (water) tower and that's what we have," said Crister. "We need to be conserving water and everyone's been doing a good job."

In response, town leaders have urged residents to conserve water as best they can. Meanwhile, volunteers and local firefighters worked Sunday with individuals from the neighboring town of Auburn to bring in water.

"Auburn firefighters have stepped in to help us," said Assistant Fire Chief Luke Winkelman. "I know it's mass chaos right now, but we're trying to get things set up."

Throughout the day Sunday, firefighters and volunteers from both Auburn and Peru brought in hundreds of gallons of water in "water bladders" that held between one to two-and-a-half gallons each.

The plan is for Winkelman and other volunteers to deliver water to residents who are unable to pick it up themselves, and to the dozens of residents who have been displaced.

"Everybody that's been affected fortunately has a place to go," said Peru firefighter Robert Dean.

Along with residents being affected, Peru State College has suspended school until further notice and sent its nearly 2,500 students home.

And even after the town's meeting on Sunday, there are still more questions than answers. When will the floodwaters recede? How long until the town's water system gets fixed? When will classes resume? All unknown.

Still, despite the hardships that have fallen on not only Peru, but dozens of cities across the state, the response has been tremendous, Crister said.

"It's been fabulous to see so many volunteers and people willing to help out," she said. "It's that 'small-town USA mentality.' It's what it's all about."

Speaking on a conference call Sunday afternoon, Gov. Pete Ricketts praised the efforts of emergency personnel and other Nebraskans who have st…

Only hours after asking residents to voluntarily cut back on water use, city officials late Sunday said a reduction is now mandatory for Linco…

From their offices in Lincoln early Thursday, hydrologists with the U.S. Geological Survey were monitoring the final few moments of a stream g…

The story behind that Bellwood couple's viral flood photo

BELLWOOD — Sitting aboard a jon boat Thursday near his wife and clutching their 16-year-old cocker spaniel, Ollie, Craig Sorensen was in a sta…

Historic flooding is causing huge headaches for both freight and passenger railroads in Nebraska and surrounding states.

Students in Lincoln eating off disposable dishes to curtail water use

Students at Lincoln Public Schools, Southeast Community College and those remaining on the University of Nebraska-Lincoln campus during spring…

Sirens blast near Cooper Nuclear Station; officials say it was a false alarm

The Nebraska Public Power District said sirens that sounded Tuesday morning in the vicinity of the Cooper Nuclear Station were a false alarm.

Kody Smith helps moves clothes out of a flooded home Sunday in Peru.

The top of a fire hydrant peeks out of the water Sunday, March 17, in Peru.