NEBRASKA CITY — If Ted Beilman had wanted to, the first time he swung open the doors to the Veterans Memorial Building, he could have written his name in the layer of dust caked upon the auditorium floor.

Instead, he sought a reason to clean the place up and display its potential value to the community.

The building first opened as a center for war veterans with a four-day ceremony that began on Nov. 11, 1929. It was a joint effort by local leaders and the American Legion, and the front of the program read, “Offering the world another great idea: ‘Work Together!’”

Celebrated by upward of 3,000 people, including Gov. Arthur Weaver, the town centerpiece at 810 First Corso soon became a hub of all kinds of social activity in Nebraska City, which took ownership of the building in 1943.

On rainy days, Beilman and his buddies headed into the unlocked Memorial Building and played hoops on the now-creaky auditorium floor.

Now retired, Beilman first moved away from Nebraska City when he was 13, and after college he ended up in Alaska, working for the state legislature as a committee aid, as well as for Princess Cruises. (“And that was a lot more fun,” he said, laughing.)

He and his wife, Gloria Glover, moved back to Nebraska City full-time in 2014 after traveling to-and-from Alaska to help care for his mom during her final years. In doing so, he rediscovered his hometown and found that his childhood haven was in a state of disrepair.

The city-owned building has been closed for about a decade. There’s major roof work required on the east side of the building — a rainy day now floods some of the rooms inside. But the auditorium, save for a few droopy roof tiles, held its charm, Beilman said, even under the cover of dust.

On Saturday, the doors will open to the general public for the first time in recent memory as part of the city’s salute to Veterans Day.

At 11 a.m., a massive mural painted by Kent Schwartz will be dedicated in the nearby Memorial Way. Then until 6 p.m. Saturday and from 10 a.m. to 6 p.m. Sunday, visitors can explore the collection of stories, photos, uniforms and quilts compiled by a group of volunteers who reinvigorated the long-dormant Memorial Building auditorium.

Beilman said he wanted to showcase it, and proposed the idea of collecting veterans’ stories as one potential Nebraska City offering as a committee planned out events and celebrations tied to the state’s sesquicentennial.

Amy Allgood, executive director of the Nebraska City Tourism and Commerce, said the agency provided a little financial support and offered to help Beilman spread the word about his effort to collect veterans’ stories.

When he first said he wanted to collect 150 of them, Allgood remembered thinking, “Are you joking me?”

The final collection of stories includes histories of more than 800 of the county’s veterans.

“Moved to tears,” Allgood said when asked her reaction upon walking into the auditorium. “Because I was in there nine months ago and it was a filthy old gym deteriorating. You walk in today and it’s amazing. Then you start walking around and reading these stories, it’s so moving.”

Many of the displays started with a scavenger hunt of sorts led by Beilman, who culled information about veterans from dozens of gravesites, volumes of books, heaps of newspaper clippings and, in one case, a typed thank-you note signed by President Ford found in the back of a World War I vet’s photo that had been bound for the trash.

Beilman said it couldn’t have been completed without a group of volunteers that got the auditorium presentable and filled it with tributes to veterans. Middle-schoolers helped sweep up the dust from the court. The Blue Star Mothers of Nebraska City not only collected names and stories of veterans for the display boards, but also knitted 18 Quilts of Valor that are draped upon peg boards that Beilman fished out of a nearby dumpster.

On Thursday, as some of the volunteers perused the near-final project, Beilman led a brief tour of some of the displays.

He stopped at the display of William Hayward, a Nebraska City-born Army colonel for whom the nearby elementary school is named. Hayward led the 369th U.S. Infantry Regiment, an all-black unit that came to be known as the Harlem Hellfighters, who fought along with the French army against German troops through much of 1918. Beilman found some of the photos on the display in a book he found for sale online at a Boston bookstore.

“So I tracked that down, and it told the story of the 369th U.S. Regiment, talked about Col. William Hayward and how they organized the regiment, how they recruited, how they trained, and then they went over to France,” he said.

Then he moved on to a smaller display: “And here’s the one I found in the garbage heap.”

Beilman said he found the framed photo of Willard Stong, a World War I vet, as an estate sale was concluding. It was among the unsold items, in a pile. He picked it up, flipped it over and discovered a letter from Ford congratulating the man for his service.

He bought it for a dollar, and spent hours looking into Stong’s past. Beilman learned that Stong was married, but had no children and served as the postmaster of Syracuse during his post-military career, dying in 1975.

“I could hardly get any information, but I found his grave marker in Syracuse,” Beilman said. “It’s pretty emotional to think, you know, that guy was in the uniform in World War I, and to find his photo and this letter on the back of that photo in a pile of trash that was getting ready to be thrown out. I rescued it and did some research, and this is what I was able to find. And then to find his grave out at the Syracuse cemetery.

"This display is an attempt to remember this gentleman. Otherwise, he’s forgotten.”

Many veterans or descendants provided information for the effort after Beilman began visiting VFW halls and Rotary meetings and the like in search of their stories.

The contributions include the story of Duane Smith, 81, who ran ground radio communications at Wheelus Field in Libya in the mid-1950s at the outset of a 20-year Air Force career.

“I could’ve done more,” Smith said as he looked at the board featuring his accomplishments, next to the two displays of his grandsons who both enlisted in the Air Force.

Each stood upon an easel that Smith fashioned from bundles of 96-inch-long 1-by-2s he bought at Mead Lumber. His wife, Jackie, helped paint them black.

“If you need any pieces of 1-by-2s that are 2-feet long, I’ve got a couple hundred of them at home,” Smith said.

He said he started volunteering to help with the Veterans Day display more than a few months back, after hearing Beilman talk about the idea and the need for easels.

“It started out at 50,” Smith said. “Then a little later, he said, ‘I think I’m gonna need a hundred.’ I said, oh my gosh. And so we made a hundred of them, got ‘em painted, got ‘em assembled in here and then yesterday afternoon, he said, ‘I’d like to have another 10.’”

Beilman said his goal is to revive the Memorial Building, a place where longtime Nebraska City residents have all kinds of memories.

“It was a building in town where everyone would come together,” Beilman said. “It was a truly community building.”

David and Connie Sackles went to their senior prom together there in 1965 — she’s pretty sure that wasn’t the “Midnight in Paris”-themed one. Gary Strange remembered the auditorium's hardwood floor and the balcony filled for a pro wrestling match featuring the American Wrestling Association’s owner and longtime top fighter, Verne Gagne, who headed over to the still-open Dinty Moore’s Lunch Room to slam some beers after signing autographs for adoring fans.

“This place was used a lot, for all kinds of things,” Strange, 75 and a retired Army colonel, said.

Beilman created a 17-minute documentary about the building, his first YouTube posting. “My wife calls it Ken Burns in fifth grade,” he joked.

And last year, he shepherded the Memorial Building through the process of being listed on National Register of Historic Places.

Once the weekend’s celebration concludes, Beilman will lock the doors on the Memorial Building, and they’ll remain locked for the foreseeable future.

Along with his YouTube video, first National Register application and first all-volunteer honor project, Beilman also created his first nonprofit, the Nebraska City Veterans Memorial Building Project. The goal is to raise the $4 million needed to repair and upgrade the city centerpiece and reopen it to serve as a performing arts center, a culinary incubator and a meeting space for veteran groups, among its many possibilities. He said he's received confirmation from Omaha architectural firm Leo A Daly, which has performed several on-site visits, that the historic building remains structurally sound.

“Because of the building, I’m learning all this,” Beilman said. “I probably wouldn’t be doing it any other time. Then again, I’m retired. I spent 45 years of my life working to make a living, and now I’m working to make a difference for my community. And that’s what I want to try and do. This Veterans Memorial Building can be a key part of Nebraska City.”

To learn more, go to the nonprofit’s Facebook page — facebook.com/Nebraska-City-Veterans-Memorial-Building-Project-1437961759564082. Or head to Nebraska City this weekend. The first 150 through the door each morning get a free American flag.

“I didn’t know what the reaction would be from folks,” Beilman said. “I just had no idea. But it’s been a pretty rewarding experience. Soldiers sacrificed a lot. Rain or shine, we’re gonna have a dedication. That’s how it is.”

See what kind of community veterans have in Lincoln and the support and camaraderie they find there.

Lawsuit filed over construction of National Cemetery near Omaha

A $1.25 million lawsuit has been filed in U.S. District Court in Omaha over the construction of the Omaha National Cemetery. 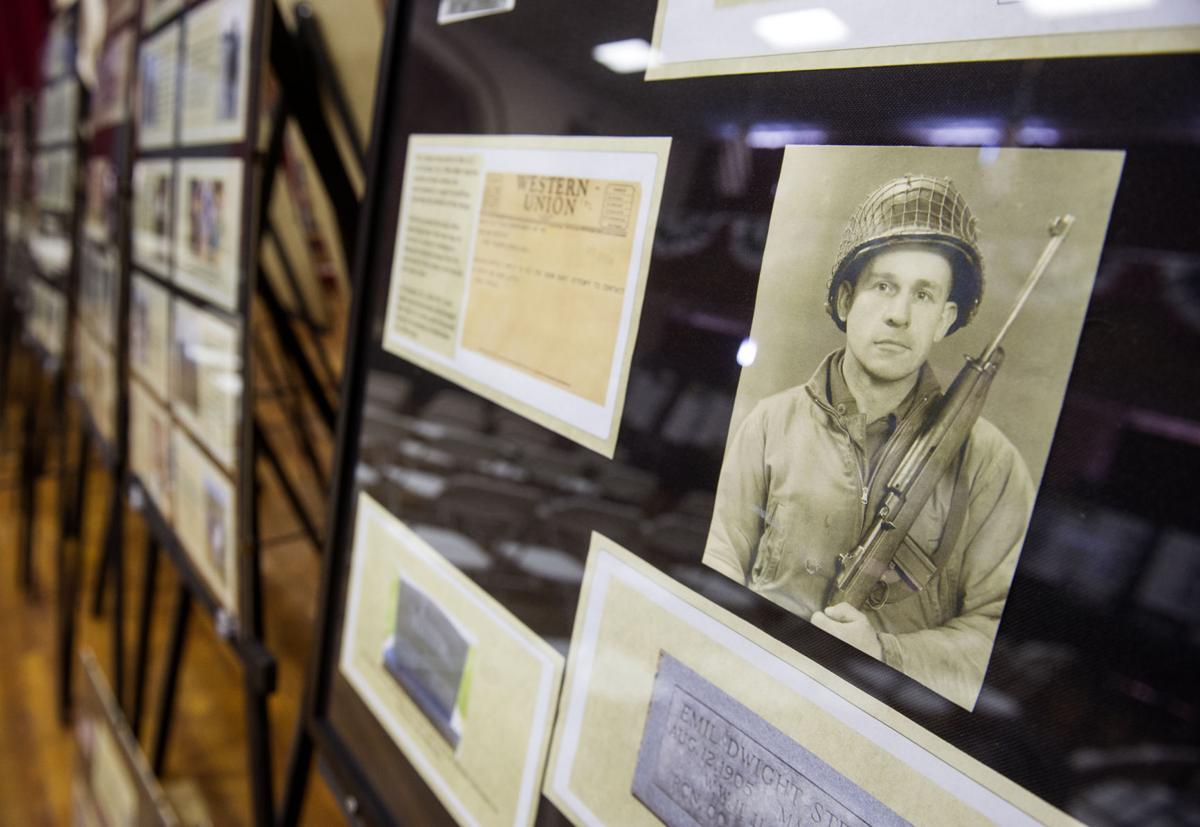 This tribute to World War II veteran Emil Steele is one of the more than 800 Otoe County veterans' stories gathered and represented by Ted Beilman and a team of volunteers to display in Nebraska City's Memorial Building for Veterans Day. 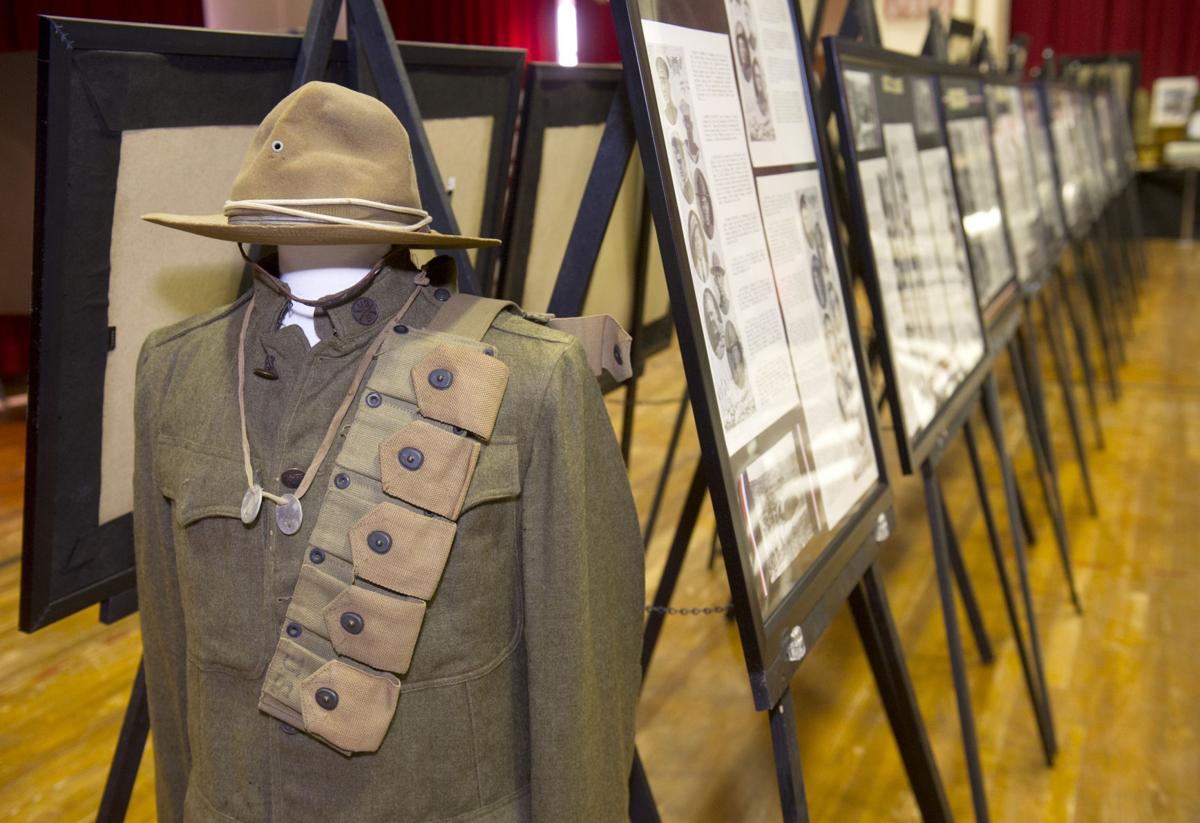 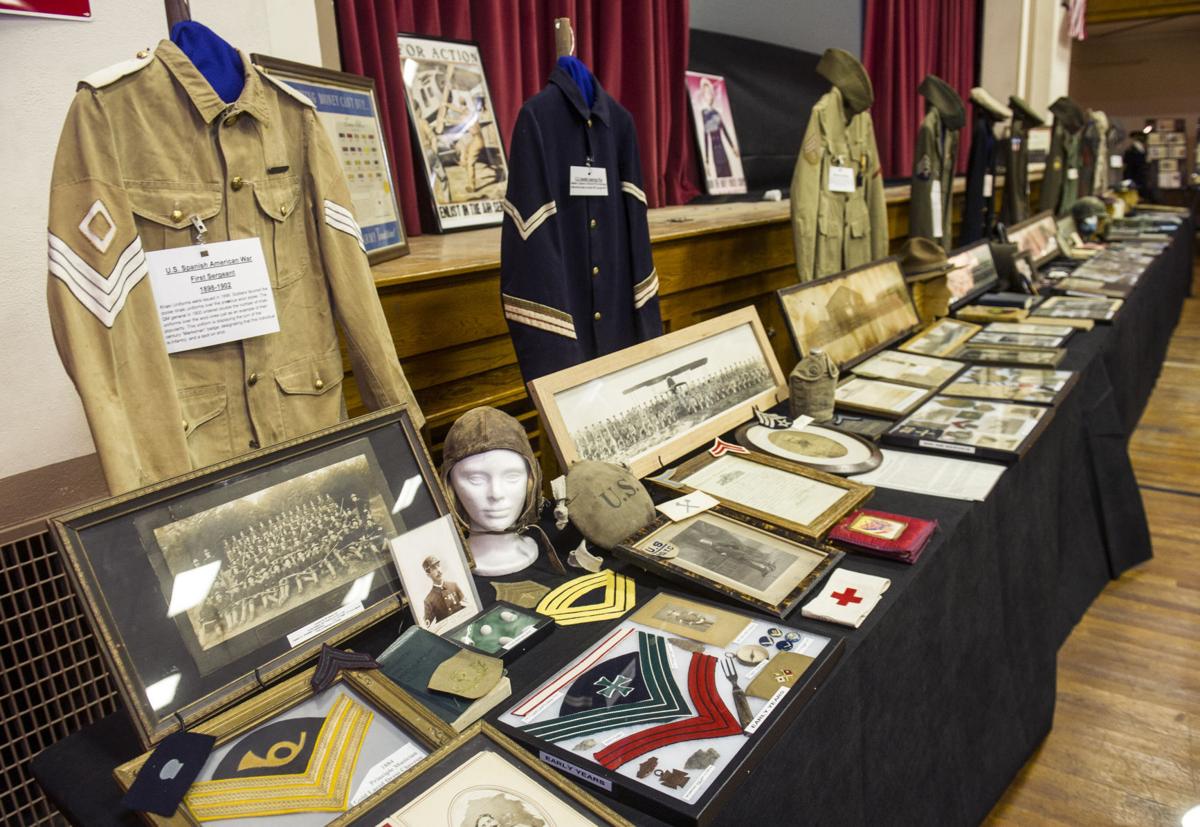 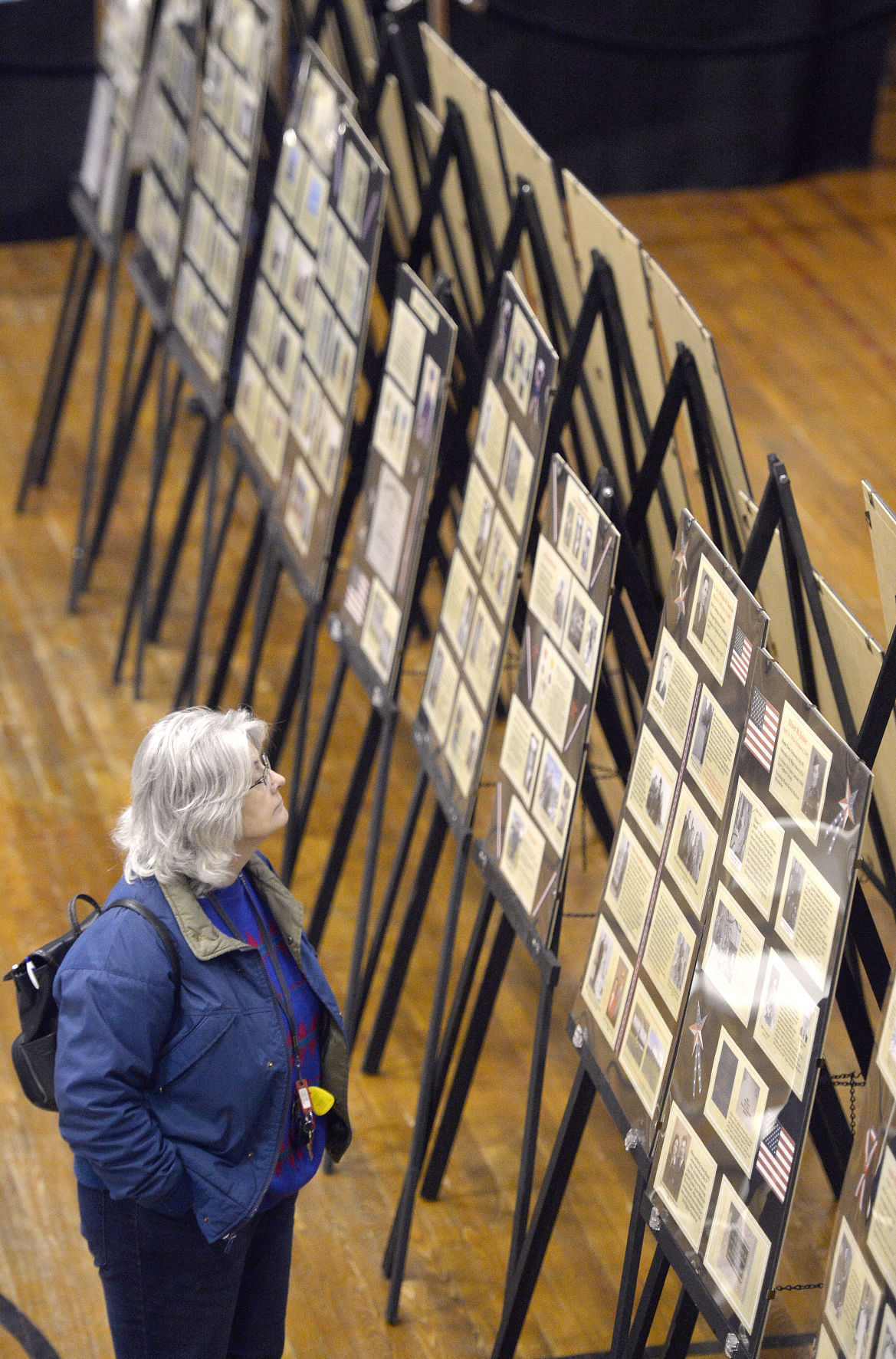 Gloria Glover looks over one of the more than 800 Otoe County veterans' stories that have been gathered and will be on display in Nebraska City's Memorial Building Saturday. 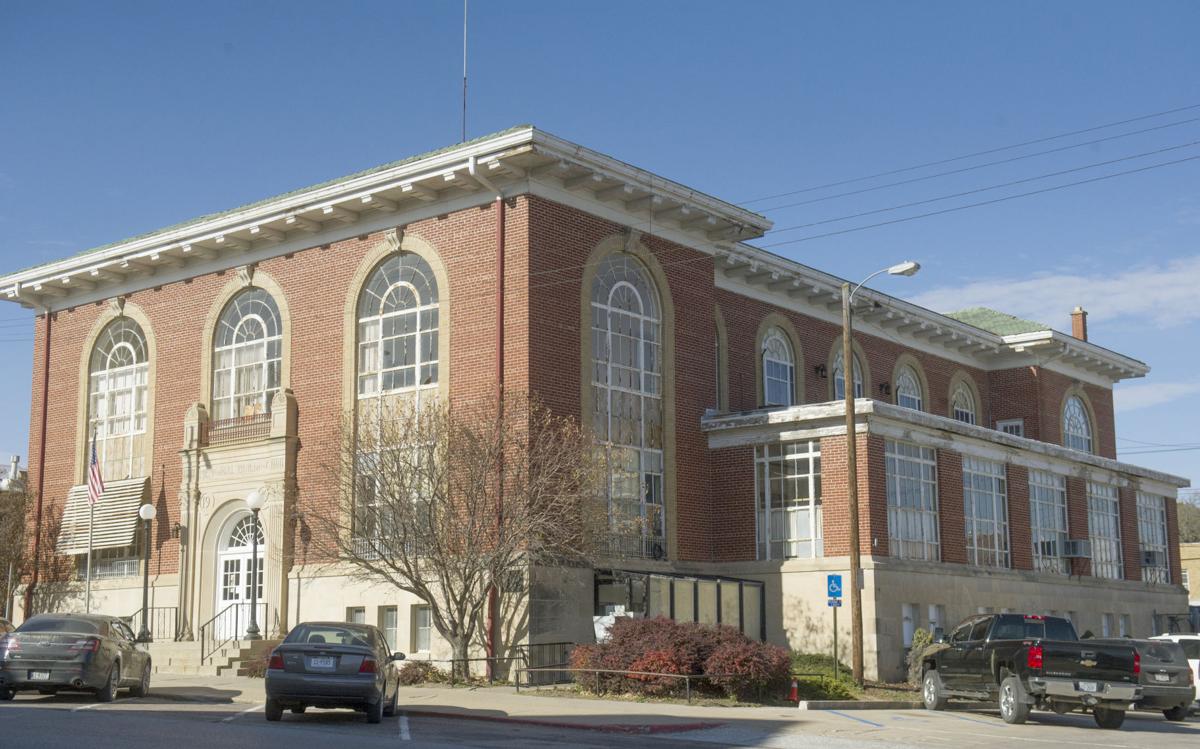 Ted Beilman has not only headed up an effort to recognize Otoe County veterans, but has also sparked new interest in preserving Nebraska City's Memorial Building.