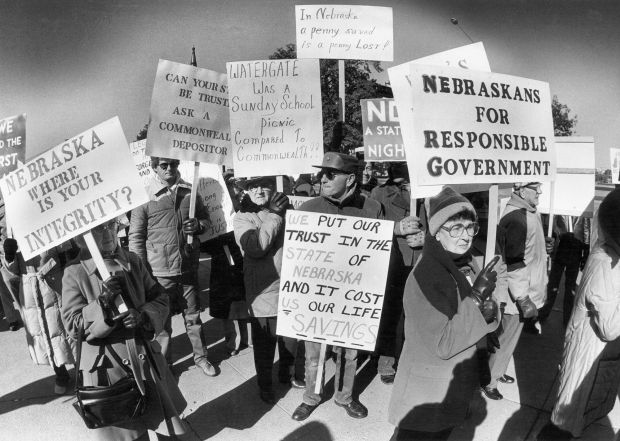 Carrying signs that read "Nebraska, the good life for bankers," "6700 depositors of Commonwealth held hostage by the state of Nebraska" and "There is a cancer growing over Nebraska governmental bodies," several hundred depositors of Commonwealth Savings Co. gather on the north steps of the state Capitol in 1984 to commemorate the first anniversary of the failure of the industrial loan and investment company. 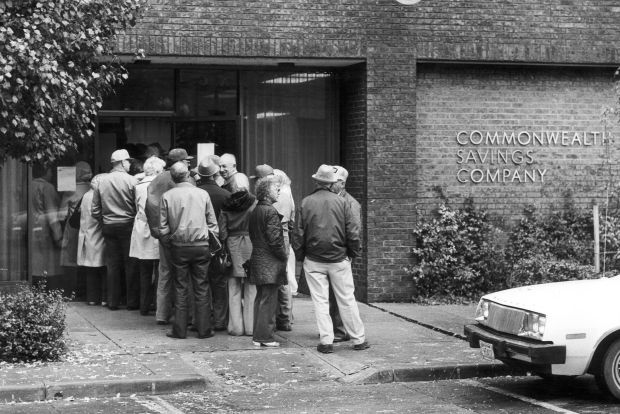 Depositors gather outside of Commonwealth Savings Co. after it was closed by the state Department of Banking in 1983. 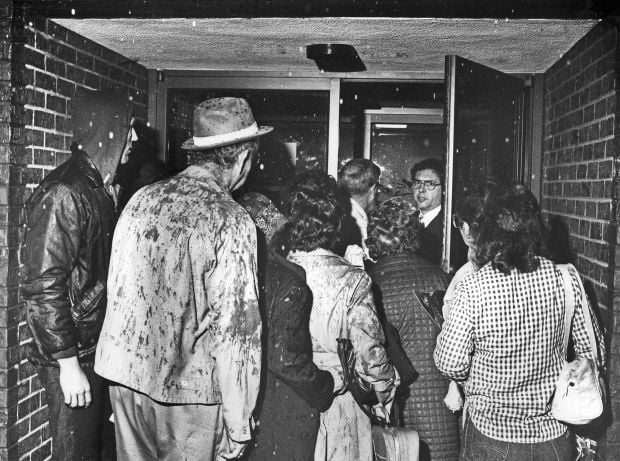 Depositors gather outside Commonwealth Savings Co. on Nov. 3, 1983, hoping for news on the money they had in the failed industrial loan and investment company. 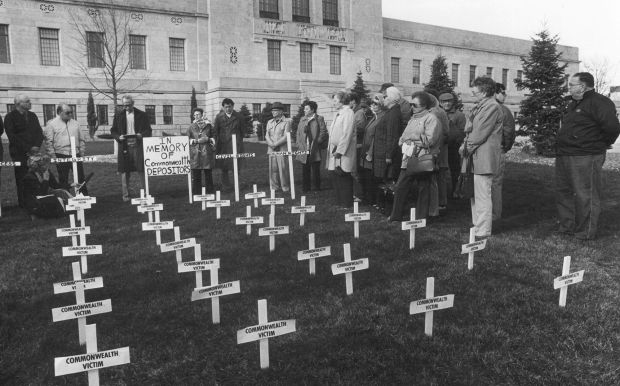 Depositors of the failed Commonwealth Savings Co. protest at the state Capitol in spring 1985. Crosses planted on the Capitol lawn protested what depositors' saw as the state's inaction in helping them recover their losses. 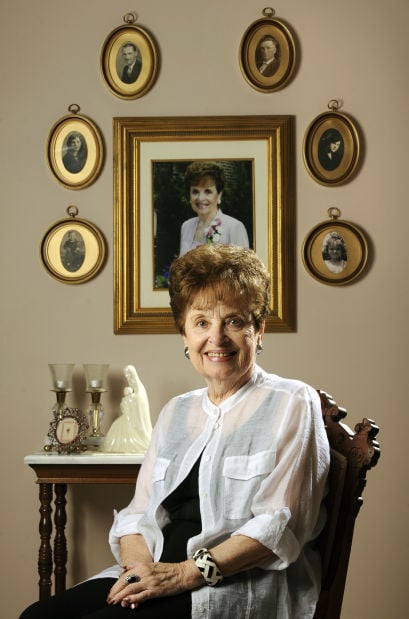 Nov. 1, 1983, began as a largely unremarkable day in many respects.

The morning newspaper ran stories on state aid to education, how unseasonably warm weather was helping the autumn harvest and how the undefeated Huskers sat atop the national polls.

By afternoon, state banking regulators declared Commonwealth Savings Co. of Lincoln insolvent and locked the doors of the industrial loan and investment operation at 11th and P streets.

And two mornings later, some of the more than 6,700 depositors who lost money in the $65 million collapse stood outside the business as snow fell and their questions went unanswered.

Depositors fought for years to get their money back, picketing the Governor's Mansion, crowding into legislative hearings, putting up billboards. They planted crosses on the Capitol lawn protesting what they saw as the state's inaction in helping them recover their losses.

Many were elderly and since have died.

Depositors, mostly middle-aged and elderly, formed the Nebraska Depositors Action Committee Inc. to keep track of the proceedings and hound state officials to fight for them.

"It's never-ending," committee spokeswoman Mary Croissant said in 1984, five months after the company collapsed. "It's so draining. It's draining on the media and the senators and the lawyers, but how do you think the depositors feel? They have not only stress and strain, but they also could be losing a vast amount of money through no fault of their own.

"... There's no doubt that we will not just sit and do nothing. We have worked so hard for so long, and we are still right."

The scandal led to the ouster of state Banking Director Paul Amen, the impeachment and resignation of then-Attorney General Paul L. Douglas and prison sentences for six people, including Commonwealth founder and owner S.E. Copple.

It turned out the Copple family was using fraudulent means, including sham sales of real estate to their friend Douglas, for example, to churn properties and inflate the value of real estate on which the institution lent money to make its balance sheet appear legitimate to regulators. In fact, they were losing enormous amounts of money as the housing market tanked due to high mortgage interest rates.

"To a large extent, Commonwealth's depositors were solid, middle-class families setting money aside paycheck by paycheck for the college education of their children or the down payments on homes or their retirement," said former state Sen. Vard Johnson, who oversaw a legislative investigation of the collapse. "The losses not only were financially devastating, they were emotionally draining, as they burst the very dreams that had caused these depositors to save."

At the time, Commonwealth was Nebraska's largest industrial loan and investment company chartered by the state and allowed to pay higher interest rates to depositors and take bigger investment risks.

Each account was guaranteed up to $30,000 by the Nebraska Depository Institution Guaranty Corp. Depositors assumed their money was backed by the state treasury, only to learn that the guaranty corporation was nothing more than a state-authorized insurance pool that was supposed to have been financed by Commonwealth and Nebraska's 31 other industrial loan companies. The pool held just $3 million when Commonwealth collapsed.

Investigations later showed that lax state oversight contributed to Commonwealth's failure. Nebraska later made all industrial savings and loans merge into banks or credit unions, where deposit insurance was much stronger.

"Obviously, one of life's lessons for each of us is a studied examination of those institutions where we keep our money to make certain that they have deposit insurance, backed by the full faith and credit of either the U.S. or else a solvent state government," said Johnson, who now practices law in Boston.

S.E. Copple pleaded no contest in 1984 to a charge of making a false bank entry to deceive bank examiners and went to federal prison on a 12- to 14-month sentence. He died in 1987 at age 90.

Also prosecuted in the scandal was S.E. Copple's son Newt, who had taken out a loan in the name of the wife of a former business partner without her knowledge. He and three other people were convicted of federal fraud charges. He served nearly three years in prison and died in 1991 at 70.

The Legislature voted to impeach Douglas based on misrepresentation of payments he got from Commonwealth Vice President Marvin Copple. The impeachment charges alleged he lied to and failed to cooperate with the investigation and that his involvement with Commonwealth tainted fulfillment of his duties as attorney general.

Douglas was tried on the charges before the Nebraska Supreme Court, which fell one vote short of the required five to find him guilty. In 1984, the court acquitted him of impeachment charges, lacking a required fifth vote to convict him of betraying his duty not to misrepresent.

He resumed his duties as attorney general, but seven months later, a Lancaster County jury found him guilty of perjury for lying to a special legislative committee investigating the failure of Commonwealth and lost his license to practice law.

Douglas resigned as attorney general in December 1984. He got his license back after the perjury conviction was overturned on appeal and practiced law until his death on Nov. 6 last year at age 85.

In 1985, the Legislature appropriated $8.5 million as a settlement of state liability in the case. Lawsuits dragged on for years. Commonwealth's assets were liquidated, and the final payout to depositors and their heirs was approved in April 2002.

In the end, depositors recovered about $40 million — about 59 cents on the dollar.

The Legislature's Banking, Commerce and Insurance Committee concluded S.E. Copple "both actively and passively milked and drained the institution for the benefit of his family."

The committee also concluded that the Co-op Credit Act passed by the Legislature in 1976 to set up a so-called insurance system for state-chartered financial institutions and its expansion in 1977 into the Nebraska Depository Institutions Guaranty Corp. "were wrong in their conception."

"Furthermore, it should never have been passed by the Legislature, it was horribly administered by the state once it was put into existence, it was motivated and used improperly by all members of the NDIGC themselves, and it was essentially doomed to failure from the beginning," the committee's report said.

"The results were inevitable. By the end of 1977, Commonwealth had put itself on a course of self-destruction through the greed of its owners, by inappropriate juggling of funds, and through the subsequent cover-up by S.E. Copple of loans to family members. Commonwealth was losing money at a rate so rapid that the ultimate demise of the institution was predictable and certain if nothing was done to stop it. Adequate warnings and indications screamed out to the State Banking Department for something to be done immediately to stop the draining and destruction of the institution.

Commonwealth profits were artificial, and the success of its so-called "self-contained-real-estate economy" was based upon the ability to influence the Lincoln City Council for favorable zoning and other action, the committee said.

While the slumping economy and high interest rates ultimately exacerbated and contributed to the collapse, it concluded, "the hard facts are (that Commonwealth was) destroyed" by the criminal acts of the Copples.

Then-Norfolk attorney David Domina, who led the investigation that culminated in the impeachment charges against Douglas, said lessons learned from Commonwealth need to be heeded today.

"The state Legislature must be reflective about the laws it passes," said Domina, who now practices in Omaha. "Political whim, or the flavor of the month, must be resisted. The Depository Insurance Guarantee Act was such a law.

"Government can never be better than the people it governs," he said. "Abuse of governmental power tends to hurt massive numbers of people and be entirely inappropriate. Citizens must be involved and vigilant. Membership in fringe organizations does not help. Good people must step forward and insist on good behavior from political leaders and captains of industry."

Former Commonwealth depositor Croissant said she and her late husband, Dick, lost $15,000 in the collapse. It could have been worse, she said, and urged people to do what they did with their investments.

"We were diversified. You just never know when something like that can happen."

Jim McKee: Safe is a reminder of Commonwealth and banking history

A safe visible in a Lincoln theater is all that remains of a long history of banking, safe deposit boxes and Commonwealth.

Russia says US failing on Ukraine but more talks possible

Nestle to pay cocoa growers to keep kids in school

Nestle to pay cocoa growers to keep kids in school

Carrying signs that read "Nebraska, the good life for bankers," "6700 depositors of Commonwealth held hostage by the state of Nebraska" and "There is a cancer growing over Nebraska governmental bodies," several hundred depositors of Commonwealth Savings Co. gather on the north steps of the state Capitol in 1984 to commemorate the first anniversary of the failure of the industrial loan and investment company.

Depositors gather outside of Commonwealth Savings Co. after it was closed by the state Department of Banking in 1983.

Depositors gather outside Commonwealth Savings Co. on Nov. 3, 1983, hoping for news on the money they had in the failed industrial loan and investment company.

Depositors of the failed Commonwealth Savings Co. protest at the state Capitol in spring 1985. Crosses planted on the Capitol lawn protested what depositors' saw as the state's inaction in helping them recover their losses.