He loves nothing better than heading out of town, pitching a canvas tent and foraging for most of his food. Later this month, dressed in Lewis-and-Clark-era attire, he will attend a primitive camp out where coolers, trash bags, flashlights and modern utensils will be prohibited.

It all began when he slept in a buffalo hide next to an open fire during a Boy Scout campout when he was young. As he grew up, he camped both with the Boy Scouts and his family. “It wasn’t just being outside. What got me into it was the idea of the first fur trade/mountain man, the whole idea of exploration,” Koch said.

“He is a pretty cool guy,” his wife, Jennifer, said. “If he wants something and can’t find it anywhere, he will figure out how to make it. He sews anything he wants. He is very, very talented.”

Koch has devoured old woodsman books, field guides and old Boy Scout handbooks. He has built up a large library of such books.

He goes camping at least once a month alone, with his family or with friends from muzzleloader clubs. He has mastered many skills, including how to eat. He has headed out on Boy Scout wilderness survival weekends with little food. “I might take nothing out there, and within a half hour I can be somewhere where I can get food. It’s fantastic living in the woods,” he said.

Some weekends, he takes nothing but dried corn and jerky to supplement hunting squirrels and other small game. He has learned how to put out traplines for coyote, beaver and raccoon, “although I’m not as involved with that as much as I used to be. It takes a lot of time.”

He has learned a lot about wild edibles, too. “For a well-rounded woodsman, I wanted to know what I could eat in the woods, and what things are worth eating,” he said.

“Dandelions are edible, but they’re bitter. Every part of the common milkweed is edible until it dries out. In the spring, its young shoots taste a lot like asparagus. When they get bigger and develop buds, and you can fry them like a fritter.”

His favorite winter jacket is one made of brain-tanned deer. He didn’t buy it; he traded for it.

Brain tanning is the ancient art of preserving animal hides using the emulsifying agents in brain matter, which help break up the mucous membranes that cause animal hides to harden. He cut up a wool blanket to make its lining.

Koch sleeps in an “authentic tent” made of canvas without a floor. He can put up his 12-by-14-foot tent in 45 minutes.

“The great thing about a canvas tent is that hail bounces right off of it. It’s pretty resilient at an event where you might have 300 people, all in canvas tents, and no place to seek shelter. You batten down hatches to be sure the tent doesn’t blow away,” he said.

At a large muzzleloader event last Memorial Day, several vicious storms picked up a tent or two, but “with the kind of people who are into this, we’re a big family, so we came together and helped everybody out,” he said.

One of Koch's talents is starting a fire without matches. “I never mastered that until later in life. It was knowing which woods work together. In this area, it’s cottonwood and eastern red cedar. Luckily in Nebraska, those trees are everywhere,” he said.

Koch, who served in the U.S. Marines for four years and works at West Pharmaceuticals, met Jennifer at a tattoo parlor in Grand Island 20 years ago, where he worked at the time. They married in 2001.

Koch’s passion is a part of their life. They’ve camped in a canvas tent at Rocky Mountain National Park. Koch prefers a canvas wall tent when he’s in the field because “it feels more like hunting. It’s a tradition for us,” he said.

Jennifer enjoys hunting, too. She doesn’t shoot; instead, she sits in the stand or blind while Koch hunts. “I enjoy the peace and quiet and watching the wildlife,” she said.

She cleans what Brandon brings home, as she did for her father and brother years ago. Their sons have been hunting, too. Kemper, 16, doesn’t like the blood and loud noises, but Kase, 12, loves it.

During Christmas, the family camped for three days on a private site on muzzleloader club property near Cairo and the Middle Loup River. It has two wells, no electricity and 16 outhouses because it handles big events like the High Plains Regional Rendezvous last summer, attended by 800 people who dressed in pre-1840s attire and “hid their cellphones,” Koch said.

On Christmas, the Kochs were alone except for one other family. It took them three hours to unpack and set up the tent, four cots, food and camping gear. They set up a wood-burning stove, properly vented, inside the tent.

“We know what we’re doing,” Koch said. “If you have the right equipment, wool blankets, buffalo hides, it’s easy to stay warm if well-prepared. It was 18 degrees outside but 70 degrees in the tent.”

The family cut down a little cedar that they called a “Charlie Brown Christmas tree.” They took it into the tent and decorated it with items they found in the woods, along with ornaments made out of wood, dangling shotgun shells and yarn garlands brought from home. “The kids loved it,” Koch said.

The Koch family never buys beef. Koch shoots between two and four deer each season. He and Jennifer process it into sausages, hamburger and more.

“Meat’s expensive. We take pride in doing it ourselves. Jennifer helps butcher and put the meat up because her family has deer-hunted for years,” he said.

Koch also is eager to find roadkill. “I get it, tan it and make a hat out of it or something,” he said.

He’s passing his skills along to the next generation. As assistant scoutmaster of Boy Scout Troop 158 in Kearney, he has taken the boys camping in Colorado, Kansas, Canada, the Boundary Waters in Canada and beyond. Son Kemper is an Eagle Scout.

Koch is also a blacksmith. He has a side business, Skab Leatherworks and Forge.

“There was a lot of outdoor stuff I wanted, but I saw how much it cost, so I tried to make it. Now my blacksmithing and leatherworking pays for my outdoor hobbies. The more periodically authentic it is, the more valuable it is,” he said.

In that role, he has volunteered at the Buffalo County Historical Society’s Trails & Rails Museum.

His handiwork includes rotisseries used in the 1800s, a working beaver trap patterned after the style of the 1850s, branding irons used both for ranches and decoration, and more sculpture ware pieces. “I hope I give people appreciation for the work it takes to make these items,” he said.

Koch made a branding iron that is currently part of a fur trade display in a North Carolina museum.

Koch doesn’t know whether to term his passion a hobby or a lifestyle, but when their children are grown, he and Jennifer hope to move to the Black Hills, where he will do blacksmithing and leatherworking at sites open to tourists.

“I like to make this stuff. There aren’t a lot of people who are teaching and passing on these skills,” he said.

A 22-year-old Omaha man was killed in a crash early Thursday.

In a span of just 10 minutes, Joseph Jones entered a west Omaha Target store with an AR-15 style rifle, fired multiple shots and was killed by…

Granddaughter has not given up hope on missing Aurora couple

Even though they've been missing for almost three weeks, Laci Fleming believes they're still out there somewhere.

Hundreds of Nebraskans lined the Capitol halls to testify at a Health and Human Services Committee public hearing on LB626, labeled the "Nebra…

The trauma was evident among those returning. Some were still too shaken up to talk. “I don’t even want to be here,” said one young mother. 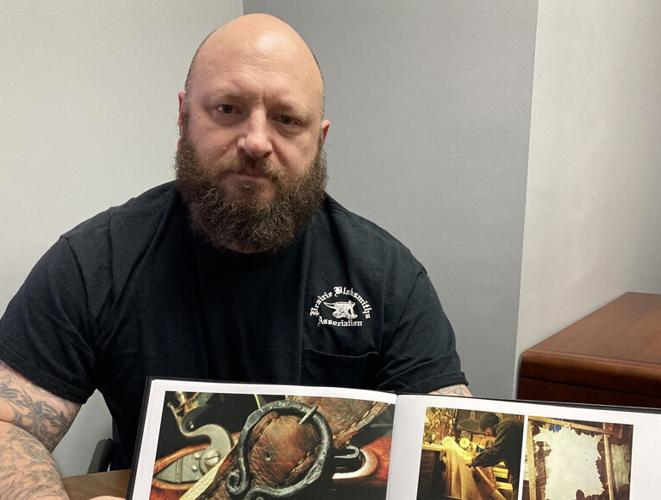 Brandon Koch is also an accomplished blacksmith. This book is a portfolio of items he has created. 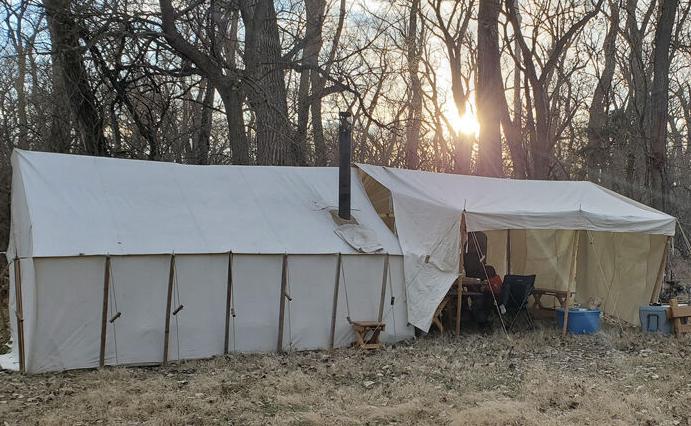 The family can set up their tent in 45 minutes. Adjacent to it is the open cook tent.