BELLEVUE — The jet engines are roaring again at Offutt Air Force Base.

One by one, eight of the 55th Wing’s RC-135 reconnaissance variant jets touched down Friday afternoon on the newly rebuilt runway after a short hop from their temporary home in Lincoln.

At the controls of one of the wing’s training jets, Col. Kristen Thompson, the 55th Wing commander, got the honor of making the first landing at 2:08 p.m.

It was the first landing at Offutt in 18 months, since the beginning of a complete reconstruction of the base’s single 2-mile-long runway.

“Ladies and gentlemen, we’re finally here!” Thompson told a crowd of about 600 55th Wing airmen, veterans and their families.

She turned the event into a wing party. The Heartland of America band entertained. There was a military working dog demonstration, food trucks and bounce houses for the kids.

Rebuilding the 80-year-old runway cost the Air Force $200 million: $169 million to replace the runway and neighboring apron and $31 million to renovate temporary office and hangar space at the Lincoln Airport.

“Today we just went from having the oldest and worst runway in the Air Force, to the newest and the best,” said Rep. Don Bacon, a former 55th Wing commander.

Offutt planes getting ready to leave Lincoln for good

Offutt nuke-sniffers: Out with the old, in with the new

The runway was originally built in 1941 for the new Glenn L. Martin Bomber Plant, where Nebraska workers produced more than 2,000 aircraft during World War II. It was extended to its current length in the mid-1950s to accommodate Strategic Air Command aircraft.

Since then, Bacon said, the Air Force has patched the runway every decade or so. But by the time he commanded the 55th Wing in 2011-12, it was in awful shape.

He recalled one occasion when a plane carrying a visiting four-star general had to circle the airfield to wait for repairs that had suddenly become necessary.

U.S. Sen. Deb Fischer said she has been working to secure military and congressional support for the runway rebuild since she took office. She said when she visited the base, 55th Wing commanders would give her chunks of chipped runway concrete to take back to Washington.

“It was clear the runway was a disaster. It was in disrepair,” she said. “It has been a long, long road since then. But our efforts and our advocacy has paid off.”

Gen. Mark Kelly, who heads the 55th Wing’s parent command, the Air Combat Command, praised the collective effort that got the runway built, and kept the wing operating out of Lincoln without slowing down.

He said 55th Wing crews flew 1,800 mission sorties during the year and a half of construction, at a time when rising world tensions made its mission more critical than ever.

“It took a whole village to make it happen,” Kelly said. “Offutt is a Cold War veteran. We need it to be that veteran today.”

The 55th Wing’s lead production superintendent, Master Sgt. Mitchell Morelos, and his team of aircraft maintainers bore the brunt of the hardship. Commuting to and from Lincoln on top of a normal duty day “has taken its toll,” he said.

Not only that, they frequently had to haul tools and specialized equipment to Lincoln. Hangar space there was at a premium.

“Our guys were out there, rain, snow or shine, working outside every day,” Morelos said. “It’s an absolute morale boost to have them back.”

Thompson described the runway closure as part of a “terrible trifecta” of hardships the 55th Wing has faced in the past three years, along with the catastrophic March 2019 flood that caused about $1 billion of damage, and the COVID-19 pandemic that has disrupted workplaces and schedules.

“Today we check one of this trifecta off the list,” she said. “The runway is back.”

An RC-135V Rivet Joint reconnaissance jet from Offutt Air Force Base landed safely at Lincoln Airport after declaring an emergency during a training flight.

A crowd watches one of the 55th Wing’s RC-135s land at Offutt Air Force Base on Friday following an 18-month runway reconstruction. In all, eight RC-135s landed to mark the runway’s reopening. 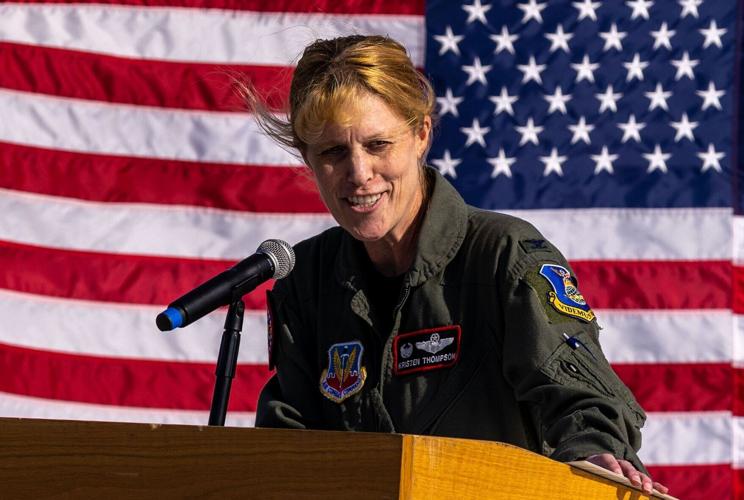 Col. Kristen Thompson, commander of the 55th Wing, speaks at a ceremony celebrating the completion of the runway reconstruction at Offutt. She landed the first jet that touched down Friday.