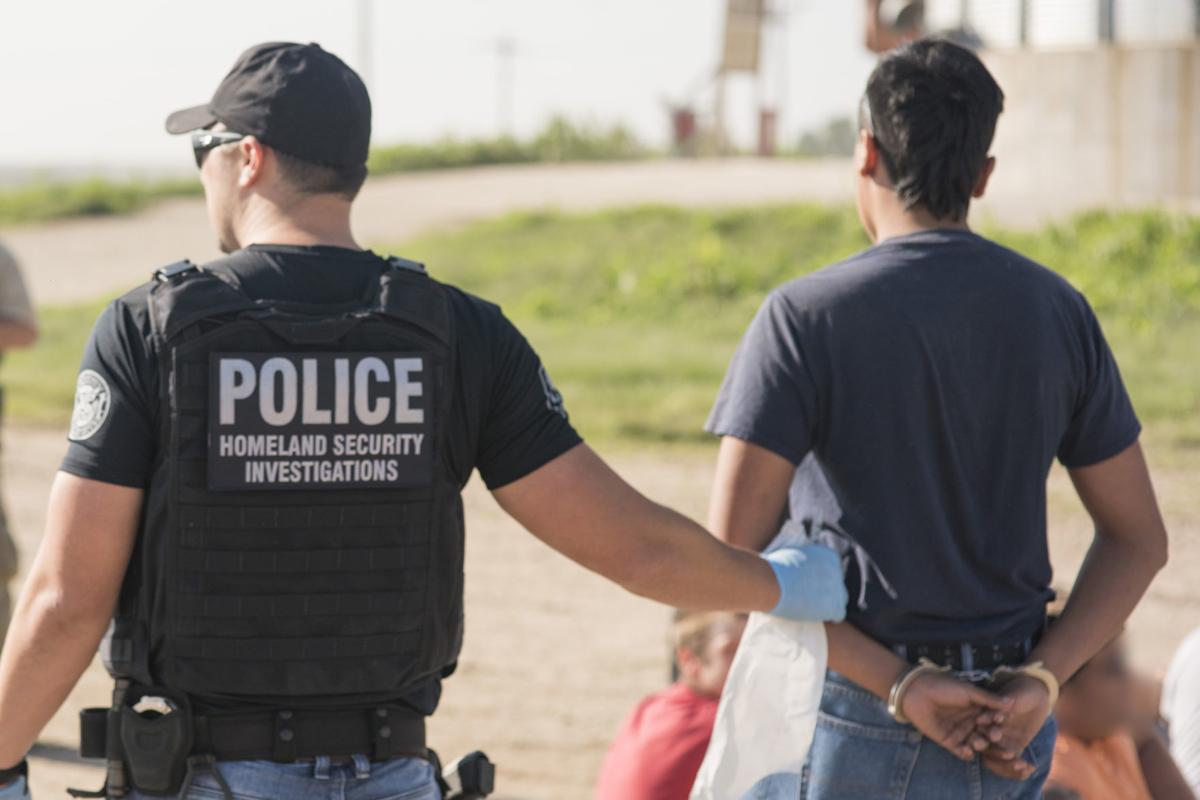 In this photo provided by U.S. Immigration and Customs Enforcement, a special agent leads a suspected illegal worker from a location in Bartlett, one of 11 sites in Nebraska where warrants were served in August. 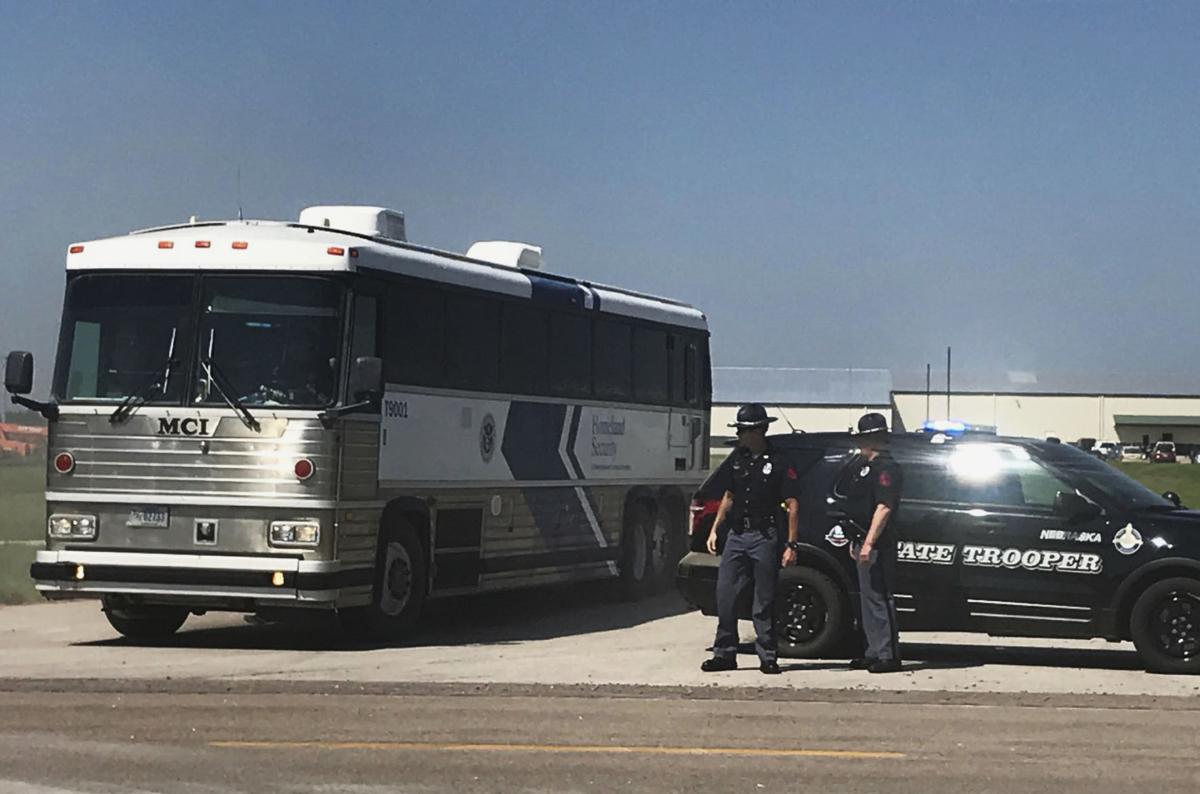 An ICE bus pulls out of a tomato plant in O'Neill after an immigration raid at the plant in August 2018.

U.S. Immigration and Customs Enforcement officers Wednesday issued criminal arrest warrants for 17 employers and other individuals charged with exploiting illegal immigrant employees in six Nebraska communities during a series of raids that swept up 133 workers.

The operation, which also impacted two communities in Minnesota, was directed at employers and workers in O'Neill, Atkinson, Stromsburg, Ainsworth, Bartlett and Royal. Search warrants were also issued in Las Vegas.

"The job magnet in the United States is primarily what draws illegal aliens across our borders," said special agent-in-charge Tracy Cormier of St. Paul, Minnesota.

"This Homeland Security Investigations-led criminal investigation has shown that these targeted businesses were knowingly hiring illegal workers to unlawfully line their own pockets by cheating the workers, cheating the taxpayers and cheating their business competitors."

The workers who were apprehended in the operation will either be issued notices to appear before an immigration judge and released from custody or remain in ICE custody pending immigration court proceedings.

"Authorities suspect the illegal aliens who were knowingly hired as part of this alleged conspiracy were exploited (through) force, coercion or threat of arrest and/or deportation," according to an ICE news release.

The release said the illegal immigrants were allegedly required to cash their paychecks at an illegal remittance business for a fee, have tax money deducted from their pay even though this money was never paid to the government and were coerced to remain quiet about this criminal activity.

She described the operation as one of the largest in Homeland Security Investigations' 15-year history.

"I would say the amount of criminal warrants that are being executed will be one of the largest for HSI," she said. "I'm not aware of a bigger one."

Between 350 and 400 federal, state and local law enforcement officers worked together on the arrests, she said.

The arrest warrants allege exploitation of illegal immigrants "for profit, fraud, wire fraud and money laundering in Nebraska and Minnesota."

Most immigration raids have targeted workers suspected of being in the country illegally.

Suspects who were arrested are scheduled to appear in U.S. District Court in Lincoln on Thursday.

The enforcement sweep in Nebraska was most visible in O'Neill on Wednesday morning when ICE agents and Nebraska State Patrol troopers surrounded a tomato greenhouse operation and led detained employees away in two buses bound for Grand Island.

Early reaction to that raid preceded the later announcement stating the operation was targeted more directly at employers and others who had "colluded to create an illegal alien workforce in their respective businesses than at the workers themselves."

The workers who remain in ICE custody after being administratively arrested on immigration violations will be transported to a nearby processing facility and placed in removal proceedings, according to the ICE announcement.

"Detained aliens will be held in facilities in Nebraska and Minnesota while awaiting removal proceedings."

In early reaction prior to the announcement detailing the operation, Gov. Pete Ricketts said ICE is just "enforcing the law" when it arrests workers who may be illegally living in the United States and that Nebraskans "want law and order to be upheld."

Nebraskans "now have a front-row seat to the destruction that (the Trump administration's) anti-immigrant policies levy on families and communities," Nebraska Appleseed had stated in response to the sweep that caught up illegal workers in O'Neill.

Sen. Adam Morfeld of Lincoln tweeted that he had reached out to the O'Neill Public Schools to "offer assistance and resources to the children displaced from their parents" because of the raids.

Morfeld is executive director and founder of Civic Nebraska.

Rose Godinez, legal and policy counsel for ACLU of Nebraska, said "immigrants enrich Nebraska communities in countless ways and are fulfilling an important role in our local economy."

"Change the laws if you don't like what's happening," one critic responded.

Where warrants were served in Nebraska

The United States is moving toward a more selective, merit-based immigration policy that "focuses more on employer needs and the needs of the …

An Iowa woman took a 31-mile ride in a stolen, unmarked Nebraska State Patrol car after an investigator stopped to help following a crash on I…

Sasse: 'I'm glad Mueller is there' to sort out questions of Russian interference

Sen. Ben Sasse believes special counsel Robert Mueller is the right man for the job and that his investigation into Russian interference in Am…

An assistant U.S. Attorney shot back against allegations that she and ICE agents kept a man from seeing his lawyer last summer after he was ar…

In this photo provided by U.S. Immigration and Customs Enforcement, a special agent leads a suspected illegal worker from a location in Bartlett, one of 11 sites in Nebraska where warrants were served in August.

An ICE bus pulls out of a tomato plant in O'Neill after an immigration raid at the plant in August 2018.