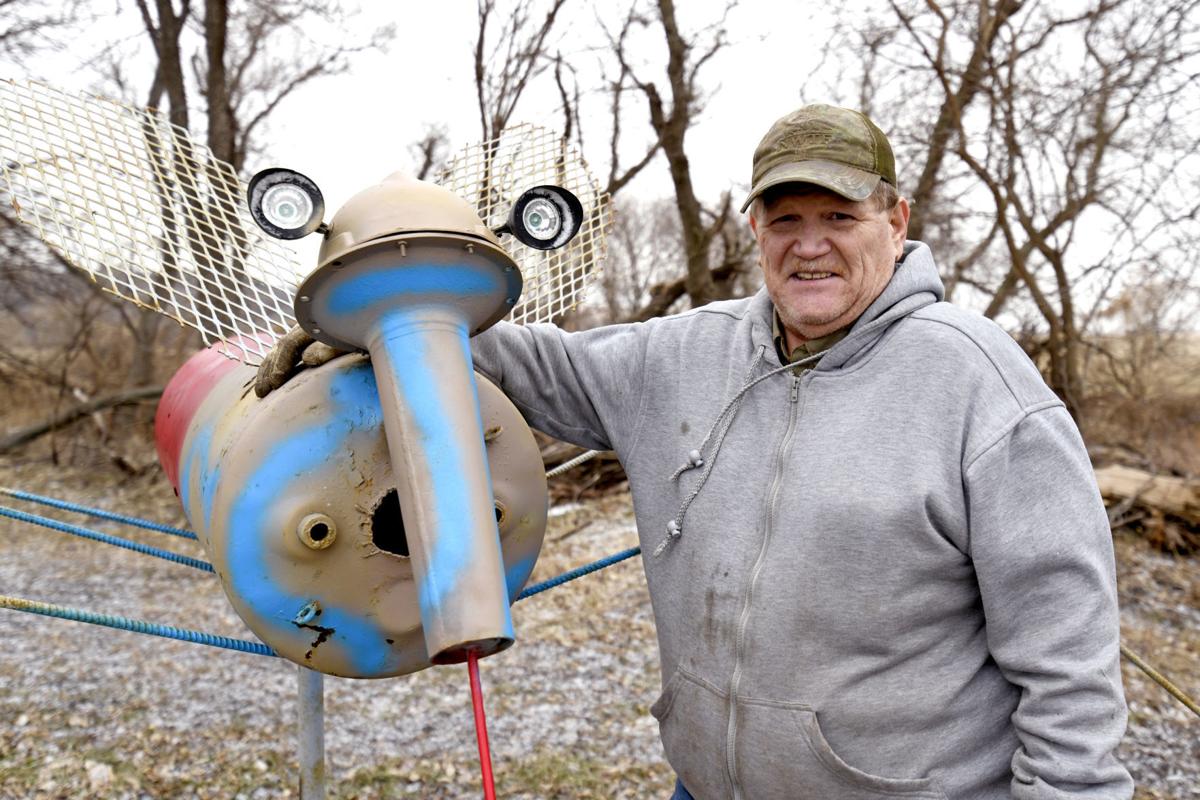 Joe Wachter shows off his homemade art displayed alongside Nebraska 35 near Hubbard. 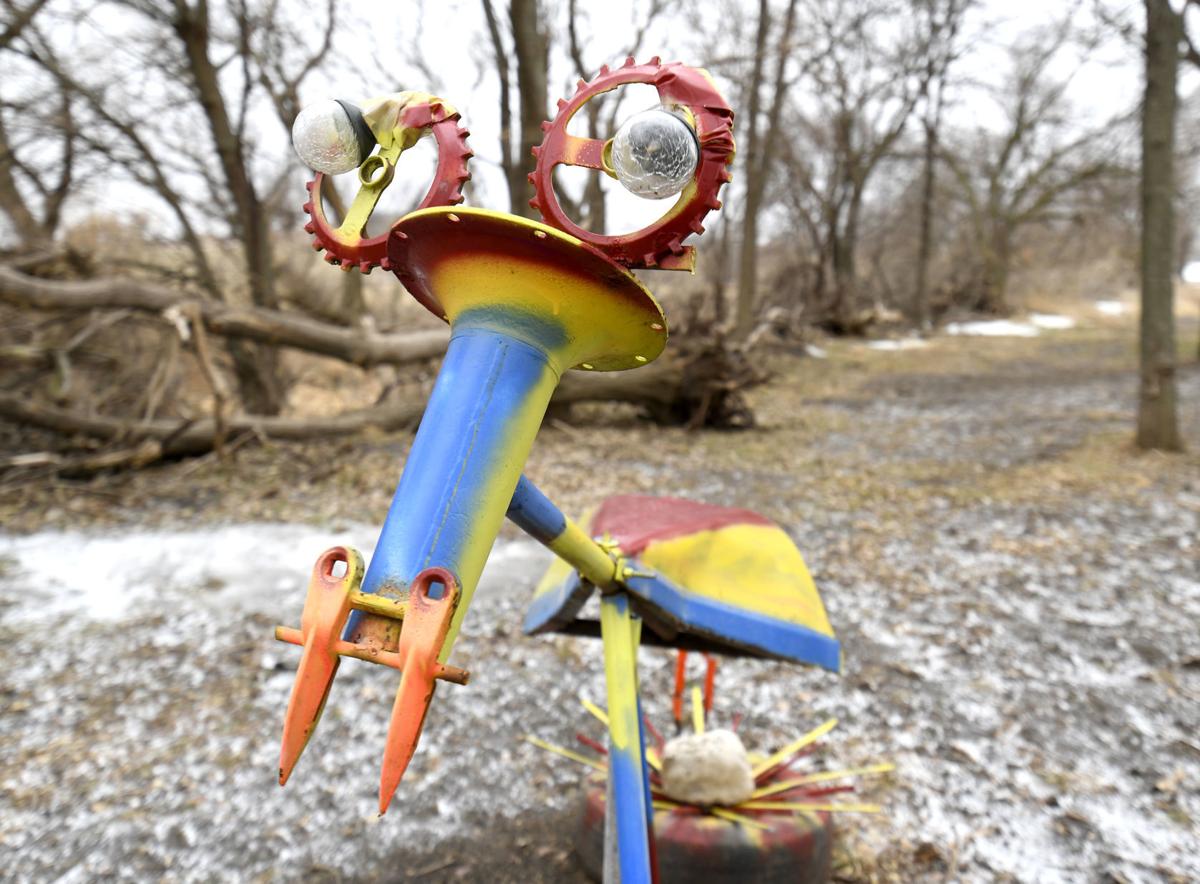 A bird with its nest stands overlooking Nebraska 35 near Hubbard.

HUBBARD -- Driving past Joe and Terri Wachter's place, it's hard not to do a double-take, followed by a chuckle, or at least a smile.

Not to encourage drivers to take their eyes off the road, but a quick glance at a cleared area on the south side of Nebraska 35 just east of Hubbard gives one a glimpse into Joe Wachter's creative mind.

"I don't know if you want to call it creative. Some people tell me I've got a warped brain," Wachter said with a laugh, describing the colorful animal sculptures he's created and placed on his property near the highway.

Call it what you want, but there's no debate that the items are eye-catching.

A large bird was first a couple years ago, followed by a mosquito last spring and a baby bird in the summer. Painted with bright colors, the pieces stand out in an area that was formerly overgrown with trees and brush. As Wachter cleared the area, he felt it needed something to make it look even nicer and, hopefully, discourage people from mistakenly driving into it or throwing their trash out along the highway.

Always one to tinker in his shop, making small creatures out of shovels, rakes and bike forks, Wachter looked around his place and saw scrap items that gave him the idea for the bird.

"I just grab whatever I can grab and start throwing it together," he said. "I don't have any set patterns. If I find something, I'll figure something out and start welding."

He built the bird with, among other things, a corn snout and part of a truck rear end, and moved it into place with a skid-steer loader. It wasn't as visible from the highway at the time, but once Wachter cleared some more brush and trees, more passersby and neighbors began to notice.

A water heater tank and "some other junk I had laying around here" were turned into the mosquito. A bicycle fork, shovel and mower sickle guard became the baby bird that accompanies the larger bird.

A neighbor as a joke last summer placed a large, white rock resembling an egg near the big bird, so Wachter fashioned an old tire into a nest for the egg, which he plans to "hatch" sometime this spring. The offspring, a colorful creature built out of a bicycle fork, plastic and a large chunk of tree root, sits finished in Wachter's shop, waiting to be placed in the nest next to mama bird.

Wachter next plans to turn an old fuel barrel secured from a neighbor's field into an elephant. How many more animals might take up residence on his property is hard to say. It depends on what other potential materials he spots at neighbors' homes. Or what pieces of junk others offer him.

Wachter credits his father for his abilities. An excellent metal-worker and machinist, Wachter's father brought a metal lathe to their farm years ago as well as a small wood lathe.

"I started messing with it, and it just hooked me," said Wachter, who learned to weld from his father and while working construction.

"It's just something to do," he said. "People tell me I must have too much time on my hands. It's my relaxation."

It's time well spent, he said, getting him out of the house and away from the TV.

It's hard to see the roadside creations from his home or shop, but every now and then, Wachter will notice a motorist slow down, undoubtedly taking a longer look instead of just zipping by.

He downplays his creativity, passing it off as a way to repurpose scrap items and maybe get a laugh or two.

"The main thing is that I can have some fun doing it," he said.

A former Lincoln woman living in eastern Australia tells of the dramatic scene as people fled the fires and how she and her family found reasons to be thankful.

'We like what they're doing up there': Neighbors help create a diverse tree habitat in the city

The Vintage Heights Neighborhood Association has a Green Team committee and is one of 104 arboretum affiliates across the state, working to better their communities.

Cindy Lange-Kubick: I’ve ended yet another year of loving books and I’m happy to report -- and share -- my reading list with my book-loving readers.

Joe Wachter shows off his homemade art displayed alongside Nebraska 35 near Hubbard.

A bird with its nest stands overlooking Nebraska 35 near Hubbard.