William Jennings Bryan has been living a low-key life lately, far from the millions of annual guests who used to visit his longtime home at the U.S. Capitol.

For the past few weeks, the three-time populist presidential candidate has been kept under red, white and blue wraps in the Nebraska National Guard Museum on the west side of Seward, awaiting his second unveiling in 82 years.

“When they opened up the crate and stood the statue up for the first time, you’re like: ‘Wow. That’s impressive,’” said Jerry Meyer, the museum’s historian.

The statue’s move from Washington -- where it was on display in the U.S. Statuary Hall since 1937 -- was made necessary by Standing Bear, whose 9-foot bronze likeness booted Bryan from the Capitol last month.

Each state is granted two sculpted representatives in the U.S. Capitol, and if a state decides to replace them -- as Nebraska did -- then the old statues have to find a new home somewhere.

But where? After a two-town competition, Bryan’s fate is set. And the house-hunting is just beginning for Morton.

A year ago, former Mayor Chris Beutler wrote a letter to state Sen. Tom Brewer, chairman of the Standing Bear Selection Committee, which was charged with getting the Ponca chief to Washington and bringing Bryan back.

“We believe that display of the bronze sculpture of Bryan by prominent artist Rudulph Evans in a prominent public location in Lincoln would be a fitting tribute to 'The Great Commoner,'” the mayor wrote.

Bryan was a lawyer from Illinois who visited Lincoln in 1887 and made it his home a year later. He successfully campaigned for Congress from here, published his newspaper here, ran for president three times from here.

The city identified two spots for the 5,000-pound pedestal and statue: on the recently refurbished Centennial Mall near the State Office Building; and on the southwest corner of 12th and O streets, where Bryan could gaze across the intersection at the building that housed his law offices more than a century ago.

“We believe that both locations are meaningful placements for the statue, with our preference being the location on Centennial Mall,” Beutler wrote.

The city of Lincoln included altered images with the statue superimposed in both spots.

But the National Guard Museum in Seward wanted Bryan, too.

“It’s a surprise to a lot of people. That’s why I want to tell the story.”

Here’s the short version: In 1898, an inexperienced Bryan volunteered to help the U.S. fight Spain, joining the 3rd Nebraska Regiment.

“It was a unique regiment,” Meyer said. “Democrat populists and Republicans all forming together in a regiment. But he wasn’t a military guy.”

That didn’t matter to the other soldiers, who voted unanimously to make Bryan their colonel. It helped that his second-in-command was a military guy, a former adjutant general.

Bryan telegraphed President William McKinley on April 25 that he and his men were ready to fight. They were mustered into federal service July 13 as the 3rd Nebraska Volunteer Infantry headed south to Florida.

But they never saw combat. “McKinley is a Republican,” Meyer said. “And McKinley is not going to let him be a war hero.”

So the Nebraskans waited, and waited, in Florida. After the U.S. and Spain signed a peace treaty in December, Bryan resigned and returned home -- and the rest of the regiment went to Cuba for occupation duty.

That connection to the guard during the Spanish-American War served as the foundation of the museum’s pitch, said state Sen. Mark Kolterman of Seward.

“They’re setting up a display of people who had been in the Nebraska National Guard to show you can be in the Guard and at the same time have another career,” he said.

The Standing Bear Selection Committee could listen to the competing proposals, but it couldn’t make the final decision, said Brewer.

The committee considered the pitches and voted, he said, ultimately recommending to Gov. Pete Ricketts that Bryan move to Seward.

Here’s why: First, Lincoln already has a Bryan sculpture, cast by the same sculptor and on display at Fairview, his former house on Sumner Street next to the hospital that bears his name.

And Lincoln’s proposed locations weren’t ideal for a piece of art that had lived its life inside. “The concern was the statue would not fare well outdoors,” Brewer said.

“It just makes sense,” Kolterman said. “A lot of people will see it here. It will be in a prominent location.”

It had to reinforce the floor with bracing in the basement to support Bryan’s weight. Then it unpacked and stacked the statue and pedestal, covering Bryan in patriotic bunting.

* The public is invited

The Great Commoner’s covers were scheduled to come off at a dedication Friday, and he’ll settle into his new space for the foreseeable future -- despite a suggested compromise.

In his letter to Brewer, Beutler said the city would support a two-year display at the museum to honor Bryan’s military service, before a long-term Lincoln installation.

But Bryan’s move to Seward is considered permanent, Meyer said.

Willa Cather goes to Washington next year, and the group in charge of getting her there has been busy.

It’s also raised more than $200,000, thanks primarily to a donation by Senior U.S. District Judge Laurie Smith Camp, said Ron Hull, a member of the committee.

“Like most of us in Nebraska, she recognizes the importance of Cather’s work,” he said.

“The final decision will be the Willa Cather National Statuary Hall Selection Committee,” he said. “Not the governor.”

That contradicts what Taylor Gage, the governor’s spokesman, said in late September: “The Governor’s Office will make the decision on where the Morton statue will go.”

This week, when told about the committee’s plans, Gage said the governor’s office has been visiting with the committee, but didn’t elaborate.

Still, the Cather committee is moving forward. On Tuesday, it issued a request for proposals, inviting potential homes for Morton to make their pitches.

The group wants to hear where Morton would be a good fit and why -- and if the proposed sites are indoor or outdoor, whether they’re publicly accessible, and details about financial plans for maintenance, upkeep and insurance.

And it will give preference to sites that can cover the estimated $5,000 cost to haul the statue home, Goforth said.

It will accept proposals until the end of the year, and plans to make a decision in January.

Months in the making, new exhibit honors role of paratroopers

SEWARD -- The Nebraska National Guard Museum already had more than 11,000 pieces honoring the role of citizen soldiers since 1854.

Fixing fence, buying a bird: Lincoln cemetery dealing with other types of loss

Wyuka Cemetery has been mourning more than the dearly departed lately.

Up for auction: 6,000-square-foot fixture on Johnson Lake

Lincoln at the Capitol: Many references to the former president are in the design

When the small village of Lancaster was selected as Nebraska’s new capital location, it was renamed after Abraham Lincoln. Nebraska has contin…

Former first lady Laura Bush is honorary national chair of the public fundraising drive. Bush spoke at the dedication of the National Willa Cather Center in 2017.

After 80 years in Washington, J. Sterling Morton will come home — all 5,500 pounds of him

Nebraska City is picked as the new home for the statue of J. Sterling Morton, which has been on display at the U.S. Capitol since 1937. 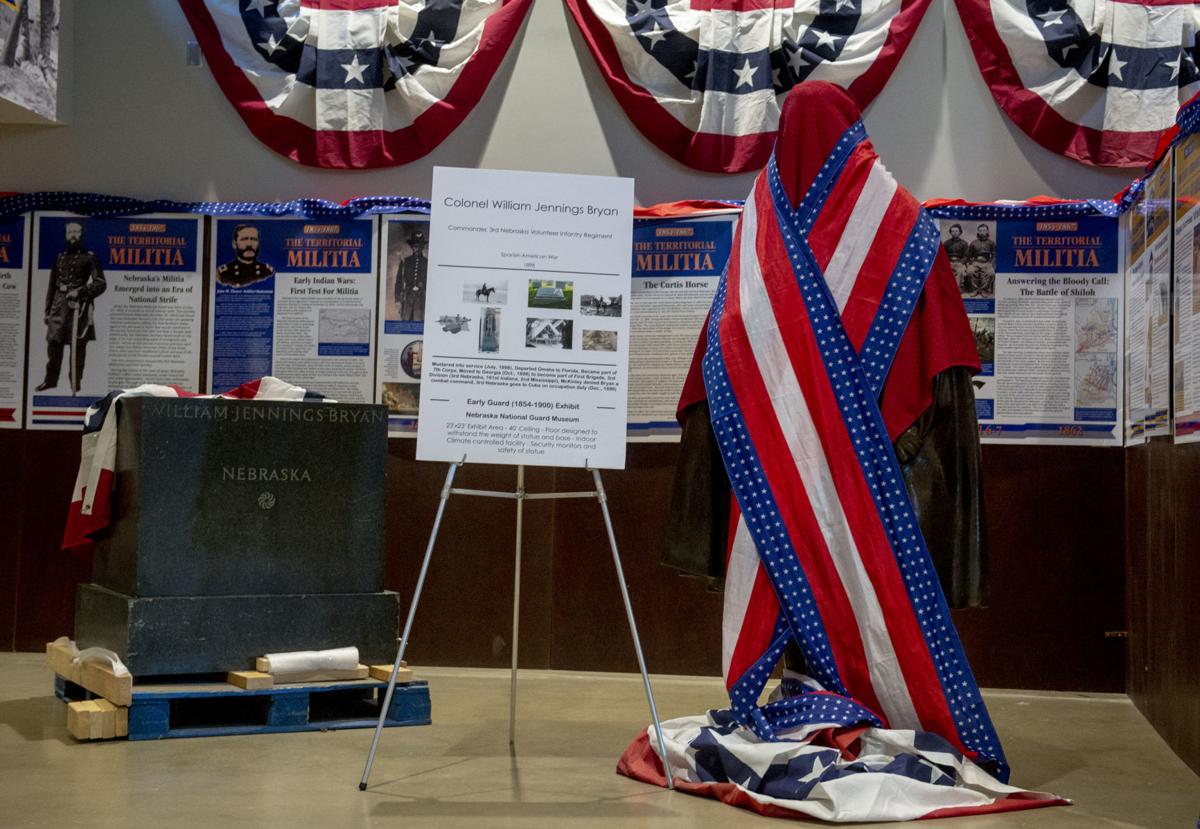 The William Jennings Bryan statue is now housed at the Nebraska National Guard Museum, and spent the past few weeks covered up in advance of Friday's dedication. 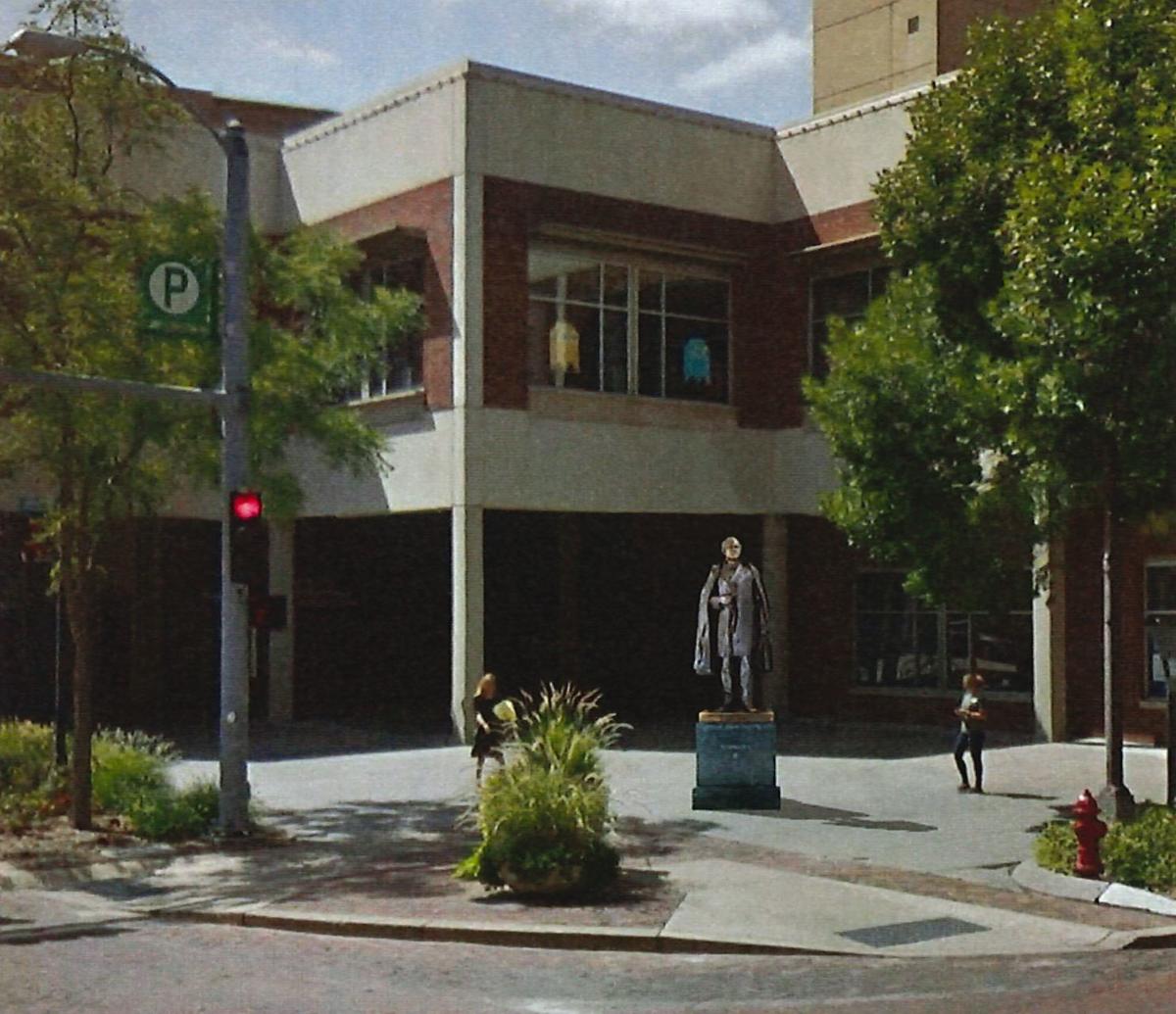 The city of Lincoln suggested Bryan's statue could move to the corner of 12th and O, so he could look across the street at the building that housed his law offices. 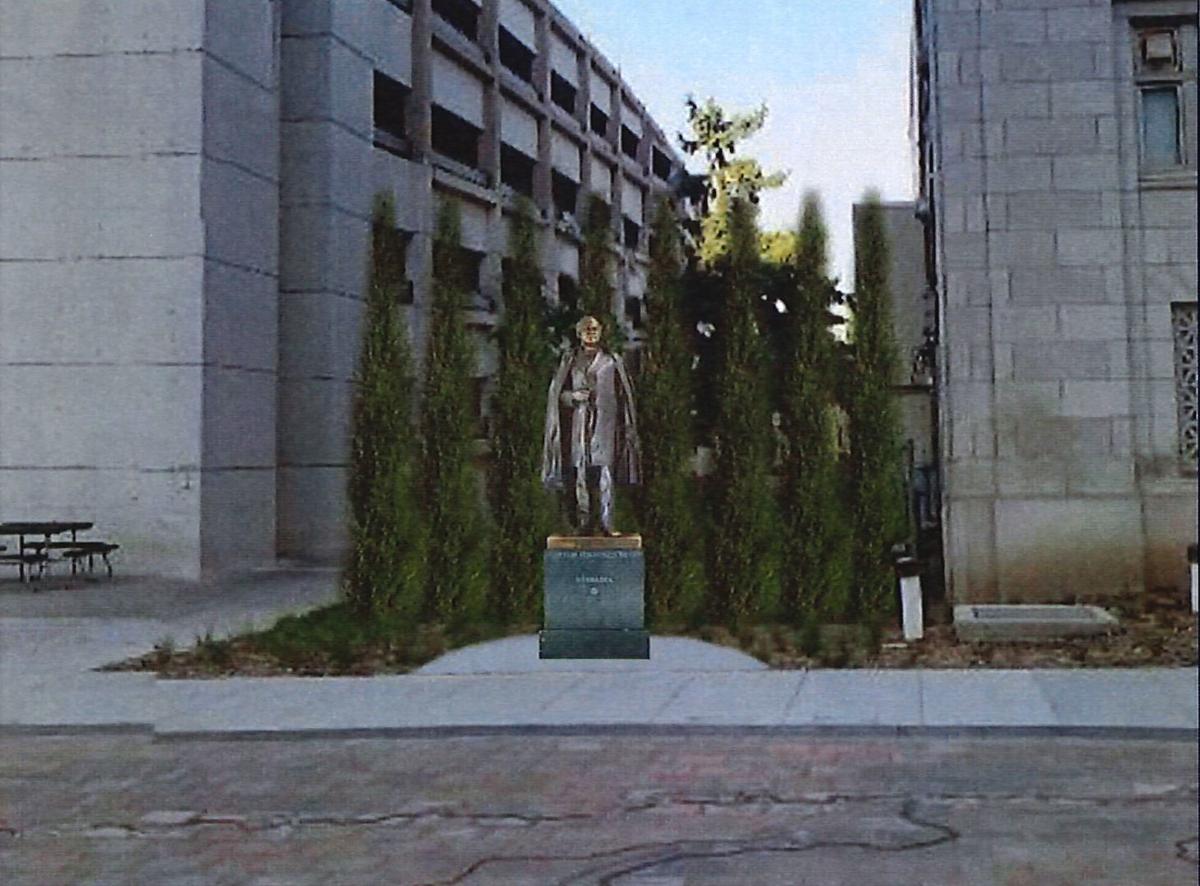 The city of Lincoln’s preferred spot for the William Jennings Bryan statue was on Centennial Mall, between L and M streets. 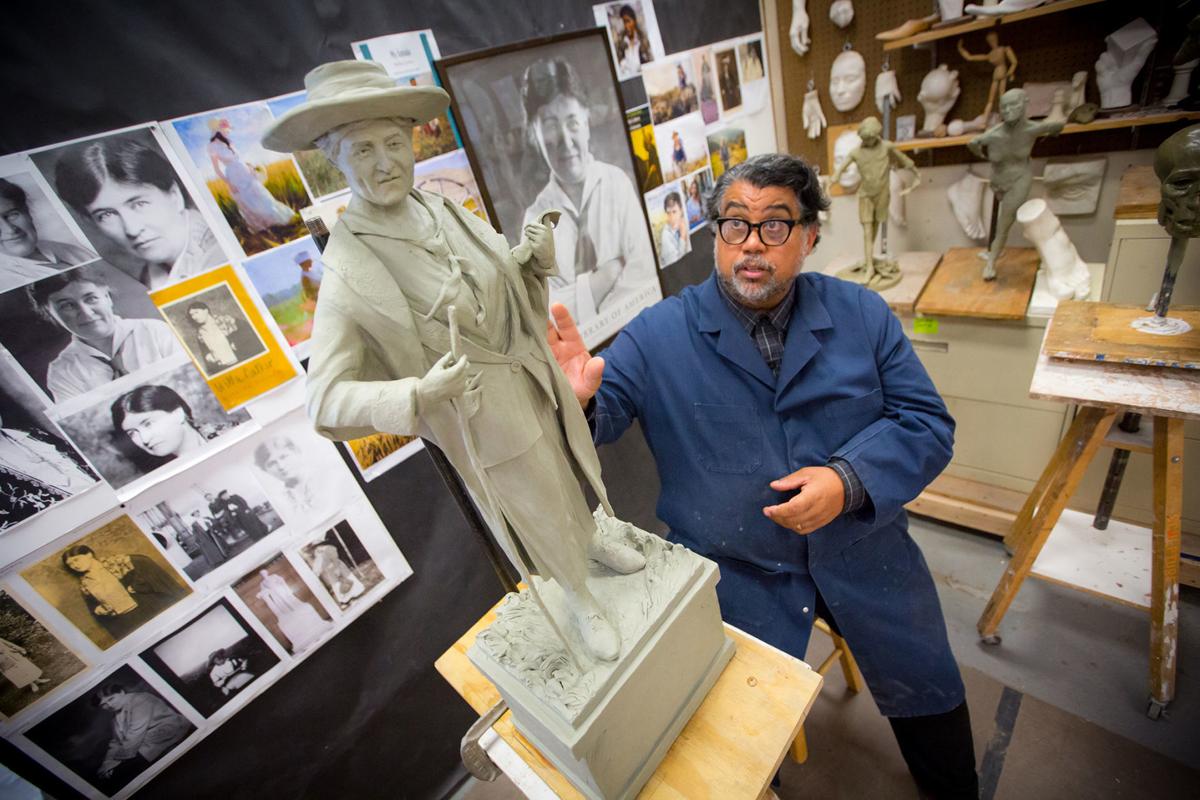 Littleton Alston, an art professor at Creighton University, is creating a 7-foot Willa Cather sculpture for the U.S. Capitol. He's shown here with a model of his sculpture.