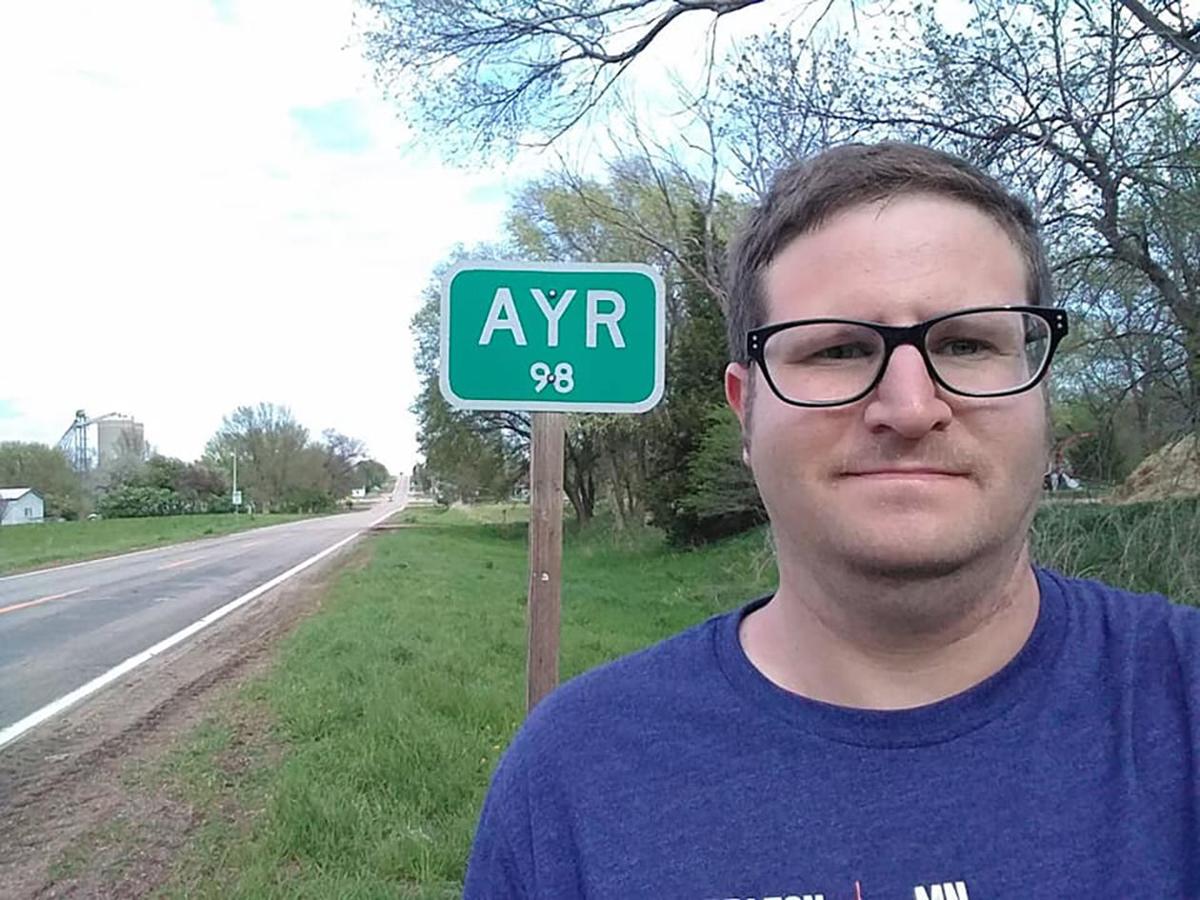 Cody Sperl took a selfie outside of Ayr in his quest to visit and document every town in Nebraska. 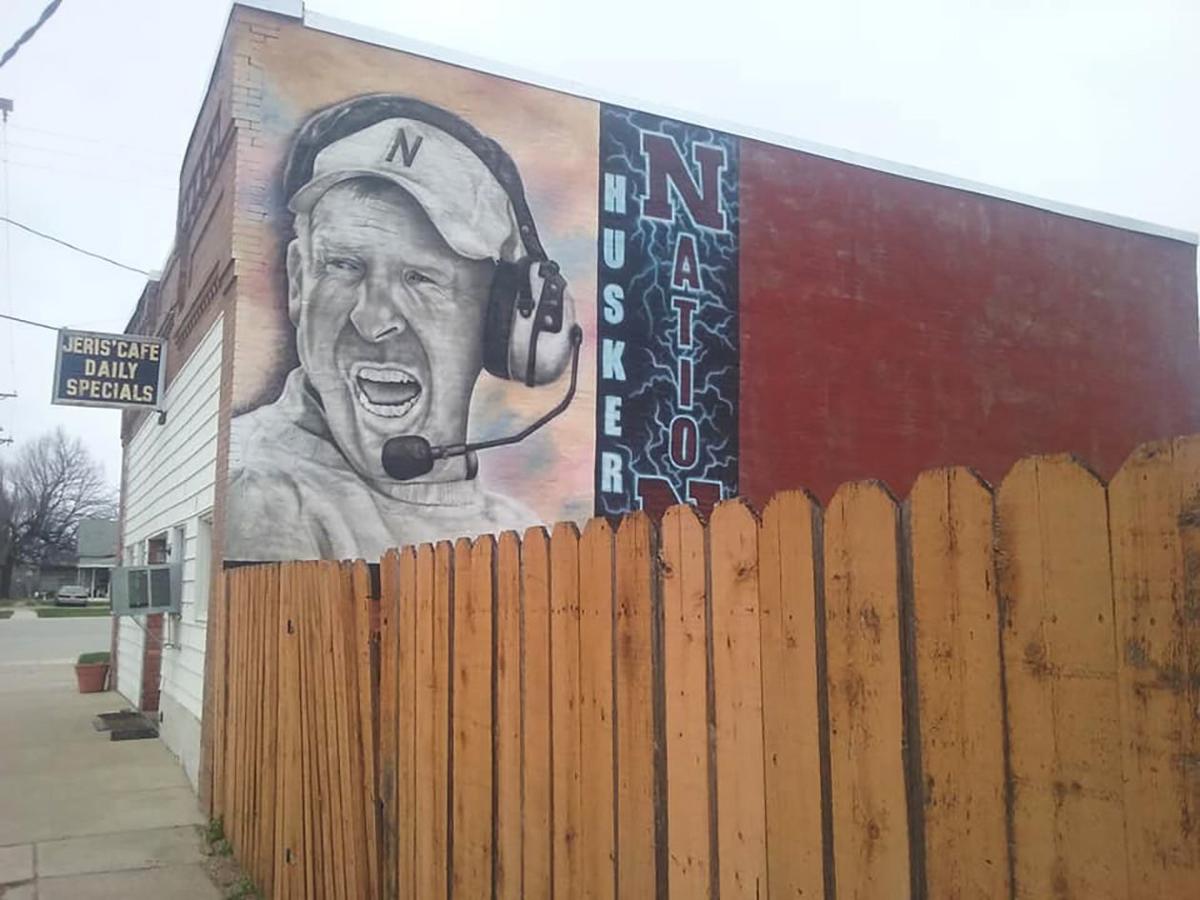 Former Husker football coach Bo Pelini, on the side of a building in Yutan. 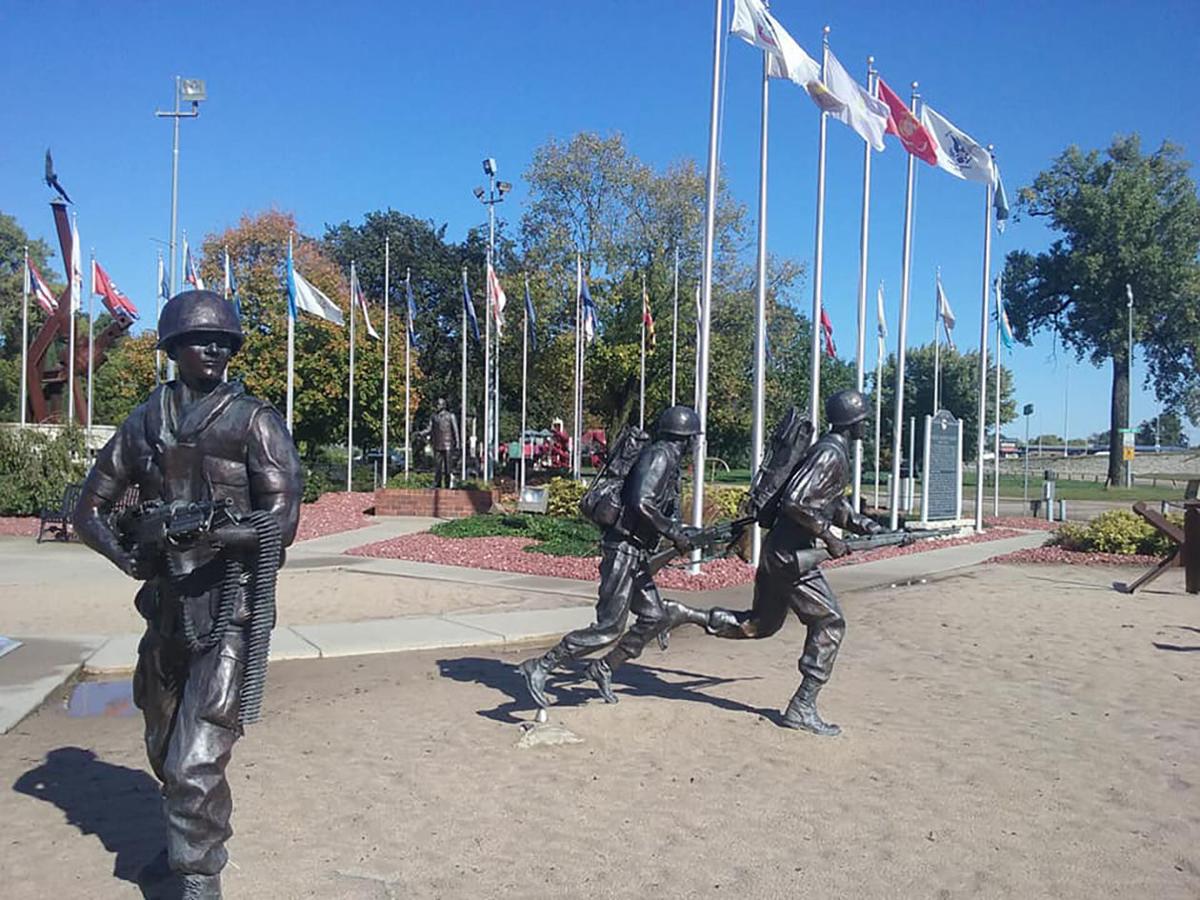 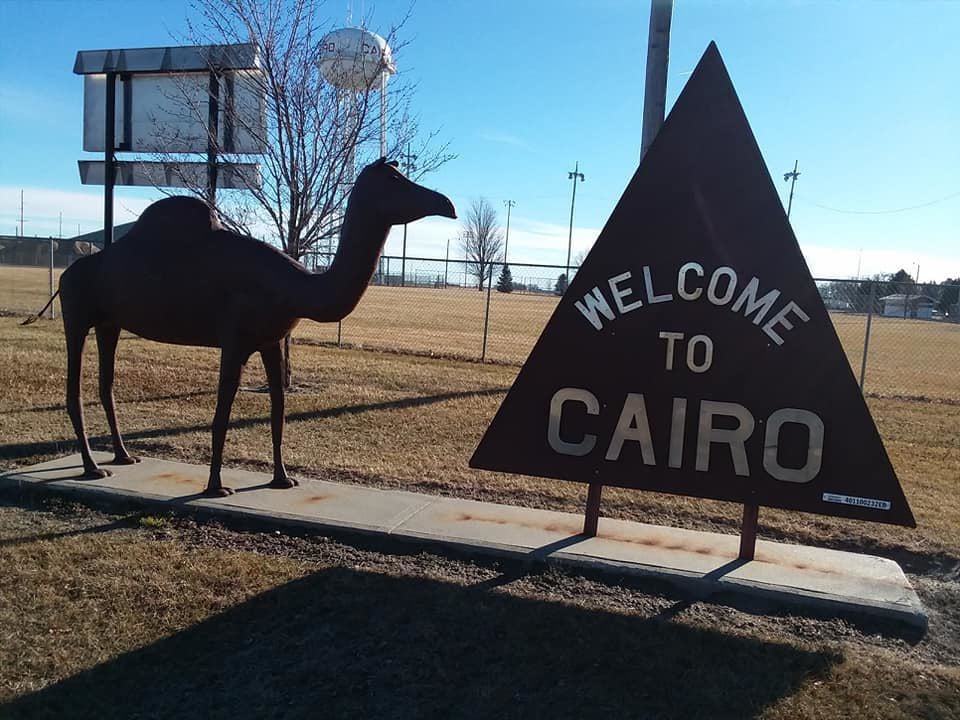 The camel that welcomes you to Cairo. 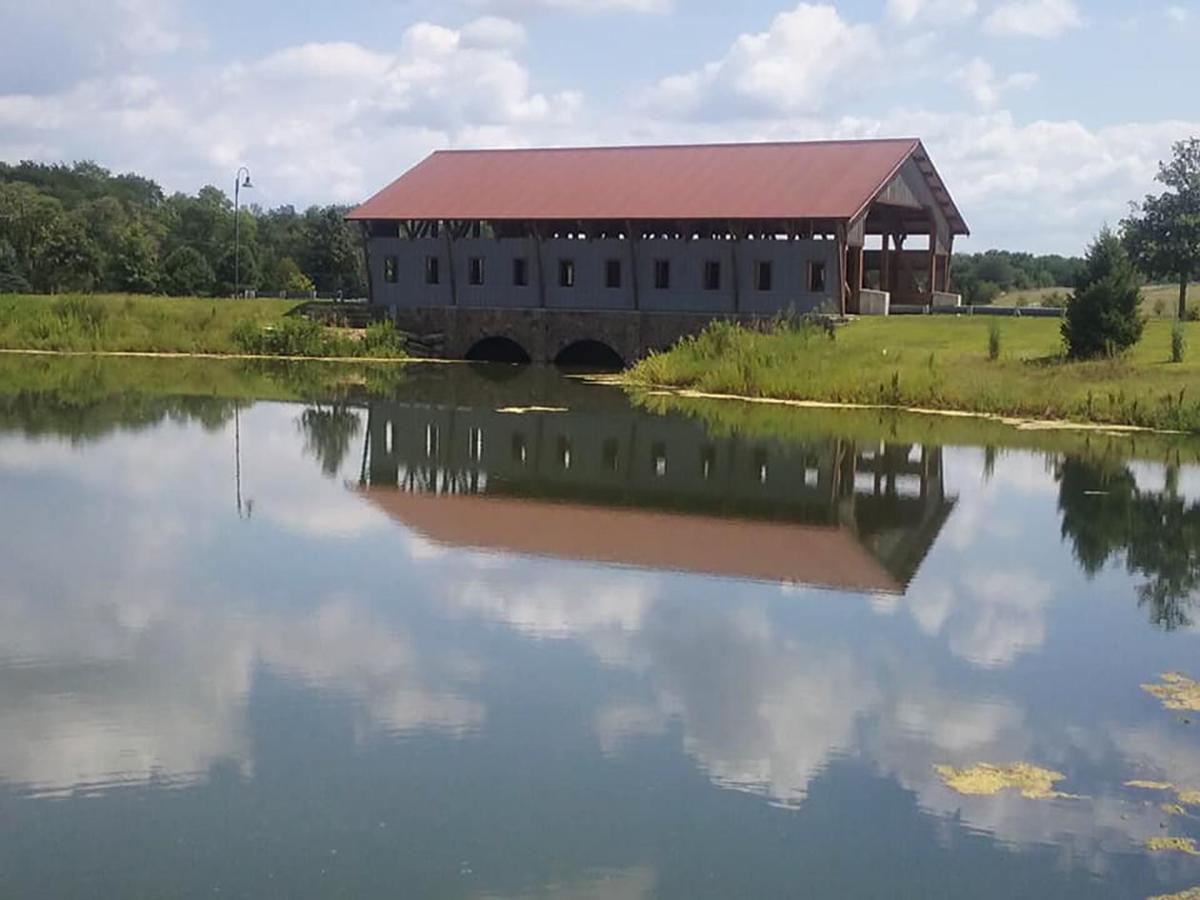 The Bridges, on the southwest edge of Lincoln. 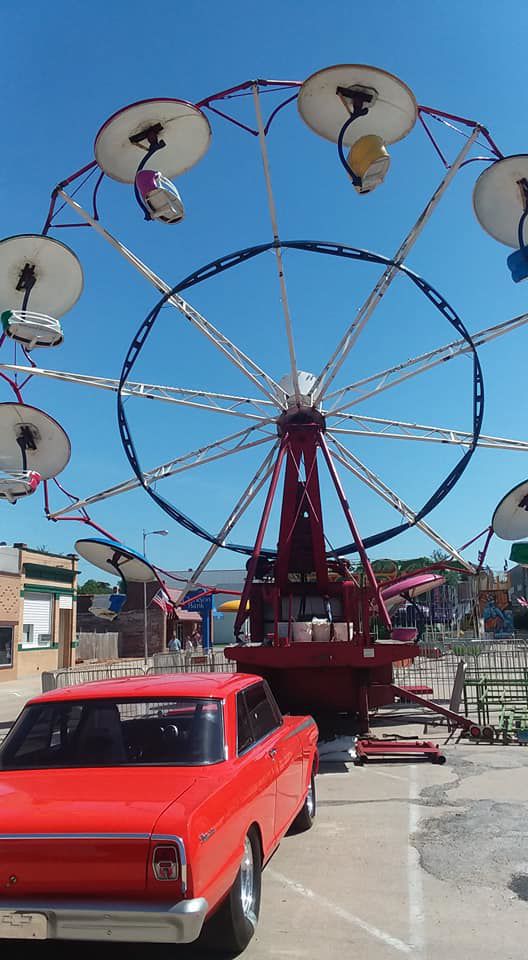 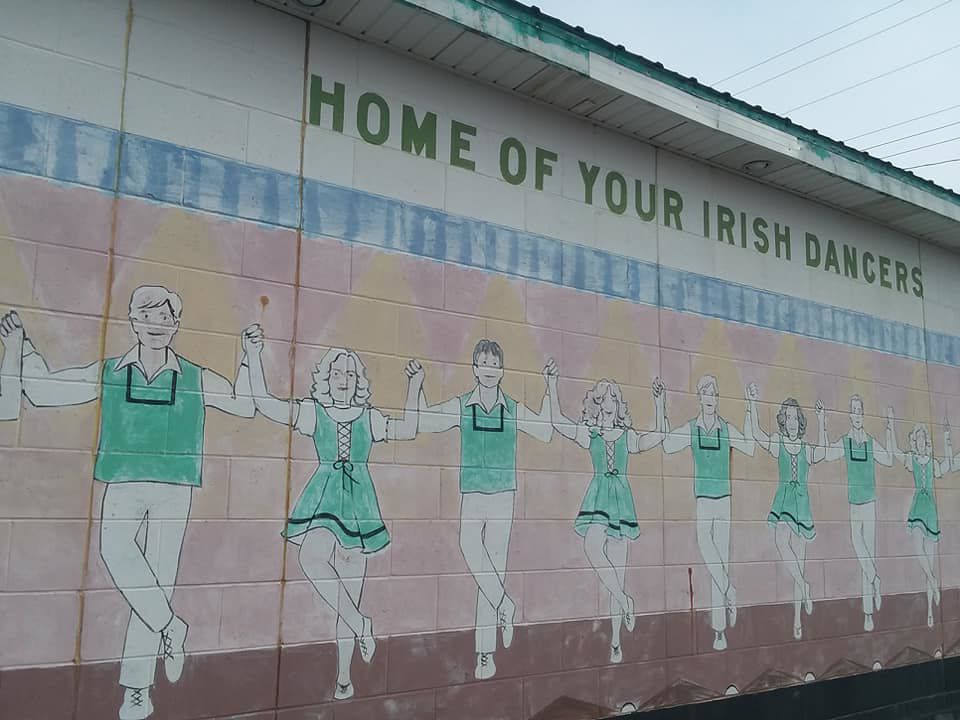 O'Neill, home of the Irish Dancers. 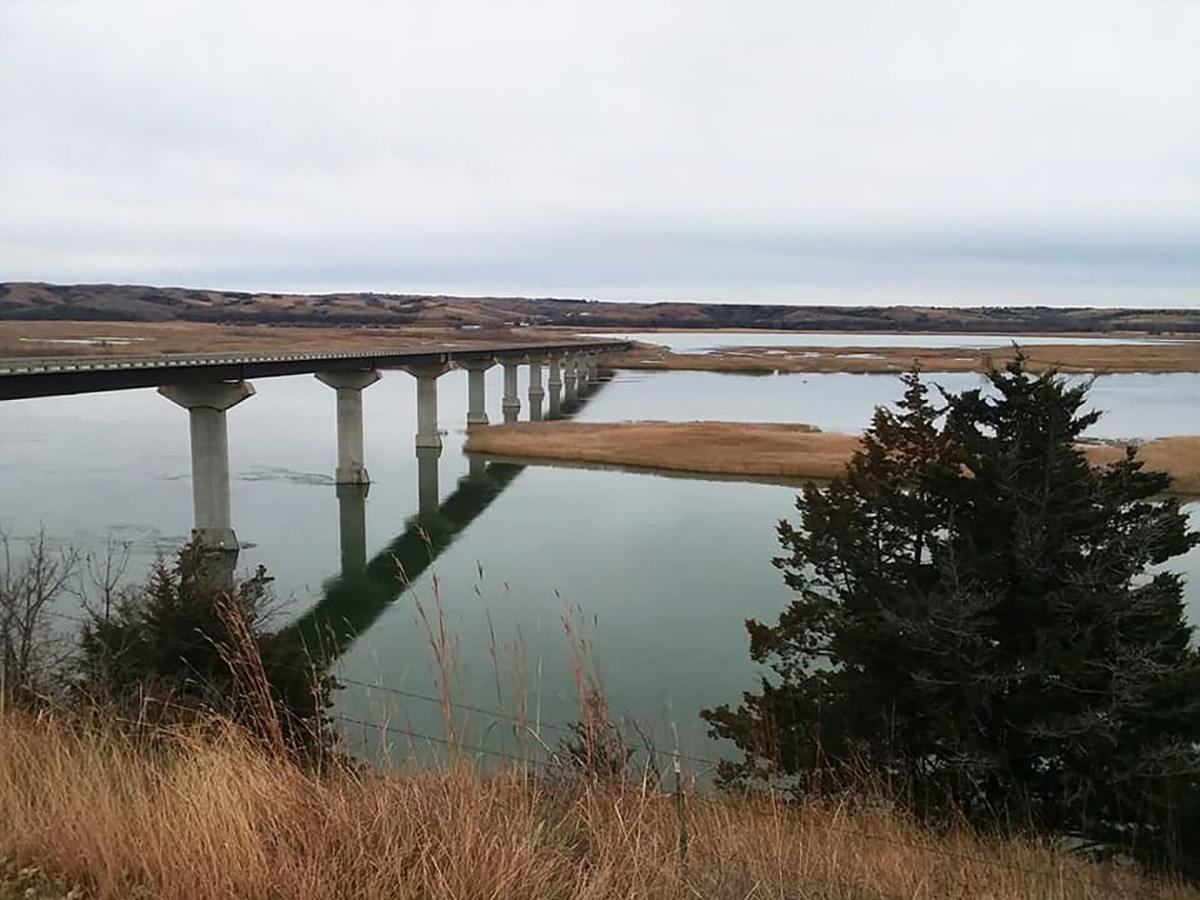 Nebraska 14 starts at the Standing Bear Bridge over the Missouri River, just outside of Niobrara.

Cody Sperl is used to the suspicious looks.

The faces looking out from small-town storefronts or peeking out of post office windows, wondering why a stranger is snapping pictures.

And then he tells them, and the looks change.

“I don’t want to say they think I’m crazy, but maybe just a little out of the ordinary.”

This is what the Stanton native and Wayne State College grad tells them: He’s on a mission, and has been for several years, to visit every incorporated community in Nebraska.

When he has the time and the money, he hits the road in his Toyota with a rough itinerary and some Google research about his destinations — and what they’re famous for — in his notebook.

“I will write down places to visit in these towns. I try to find something unique. A museum or an old opera house.”

Depending on the size of the city, Sperl might take dozens, even hundreds, of pictures. But he always photographs the edge-of-town signs on the side of the highway: Welcome to Curtis. Welcome to Cozad. Welcome to Clarkson and Wilber and West Point. Welcome to Funk and Fairfield, Minden and Maskell.

He finds unexpected gems. The sculpture garden in Oconto, the mill in Champion, the Victorian homes in Superior. But sometimes he visits towns so small they have little to offer. He finds something to capture anyway.

“I’ve been to towns that have 50 people and they don’t have a whole lot. But I’ll take a picture of a bar or a downtown business.”

He returns to his home in Omaha and chronicles his travels on Facebook: Where he went, what to see, when to go. He posts to the Nebraska Through the Lens page with exuberance:

“I'm on a mission of visiting every Nebraska town and I'm not playing games, as I mean it!” (Clarkson.)

“I'm on a mission to visit every Nebraska town and nothing is stopping me!” (Bassett and Long Pine.)

“I'm on a mission to visit every Nebraska town, and I'm sticking to my plan!” (Auburn.)

Each dispatch is routinely met with hundreds of likes and suggested destinations. Go to Callaway, they tell him. And Central City, Eustis, Harvard and Giltner.

His own page — Cody’s Adventurous Travels of Nebraska’s Towns — has attracted 3,600 followers. They like to share their own connections to his travels, that they went to Girl Scout camp near Cozad, or they grew up in Brainard, or their mom was raised in Decatur, or Wisner didn’t even have street addresses when they grew up there, or Hastings is their favorite city, too.

But mostly they thank him for taking them home again, if only through a series of Facebook photos.

And that means something to Sperl, but that’s not the only reason he’s doing this.

He studied geography and sociology in college, but he wants to work in tourism. The part-time Hy-Vee employee has already had a seasonal job with the state Tourism Commission and a part-time job at Mahoney State Park.

He’d like to get hired by a city or county, selling the best of what that part of Nebraska has to offer. And what better way to prepare than to see — and share — the entire state?

“I’ve worked a lot of retail and customer service and they’re not leading me to the job I want to do. I’m really hoping all the towns I visit will reach me to a job as a tourism coordinator.”

The state has nearly 530 incorporated communities, according to the Nebraska League of Municipalities, which gets its information from the state Department of Revenue.

Sperl has documented 371. He figures he’s covered about 90% of eastern Nebraska — where communities are closer, easier to bag in a day trip — but has much of the western half of the state left to travel.

Even then, he’s still behind his younger brother, who has visited more than 400 towns.

All of this started a few years ago, when the two were talking and the idea came up: Wouldn’t it be neat to see every town?

But it’s not a race, Colton Sperl said, and he’s not trying to land a tourism job. The substitute teacher in Kearney was going through a tough time when he started his travels, and the trips were a good way to get out of the house.

And he’s also not sharing his travels in real time, like his brother, the 25-year-old said. “I was going to wait until I was done with everything.”

Lincoln High grad's 200,000-mile road trip not always a walk in the park

The loneliness caught up to him early in his 200,000-mile road trip.

Cindy Lange-Kubick: The Pie Guys on the road in search of a perfect slice of America

The Pie Guys were college roommates who started talking loose and fast about eating pie a dozen years ago.

A 23-year-old man was killed Saturday in an ATV accident in Johnson County, officials said Monday.

FREMONT — While it wasn’t exactly a bull in a china shop, when a black bear decided to let itself into a Fremont family’s SUV during a camping…

Honestly, Nebraska tourism merchandise is available to everyone

Believe it or don't. But it took a state law to get Nebraska tourism merchandise into the hands of the state's adoring fans.

Jerry Penry moved fast. The amateur photographer and aircraft enthusiast got lucky in mid-August, when he snapped a photo of a jet crossing in…

This summer, travelers are marking the 10th anniversary of the Nebraska Tourism Commission's Passport Program by touring the state and collect…

It took three years to digitize and publish online the first 50 years of Nebraskaland magazine.

Cody Sperl took a selfie outside of Ayr in his quest to visit and document every town in Nebraska.

Former Husker football coach Bo Pelini, on the side of a building in Yutan.

The camel that welcomes you to Cairo.

The Bridges, on the southwest edge of Lincoln.

O'Neill, home of the Irish Dancers.

Nebraska 14 starts at the Standing Bear Bridge over the Missouri River, just outside of Niobrara.