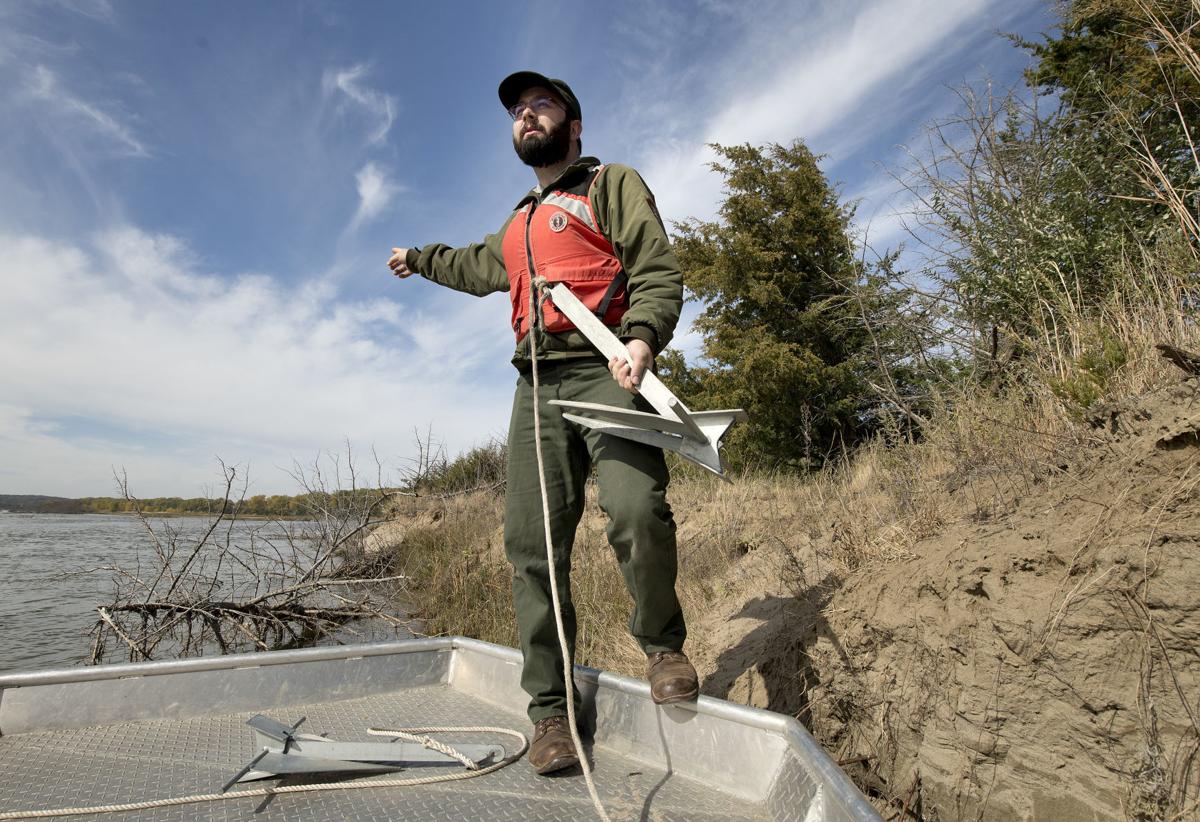 Chris Langland, lead biological science technician for the National Park Services' Missouri National Recreational River, lands a boat on Goat Island in the Missouri River on Oct. 17. A plan for the island that includes primitive camping areas and a trail system has recently been approved. 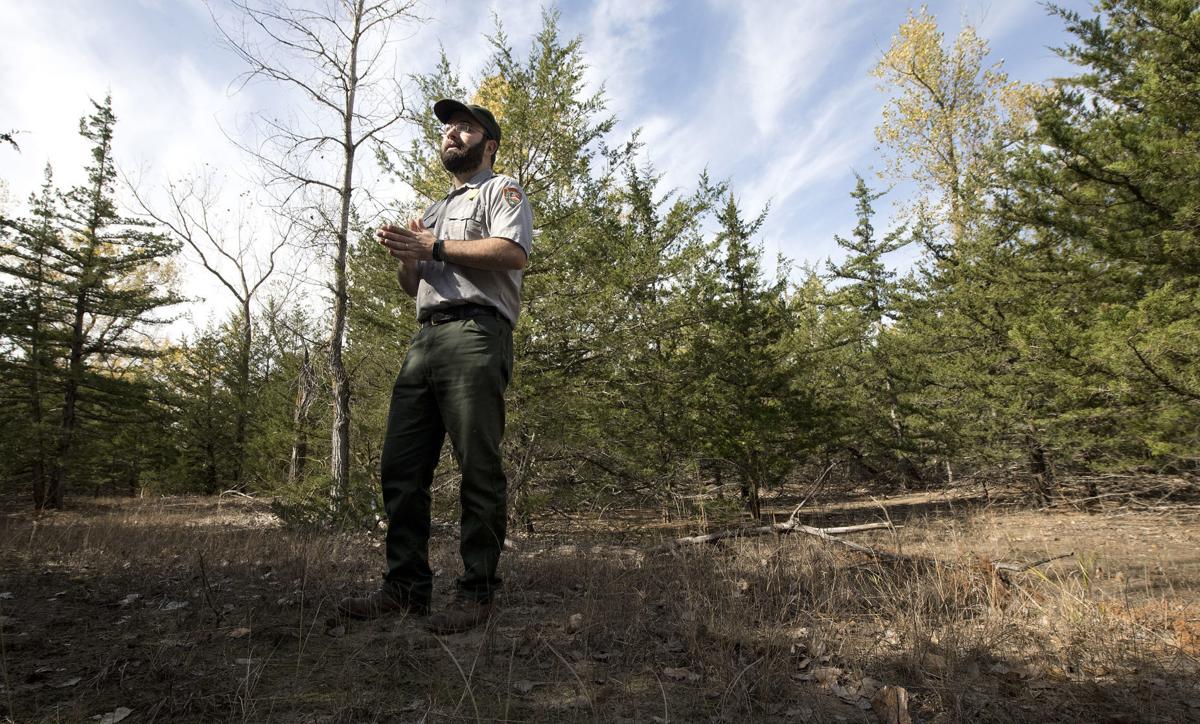 Chris Langland, lead biological science technician for the National Park Services' Missouri National Recreational River, stands in a clearing that marks where trails meet during a tour of Goat Island in the Missouri River on Oct. 17.

VERMILLION, S.D. — Stepping onto Goat Island gives you a feel for what it must have been like for Lewis and Clark when they explored the Missouri River valley more than 200 years ago.

Leaves on full-grown cottonwood trees rattle in the breeze. Dried grass and fallen twigs crunch beneath your feet. Deer tracks are imprinted in the sandy soil.

You're left to enjoy the sounds of the wind and the birds while feeling isolated from the outside world.

"I think it's a unique representative area that provides an experience you can't get anywhere else," said Rick Clark, superintendent of the Missouri National Recreational River in Yankton, South Dakota, the office that oversees Goat Island.

Three miles long and a quarter mile wide at its widest point, the approximately 700-acre island splits the Missouri River channel southwest of Vermillion. Clark said it's likely that the island has been around for more than 200 years. There's no mention of it in Lewis and Clark's journals, but the island's environment is similar to what the pair would have encountered when exploring the river.

"If there's not a greater tie to the historic use of the river, I don't know what it is. We've got American history right here," said Chris Langland, lead biological science technician with the Park Service.

As legend has it, the island got its name because of the goats Jack Jaquith once raised on it. Some local residents also knew it as Jake's Island after Jaquith, an attorney from Vermillion. In addition to goats, farmers at one time grazed cattle here. An old tractor and abandoned windmill on the island provide evidence of the past agricultural uses.

Now, it's all recreation. Goat Island sits in the midst of the designated Missouri National Recreational River, a stretch that resembles the wide, meandering, sandbar-filled channel that was the Missouri before the U.S. Army Corps of Engineers built dams to the north and channelized it to the south. With that national designation, the Missouri is a popular spot to canoe and kayak. Goat Island is a convenient stop for boaters and kayakers. Some pitch a tent for the night. Local residents come out to spend the day hiking or enjoying the sandy beaches.

"If you check social media, you see postings all the time from people that are using it," Langland said.

For years, no one was sure if the island belonged to Nebraska or South Dakota, so its potential was never reached. After the Park Service took over management three years ago, workers have scoured every foot of the island, finding paths left by all-terrain vehicles leading to hunting stands and areas in which visitors had camped.

The Park Service plans to enhance those features while maintaining the island's primitive state.

"We're not trying to turn this island into something it hasn't been," Langland said.

A plan approved in August by the Park Service in cooperation with representatives of South Dakota Game, Fish and Parks and the Nebraska Game and Parks Commission, calls for converting some of those ATV paths into hiking trails and connecting them. Two primitive campgrounds -- emphasis on primitive -- with up to five campsites each are in the plans. Small clearings tucked away in remote areas offer perfect individual campsites that won't be developed.

Archery-only deer and turkey hunting will be allowed. The only approved use of firearms will be for waterfowl hunting on the island's perimeter. Motorized vehicles will be prohibited.

Some development is expected to begin next year and will take a few years to complete. Plans could change once Park Service staff see how people use the island. The possibilities are exciting to consider, Clark said.

"Not many people have the good fortune of having a place the stature of Goat Island come into the public domain," he said.

Langland said people who have never visited Goat Island are in for a treat if they choose to take advantage of its unique environment.

"We've been all over. It's really neat because you just find stuff," he said. "All it takes is a couple hours out here and you'll be hooked."

Up for auction: 6,000-square-foot fixture on Johnson Lake

Chris Langland, lead biological science technician for the National Park Services' Missouri National Recreational River, lands a boat on Goat Island in the Missouri River on Oct. 17. A plan for the island that includes primitive camping areas and a trail system has recently been approved.

Chris Langland, lead biological science technician for the National Park Services' Missouri National Recreational River, stands in a clearing that marks where trails meet during a tour of Goat Island in the Missouri River on Oct. 17.