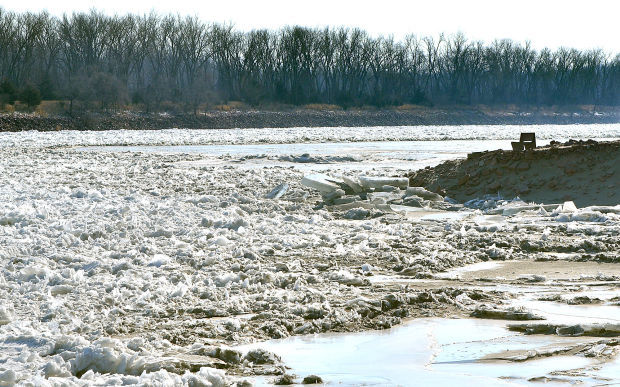 Ice is shown on the Missouri River near the RiverTime Resort near Ponca on Thursday. 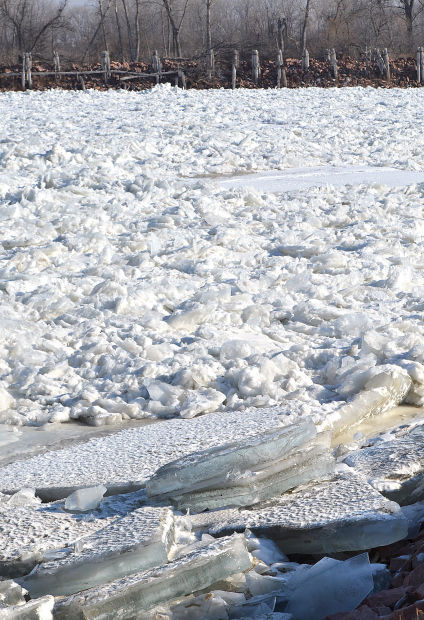 Ice is shown on the Missouri River close to the RiverTime Resort near Ponca on Thursday.

SIOUX CITY, Iowa -- An ice-covered portion of the Missouri River near Ponca has caught the attention of emergency officials, but for now the frozen chunks don't pose a threat.

"It's something we're monitoring. It's nothing we're alarmed with at this point," said Gary Brown, Iowa's Woodbury County Disaster and Emergency Services director.

Warmer temperatures expected this weekend could change that. Ice could break up and begin floating downstream. If ice chunks catch on something -- a sandbar, bridge or bend in the river -- they can jam the channel and cause water to back up behind the ice.

Brown said he can't remember that happening in the Sioux City area in his 32 years on the job, though jams farther downstream have caused flood damage in Woodbury County.

"Generally, my experience is it pushes through," he said.

During the U.S. Army Corps of Engineers' first Missouri River Basin Outlook teleconference of the year on Thursday, Jody Farhat said that the river iced over on Dec. 29-30, and within hours flows through Sioux City dropped from 7 feet to 4.8 feet. Those flows have returned to near normal because water is flowing beneath the ice.

"The ice is now stable. There is some water backed up behind it," said Farhat, chief of the corps' Water Management Division in Omaha.

Shea Scollard, Dixon County emergency director in Ponca, said he hadn't heard of any flooding concerns from county residents along the river.

"Normally, I don't get a phone call until it's going to be a threat," he said.

Farhat said the corps plans to take aerial photos of the ice-covered river next week.

"We have had a lot of ice in the river this year," Farhat said, because of below-normal temperatures.

As a result, water releases from Gavins Point Dam near Yankton, S.D., have been above the targeted flow of 12,000 cubic feet per second so that downstream water intakes remain below the water surface.

Mike Swenson, team leader in the corps' Missouri River Basin Water Management office, said releases at Gavins Point were at 15,000 cfs on Thursday. The corps hopes to gradually lower releases to 12,000 cfs in the next several days.

The corps continues to enact water conservation practices as a result of the 2012 drought. Runoff in 2013 was near normal but was not enough to fill up reservoirs, some of which are 5 to 11 feet below desired levels.

An abnormally wet fall in much of Montana and the Dakotas and above-normal mountain snowpack thus far have led to forecasts of 26.1 million acre-feet of runoff for 2014. Normal runoff is 25.2 million acre-feet, according to a news release issued in conjunction with the teleconference.

Because of low reservoir levels, the system has an extra 6 million acre-feet of storage capacity to hold spring runoff, Farhat said.

"The risk of snowmelt-induced flooding is low," Farhat said, though lowland flooding along the river is always a possibility during times of high precipitation in the spring.

How cold is it? Lincoln ranks 7th coldest in nation

Lincoln is colder than Buffalo. Colder than Detroit. In fact, the Weather Channel is calling Lincoln the seventh coldest city in the United States.

Ice is shown on the Missouri River near the RiverTime Resort near Ponca on Thursday.

Ice is shown on the Missouri River close to the RiverTime Resort near Ponca on Thursday.