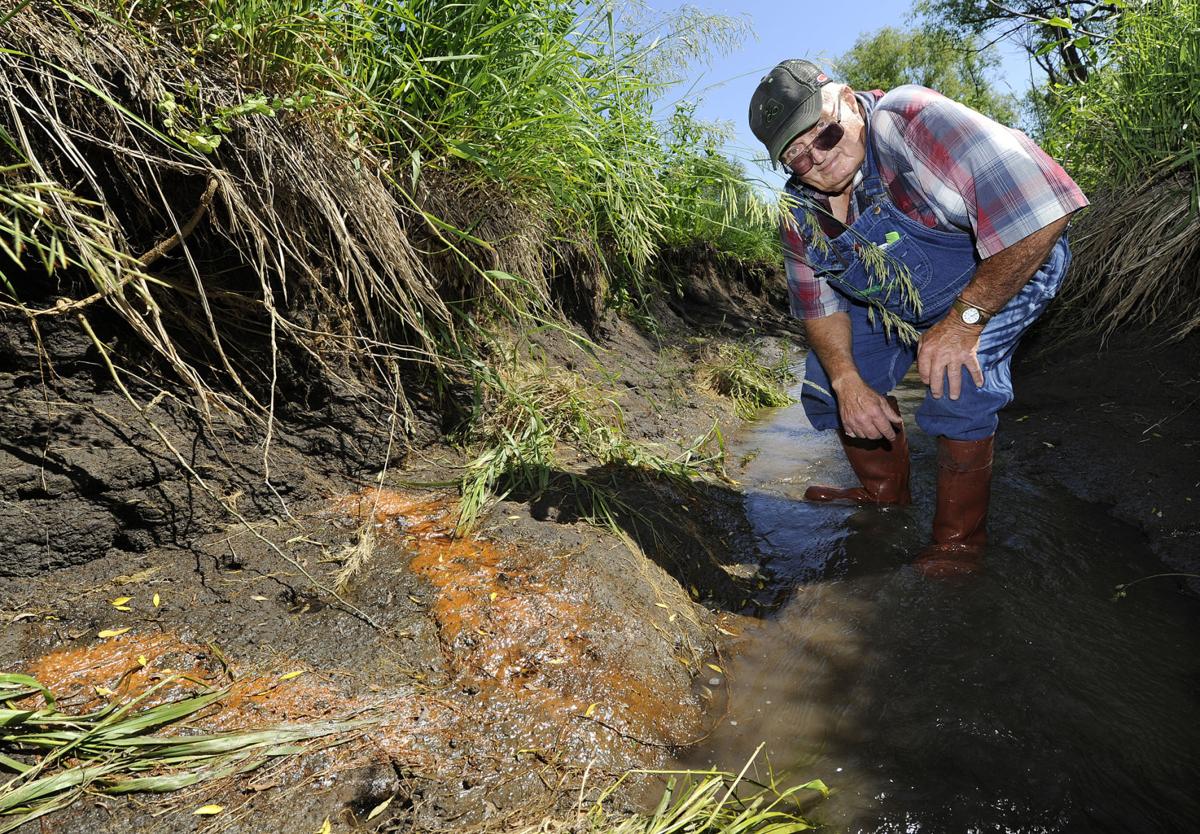 Alvin Simon shows off what he believes to be oil seeps near a stream on his farm in Richardson County. 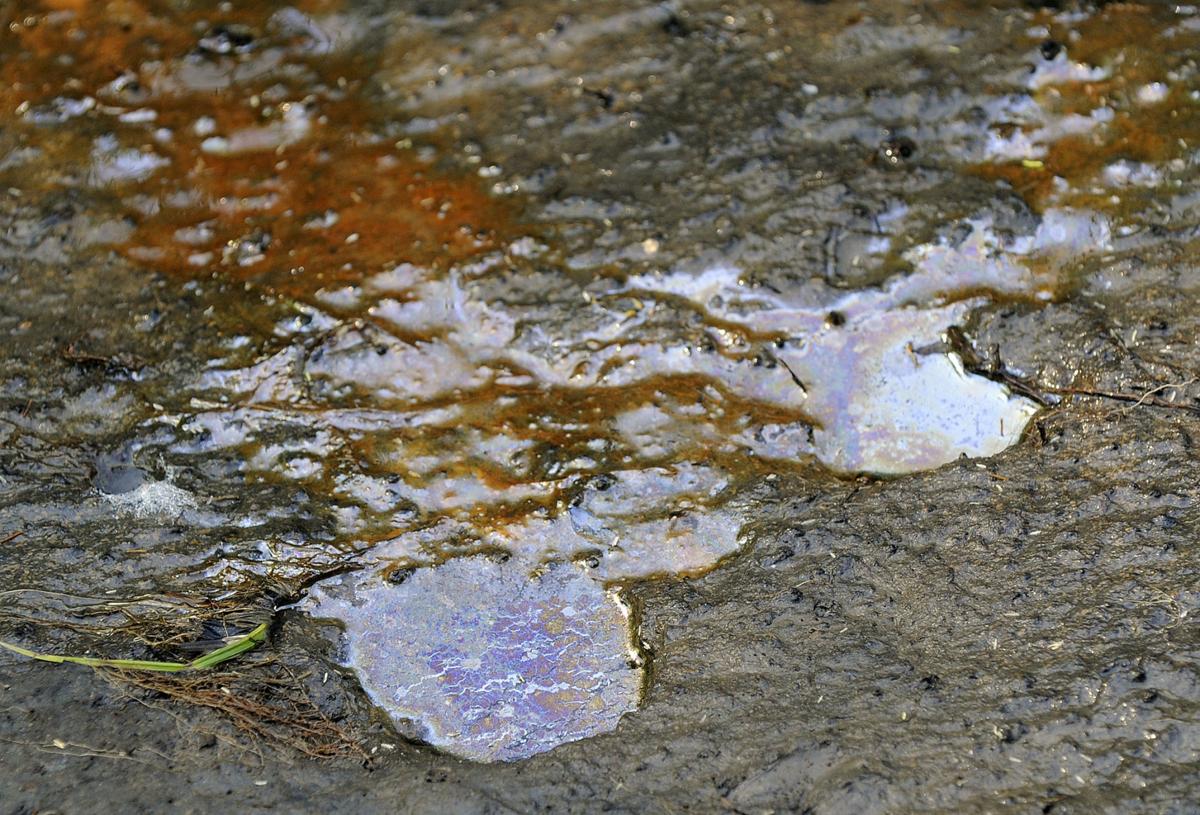 Reflecting a rainbow sheen, an oil substance seeps from a stream bank on Alvin Simon's farm in Richardson County. 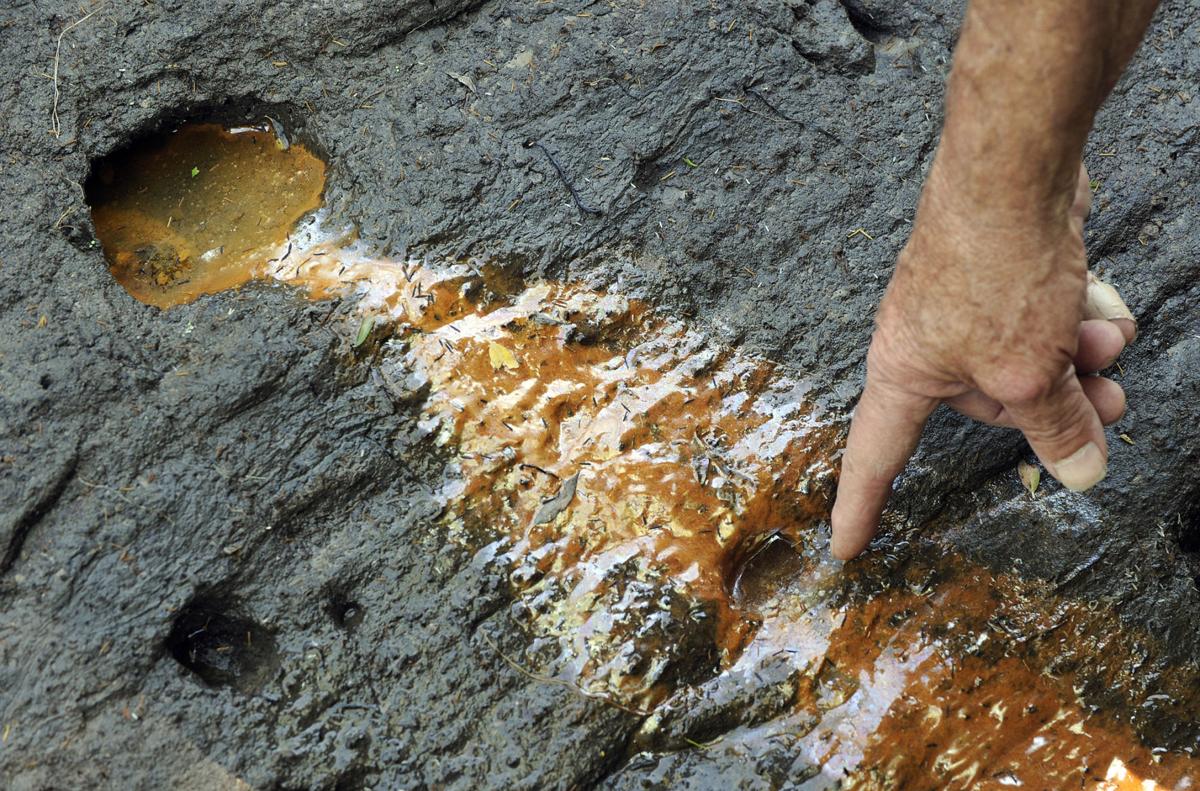 Alvin Simon touches one of the oil seeps lining a small stream on his farm in Richardson County.

A Richardson County farmer is hoping to harvest a different kind of crop -- the oil oozing out of his land.

“Some people around here think I’m drinking my own bathwater,” Alvin Simon said this week from the farm where he grew up.

But it's there on his 160 acres northwest of Falls City: An oily substance seeping out of the banks of the creek, leaving a sheen beneath the tall grass of a marsh, making him wonder if there is, indeed, a “river of oil” to be found underground, as local legend has it.

He's known about it for decades. He thought about acting on it 20 years ago but put the land in the Conservation Reserve Program instead.

“I kind of walked away from it," he said. "I got busy with other stuff.”

Before he did, though, he had his land tested. In 1994, Orion Geophysical Consulting of Lakewood, Colorado, told him it didn't find high enough levels of petroleum to warrant further investigation.

But Orion also said that didn't mean there wasn't the possibility of oil and gas pools in deep formations.

When the heavy rains came this spring, the oil started showing up all over his place, Simon said.

But it's not unheard of.

"Anything’s possible," said Bill Sydow, executive director of the Nebraska Oil and Gas Conservation Commission. "It’s possible there’s an oil field down there and for whatever reason it’s just leaking, or it’s been leaking for a long time and nobody’s ever noticed it."

Sydow has heard of oil seeps on the banks of the Republican River, in a county without oil production. And some of the nation's earliest oil fields were discovered because of crude coming to the surface. Westward pioneers, for instance, used to grease their wagon wheels at a tar pit that became Wyoming's first oil well.

There are records of dry holes near Simon's land but no history of drilling on it, Sydow said. So the oozing oil isn't a remnant of past production. And there are no pipelines in the area that could have broken.

Sydow, too, said this spring’s heavy rains could have played a role in its appearance.

Runoff traveling toward the water table would displace any crude creeping up. Oil is lighter than water, doesn’t dissolve in it, and would float to the top. In fact, drilling crews sometimes inject water into oil deposits to maximize production.

Sydow spoke to Simon a few days ago. He told the farmer to check for natural gas by putting a funnel upside down on a seep and an empty pop bottle on top of that. Then he could try to light any gas the bottle collected.

Simon could also collect a sample of the oil to get it tested at a lab, he said, because it could be worth something.

As the most recent spike drove prices to above $100 a barrel for the best West Texas crude a year ago, there were reports of some Richardson County residents with shares in local wells collecting six-figure annual royalty checks. The price of oil dropped to about $50 and has bounced back to $60.

Simon is talking with oil companies, inviting them to take a look at his land.

He could use the money to restore his family farmhouse, he said, and to pave the road to the church.

“I’m going to get somebody to drill and start drilling. I’ve got some oil people interested.”

Farmers are finding a wide range of yields as combines roll across Nebraska’s wheat fields.

First came the oily seeps, bubbling up into Alvin Simon’s bean field this spring and trickling out of the creek beds that cut through his Rich…

Alvin Simon shows off what he believes to be oil seeps near a stream on his farm in Richardson County.

Reflecting a rainbow sheen, an oil substance seeps from a stream bank on Alvin Simon's farm in Richardson County.

Alvin Simon touches one of the oil seeps lining a small stream on his farm in Richardson County.