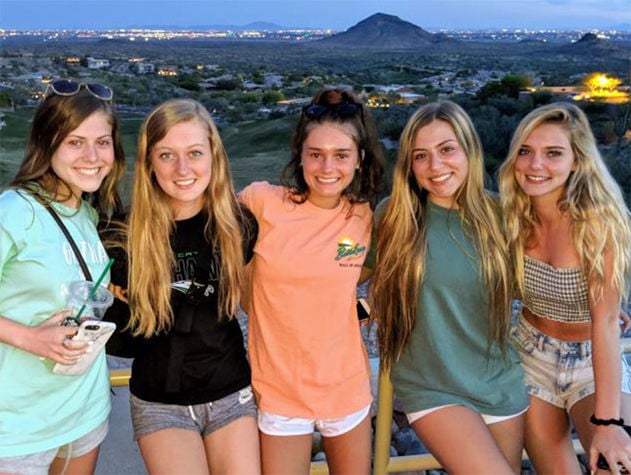 A makeshift memorial appeared along Platteview Road, just west of Springfield, to mark the scene of an accident that killed four students at Gretna High School and injured a fifth last month. Law enforcement cautioned people from congregating in the area where it's not safe along a busy two-lane road.

GRETNA — The Gretna school district is carefully trying to honor the memories of four high school students killed in a car crash without extending the grieving process.

Four girls who were expected to begin their junior years this fall at Gretna High School were killed June 17 when the car they were in crashed off a rural road just more than 3 miles west of Springfield. The car was in flames when first responders arrived.

Handmade memorials have cropped up in the high school parking lot. The students who have worked on the memorials want some to last at least long enough for Roan to see when she's released from the hospital.

"Bringing everyone together and doing something to remember them helps us grieve and memorialize them," said Morgan Ehlert, a junior-to-be who worked on one of the displays.

Connie J. Schnoes, a pediatric psychologist at Boys Town Center for Behavioral Health, told the Omaha World-Herald that public memorials are not the only or the healthiest way to mourn. She said the message imparted to kids is that only if you're important enough and have many friends are you going to have a grand display.

"It also makes me get concerned from a different standpoint: that if I don't feel important now and I die, maybe then I'll feel important," Schnoes said.

Gretna Superintendent Kevin Riley said administrators have talked to students and the girls' families about finding other ways to honor the four girls. Ideas include creating scholarships, planting trees or installing a memorial bench.

"We have to move out of the grieving process" at some point, Riley said. "That's what's healthiest for our kids."

Gretna crash victims identified: 'Our collective heart in our community is shattered'

SPRINGFIELD — Authorities say four teenagers, all students at Gretna High School, died after the car they were in crashed off a rural road nea…

The lone survivor of a June 17 crash that killed four Gretna High School classmates is out of a Lincoln hospital.

A car crash in a Washington County farm field Friday morning left a 14-year-old girl dead and five others hospitalized.

Officials to hold news conference on Nebraska crash that killed 4

The parents of four Gretna High School teenagers who were killed in a crash last year have filed a tort claim against Sarpy County, alleging t…

A makeshift memorial appeared along Platteview Road, just west of Springfield, to mark the scene of an accident that killed four students at Gretna High School and injured a fifth last month. Law enforcement cautioned people from congregating in the area where it's not safe along a busy two-lane road.