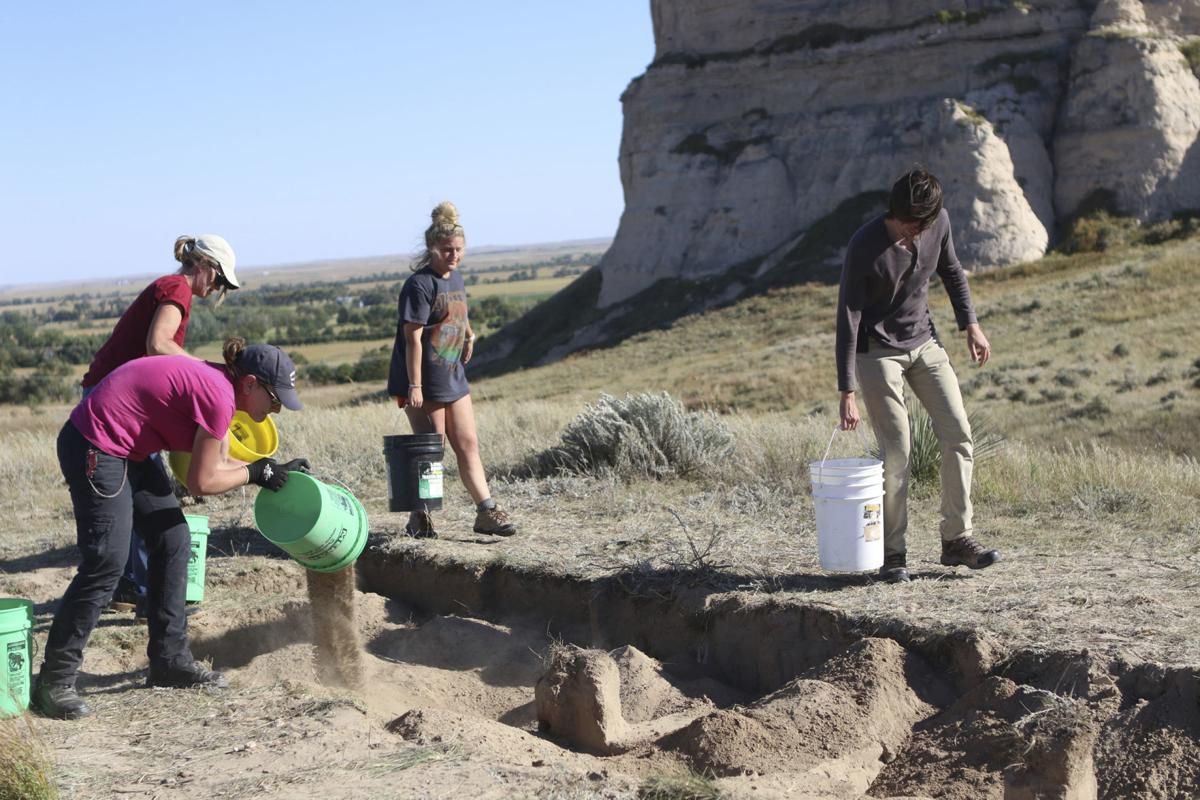 Volunteers move dirt back into a hole at the History Nebraska excavation site near Courthouse Rock in Bayard. It was a chance for members of the community to join archaeologists in trying to uncover missing pieces of the region's past. 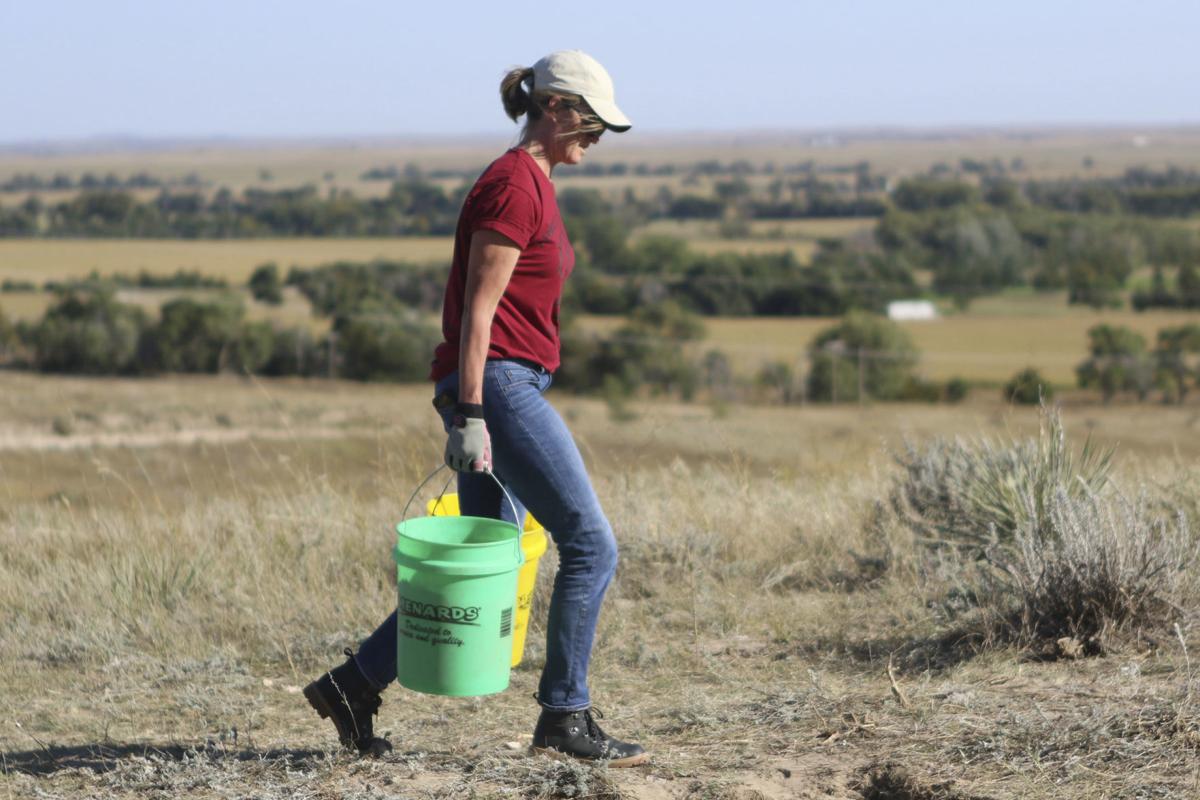 Kirsten Huddleston carries buckets across the field next to Courthouse Rock during History Nebraska's public excavation in celebration of Nebraska Archeology Month. Huddleston had wanted to attend an excavation a couple years ago, but couldn't make it. She jumped at the chance to participate this year.

BAYARD — Courthouse Rock was bustling last week as nearly 30 people worked to excavate a Native American site near the formation. The dig was put on by History Nebraska in honor of Nebraska Archaeology Month.

It was a chance for members of the community to join archaeologists in trying to uncover missing pieces of the region's past.

Few locals attended the event, but a number of out-of-towners drove for hours for the chance to excavate the site.

Many of them made the trip from Lincoln. Among those travelers was Kristen Huddleston.

"I wanted to do this a couple years ago, but I had a trip to somewhere else that day," Huddleston said. "When I heard about this one, I decided to come out."

Eric and Stacey Severson likely had the longest trip, traveling from Altoona, Wisconsin, to Bayard for the dig.

The couple traveled to Fort Robinson for last year's excavation as well.

The Seversons turned up a few exciting finds, including some pottery shards, a knife point and an end scraper.

"That is a hide tool," said Nolan Johnson about the scraper. "We also found lots of stone flakes or pieces that were knocked off when they were making tools."

Johnson is an archaeologist with History Nebraska.

The crew also turned up bone fragments, some of which were burned. The largest bones came from bison and included a humerus and ribs.

The end of the humerus was smashed open.

"People did that a lot with long bones," said Johnson, explaining that they were after the bone marrow inside of it. "It was really high in calories."

The fact that some of the bone fragments were burned tells Johnson that the people who once occupied the space were likely cooking there.

He had initially hoped to turn up a hearth at the site, but the crew didn't have any luck.

"We didn't find anything intact, but that doesn't mean it's not out there," said Johnson. "It's a huge site and we excavated very little of it. We know they had to burn these somewhere."

Johnson said it's not unusual to only find a few bones rather than a complete skeleton. He said if the site is a kill site, archaeologists are more likely to find complete skeletons because the animal was killed, processed and butchered in one spot.

"Our site was so far up that I don't think they killed bison up there," said Johnson. "I think they killed them somewhere else and basically took the good parts up there. That might be why we're finding certain kinds of bones."

Johnson said he could be wrong, but he felt it was unlikely that bison would be grazing at the site because of its elevation.

Johnson said that pottery and three projectile points found at the site helps confirm that it was most likely a Dismal River site.

According to Johnson, the Dismal River sites were places utilized by a group of Native Americans who lived in Nebraska from around 1550-1750 AD.

"They're Plains Apache folks," said Johnson. "They lived in Nebraska, Kansas, Colorado and Wyoming before they moved down into the southwest."

There are multiple Dismal River sites in the state, including big villages where structures have been located.

"I think the site we were at was more of a hunting camp or some kind of special use site," Johnson said. "I don't think they would live up there. The wind would blow them away."

He said the excavation turned up a number of different rocks, including obsidian flakes. This is unusual because there are not obsidian outcrops in Nebraska.

"We hope to send them off and get them sourced," Johnson said. "They'll be able to tell us where the rock came from, which tells us where people were getting their tools. We can compare that to other Dismal River sites."

Knowing more about the rocks will help historians piece together where the Native Americans who used the site were getting their tools.

Knowing where they conducted their trading will give more insight into the path that the nomadic tribe followed as they moved through the area.

Although the area that was excavated wasn't large, Johnson said it was thick.

"We ended up excavating 14 one by one meter squares," Johnson said. "The deepest we got down to was about 85 centimeters. We were finding stuff all the way down to that level. It was surprising."

The next step is washing and cataloging all of the artifacts that they turned up.

"It's my job to write an excavation report about the site and our work," Johnson said.

He said they will try to identify all of the bone fragments that were discovered and attempt to determine where they came from. They will also examine the shards of pottery and compare it to other dismal river sites.

He said that in the lab, they will be able to recreate the excavation site and take a closer look at which objects were found in which area.

"We'll be able to learn a little more about how the site is laid out," Johnson said. "If we find a bunch of chipping debris from making stone tools, we can say, 'Hey, somebody sat right here and was working on their tools,' but we can't really say that until we look at everything."

While all of the dirt at the site was screened through metal mesh that was 1/4" wide, a few more soil samples will be screened through 1/16" inch mesh with water in an attempt to recover other tiny artifacts.

"I'm certainly satisfied with what we found," he said.

20 photos to remind you how beautiful Nebraska is

Grasshopper and a bee

Copyright 2019 The Associated Press. All rights reserved. This material may not be published, broadcast, rewritten or redistributed.

Filmmaker Andrew Troy wasn’t familiar with the story of Chief Standing Bear when he began reading “I Am a Man,” Lincoln author Joe Starita’s a…

Nebraskan restores Model A, finds out it can't be licensed

For eight decades, the names designating meeting and conference rooms inside the Nebraska Union lacked imagination.

Volunteers move dirt back into a hole at the History Nebraska excavation site near Courthouse Rock in Bayard. It was a chance for members of the community to join archaeologists in trying to uncover missing pieces of the region's past.

Kirsten Huddleston carries buckets across the field next to Courthouse Rock during History Nebraska's public excavation in celebration of Nebraska Archeology Month. Huddleston had wanted to attend an excavation a couple years ago, but couldn't make it. She jumped at the chance to participate this year.