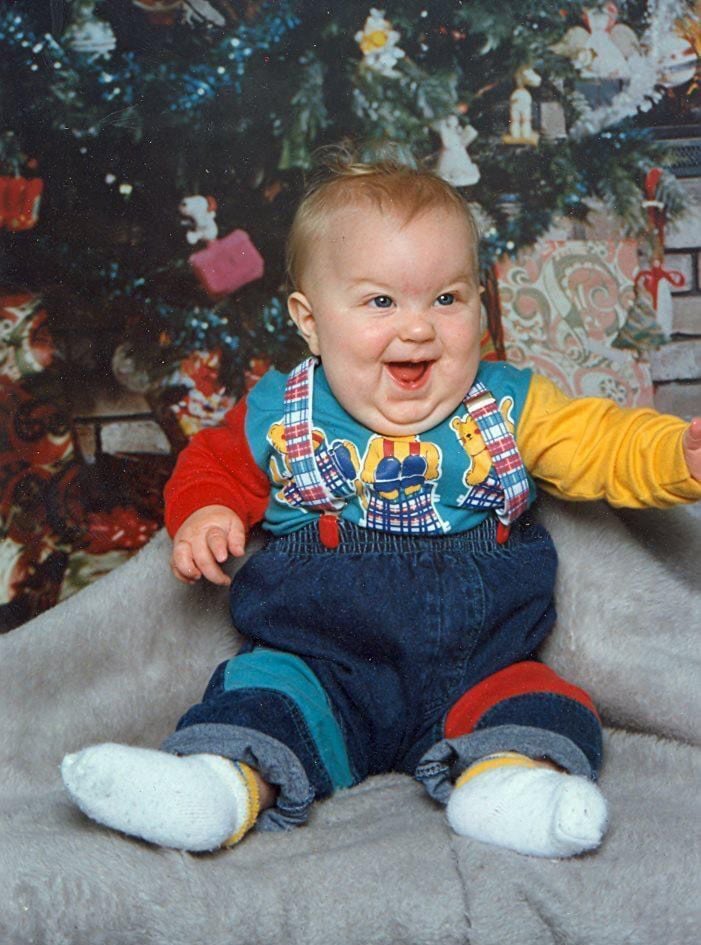 A few weeks ago, Schuyler Sharp of Fullerton posted this photo on Reddit — a baby face only a mother could love. He just wanted to make people laugh, Sharp said. And, boy, did they. 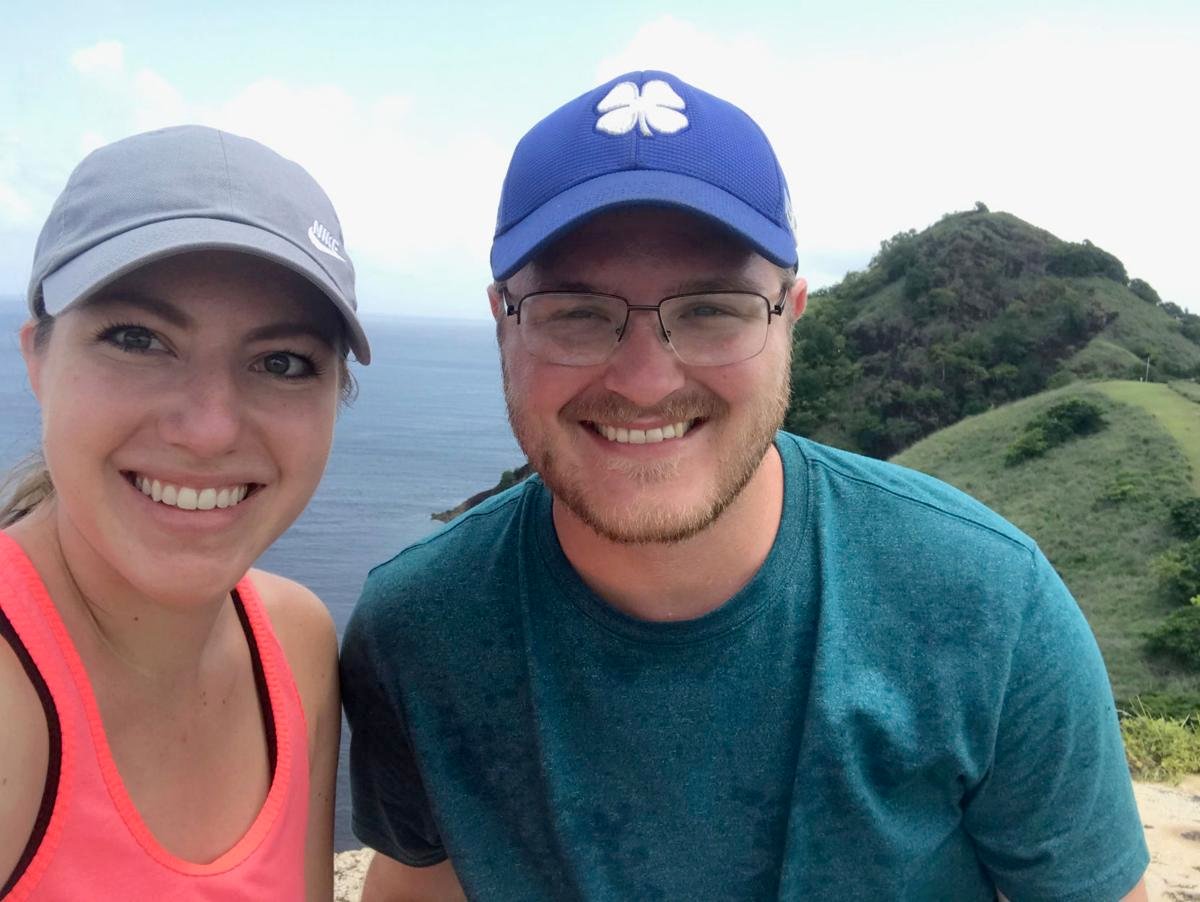 Schuyler Sharp with wife Katie on vacation in St. Lucia last summer. A few weeks ago, Sharp, 27, posted an ugly baby picture to Reddit with the caption "The only baby picture I have ... wonder why? The post went viral with many commenters wondering what he looks like now.

The ugly baby photo had already gotten a lot of mileage.

Schuyler Sharp once put it up as his Facebook profile photo — the 27-year-old Fullerton native at 5 months, posing under a Kmart Christmas tree, wearing baby blue jeans held up with checkered suspenders and a shirt in all the colors of a crayon box.

He had a double chin and no neck. He had a middle-aged-man look about him, pasty and pompous. A little John Candy. A bit like Chris Farley.

His friends thought it was funny. They gave him crap about it.

Cindy Lange-Kubick: On hold for unemployment help — 'I've never gotten to speak to anyone'

One Christmas, Sharp even framed that picture and put it in the pile for the white elephant gift exchange.

And a few weeks ago, the accountant studying for his CPA exam posted it on Reddit.

It was a Monday.

“I was bored, and I didn’t want to study,” Sharp said earlier this week. “So I was looking through all my old photos on Facebook.”

He’s a semi-regular on Reddit — the website that is home to aggregated news, memes, uncivil commentary, odd photos, endless opinions. It calls itself the Front Page of the Internet, and thousands of people the world over have eyes on it every day.

Sharp sometimes scrolls through the “subreddits” — online communities for specific locations, such as Lincoln, or specific topics, such as golf (which Sharp loves) and for funny photos and videos — bears dancing, two guys playing soccer with a bowling ball, mean Nicki Minaj memes.

That’s where he posted the photo of his baby self. He added a caption: The only baby photo I have ... wonder why?

A brief moment of internet fame.

“It’s just a silly picture,” Sharp said. “I knew people on Reddit would destroy it.”

So he wasn’t offended when he was called Jabba the Hutt. Or Yoda. Or compared to Farley — “This baby is living in a van down by the river!” — or Candy as “Uncle Buck” or Norm from “Cheers.” Or Winston Churchill. Or John Lithgow playing the part of Winston Churchill.

“Don’t let the several hundred ridiculing comments get you down,” someone wrote. “Pick your chin(s) up and be proud.”

Sharp is married. His wife, Katie, is an attorney in Albion. They live in Fullerton, where he grew up the youngest of three boys.

He isn’t chubby anymore. He has a neck. And dimples. He says he’s “a really average-looking dude.”

But he has a sense of humor and so does his mom, who checked out her son’s post on Reddit as the roasting of the baby-photo-only-a-mother-could-love rolled in.

“One of the more humorous comments is that they didn’t think a baby could look like a pedophile,” Tink Sharp said.

Cindy Lange-Kubick: On hold for unemployment help — 'I've never gotten to speak to anyone'

She didn’t take offense. Not to the comments about the ugly outfit. (“I guess I don’t have good fashion sense.”)

Or the comparisons to questionably attractive adults. ("Are you John Goodman? Fat Bastard? The Great Goblin in 'The Hobbit'?")

The photo made his head look bigger than it was, Sharp’s mom said. Kmart didn’t give her many poses to pick from.

“He didn’t really look that bad. I could show you all kinds of pictures of him — he turned out to be a really nice-looking guy.”

And she must have been fond of the photo at some point. Say in 2011, the year Schuyler graduated from high school, and she included it in the senior class slideshow. A tradition at Fullerton High in which a baby photo of the graduate flashes on the screen and morphs into a senior portrait.

Schuyler was just as surprised as the rest of his 28 classmates when that Kmart photo showed up on the screen and turned into his own face.

Having it blow up on Reddit was just the luck of the moment.

“It was cool, and I enjoyed it,” the future CPA said. “It doesn’t mean anything.”

It was just a way to make people laugh in a world where there seems to be less and less to laugh about, and Sharp was happy to do his part.

But in the big picture of the Life of Schuyler Sharp, former funny-looking baby?

“I hope that’s not my highlight. It might be, but I hope not.”

Not the way they imagined walking to school

Easton (right), and his best buddy, Austin, from across the street

First day of kindergarten at Eastridge

3rd and 1st grader.... Little brother is pretty excited about this

Deacon and Aubri 2nd and 3rd

Watch Now: Seven languages, one message: I wear because I care

A group of Community Breastfeeding Educators found dads from their cultural communities to share a pandemic safety message with their fellow dads to help keep families free of the virus.

Cindy Lange-Kubick: Losing your parents during a pandemic and finding peace in the process

Van and Georgia Duling of Lincoln both died during the pandemic, but their youngest daughter found peace in the changed relationship and gratitude for caregivers

When she called that Friday in May, Janell Schutte could tell something was wrong.

Cindy Lange-Kubick: The Monarch Midwife and a butterfly named Barack

A Lincoln woman is helping monarch butterflies — whose habitat is threatened and whose numbers are dwindling — take flight. And this year, she's sending them off with the names of her heroes.

Cindy Lange-Kubick: Masked-up for soccer to save their season, their families and their community from COVID-19

Four Lincoln select soccer teams are wearing masks to practice and to play, their contribution to keeping Lincoln safe during the pandemic.

Cindy Lange-Kubick: Catching up in a changing world

Columnist Cindy Lange-Kubick gives readers a postscript on some of the people who filled her columns in the last year.

A Papillion P.E. teacher got a lot of love for his paper replica of Memorial Stadium last November. Now Trey Ashby is up to 17 stadiums, some selling for as much as $2,000.

One Lincoln woman's walks in Tierra Park reflect what many are doing during the pandemic — noticing the world around us.

100 days of art: 'The Earth was falling apart from COVID … it was the perfect opportunity to try it.'

A Lincoln mother and son found a way to make art together during the quarantine and celebrated with an outdoor art show Saturday night.

A few weeks ago, Schuyler Sharp of Fullerton posted this photo on Reddit — a baby face only a mother could love. He just wanted to make people laugh, Sharp said. And, boy, did they.

Schuyler Sharp with wife Katie on vacation in St. Lucia last summer. A few weeks ago, Sharp, 27, posted an ugly baby picture to Reddit with the caption "The only baby picture I have ... wonder why? The post went viral with many commenters wondering what he looks like now. 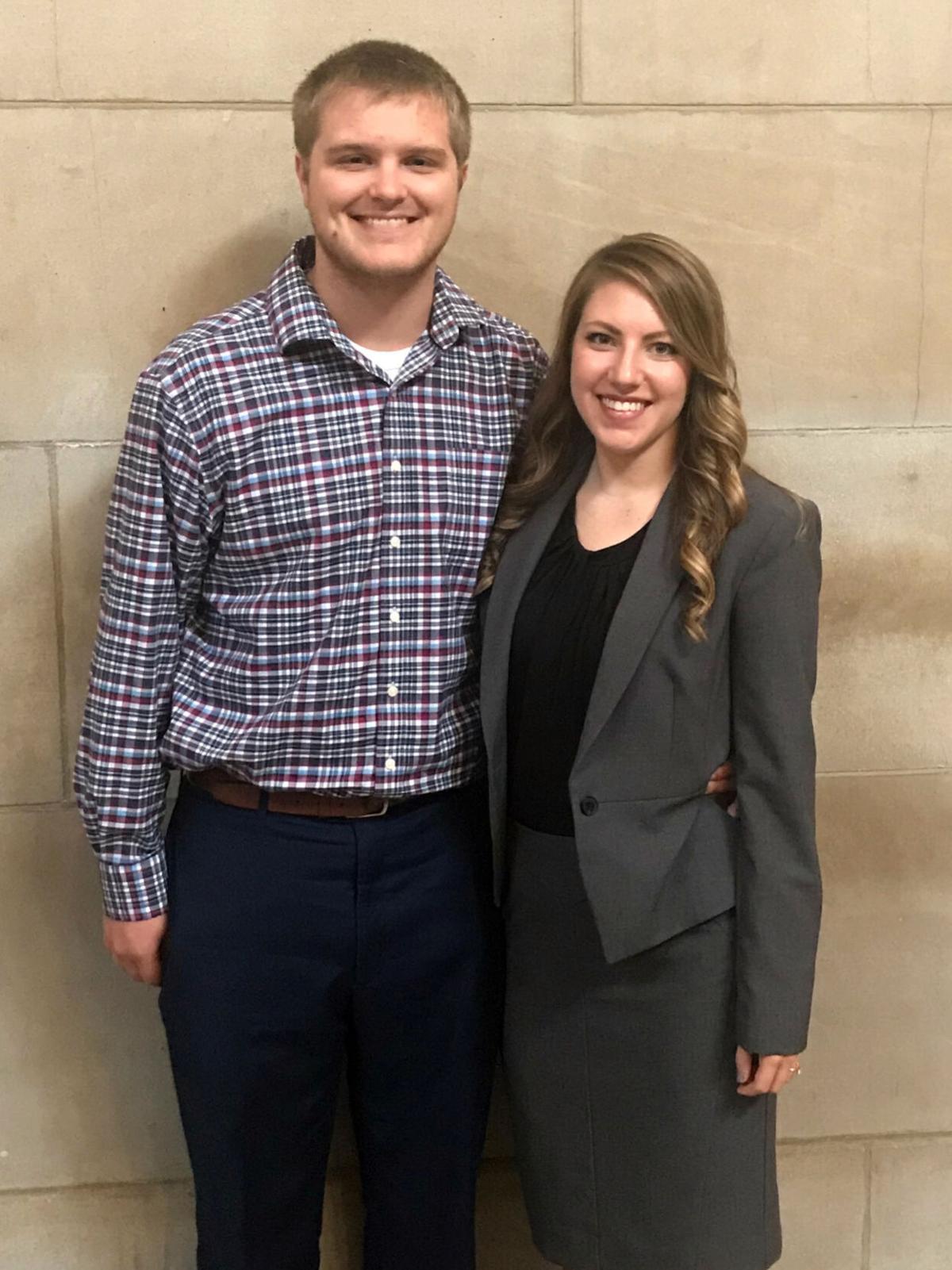 Schuyler Sharp with wife Katie Sharp posted a funny baby picture to Reddit and it went viral. "A lot of people had a good laugh about it," he said.