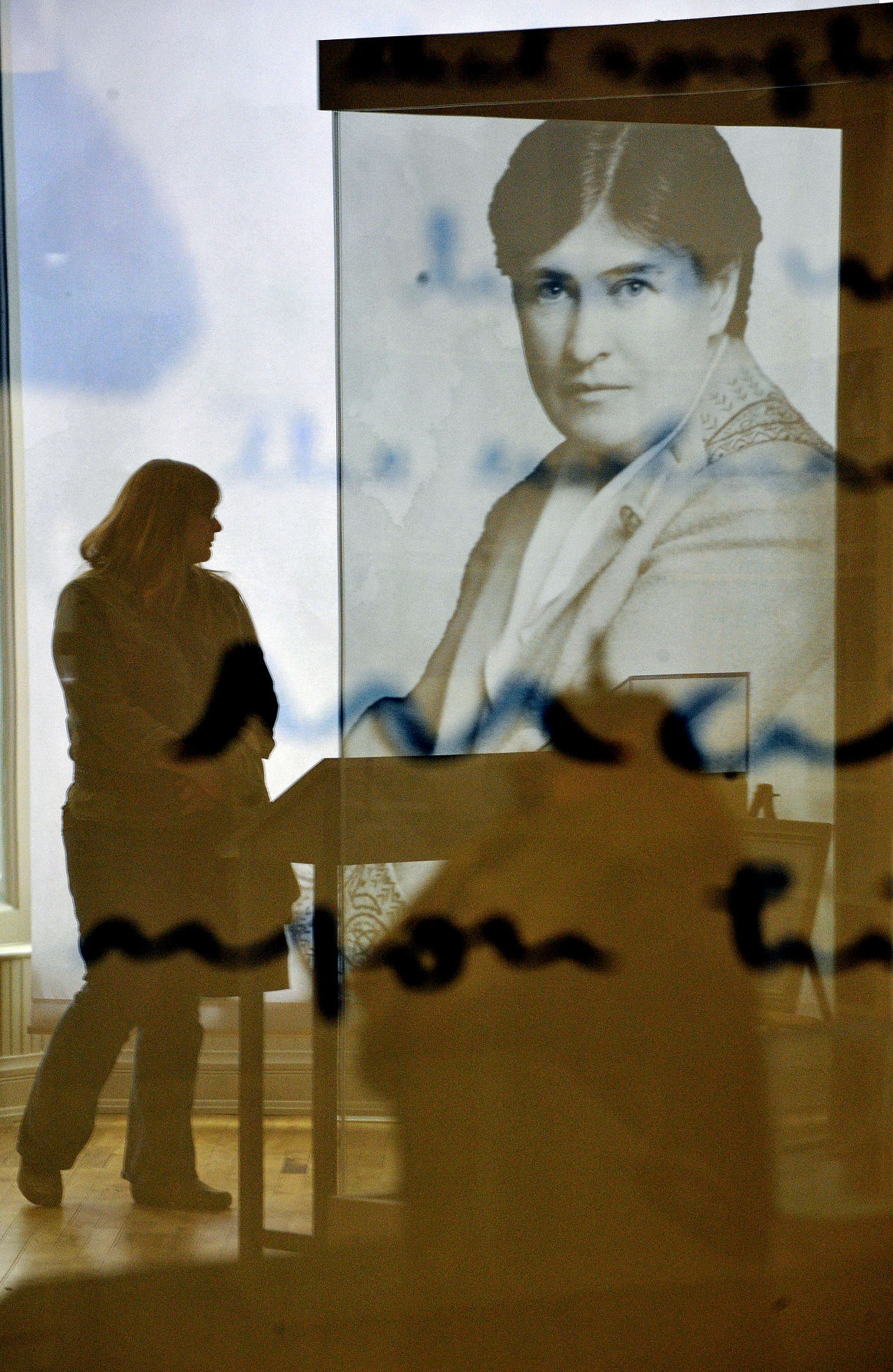 A visitor, a photo of Willa Cather and Cather's handwriting are all visible in the reflections of a display case at the new National Willa Cather Center in Red Cloud. 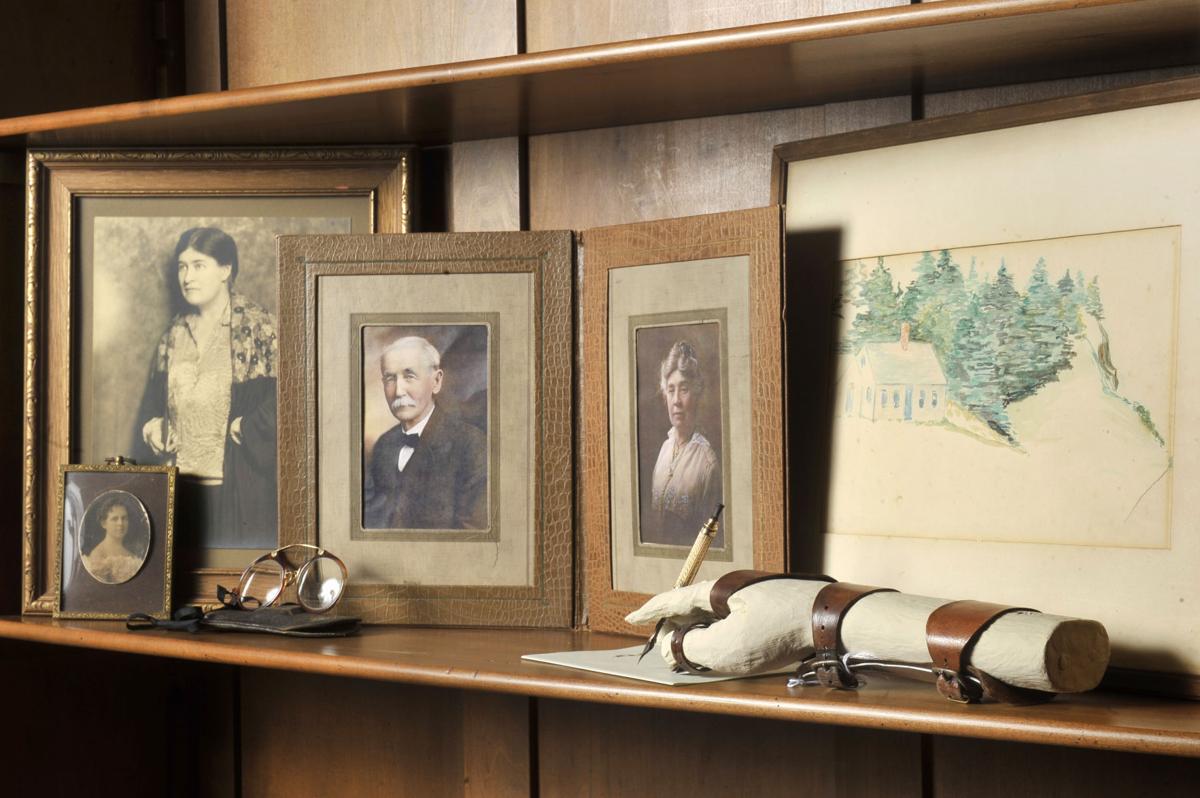 Personal belongings are arranged on a desk that was owned by Willa Cather at the new National Willa Cather Center in Red Cloud. 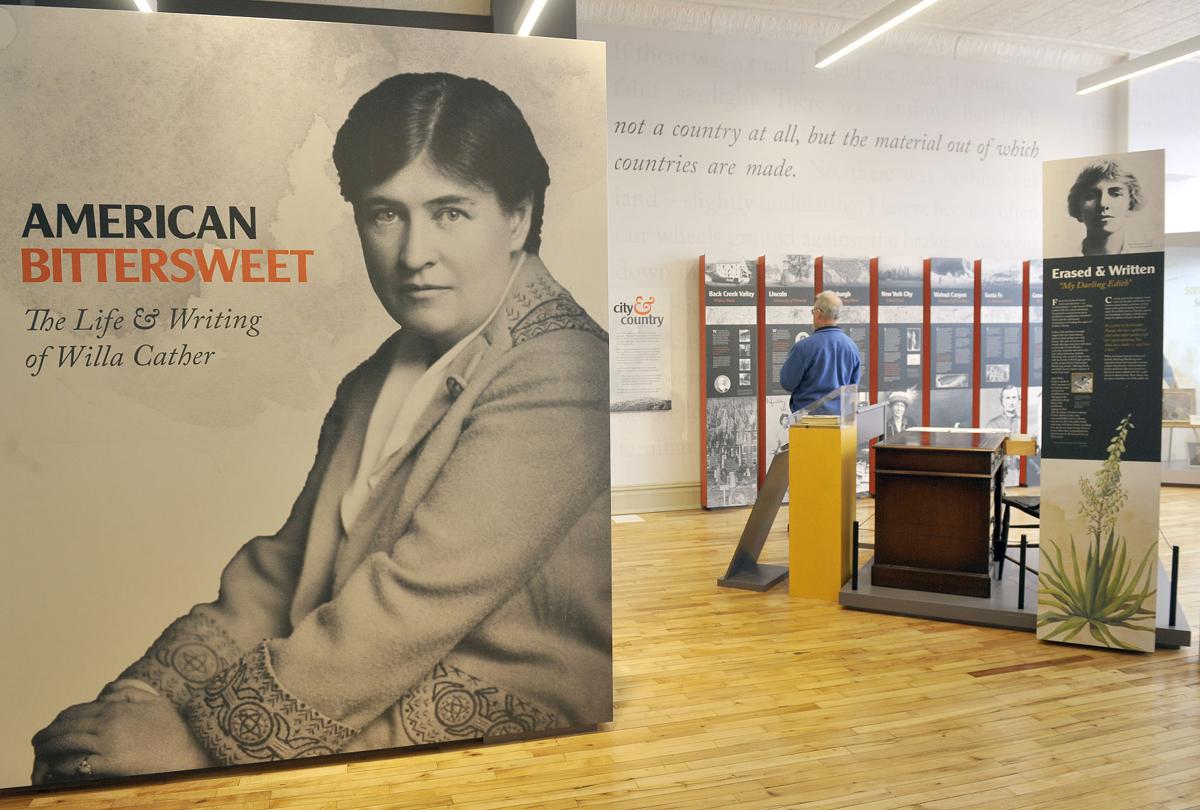 A visitor takes in one of the displays at the new National Willa Cather Center in Red Cloud. 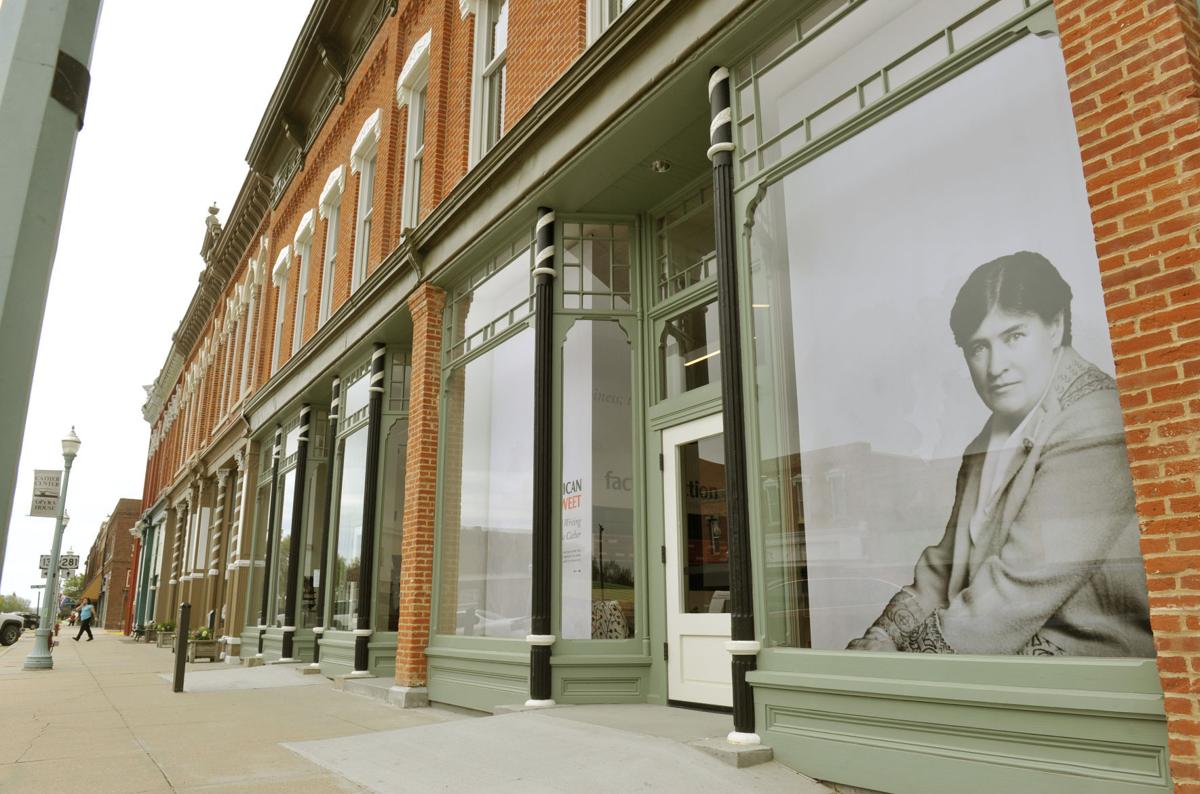 A portrait of the author looks out onto North Webster Street at the National Willa Cather Center in Red Cloud.

RED CLOUD — Gathered with friends around a kitchen table six decades ago, Mildred Bennett started the Willa Cather Pioneer Memorial and Educational Foundation with eight others in Red Cloud, the town that serves as an important backdrop to the author’s work.

The museum dedicated to Nebraska’s most famous author has undergone several transformations in the 62 years since, moving into bigger spaces in the town of 1,000 and acquiring 10 properties tied to Cather’s time in Nebraska.

The foundation will celebrate its latest iteration next month with the opening of the National Willa Cather Center, the culmination of a five-year effort that saw the restoration and renovation of a two-story building overlooking the brick-laid street in downtown Red Cloud.

Once opened, the new center will connect with an opera house converted into offices, an art gallery and performing arts center the Willa Cather Foundation has occupied since 2003.

“This was a vision that started with our founder, Mildred Bennett, and the volunteers on the first Board of Governors of the foundation,” said Ashley Olson, a Red Cloud native who now serves as the executive director of the Willa Cather Foundation.

The Moon Block, the two-story building finished in 1886, will now feature a new exhibit detailing the life and writing of Cather on the first floor, as well as an expanded archive of the author’s works and belongings on the second floor.

Laura Bush, who brought Cather's works to the White House as part of her “Salute to American Authors” series, will be on hand for the center’s June 3 grand opening as a guest speaker.

The former first lady, who has been a friend of the Cather Foundation for several years, said Cather “gives voice to the values that define America’s frontier heritage.”

“By reading her words and promoting her contributions to western culture, we commemorate the pioneering spirit that distinguishes us as a nation,” she said.

This year’s conference, “Picturing the American West: The Railroad and Popular Imagination,” will feature Brent Glass, director emeritus of the Smithsonian’s National Museum of American History, and Ann Satterthwaite, a Washington-based city planner who has written extensively about preserving the environment and culture of small communities.

The event has been designated a signature event of Nebraska Statehood 150, according to Regan Anson, executive director of the sesquicentennial celebration.

Cather’s legacy as a novelist, journalist and short story writer has continued to grow around the globe, according to Guy Reynolds, director of the Cather Archive at the University of Nebraska-Lincoln.

For many years, critics labeled Cather as a regional writer, Reynolds said, but over time her place in American literature has expanded.

“Cather was a Nebraska writer, but she’s also a national writer,” Reynolds said. “If she was just a Nebraska author, she wouldn’t have the status that she has.”

Each of Cather’s 12 novels remain in print and Red Cloud’s most famous daughter still graces college reading lists while continuing to sell 5,000 copies a year in the United Kingdom.

“That’s really not bad for a non-British author who has been dead for 70 years,” Reynolds said. “A lot of living writers would be happy to do that.”

Red Cloud has benefited from the boon of literary tourism sparked by growing interest in Cather and her work.

Visitors from all 50 states and 10 different countries have taken a pilgrimage to Red Cloud, which calls itself “America’s Most Famous Small Town.”

Olson said visitors from France, Japan, China, Taiwan and Mexico have booked tours of the Red Cloud sites that inspired works such as “O Pioneers!,” “The Song of the Lark,” and “My Antonia.”

The renovations to the Moon Block building have created three new storefronts in downtown Red Cloud for entrepreneurs and local businesses. One of those has already been occupied by On the Brix, a wine and craft beer tasting room.

"It's a really unique project," Olson said. "We're honoring Cather's legacy and building an industry around it to help spur economic development and downtown revitalization."

Red Cloud Mayor Gary Ratzlaff said the Cather Foundation and the national center draw as many as 10,000 people annually, explaining the community is also exploring plans for a new downtown motel within walking distance of the Cather Center to accommodate future visitors.

Olson said the Cather Foundation’s goal is to keep promoting the person the Journal Star selected as the most-notable Nebraskan in the state’s 150-year history.

"It's my hope that the Center will become a living memorial to Cather through arts and educational opportunities that bring more attention to her life and legacy and, ultimately, her work," Olson said. "It took 62 years to get here, but we've finally created the archive and museum that Cather deserves."

Omaha superintendent to get raise, more vacation for staying

Mary Alice Riley has long been a reader.

RED CLOUD — The first letter was sent in September.

Nebraska lawmakers are looking for ways to give the state's tourism industry a boost in hopes of attracting more money-spending visitors, but …

A “My Antonia” birthday feast will be held Friday at Peter Pan Park.

A visitor, a photo of Willa Cather and Cather's handwriting are all visible in the reflections of a display case at the new National Willa Cather Center in Red Cloud.

Personal belongings are arranged on a desk that was owned by Willa Cather at the new National Willa Cather Center in Red Cloud.

A visitor takes in one of the displays at the new National Willa Cather Center in Red Cloud.

A portrait of the author looks out onto North Webster Street at the National Willa Cather Center in Red Cloud. 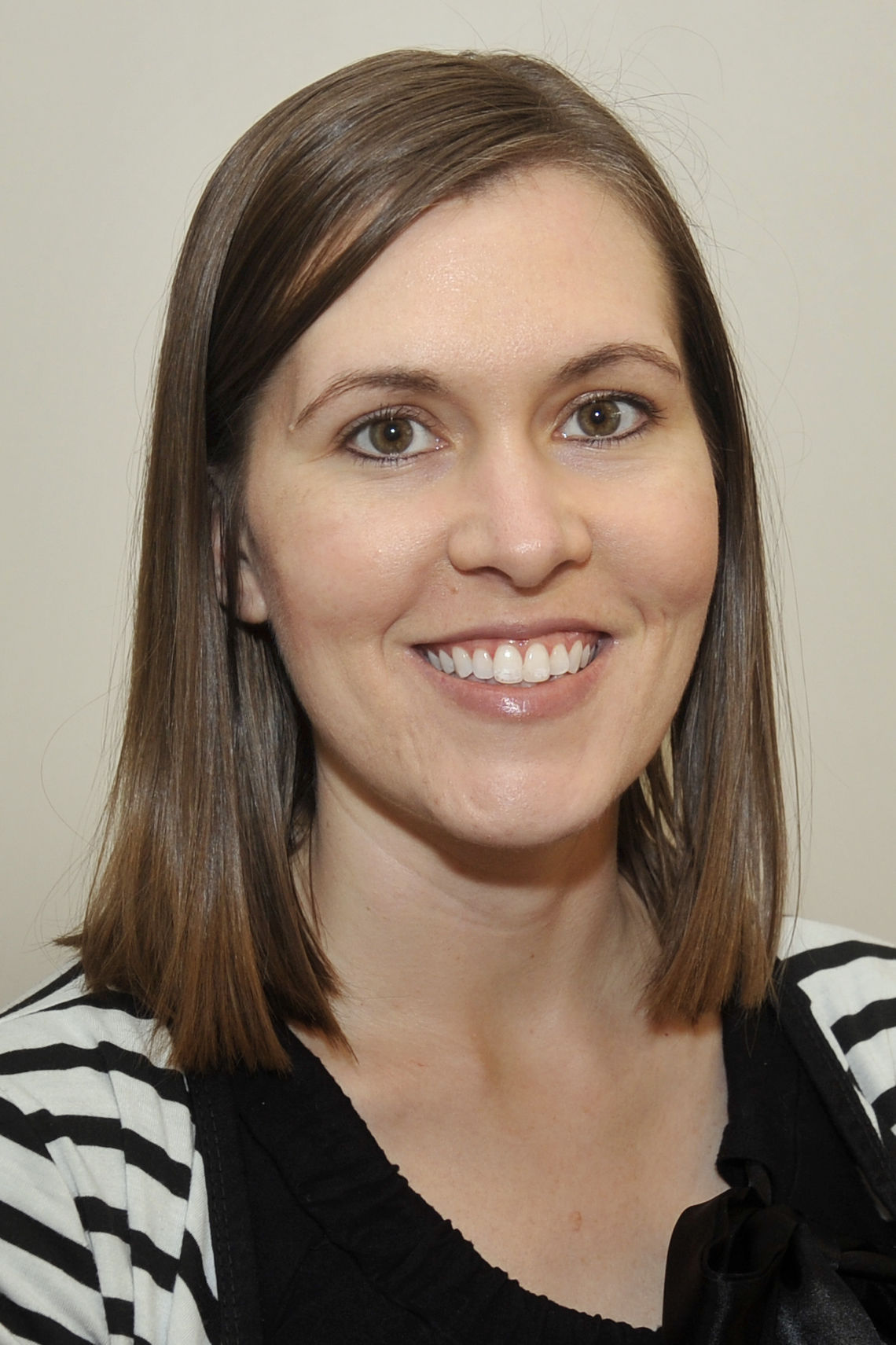