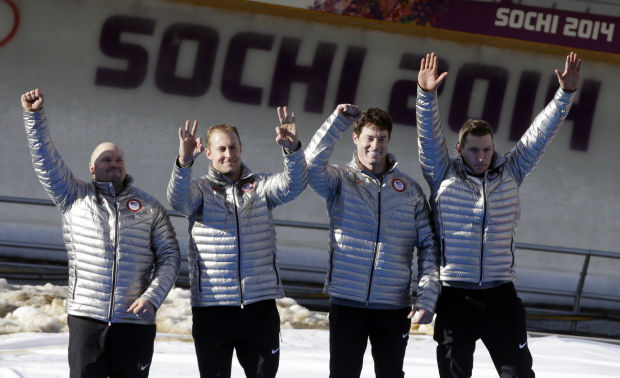 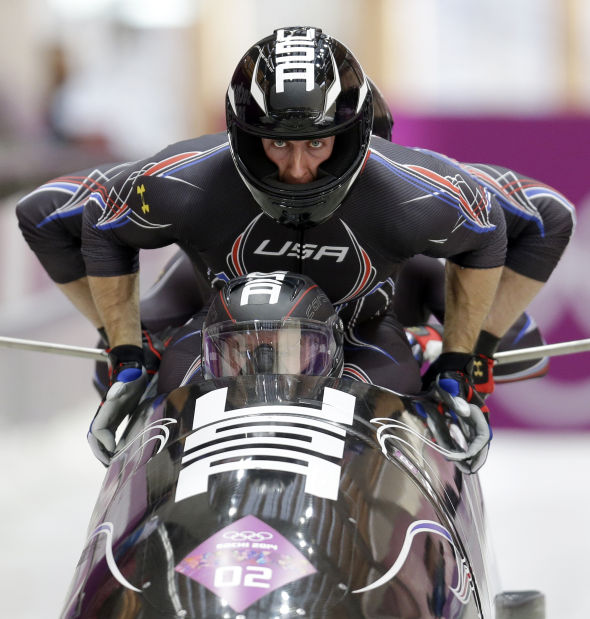 It was 3 a.m. when Dennis and Amy Tomasevicz crawled out of bed and groggily flicked their living room television to NBC. It was 1 p.m. in Sochi, Russia.

The Tomaseviczes had waited, along with the other 700 residents of Shelby, Neb., an excruciating two weeks as other events began and ended. Finally, on the last day of the 2014 Winter Olympics, the final runs of the four-man bobsled competition were about to start.

And finally, there was the Olympian they recognized: Curt Tomasevicz, their son, 2010 gold medalist and hometown hero.

“It’s quite a thrill to see his face and the whole team on the TV,” said Dennis Tomasevicz, a retired mechanic.

NBC scheduled the four-man bobsled finals to broadcast Sunday afternoon, but the Tomaseviczes, still in their pajamas and wrapped in an afghan blanket, were done waiting. Amy Tomasevicz had traveled with her son to Italy in 2006 and Canada in 2010, but couldn’t attend this year's games due to safety and expenses.

Staying home, and seeing other parents cheering on their children in Sochi was “awful,” she said.

Just before finals, her son's team was in fourth place but just 0.17 seconds from the front-runner, and just 0.01 seconds from a medal. And in the final heat -- over as fast as it began -- the USA-1 team snagged the bronze medal with a time of 55.33, beating Russia-2 by 0.03 seconds.

“I told you it would be NUTS! #bronze,” Curt Tomasevicz tweeted after the race.

His parents were elated.

“I was just hoping he could get a medal of some sort,” his father said. “It didn’t have to be gold.”

Shelby isn’t the kind of town that breeds Olympic bobsledders. Amy Tomasevicz said when her sons Jonathan and Curt were children, they had to drive around searching, with limited success, for sledding hills. But Curt was an obvious athlete.

“When he was little, he used to climb barefoot up the inside door frame of our house, like a monkey,” Amy said.

Curt had two goals as a child, Dennis said. One was to play football for Nebraska, which he did from 2000 to 2003 as a walk-on, earning Academic All-Big 12 honors in 2002. The other goal was to bobsled.

“He thought, ‘There ain’t nothing to it. Push it, jump into it and go for a ride,’” Dennis said. “He’s always thought positively.”

That attitude carried Tomasevicz all the way, earning a gold medal in the 2010 Vancouver Games, along with dozens of other international titles. Wherever he’s traveled, he’s been followed by deafening cheers from his hometown.

“Everybody’s majorly supportive of him,” Amy Tomasevicz said. “Even if they hadn’t medaled, they’ve been behind him all the way.”

A weathered sign outside the town says “Welcome to Shelby; Home of the Huskies; Home of Curtis Tomasevicz, USA Olympic Bobsled Team.” Last December, dozens of Shelby residents boarded a charter bus to watch Tomasevicz compete at the World Cup in Utah.

“In a town of 700, you know everybody, and when someone does well, you support them best you can,” Hopkins said. “How many people from the state of Nebraska went to Olympics. Just one, right?”

When small town Nebraskans rally, the excitement is overpowering. On Sunday night, the bar was packed even hours after the race’s scheduled broadcast had finished.

“It’s been crazy,” Hopkins said. “Everyone’s ringing cowbells. We got banners and the whole place decorated.”

Tomasevicz, 33, announced his retirement after Sochi, and as far as his parents know, aside from promotions and speaking engagements, his plans are uncertain. His father said he wouldn’t be surprised if Curt returns to the Midwest for a while.

“He told me, ‘I don’t know, I’m really getting tired of living out of a suitcase,’” Dennis Tomasevicz said.

But mid-June, Amy Tomasevicz is expecting him to pack up a suitcase at least once more. The mother-son duo have a trip to Europe planned, and the art teacher said she is craving conversation with her son, uninterrupted by distance, competitions and training.

Curt Tomasevicz has quit bobsledding, and now considers his future after winning bronze medal is Sochi.