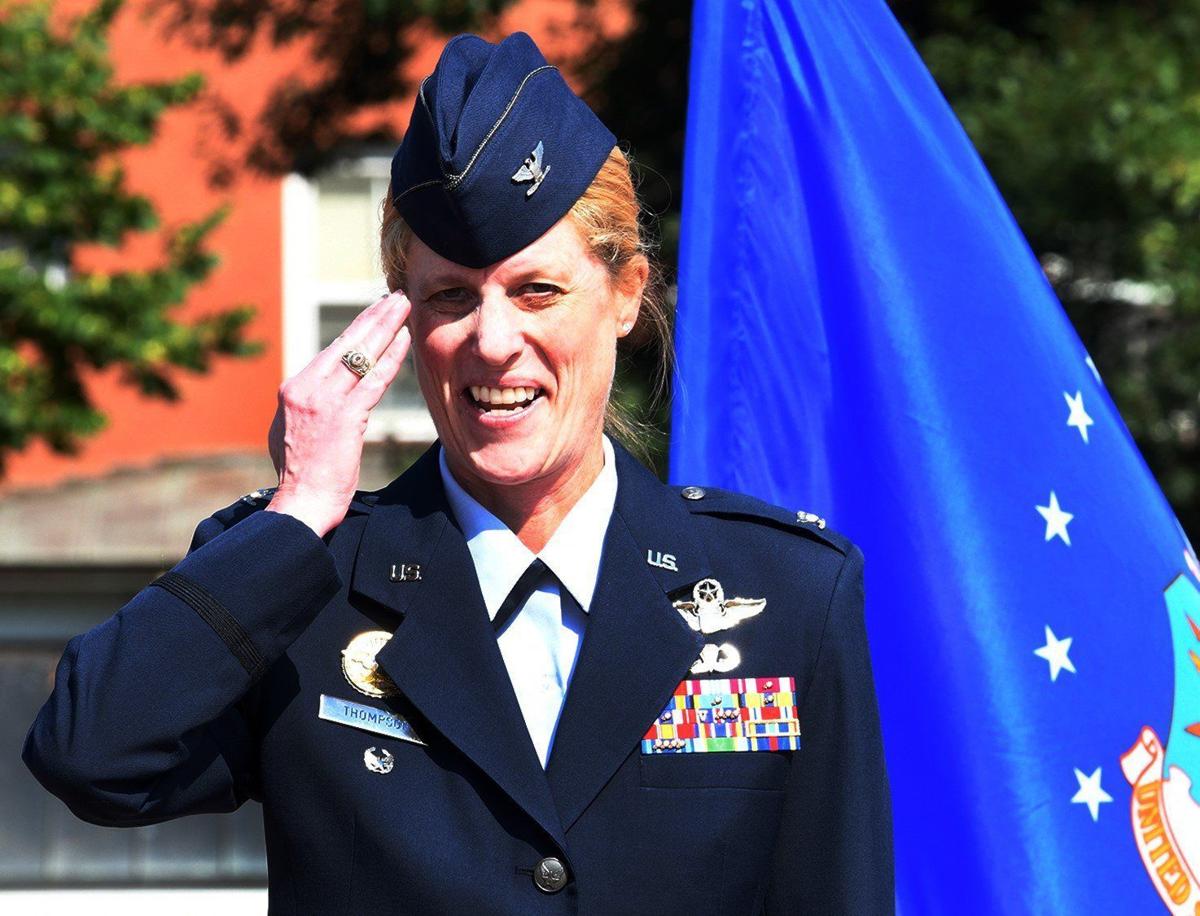 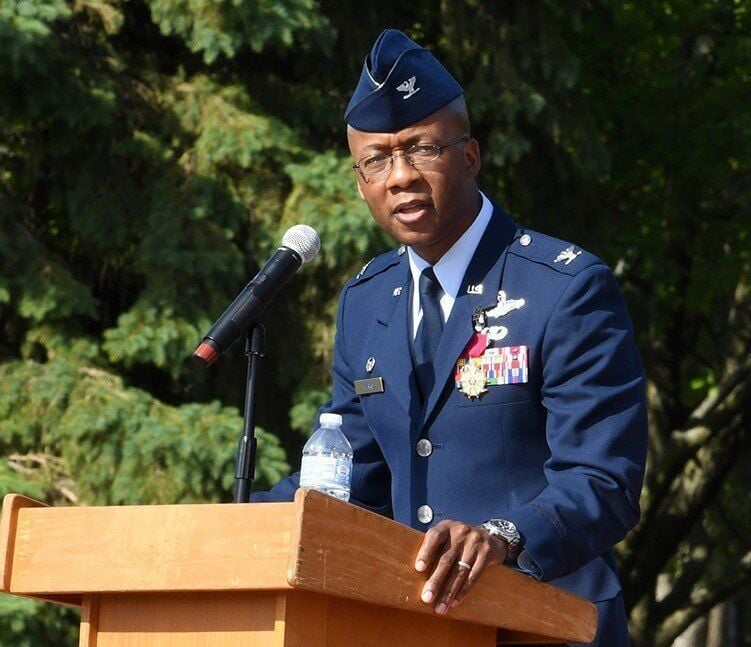 Col. Gavin Marks was the first African American to command the 55th Wing at Offutt Air Force Base

Thompson is the first woman among the 65 officers who have commanded the unit since it was established in January 1941; Marks was the first African American. He led the 55th Wing through a tumultuous time that included the early stages of recovery from the March 2019 floods and the historic COVID-19 pandemic.

“You definitely left your mark on the 55th Wing,” said Lt. Gen. Timothy Haugh, commander of the Texas-based 16th Air Force, who presided over the ceremony.

About 300 people, including Gov. Pete Ricketts, attended the ceremony at the base.

Marks and Thompson are members of the small community of pilots who fly the E-3 Advanced Warning and Control System (AWACS) reconnaissance aircraft. They have known each other for about 15 years, Marks said.

As he handed over command, Marks held Thompson’s arm aloft like a winning prizefighter, then gave her a long hug.

“You were born to lead. And this wing is ready for your leadership,” he said.

Thompson, a 2001 graduate of the Air Force Academy, has accumulated more than 3,400 flight hours, including 600 combat hours in Iraq and Afghanistan.

She holds a bachelor’s degree in biology and a master’s degree in psychology and human relations. She is a graduate of Georgetown University’s Legislative Fellowship program, which included a stint as an adviser to then-Rep. (and now Gov.) Tim Walz, D-Minnesota.

Most recently, Thompson was commander of the 380th Expeditionary Operations Group at Al Dhafra Air Base, United Arab Emirates.

The 55th Wing is the Air Force’s largest, with 33 squadrons, operations groups and two detachments operating RC-135, WC-135, and EC-130 reconnaissance aircraft out of Offutt, Davis-Monthan Air Force Base, Arizona, and several overseas locations. It has been deployed continuously to the Middle East since August 1990.

“I am super-pumped to be part of a mission set that is undoubtedly the gem of the Air Force,” she said. “We are part of a special group of world-class, game-changing warfighters. As I look out, I look forward to the history we will continue to make.”

Thompson will be the third 55th Wing commander to lead during a period of destruction and renewal that is transforming Offutt, remaking a base largely constructed during the 1940s and 1950s into a new facility for the 21st century.

Col. Michael Manion, who led the 55th from 2017 to 2019, saw his command bookended by disasters: an EF-1 tornado that struck the flight line a week after he arrived, causing $20 million worth of damage to aircraft and buildings; and a catastrophic 500-year flood in March 2019 that inundated one-third of the base, destroyed more than 1 million feet of office space, and caused more than $700 million in damage. He oversaw initial recovery efforts.

Marks took over the devastated base less than three months after the flood. He returned the wing to full operations, found temporary office space for more than 3,000 displaced military and civilian workers, and shepherded planning for reconstruction of the base. That included beginning a nearly $200 million reconstruction of Offutt’s runway and the temporary relocation of about 900 personnel to the Lincoln Airport.

At the same time, he coped with the effects of the global COVID-19 pandemic, which meant the wing’s global operations had to continue even with thousands of workers working from home.

Marks will move to an Air Force staff position at the Pentagon.

Now Thompson’s job will be to push forward with the demolition of dozens of ruined structures on the southern part of the base and the construction of eight new campuses while completing the runway reconstruction project and the renovation of the former U.S. Strategic Command headquarters for the 55th Wing.

“It will be awesome to do this together,” Thompson said. “I can’t wait to get started.”

Photos: Offutt Air Force Base through the years

The Egyptian cookbook for the visually impaired

The Egyptian cookbook for the visually impaired

For the past five months, a fleet of construction equipment has been swarming over Offutt’s 2-mile runway, chewing it to bits. The $198 million runway project is about one-third complete and is still expected to wrap up in the fall of 2022.

Should StratCom worry about China's 'Bouncy Castles of Death'?

In the past month, civilian analysts studying satellite images have found two large fields of apparent nuclear missile silos — at least 230 of them — under construction in remote north-central China.

Col. Gavin Marks was the first African American to command the 55th Wing at Offutt Air Force Base