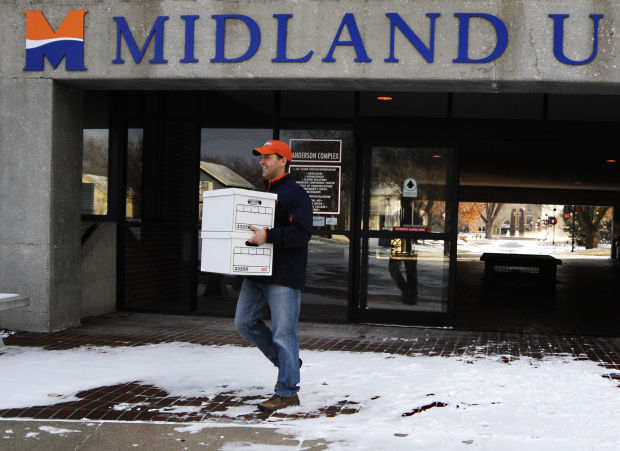 U.S. Sen.-elect and outgoing Midland University President Ben Sasse carries boxes to his vehicle as he cleans out his office in the Anderson Complex last week. 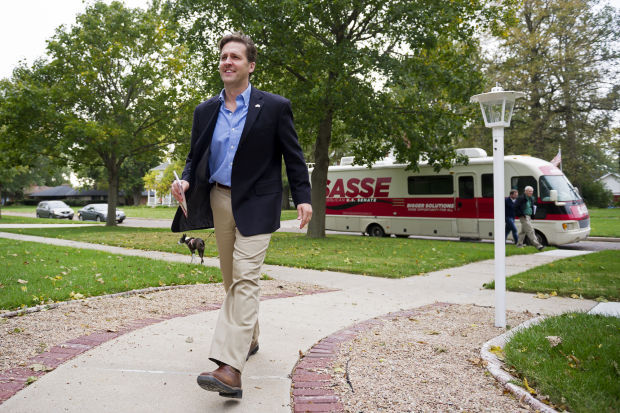 Ben Sasse rode his 19-year-old RV to a Senate victory this year, touring the state in the so-called Benebago. 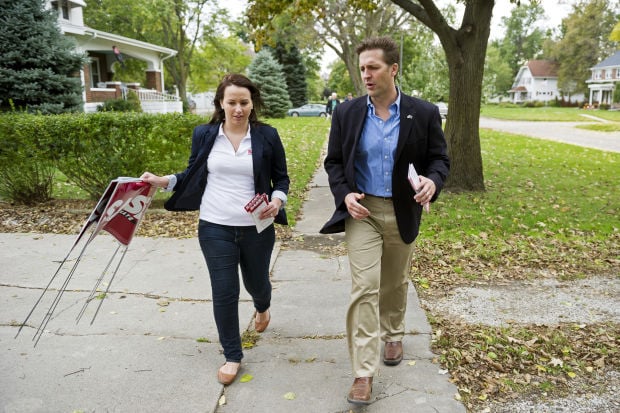 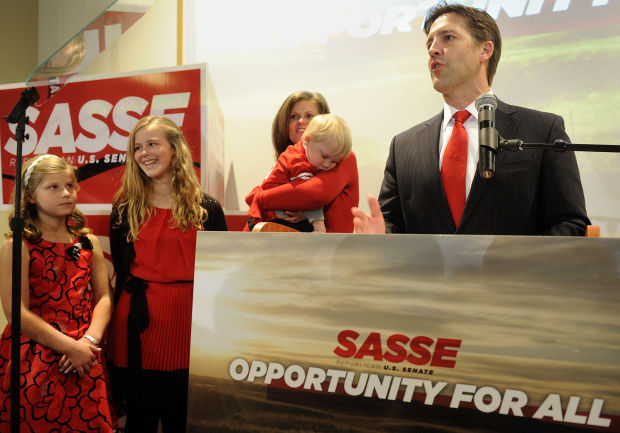 Ben Sasse gives his victory speech as daughters Alexandra (left), and Elizabeth, wife, Melissa, with son Breck, who couldn't stay awake for the big moment, join him on stage in November at the Grand Manse in Lincoln. 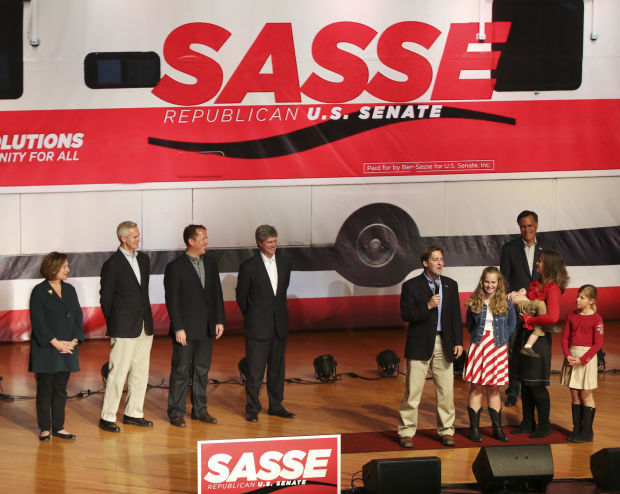 Ben Sasse, U.S. Senate candidate, speaking in October during a campaign stop as part of the "93 Counties, 93 Days" tour at the Hastings City Auditorium in Hastings, was joined on stage by his wife, Melissa, daughters, Elizabeth and Alexandra, and son Breck. Other supporters were (from left) Sen. Deb Fischer, state auditor Mike Foley, U.S. Reps. Adrian Smith and Jeff Fortenberry, and former presidential candidate and Massachusetts Gov. Mitt Romney. 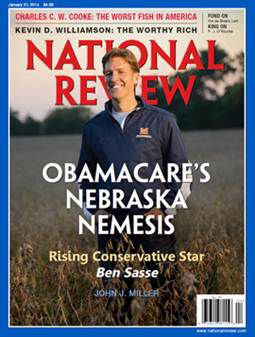 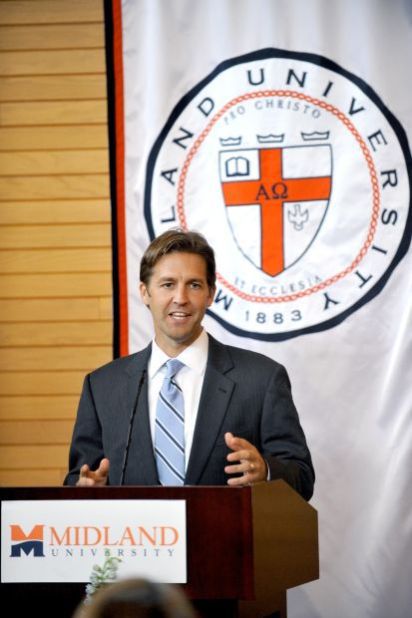 From a household name in his own household and not much beyond to a landslide victory in a wide-open Senate race.

From 3 percent name identification and primary election underdog to Republican nominee and then on to the second-largest victory margin ever compiled in an open-seat Senate contest in Nebraska history.

The anatomy of Ben Sasse's triumph is more a carefully constructed, disciplined, straight-line advance that morphed into a surge rather than a story of twists and turns.

More like the trajectory of a long punt return by De'Mornay Pierson-El than the shifting direction of an Ameer Abdullah touchdown run.

But not nearly as quick. Sasse's touchdown completed a 20-month journey that began with a thought in his head.

A replay would reveal that there was a moment at the beginning of the official 13-month campaign when Sasse placed the decision on whether to continue to proceed in the hands of his neighbors and community leaders in Fremont.

It all began for Ben Sasse the week after Mike Johanns suddenly announced on Feb. 18, 2013, that he would not seek re-election.

That's when the first glimmer of a 2014 bid for a seat in the U.S. Senate first entered the mind of the 41-year-old president of Midland University in Fremont, a guy with a rich pedigree of academic and public policy achievement but no trace on Nebraska's political radar screen.

People couldn't even pronounce his name. And for those who still can't, it's Sass without the "e." And, for the record, he's now 42.

The idea of a Senate candidacy began to crystallize three months after the Johanns announcement when Gov. Dave Heineman, the one potential candidate who would clear the Republican field, said he would not enter the Senate race.

The governor's announcement opened the door wide to all comers and "forced a timetable on me," Sasse says.

Sasse launched a "listening tour" across the state in June and July of 2013 to explore the possibilities and what he heard on that journey was "a big moment for me."

At first, it didn't go that well, Mark Fahleson recalls.

"Ben would come back from small meetings frustrated," Fahleson says. "He said no one knew who he was. And he'd ask: 'How are we going to make this work?'"

And once the campaign moved into town hall meetings that attracted big crowds, Sasse "got all fired up," Fahleson says, and momentum began to build.

Fahleson, a Sasse friend since 2005 when Sasse was chief-of-staff for newly elected Rep. Jeff Fortenberry, was a key adviser from the beginning along with Shelly Blake, a Capitol Hill veteran who worked with Sasse at Midland.

"If there's one conservative that I always have held in high regard, that's Ben," says Fahleson, a former Republican state chairman. "I told people he was the guy."

Ultimately encouraged by his initial statewide foray, Sasse sat down with Fahleson and a few other informal advisers to shape the basic contours of his decision on a whiteboard with four overriding factors or outcomes to consider: win, lose, launch a campaign about big ideas or conduct a small, tactical campaign.

"I was very comfortable with every quadrant but the small campaign," Sasse says.

"A big campaign about big stuff was optimal. Win or lose, I was comfortable with that."

The message was clear, Fahleson says: "He was not going to run a typical sound-bite campaign."

Sasse says he was "hugely encouraged by Nebraskans who told us they were turned off by normal politics," and by the personal stories about what was important in their lives.

And it wasn't Washington.

"I tried real hard to interview Nebraskans and let them talk first," he says. "And I didn't hear Fox News or somebody else screaming their talking points."

It was about family and community and home, their children's futures, closely held values, freedom in their personal lives.

Same priorities as his.

And so Sasse and his campaign built a plan.

"If we are going to do this, we need to get to know every nook and cranny of the state," he says, reconstructing that discussion. "We need to go everywhere. Relentlessly.

Sasse says he had told Melissa that "I can't run if I'm going to miss a whole year of the kids' lives. You need to come with.

"The decision to buy the bus was the strategic choice of the campaign."

Sasse and his wife have three children -- now ages 3 to 13 -- and the family would travel together in the 1995 RV transformed into mobile campaign headquarters, home school and family home on the road.

The campaign bus eventually would be purchased in December.

But first there was a stoplight to confront.

"I was not going to run if I could not raise enough resources," Sasse says.

"I called together the city fathers and mothers of Fremont and told them I would only do this if you think it's a good idea, recognizing that part of it is I would be leaving Midland."

Sasse told them he needed their financial support if he was to move ahead.

There were perhaps a dozen meetings in Fremont in late August and the month of September, with his candidacy contingent on the results.

In the end, the people of Fremont pledged $350,000 or so in separate contributions and that flashed the green light leading to the official announcement of his candidacy on Oct. 7, 2013.

Tyler Grassmeyer, another 10-year friend and Capitol Hill veteran, had been recruited by Sasse in August and ultimately hired as campaign manager in September and he was in Fremont for the launch.

When the Sasse campaign filed its first quarterly financial report, a document whose numbers tend to separate the serious contenders from the also-rans and, in turn, spawn or diminish future contributions, Sasse had raised $835,000.

And that was the largest first-quarter figure for a nonincumbent candidate in the state's history.

In January, he caught a break when National Review, the magazine that reaches and influences conservatives across the country, decided to come to Nebraska to take a look.

"They wanted to do a piece on an atypical candidate, a college president living on a bus and doing town hall meetings all over the state," Sasse says.

"And then they turned it into a cover story."

That splash in the conservative Republican world, with Sasse on the cover depicted as a "rising conservative star," attracted national conservative attention. And money.

Meanwhile, the Sasse campaign decided to spend money on early media in an effort to build voter identification and deliver a message.

On Jan. 3, a TV ad blanketed the state with Ben Sasse cast as "the strongest, most conservative voice."

Sasse hammered away at the Affordable Care Act, cited the need to reform entitlement programs while protecting benefits for retired Americans and those approaching retirement age, and identified national security as a priority.

And he talked about the urgent need for U.S. debt reduction and "constitutional recovery," affirmation of the private sector, local government, the community, the individual.

Sasse stayed relentlessly on message, ignoring efforts by opponents to engage him during debates and sharply limiting his own participation in joint appearances.

Asked to define himself, Sasse suggested "a constructive conservative."

As his funding base grew and saturation TV advertising expanded his reach, and as he continued to tour the state, campaign tracking polls charted his steady move up the ladder and the momentum that was blossoming along the way.

His seven-month primary campaign moved him from that original 3 percent figure to a big win in May over three major opponents. Sasse captured 92 of 93 counties and just under 50 percent of the Republican vote.

At that point, in a crimson Republican state in a nonpresidential year, his election in November was almost certain.

Don Walton, a Husker and Yankee fan, is a longtime Journal Star political and government reporter.

Ben Sasse will be sworn in as Nebraska's newest U.S. senator shortly after the Senate convenes at 11 a.m. on Tuesday.

Finals week. Last chance for the candidates to make their case before Nebraska voters hand out grades on Nov. 4.

U.S. Sen.-elect and outgoing Midland University President Ben Sasse carries boxes to his vehicle as he cleans out his office in the Anderson Complex last week.

Ben Sasse rode his 19-year-old RV to a Senate victory this year, touring the state in the so-called Benebago.

Ben Sasse gives his victory speech as daughters Alexandra (left), and Elizabeth, wife, Melissa, with son Breck, who couldn't stay awake for the big moment, join him on stage in November at the Grand Manse in Lincoln.

Ben Sasse, U.S. Senate candidate, speaking in October during a campaign stop as part of the "93 Counties, 93 Days" tour at the Hastings City Auditorium in Hastings, was joined on stage by his wife, Melissa, daughters, Elizabeth and Alexandra, and son Breck. Other supporters were (from left) Sen. Deb Fischer, state auditor Mike Foley, U.S. Reps. Adrian Smith and Jeff Fortenberry, and former presidential candidate and Massachusetts Gov. Mitt Romney.